Well-known Icelandic folklore tells us about the Deacon of Dark river - Djákninn á Myrká. It is a ghost story and I have always found this one to be particularly scary. Just while writing about it I get chills down my spine.

Top photo: the graveyard at Myrká 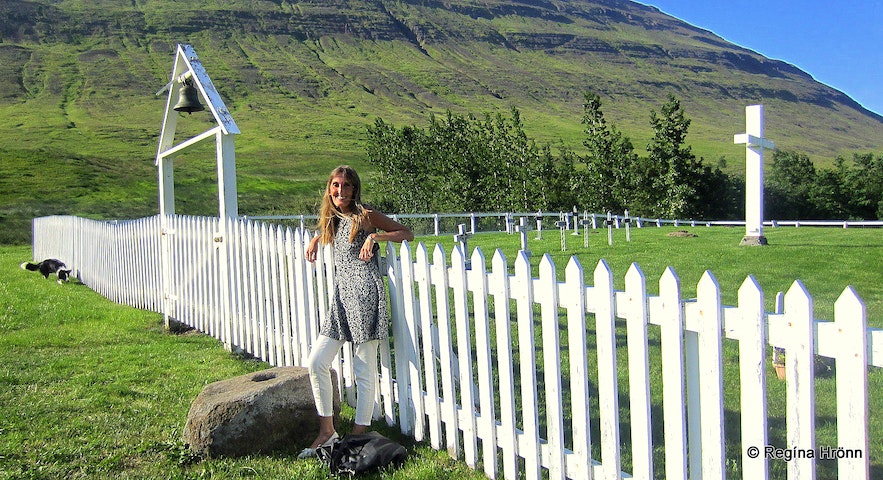 By the grave of the deacon at Myrká

I found this ghost story in Þjóðsögur Jóns Árnasonar - the Collection of Folklore of Jón Árnason and translated it into English:

"There is a farm here called "Myrká" or Dark River. There lived a deacon, who had a girlfriend named Guðrún. She lived on the other side of the Hörgá river on a farm called Bægisá and was the house-maid of the pastor there. One day the deacon crossed the big river on his horse Faxi to meet up with Guðrún, to ask her to join him at a Christmas party at Myrká.

But an accident happened while the deacon was riding back home from discussing the Christmas plans with Guðrún. There had been a lot of snow in the days before the deacon met up with Guðrún. But while he was visiting Guðrún there was a weather change and thaw and melting of the ice in the river. The river could not be crossed due to big chunks of ice. The deacon tried to cross the river on a bridge by Saurbær, which was the next farm to Myrká. The bridge broke and the deacon hit his head on a chunk of ice and drowned. 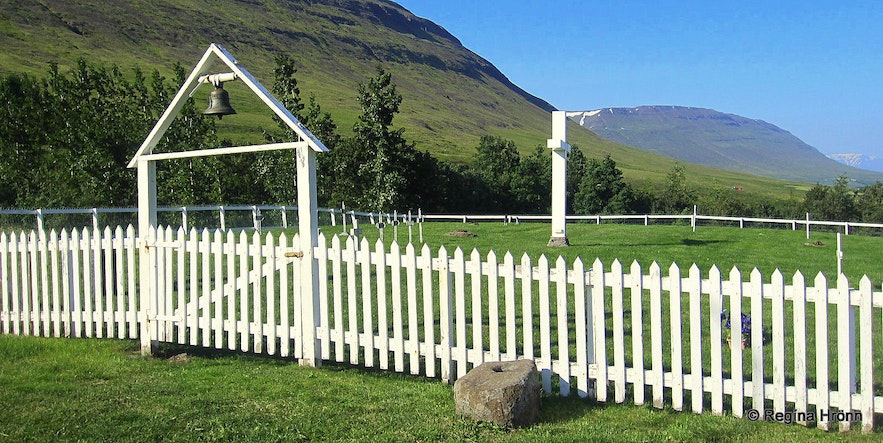 A farmer found the deacon's body the next day and he was buried a week before Christmas. Guðrún didn't hear about the death of her boyfriend as it was not possible to cross the river in this weather, so no news could be brought to her.

So when Christmas Eve arrived the deacon came to pick her up as he had promised. Guðrún had no idea that he was dead. She hurried out to meet him and had only time to put on one sleeve of her overcoat.

They did not talk, but the deacon put Guðrún on the horse behind him. They rode together towards the river Hörgá. The deacon's face was hidden by a hat and a scarf, but as they reached the river the deacon's horse tripped and the deacon's hat fell forward. Now, in my opinion, this is the scariest part of the story, especially if you were to see a drawing of what happened next. Guðrún, who was riding at the back of the horse, saw his bare skull!

The moon was shining through the clouds and lit up his skull! 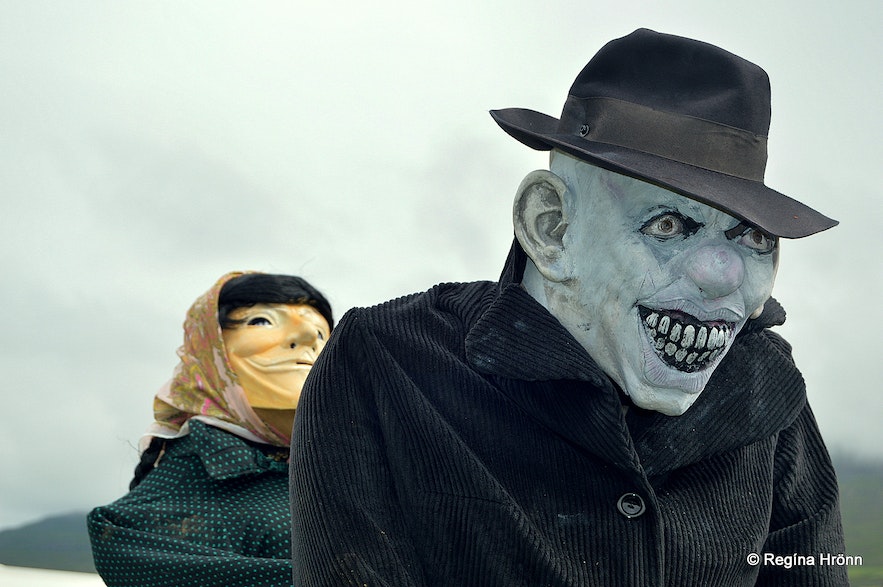 The deacon then said:
"The moon fades, death rides.
Don't you see a white spot
on the back of my head,
Garún, Garún?" 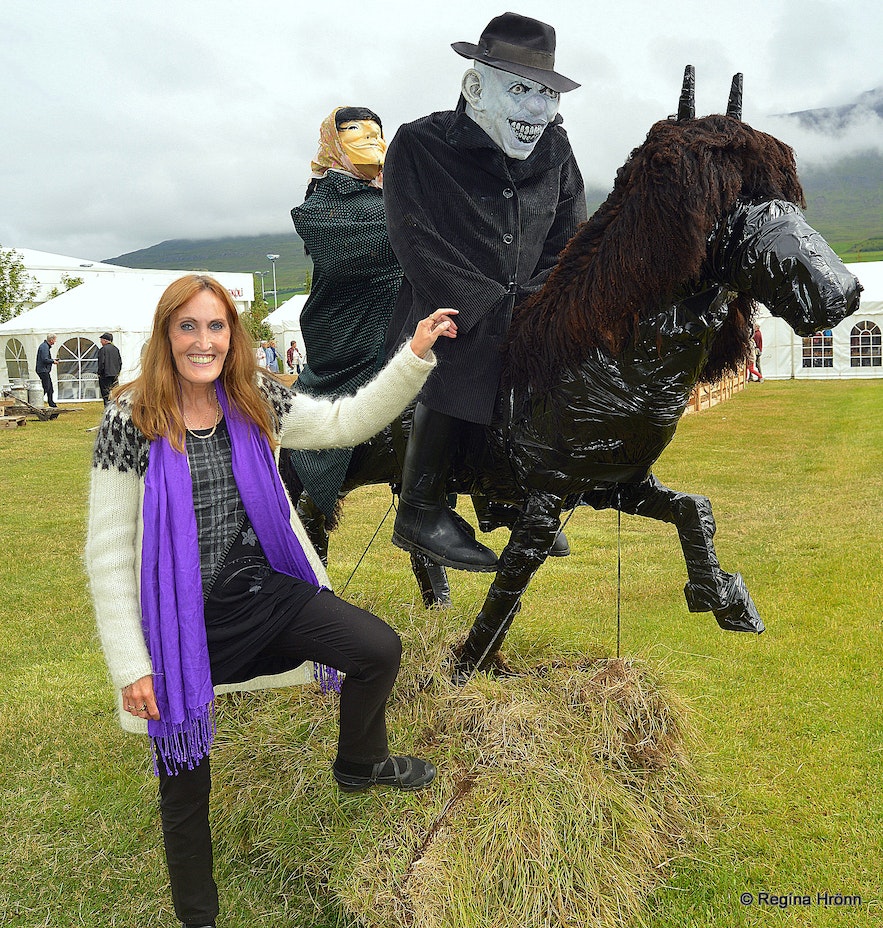 Guðrún and the Deacon of Dark river as depicted at Hrafnagil

Guðrún was frightened and didn't respond. There are different accounts though, some say that Guðrún responded: "I see what is". I don't really believe that she would have responded in this way. They didn't speak until they arrived at the lychgate at Myrká and got off the horse. The deacon said:

"Wait here, Garún, Garún,
while I move Faxi, Faxi (the horse)
over the fence, fence".

The ghost of the deacon called Guðrún Garún after his death. Ghosts cannot utter the words for God and the first part of the name "Guðrún" - "Guð" means God in Icelandic.

Guðrún realized that the deacon must have died and that she had met his ghost. She was so scared that she rang the bell until help arrived from the farm.

Guðrún was then haunted by the deacon's ghost that night and nobody could get any sleep. For a fortnight Guðrún could not be alone and she could not sleep unless somebody was with her. 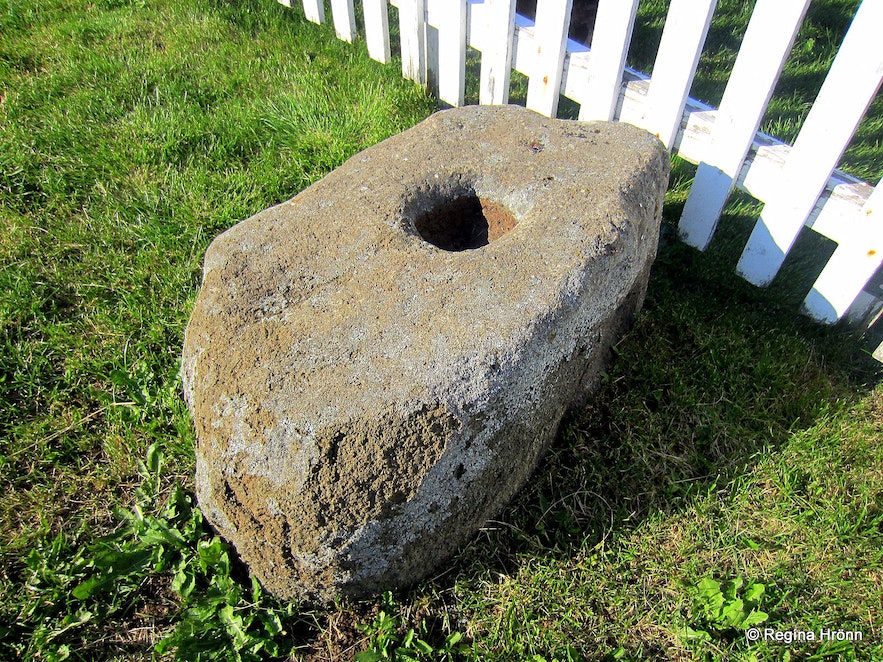 The graveyard at Myrká - the grave of the deacon

A sorcerer from Skagafjörður had to be called in for help. By exorcism, the sorcerer managed to get the ghost of the deacon into the ground and a big rock was put on top. There the deacon rests and the haunting stopped. The rock can be seen by the graveyard.

If you want to visit Myrká you can rent a car in Reykjavík and take road 814 in Hörgárdalur valley. Hörgárdalur is the next valley to Öxnardalur valley through which ring road 1 lies leading to Akureyri. I would advise you to also visit Ytri-Bægisá, where the deacon came to pick up Guðrún. These places are not far apart. 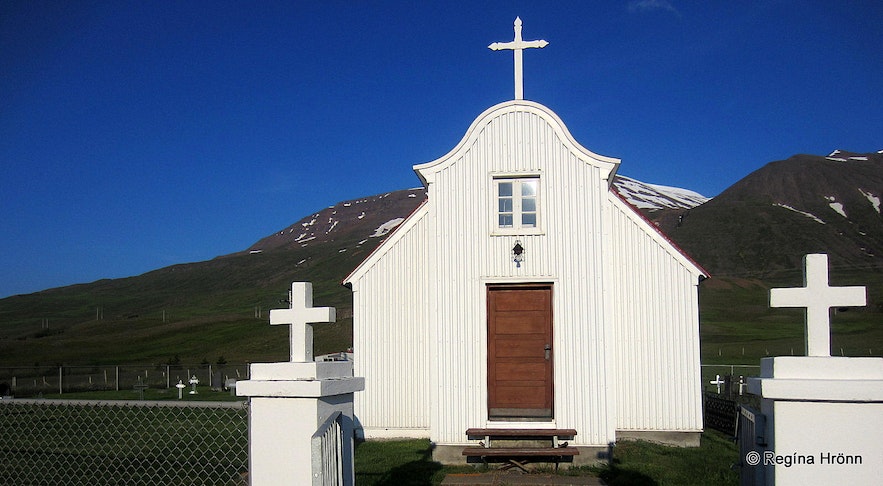 You will find a cute little country church at Ytri-Bægisá. It is a timber church without a steeple, consecrated in 1858. The most note-worthy minister at Bægisá was Rev. Jón Þorláksson (1744-1819), who resided there for 30 years. He was one of the great Icelandic poets. 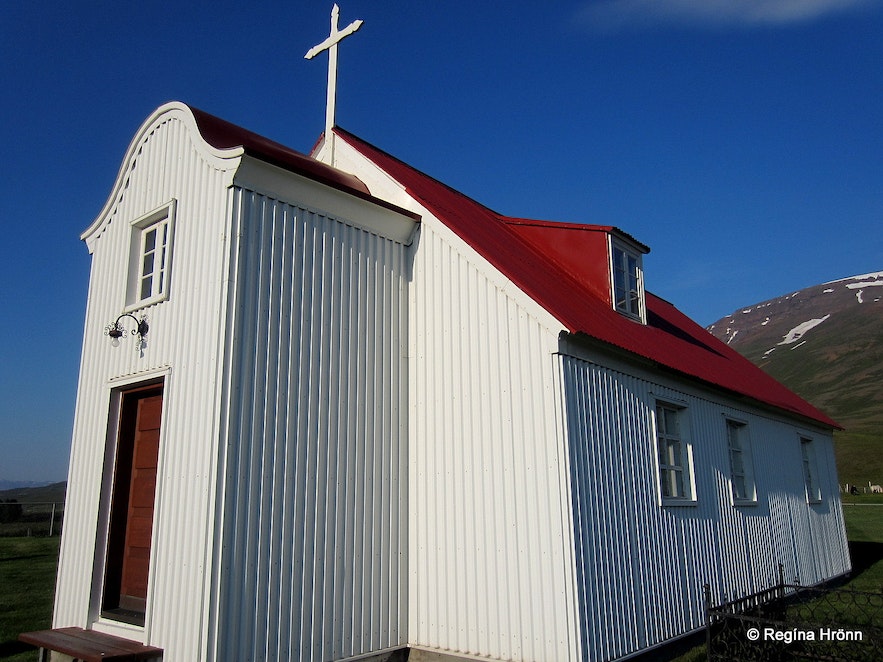 The church is in Hörgárdalur valley by ring road 1 on your right-hand side when driving in the direction of Akureyri. It is 23 km west of Akureyri town. 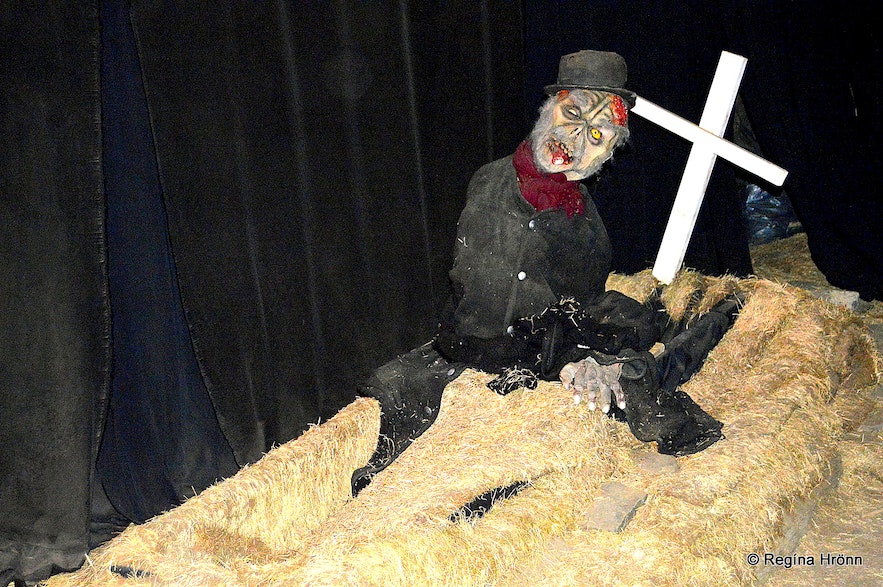 At the Ghost Centre at Stokkseyri village in South Iceland, you can "encounter" the Deacon of Dark river - see my photo above - along with many other scary ghosts from our Icelandic folklore.

There are many ghost stories in Iceland as one can imagine, seeing that the winters here are dark and long. But to me, the Deacon of Dark river has always been the scariest one. I  first read it when I was 11 years old and it still scares me ;) 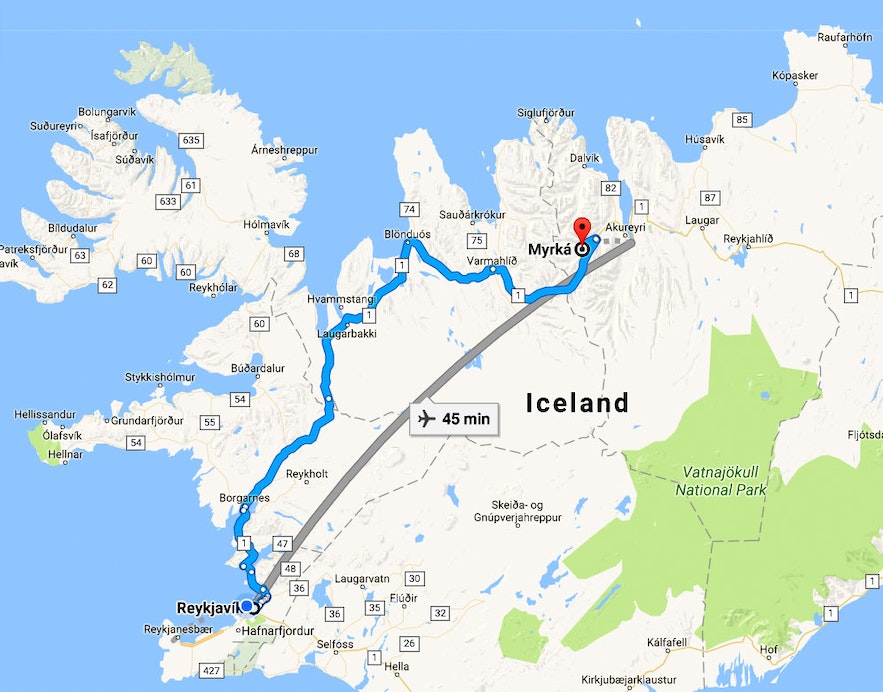 Myrká is located some 367 km away from Iceland's capital city, Reykjavík. 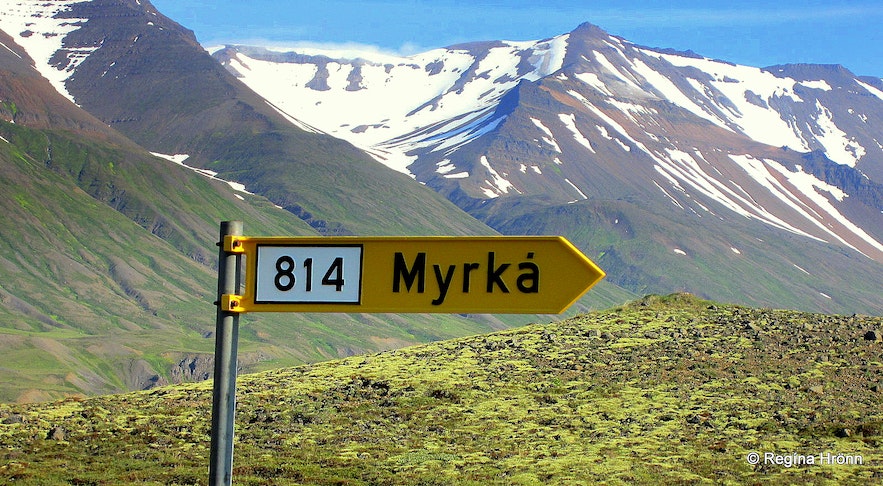 The ghost story about the Deacon of Dark River is of course also included in the Icelandic Mythical Walk | Trolls, Elves & Hidden People which you can join in Reykjavík.

On the tour you will also learn about how to wake up an Icelandic zombie, how to use the infamous necropants, you will see an elf-rock and hear the story behind it and learn much more about the many mythical beings of Iceland. I joined this tour and can recommend it.

The Reykjavík guide told us the story about the Deacon of Dark River in Hólavallakirkjugarður cemetery in the centre of Reykjavík. 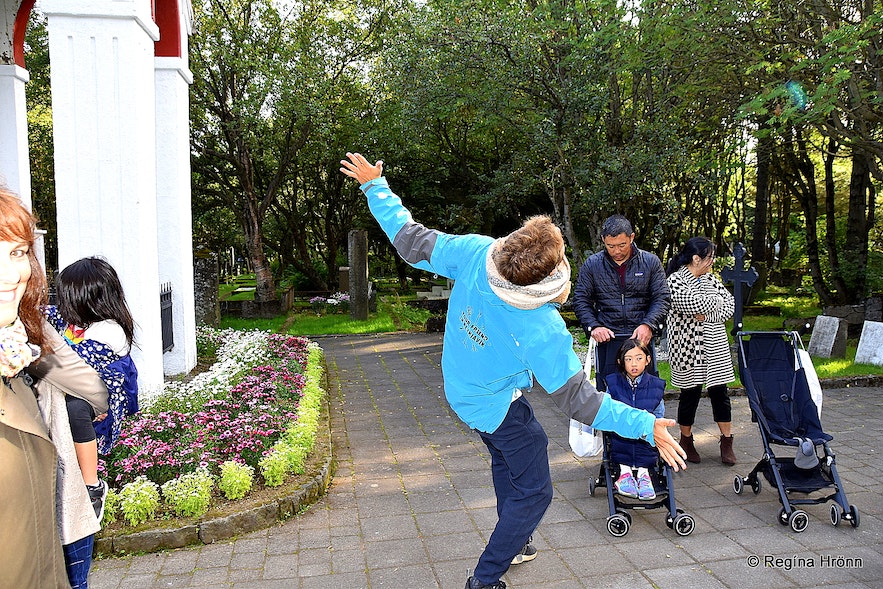 Here our Reykjavík guide is showing us how Guðrún was able to escape as she was only wearing one sleeve of her coat.

This is part IV in my series of travel-blogs on Eyjafjörður fjord - if you want to join me on a tour of Eyjafjörður then I have written a 9-part series on this long fjord:

Have fun visiting the location of Iceland's most famous ghost story ;)