Icelandic folklore is filled with stories about trolls and the hidden people of Iceland.

One such story tells us about the gentle troll Bergþór at Bláfell. It took place in Haukadalur valley, very close to one of the most popular tourist attractions in Iceland, the Geysir geothermal area.

Opening photo: a statue of Bergþór at Bláfell by Geysir 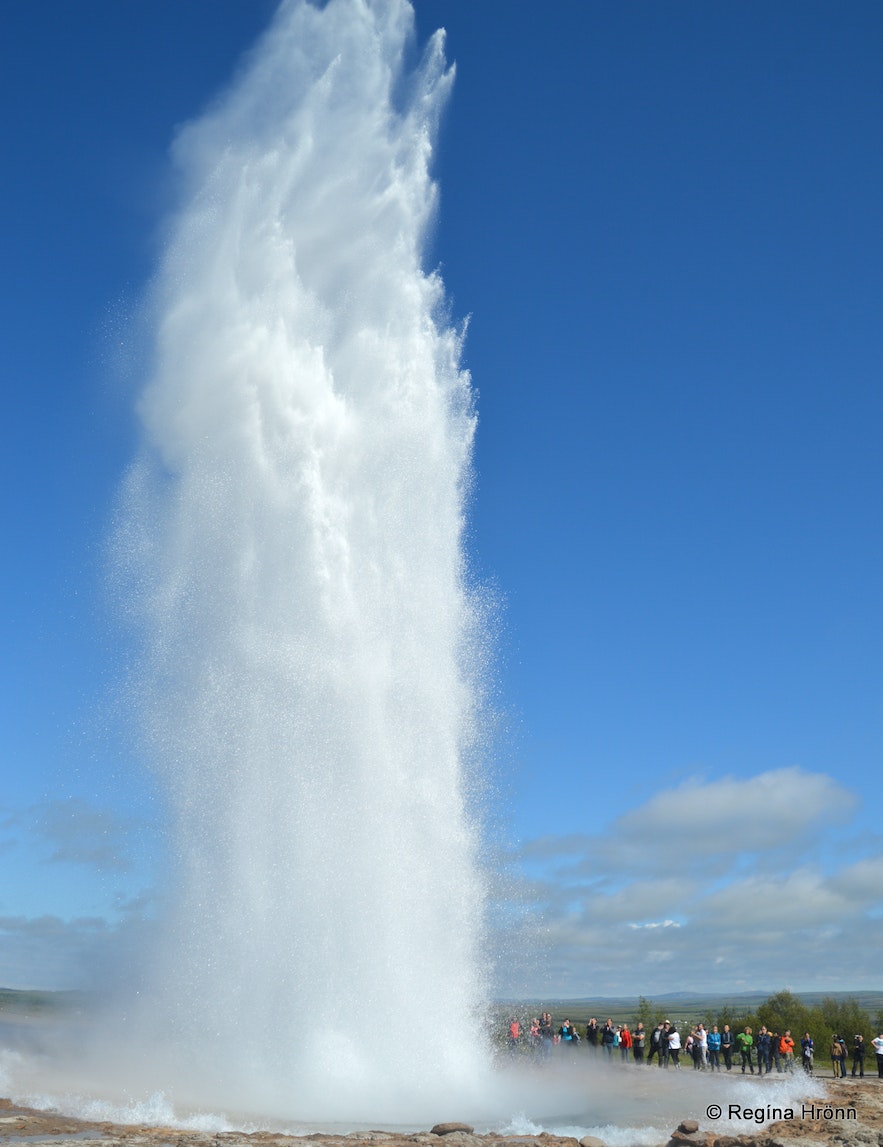 If you have visited the Geysir geothermal area then you might have noticed a wooden statue of a troll.

It used to be in a prominent location with a large bench next to the troll, but it has now been moved to another location close by, and it is much less prominent now, so you might even miss it.

I always have my photo taken with Bergþór when I visit the Golden Circle, which includes the Geysir geothermal area, Gullfoss waterfall, Kerið crater, and Þingvellir national park. 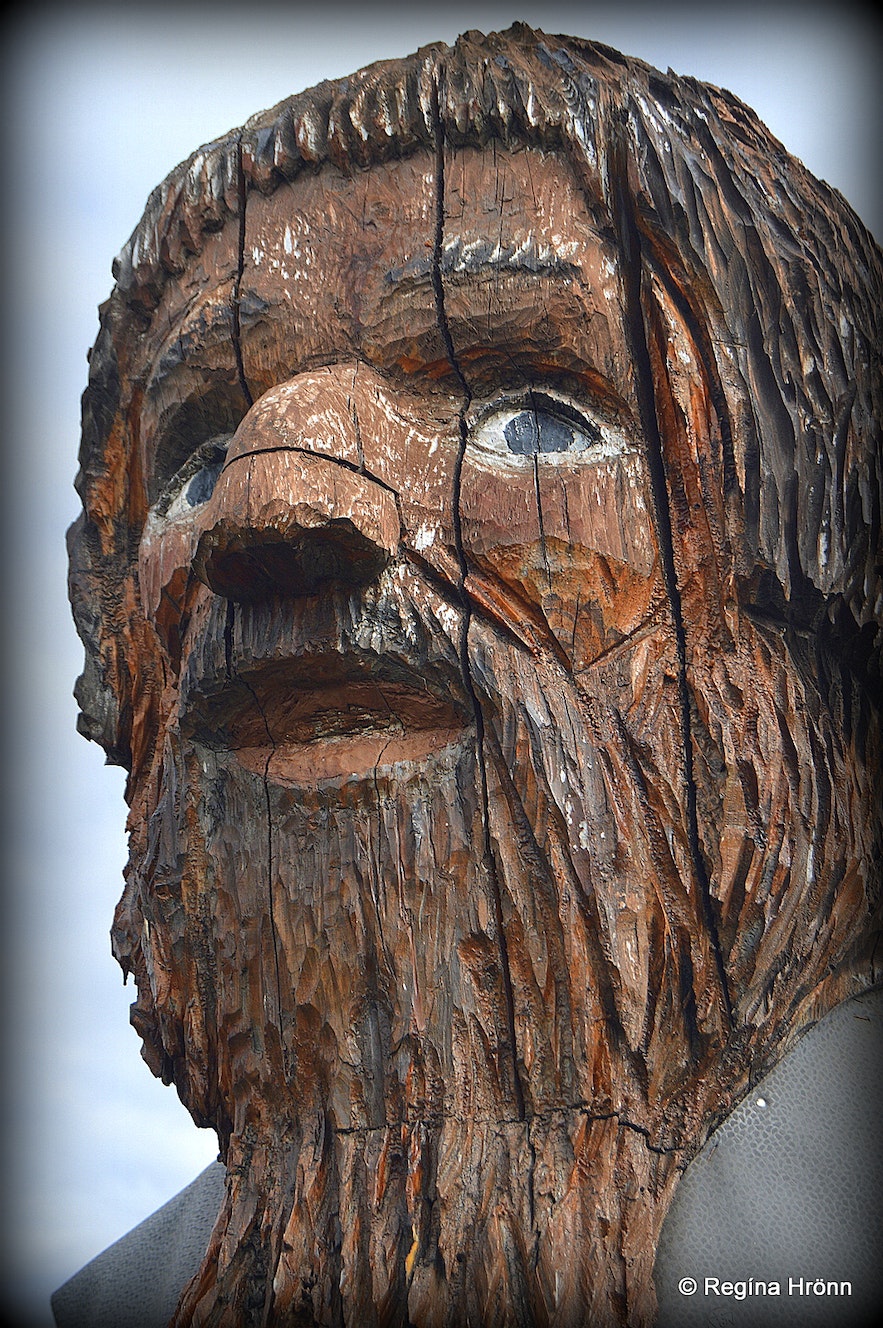 I translated the folklore into English from Þjóðsögur Jóns Árnasonar - the Folklore of Jón Árnason, which I often refer to in my travel-blog. 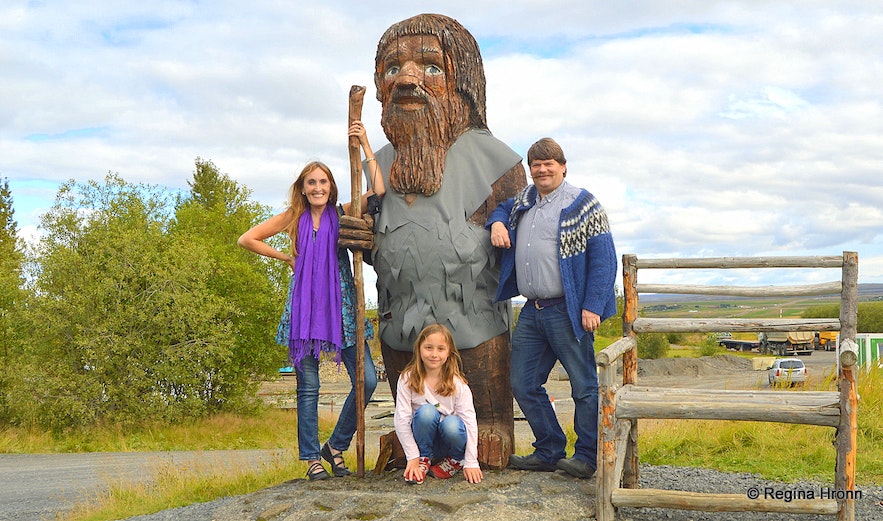 Iceland was heathen when this story happened. At that time the giantess Hít in Hítardalur valley in West Iceland held a big troll party in Hundahellir cave.

In my photo by Konungshver hot spring, you can see Mt. Bláfell in the distance

All the trolls in Iceland were invited including Bergþór.

After dinner, Hít invited the trolls to entertain themselves, and they chose tests of strength and Bergþór was amongst the strongest of men".

I told you the story about the big troll party in my travel-blog: 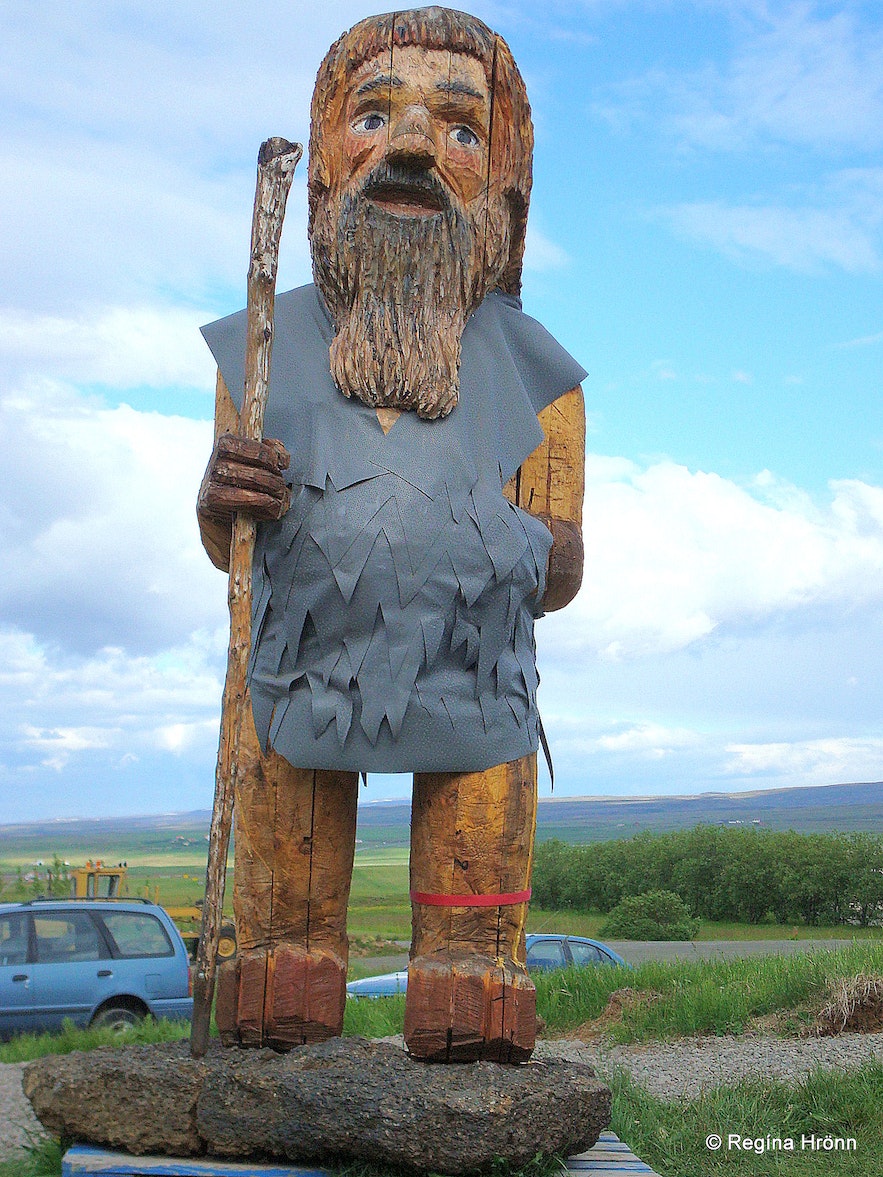 Bergþór was a gentle troll and didn't hurt anybody if he was not provoked and he was thought to be clairvoyant and wise.

When Christianity started spreading in Iceland Hrefna urged her husband to move away from Mt. Bláfell north across the Hvítá river, because she couldn't stand watching the settlement below after the inhabitants became Christians (trolls were not Christian and shunned away from everything having to do with Christianity ). 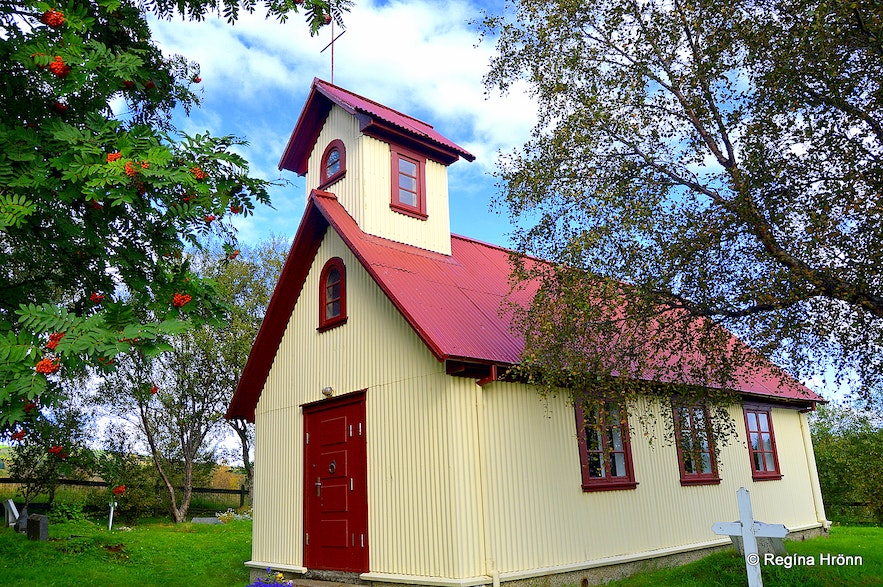 Bergþór didn't think this mattered at all and told Hrefna that he would stay in the cave.

Hrefna decided on moving anyway and moved north of the river and built a lodge beneath a mountain; it has since been called Hrefnubúðir.

From then on the couple only met each other by lake Hvítárvatn and went trout fishing together. 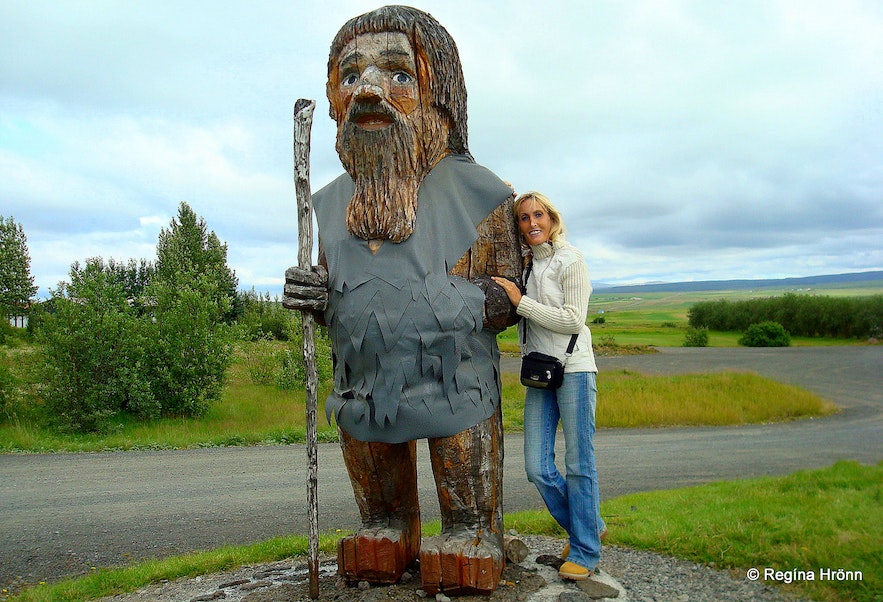 Bergþór frequently went to Eyrarbakki village to buy flour, particularly in the wintertime when there was ice on the lakes. He carried with him two barrels of flour.

When he arrived at Bergstaðir farm in Biskupstungur he met the farmer and asked him to give him something to drink. Bergþór told the farmer that he would wait while the farmer went to fetch the drink.

Bergþór put down the barrels by the rock, which the farm gets its name from - Bergstaðir - Rock farm - and sculpted a hole into the rock with the point of his staff. The farmer returned with the drink and offered it to Bergþór. 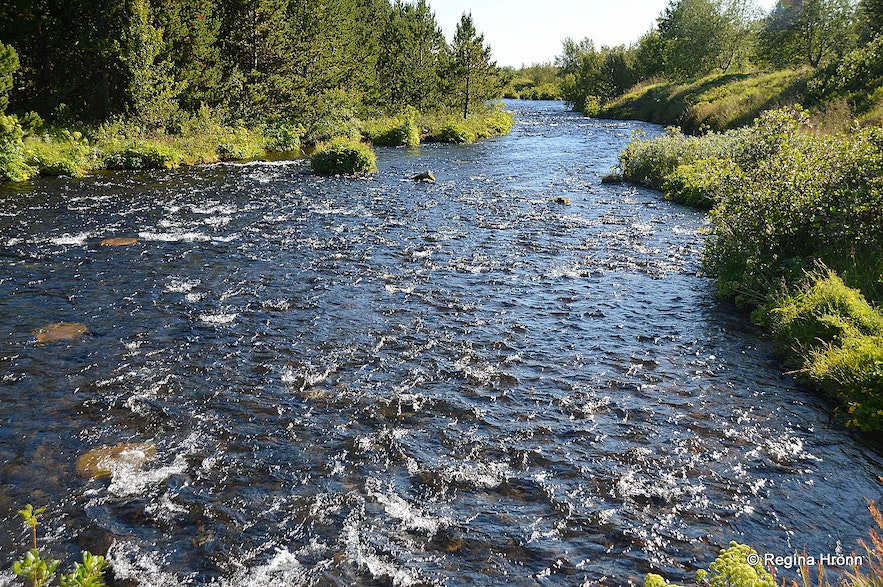 Bergþór then said goodbye to the farmer and went on his way. (See another similar account a little bit further on in my travel-blog and there is also yet another version available which I didn't translate). 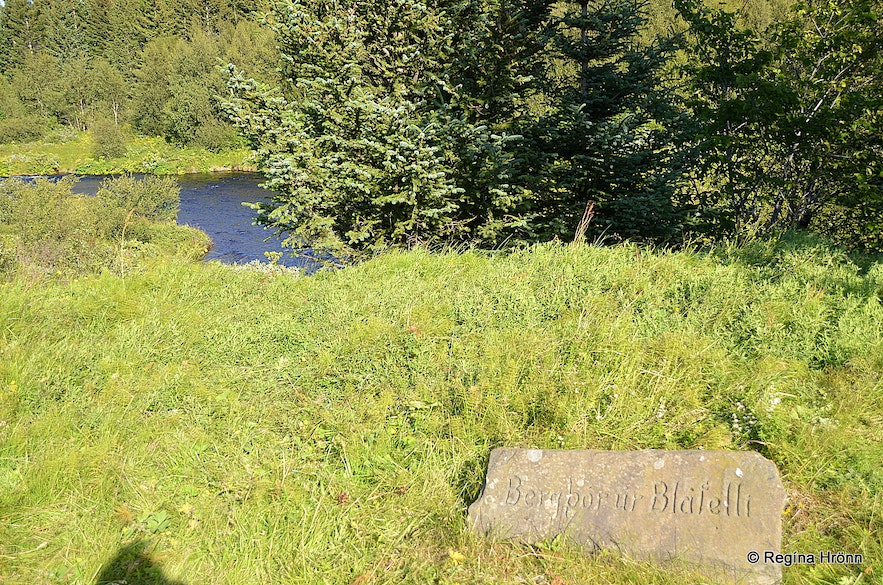 Then the farmer should go and collect his body in his cave in Mt. Bláfell and the payment for his good deed would be found inside his kettle. 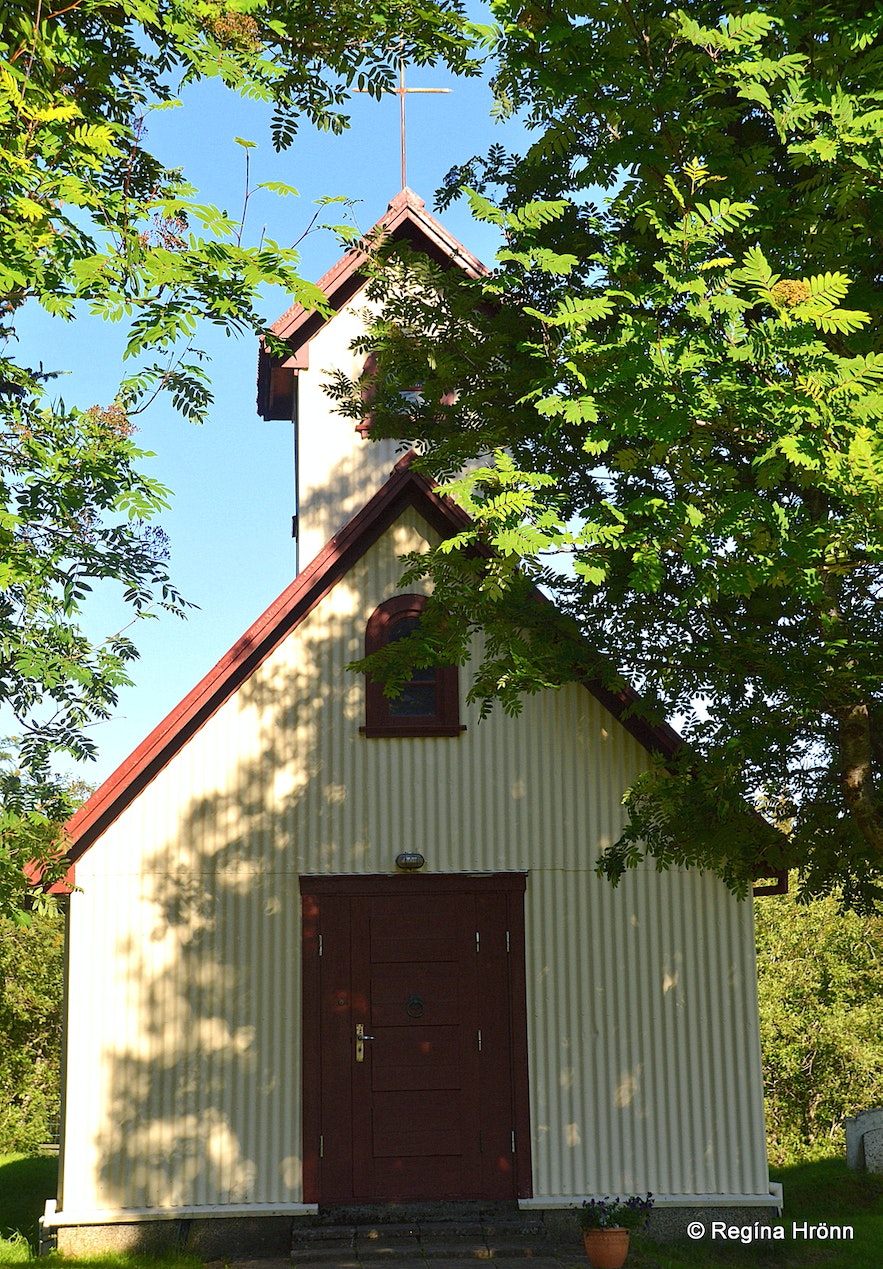 As a sign of his death, his large walking staff would be by the farm door in Haukadalur. The farmer agreed to this and they parted.

One morning as the country people arrived at Haukadalur they found a huge walking staff by the farm door. The farmer was informed about this and recognized the walking staff of Bergþór.

He had a coffin made and went up to Mt. Bláfell in the company of several of his men; they found Bergþór dead in his bed in Bergþórshellir cave. 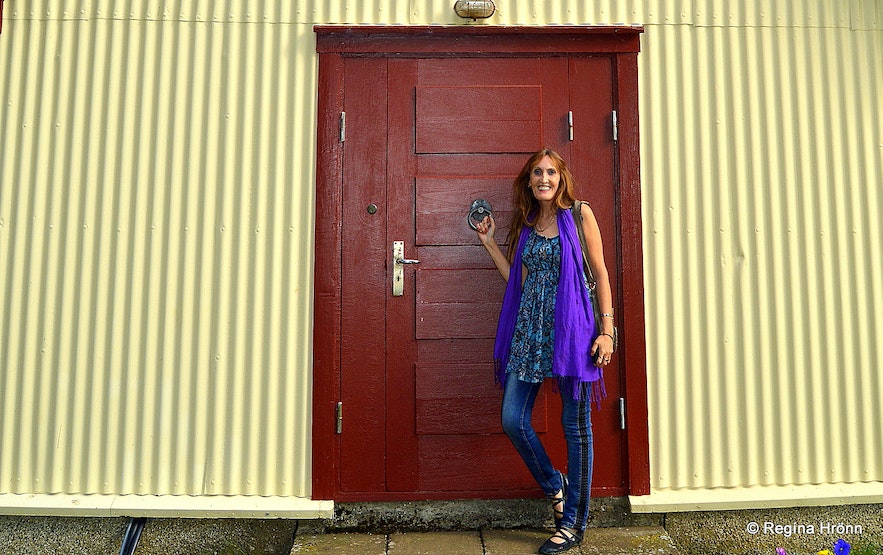 Holding onto the ring - the church was locked

They placed him in his coffin and were surprised that such a huge man (troll) didn't weigh more as he seemed light to them.

The farmer noticed a big kettle by the bed and checked to see if it contained anything, and when he saw nothing but leaves inside it he gathered that Bergþór had tricked him so he left the leaves behind.

But one of the men in his group filled both his mitten with these leaves.

When they had descended from the mountain and carried the coffin to the level ground they rested and the man who had taken the leaves checked his mittens; they were filled with money! 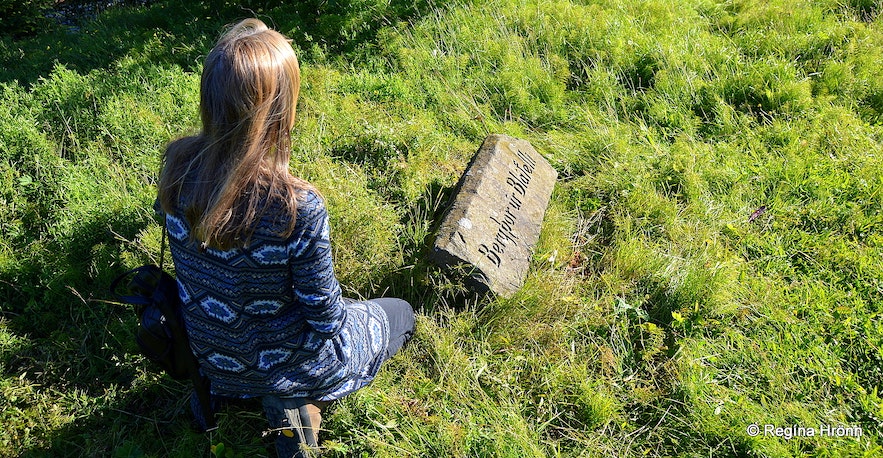 The farmer and his men returned to the cave to pick up the kettle, but they didn't find the cave and it has been hidden ever since. 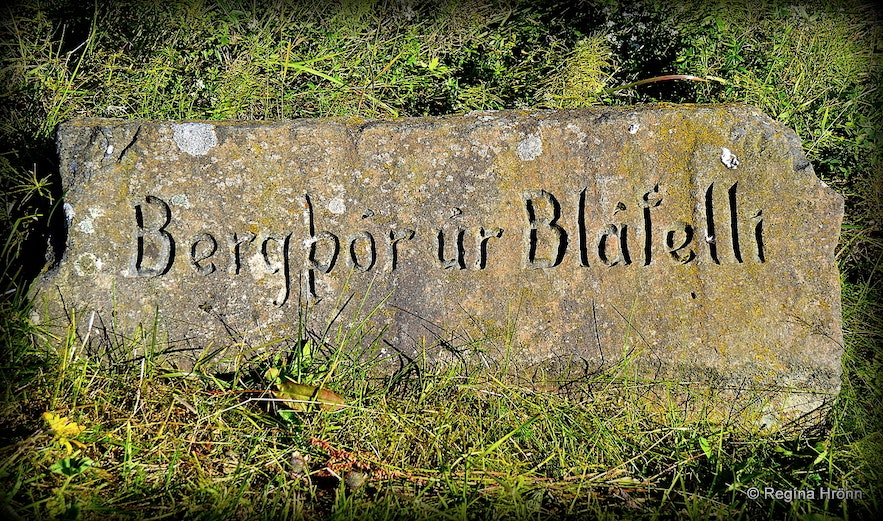 They returned and carried the body of Bergþór down to Haukadalur and the farmer had him buried north of the graveyard; it has since been called Bergþórsleiði or the Grave of Bergþór. 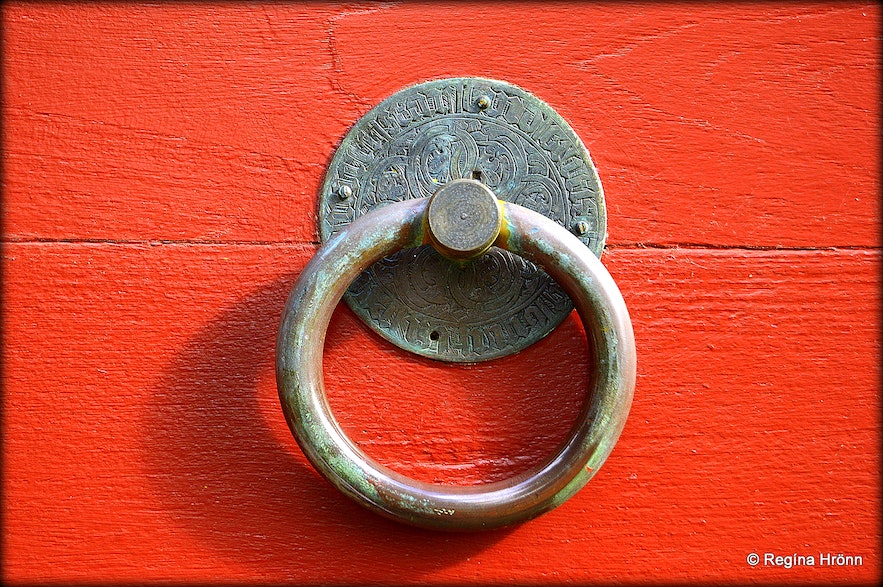 The ring on the church door

The forestry director, Hákon Bjarnason, put a gravestone, at his own expense, on the grave of Bergþór.

He also put the gravestone on the grave of Jón hrak at Skriðuklaustur in East Iceland. Bless him for doing this.

You will find Hákonarlundur grove in Haukadalsskógur forest with a carved pole in memory of Hákon Bjarnason.

I have written about the forest and the grove amongst other things in my travel-blog:

The carvings on the pole refer to the history of forestation in Iceland and show the land wights of Iceland, who protect the north, south, east, and west parts of Iceland. 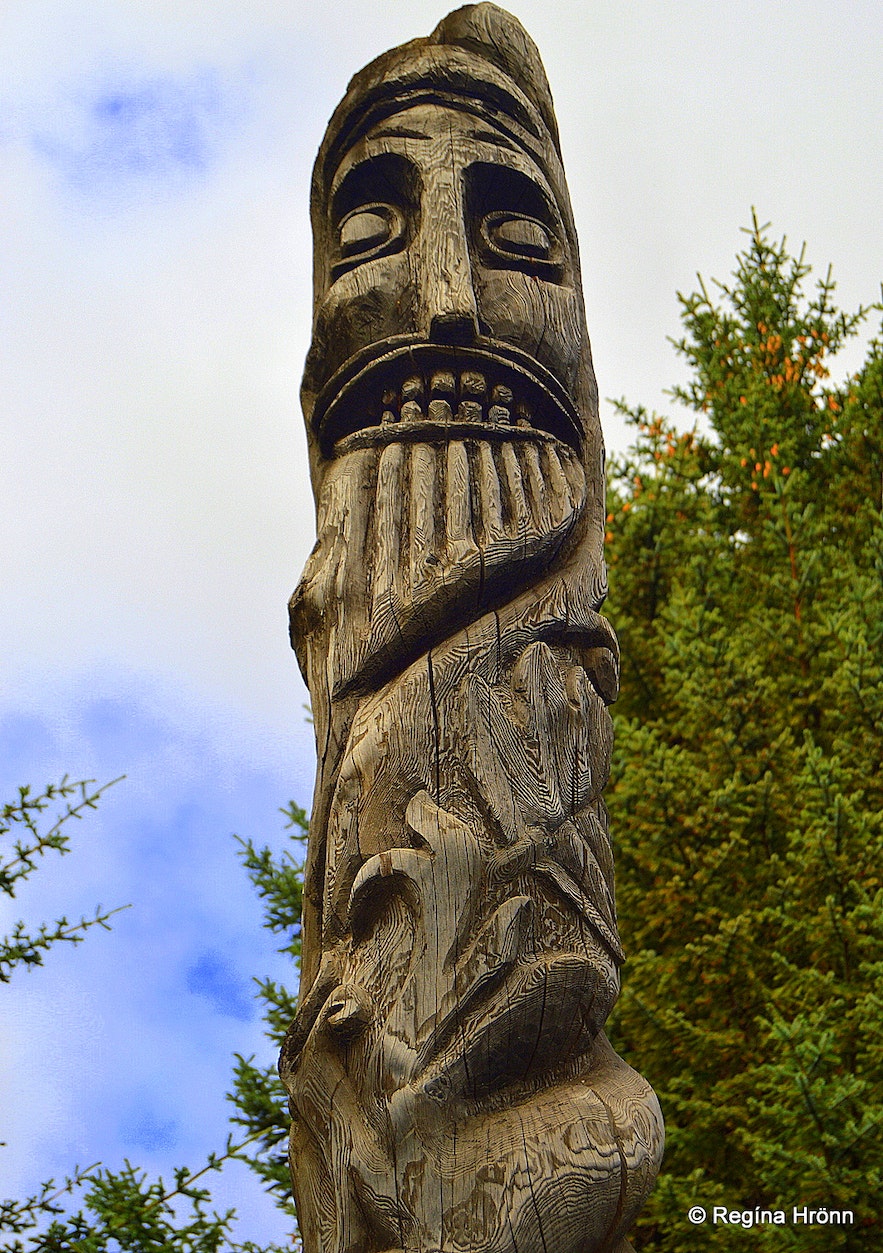 Landvættir Íslands - the land wights of Iceland in Hákonarlundur grove

Another folklore is called Bergþór í Bláfelli. It is short and tells us the story of the stone tub, which Bergþór made at Bergstaðir. I translated it into English:

"Bergstaðir is a farm in Biskupstungur. By the farm is a tub, which has been sculpted in rock. The story goes that the giant Bergþór, who was at Mt. Bláfell, had sculpted this tub. This stone tub was used for keeping sour whey (mysa).

Care had to be taken so that water wouldn't enter the stone tub and mix with the whey as then it would freeze. And it must never be neglected to put whey into the stone tub or else misfortune would happen to the farmer's livestock. This has only happened thrice in the last few years. Every time this happened the farmer at Bergstaðir farm lost some of his livestock". 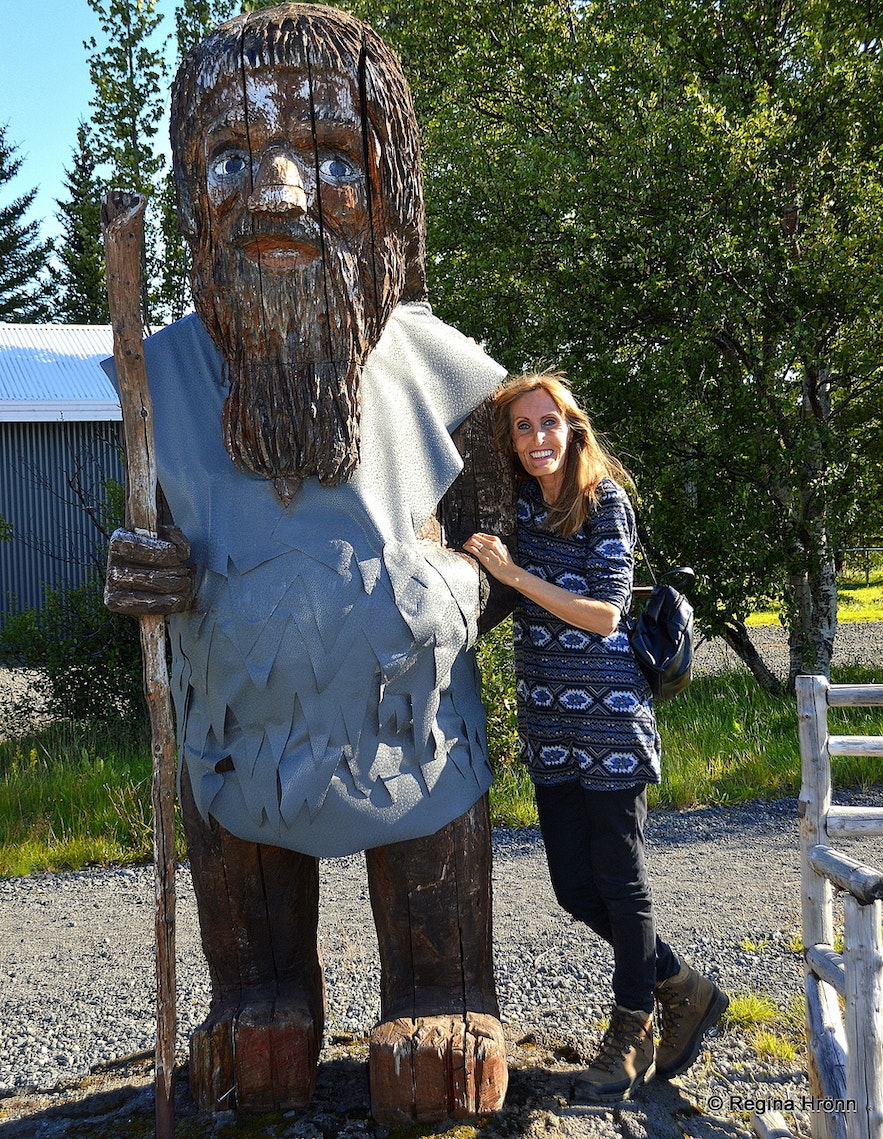 With Bergþór in his new location in the summer of 2020

The owners of Bergstaðir in Biskupstungur (now Bláskógabyggð) still carry on this tradition of filling the stone tub with whey every year in August.

And according to Sveinn Kristjánsson, who lived from 1915-1940 at Bergstaðir and often had the role of filling the stone tub with whey, it happened twice in the 26 years that he lived on this farm that the stone tub wasn't filled with whey.

The first year a cow died (1 out of 3) and a good mare died in the marsh. In the second year that the stone tub didn't get filled with whey, 20 sheep died of lung disease. 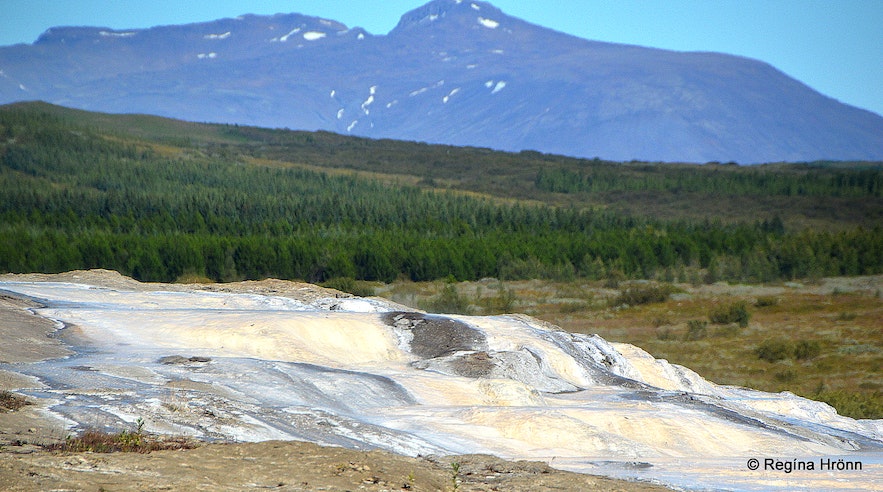 Here you can see how close, when zoomed in, Mt. Bláfell is to the Geysir geothermal area

Later on, in the last year that the farmers at Bergstaðir lived on the farm and only had 2 cows left, both of them died suddenly. 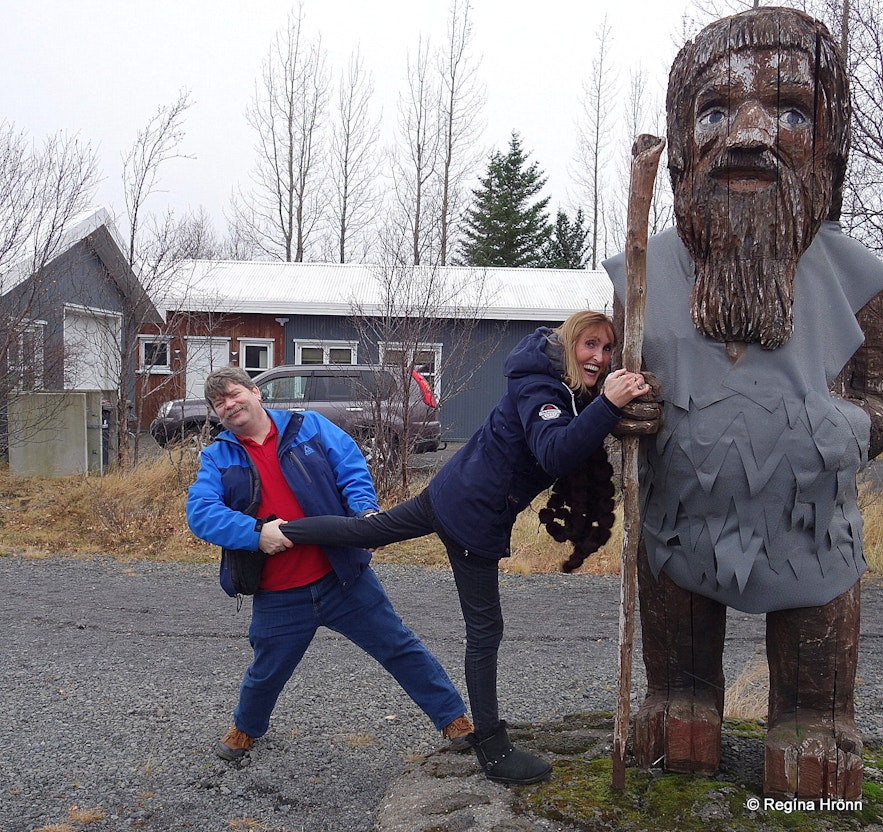 With Bergþór in the winter of 2022

The story goes that some of the locals in this area, Tungnamenn, can still see Bergþór roaming around this area, drinking whey from the stone tub, and always make sure that there is enough whey for him to drink.

I must pop up to Bergstaðir (Bergsstaðir) next summer to see if I can find the stone tub and take a photo of it.

I love such folklore and hope you enjoy reading about them as well. I think they add to the experience of visiting these places. 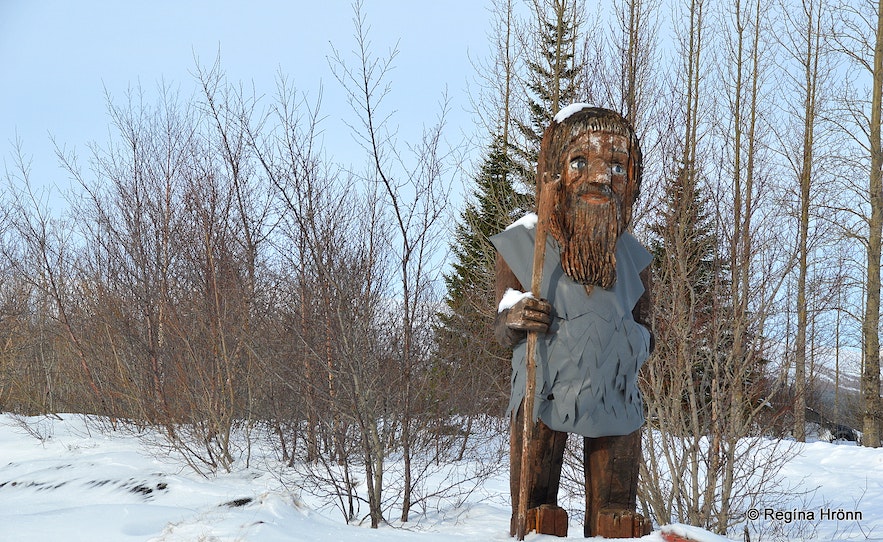 Bergþór roaming around with his walking staff

In the folklore on the other hand, Bergþór is said to be the son of Þórólfur and Hlaðgerður, not their grandson.

In Ármannssaga hin yngri (chapter 10) Bergþór is mentioned in connection with the big troll games at Hofmannaflöt plains, which I am going to tell you about in another travel-blog. Bergþór was only 10 years old at the time and was defeated by Ormur sterki - Ormur the Strong in these troll games. 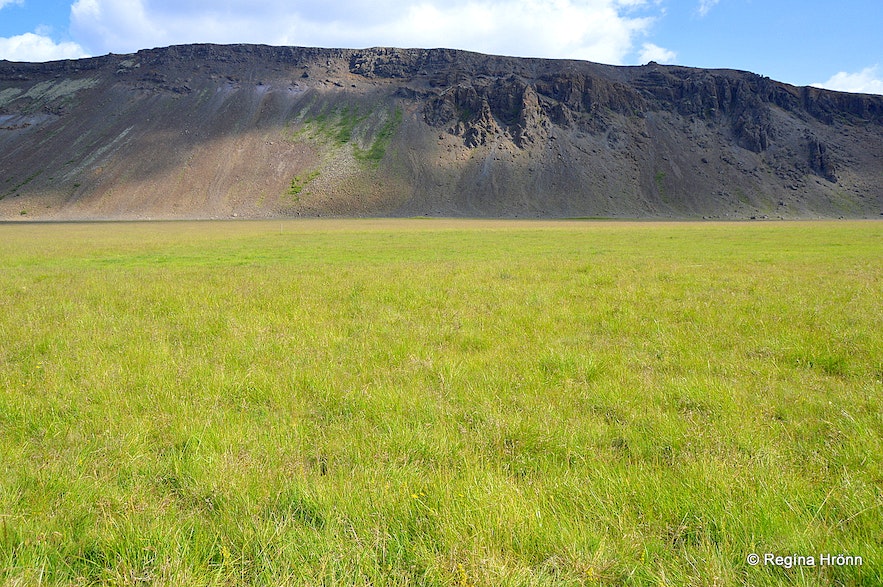 The wooden statue of Bergþór was made in 2006 by Bjarni Þór Kristjánsson and Jón Adolf Steinólfsson. The original idea came from Guðmundur Magnússon, who wanted to make a statue with a reference to Icelandic history.

Bergþór is made from wood from Haukadalur valley and weighs around half a tonne. Why the statue was moved I don't know, but it happened when the new hotel was erected. 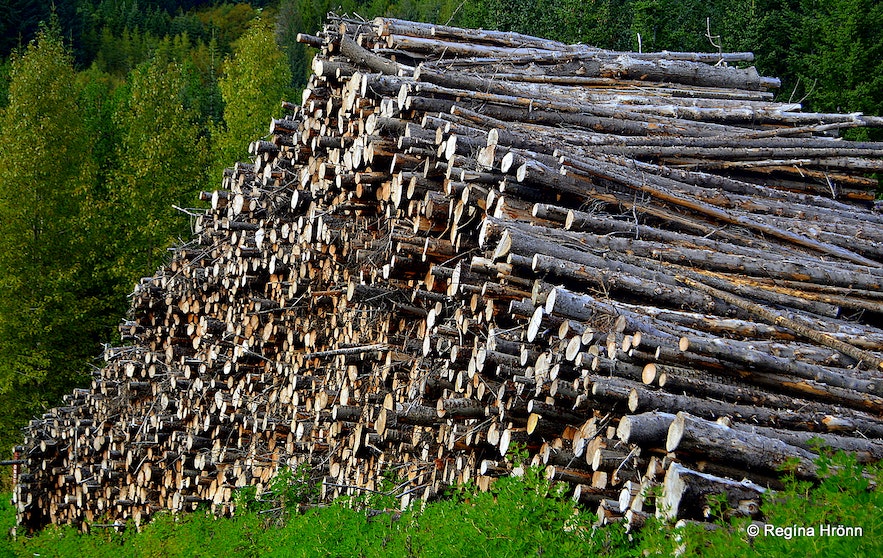 There is so much to see and do in this area, which you can read about in another travel-blog about the Geysir geothermal area which is one of the most popular attractions in Iceland: The spectacular Geysir Geothermal Area - Strokkur and all the other Hot Springs.

And in the vicinity is The Majestic Gullfoss - Iceland's Golden Waterfall, which gives a Name to the Golden Circle. 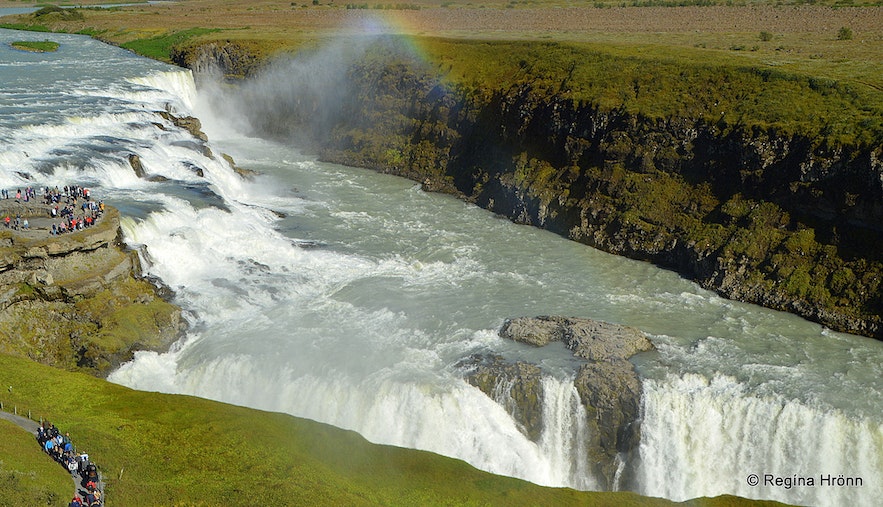 I have also written several other travel-blogs about trolls if you are interested in Icelandic folklore, f.ex.: 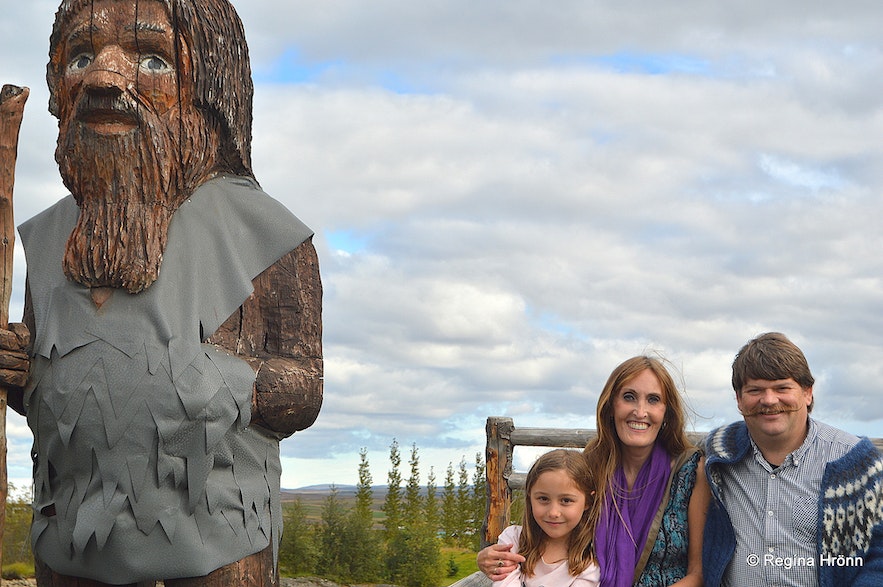 Have a lovely time in Iceland and I hope that you spot the wooden statue of Bergþór when you visit the Geysir geothermal area :)