On the westernmost point of the magical Snæfellsnes peninsula in West-Iceland, you will find Skarðsvík, Öndverðarnes, Svörtuloft and Saxhólsbjarg. There are many places of interest in this area as you can see from the sign above.

Top photo: the road sign for Skarðsvík, Öndverðarnes, Svörtuloft and Saxhólsbjarg which we are going to explore 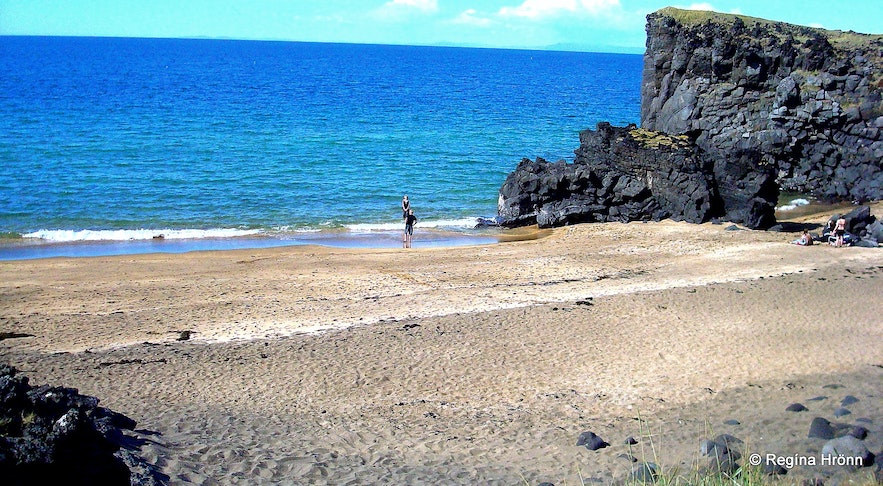 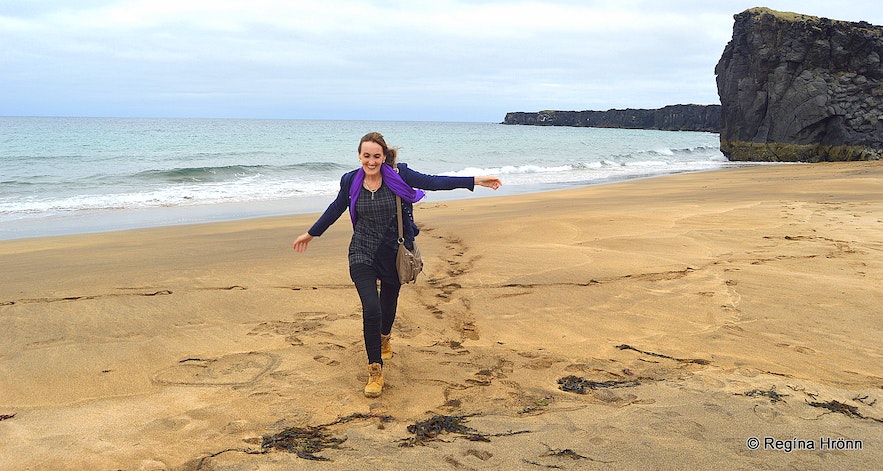 Only in the west have I seen golden beaches in Iceland. Skarðsvík is thus very popular amongst Icelanders and on sunny days you can see people sunbathing, swimming in the sea and jumping off the cliffs.

There is a good picnic area here and a lot of lava clefts; reminding me in places of a miniature Þingvellir National park where the tectonic plates can be seen above ground.

A pagan Viking grave from the 10th century was discovered here in 1962. The well-preserved skeleton of a young man aged 18-25, and his belongings, are now preserved at the National Museum of Iceland. 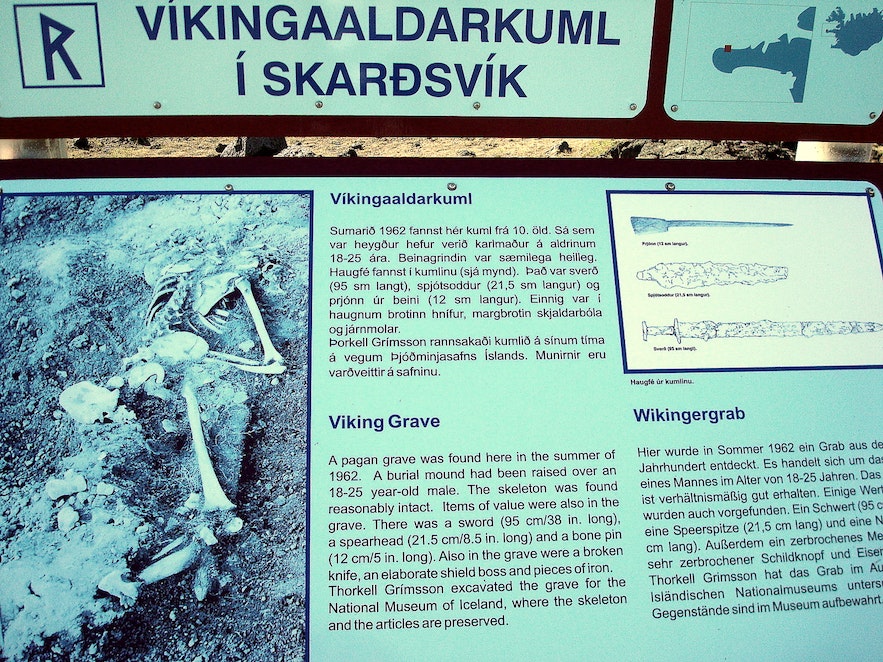 A pagan grave at Skarðsvík

Some of his earthly possessions were put in the grave with him like was customary at this time, we call it "haugfé" - men were buried with their weapons and women with their jewellery.

The old things found in the grave of this young Viking were: a 95 cm long sword, a broken knife, pieces of iron, an elaborate boss from his shield, a spearhead and a pin made of bone. See also my travel-blog about Viking ruins and pagan burial mounds in Iceland:

The road to Skarðsvík is paved, but further on it is a bumpy gravel road. Here you can see the exact location of Skarðsvík on the map. 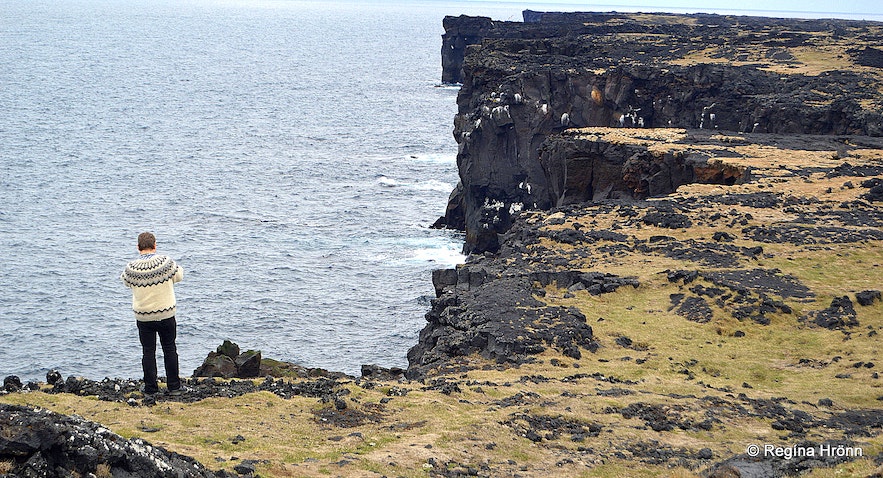 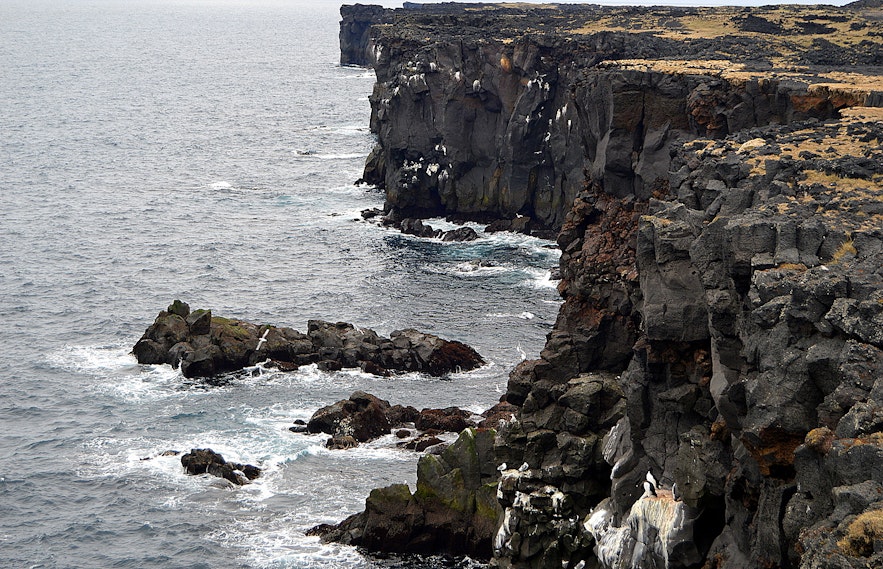 Having driven down road 579 and visited Skarðsvík cove we now take the road to the left and drive to Skálasnagi and Saxhólsbjarg cliff where you will see a lighthouse and the infamous Svörtuloft or the Black Ceiling. This is a ruggedly beautiful place to visit.

The name Svörtuloft sounds ominous and has always been so scary to me, but the name stems from the cliffs being formed of pitch-black lava, like in so many other places in this area. Here the lava flow didn't stop until it reached the cold sea and the surf has eroded the pitch black lava through the centuries. 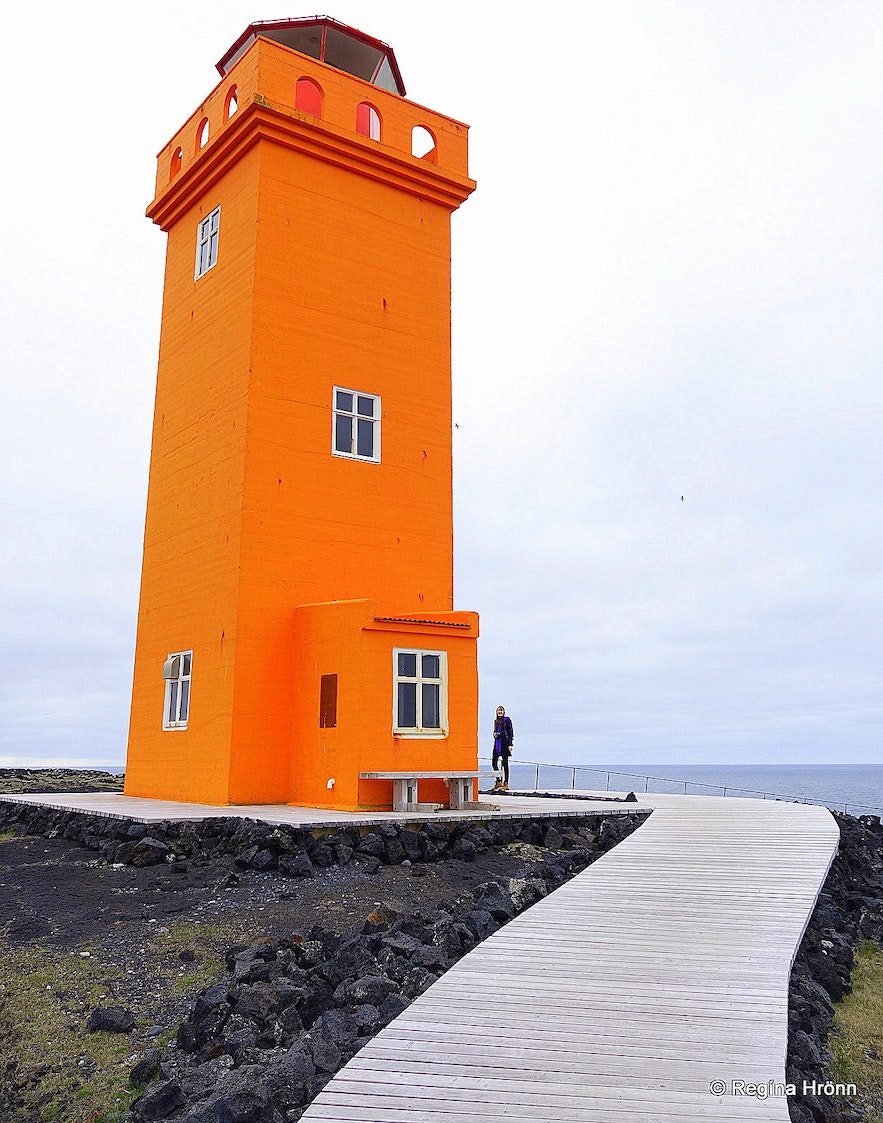 If you are out at sea Skálasnagaviti is called Svörtuloftaviti lighthouse. Bear that in mind that it has got two names; one from land and one from the sea.

The concrete lighthouse, which was taken into use in 1931, is 12,8 meters high is the successor of the first iron bar lighthouse, erected in 1914, which had eroded.​

There are at least 14 places in Iceland by this name, Svörtuloft. The lava here looks like it has been cut and made into a massive, sheer black wall, almost 4 km long. If you visit this area from May until the end of August you will see many seabirds in the cliffs and even some puffins. 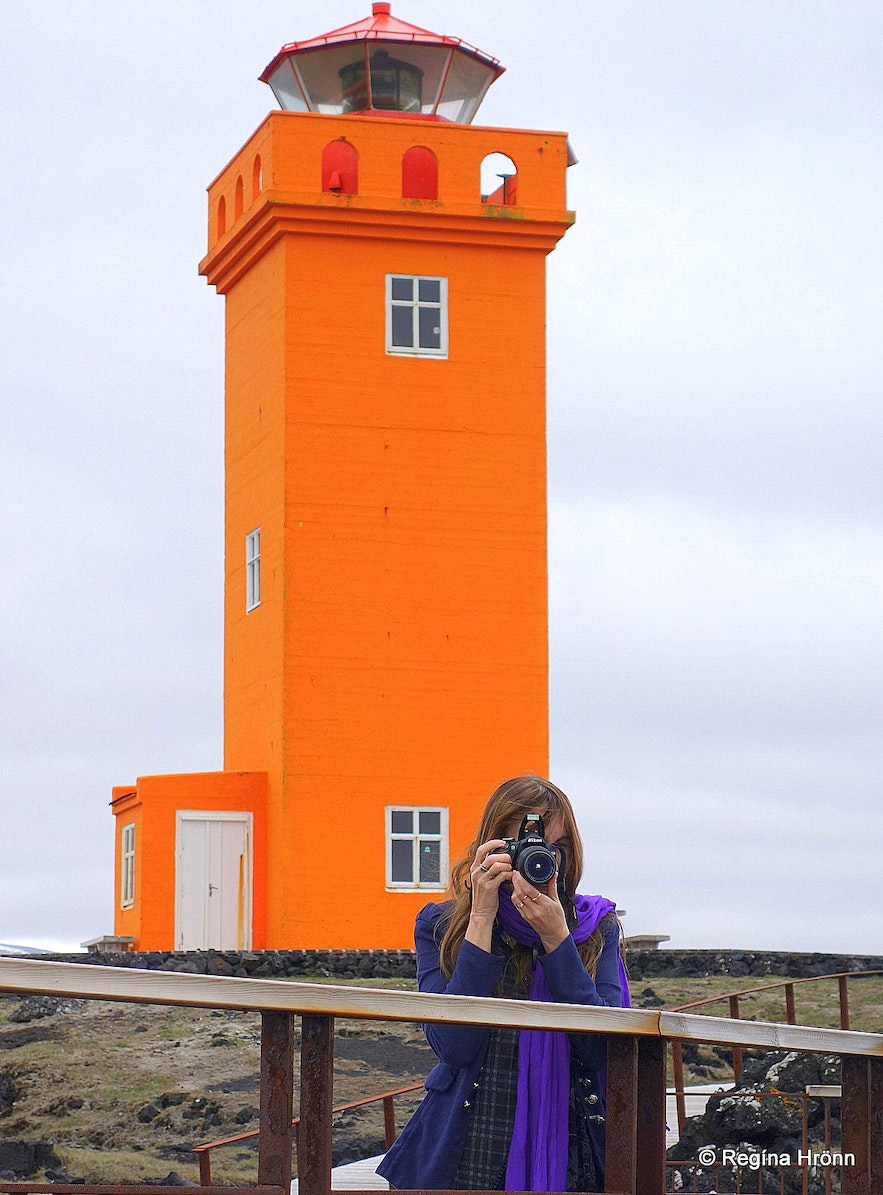 Just be very careful not to lose your balance while having a look at them and taking photos!

A viewing platform has been put up by Skálasnagaviti lighthouse, but not at Hvalrauf just before you reach the lighthouse. At Hvalrauf you can see an old landmark between the land of Saxhóll and Öndverðarnes.

I do not think many people stop here anyway, but I stepped out of the car and had a look at the birds below. One really needs to lie down on one's stomach as not to lose balance here. You can see Hvalrauf in my photo below. 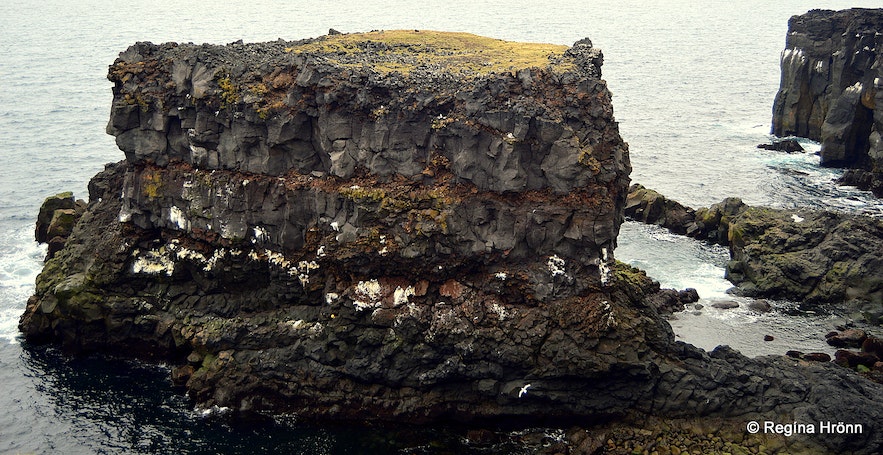 From the Settlement of Iceland and until the 20th century these breeding birds were a food source for the inhabitants of Snæfellsnes peninsula. They would collect the birds' eggs in June and the grown birds in August.

Collecting eggs in these craggy black cliffs is dangerous and they would rely on ropes to lower themselves down these cliffs. 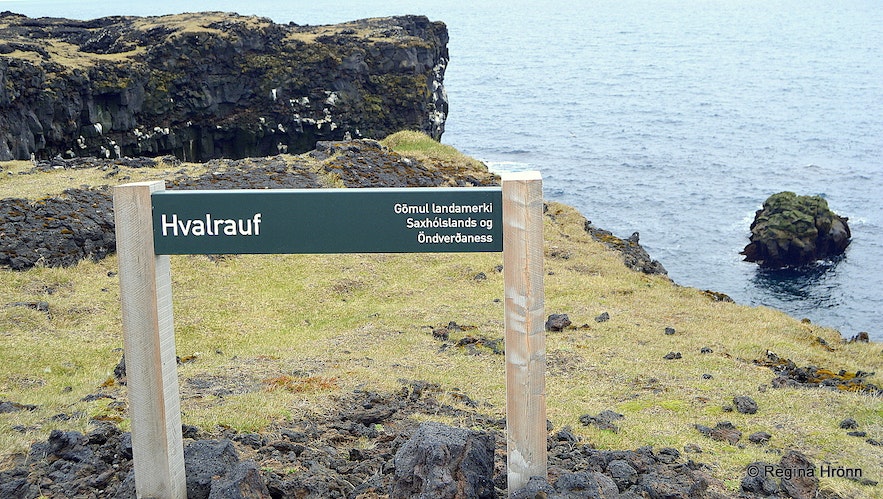 Ships don't stand a chance against this black lava wall in bad weather and when I was standing on this spot looking out to sea I felt fear creeping over me when thinking about ships crashing against the infamous Svörtuloft. There are so many dangerous places in Iceland, which we who live here, are brought up to respect and fear.

Here, by Svörtuloft the mailboat Anne Dorothea stranded and the whole crew perished - and only one hand was found. And only as recently as back in 2001 the fishing boat, Svanborg from the neighbouring village, Ólafsvík, stranded by Svörtuloft, with 3 fishermen losing their lives and 1 saved.

Many more ships have been wrecked here and too many people have lost their lives. 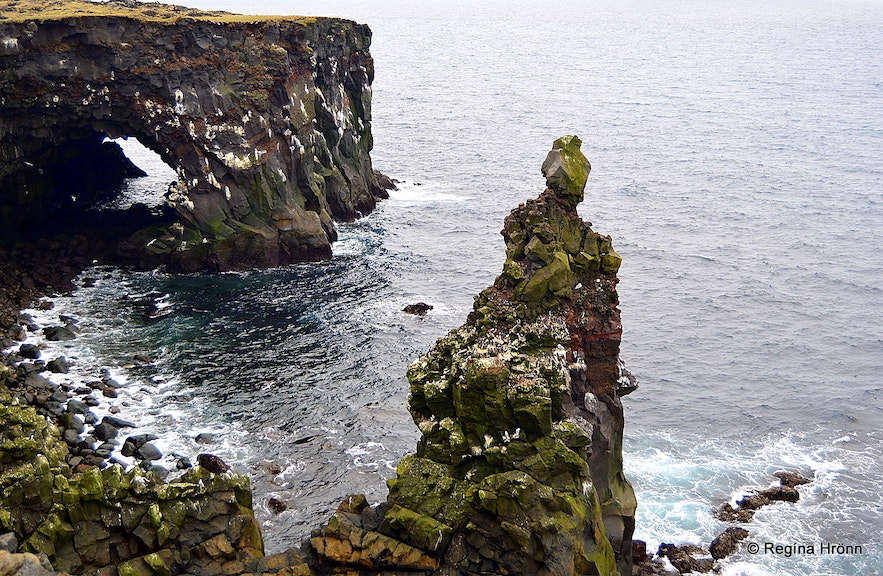 The name, Skálasnagi, stems from a cliff that was connected by a stone bridge to land. The stone bridge collapsed in 1973 and now this cliff stands alone and majestic looking - it even looks like it has got a head.

I hope the surf will not manage to destroy this beautiful headed cliff, but that is to be expected as the surf is so strong in this spot. 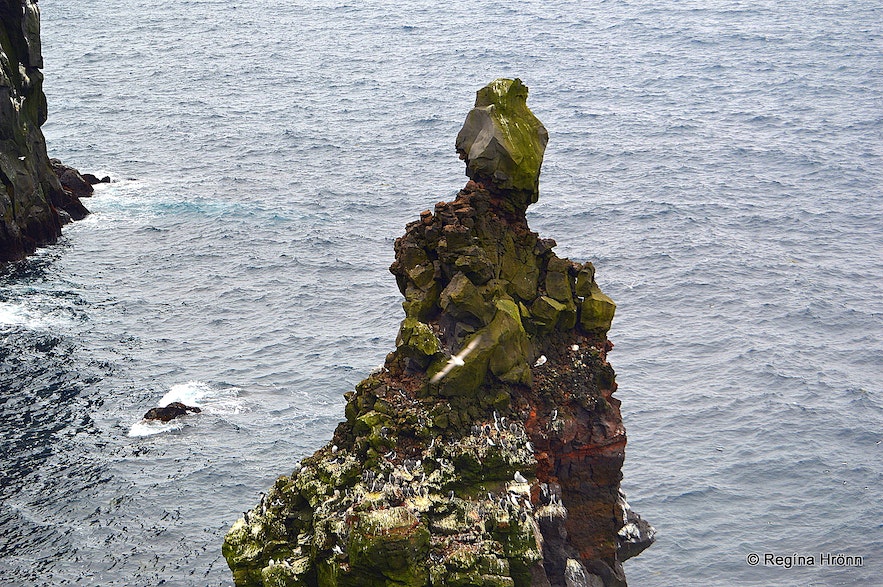 Don't visit this place in really bad weather, it is better to be safe than sorry in these dangerous places.

Here you can see the location of Skálasnagaviti lighthouse a.k.a. Svörtuloft lighthouse on the map. Close by is Öndverðarnes, the westernmost tip of the Snæfellsnes peninsula, about which I have written another travel-blog.