In Njarðvík in the Eastfjords of Iceland, close to Borgarfjörður-Eystri, you will find an amazing gorge called Innra-Hvannagil gorge. This beautiful gorge is a golden rhyolite art of nature - tall screes filled with the most beautiful rhyolite rocks. 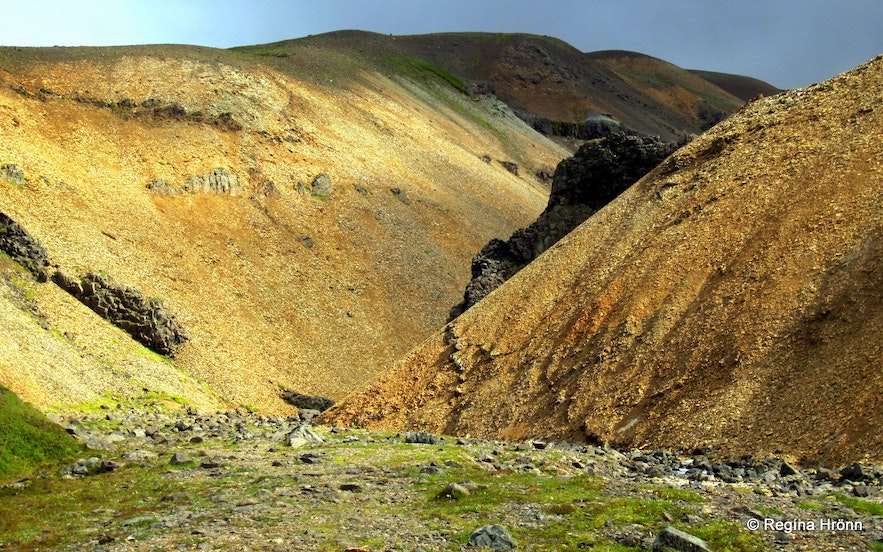 I was lucky that the sun came out and lit up the gorge, making it even more magical. I felt like I had stepped into a fairytale world! This is what I love about my country and why I never tire of travelling around Iceland; nature changes so rapidly and there are always new, exciting places to visit!

Thus Iceland never ceases to amaze me and I know that in this area in East-Iceland there are plenty of places I haven't visited yet.

There is one hike in particular to Stórurð which I have wanted to join for years and hopefully, I will be able to join it soon, so I can show you that place. I have seen photos of it and the water has the most amazing blue colour. 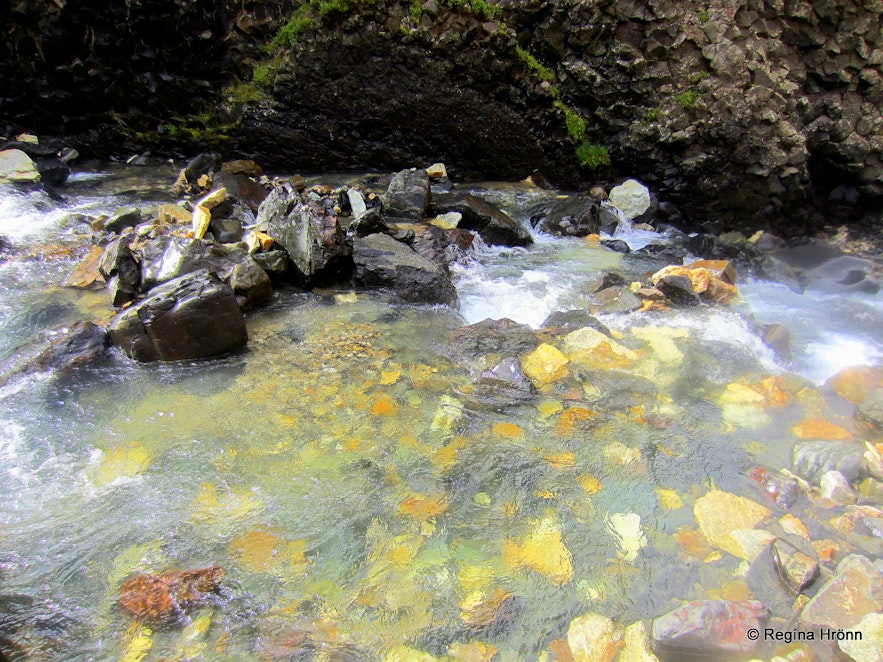 The creek in Innra-Hvannagil gorge

Now, back to Innra-Hvannagil gorge. It cannot really be seen until you walk into it, as it is kind of closed by a big basalt rock.

A creek runs through the Innra-Hvannagil gorge and forms a waterfall a bit further up the gorge. The rhyolite looked like gold in the middle of the creek; all lit up by the sun! It was such a beautiful sight. 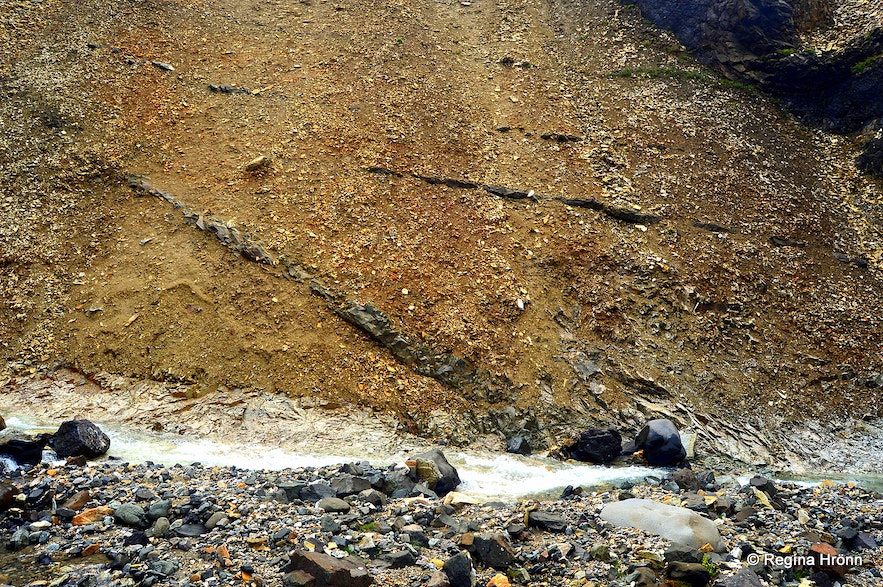 I found folklore in Þjóðsögur Jóns Árnasonar - the Collection of Folklore of Jón Árnason, which is related to Innra-Hvannagil gorge. The account is divided into five sightings and I have translated four of these sightings into English:

"The story goes that in the olden days, many strange things happened during the lifetime of each farmer; such was the belief in Njarðvík right until the 18th century. Once in the wintertime, a man hiked over the mountain road named Eggjar. 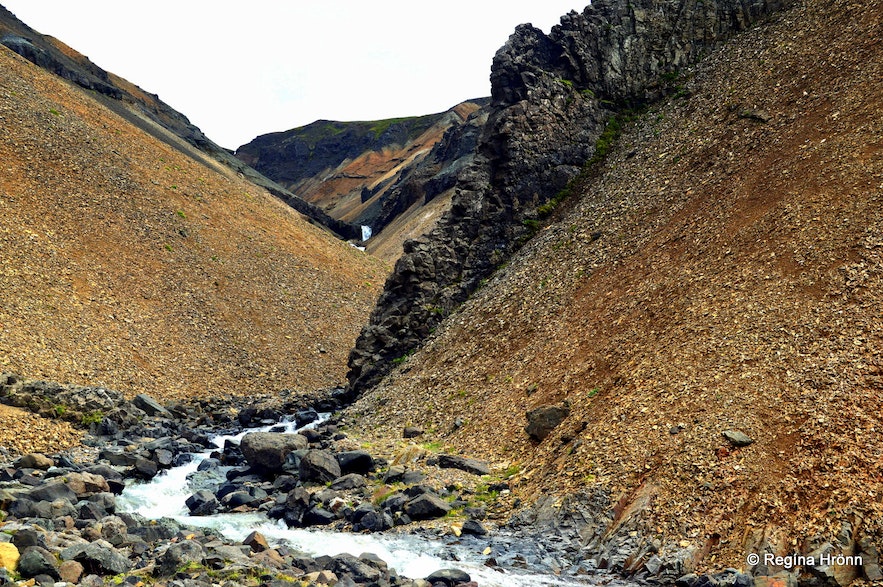 As was the tradition in the olden days on Þorláksmessukvöld - the Eve of the Mass of Þorlákur - Christmas ewes were being slaughtered by the farmhouse door in Njarðvík and the butchers were in high spirit.

As their merriment reached its culmination they heard a loud step outside the door and the thump of an alpenstock being stuck into the ground. They found this to be strange and looked out the door.

There was a huge man standing by the door leaning on a rod, which looked like it was made of iron; the man was hunched and looked in the direction of the door like he was eavesdropping. The men panicked and fell silent. After a short while, they heard "it" stomping away again.

Once upon a time, the people of Njarðvík were burning coal in the fog in the cove. Twice during that day, they heard a belly laugh in a valley called Urðardalur; it is by Mt. Dyrfjöll. Their dogs jumped up and started barking loudly.

Innra-Hvannagil gorge as seen from afar

One night after having played together the children of the farm returned home and ran towards the farmhouse door and wanted to enter the farm. But in the moonlight, they noticed that a man was lying on the ground across the farmhouse door. 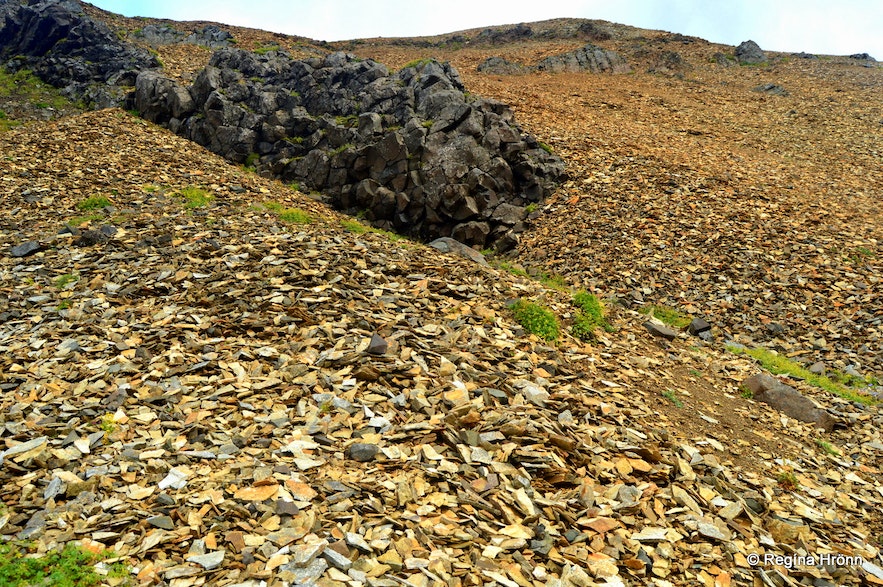 Rhyolite in abundance in Innra-Hvannagil gorge

There was yet another account in this story, which I skipped, of huge footsteps, which were found at Hnausar in this area.

Nobody knows who or what this man was, but this folklore has been listed in the category under trolls, even though the title says that it is a ghost story. So this man was either a troll or a ghost...

Whichever he was he for sure frightened the people living in this part of East-Iceland! 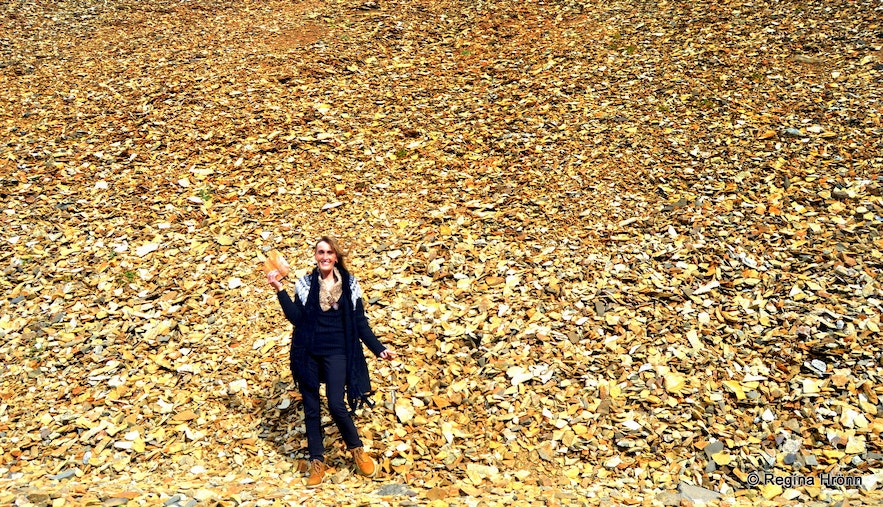 Surrounded by rhyolite in Innra-Hvannagil gorge

There are so many beautiful rhyolite and basalt rocks in the gorge that I felt totally elated after my visit, as I am a huge fan of beautiful rocks. 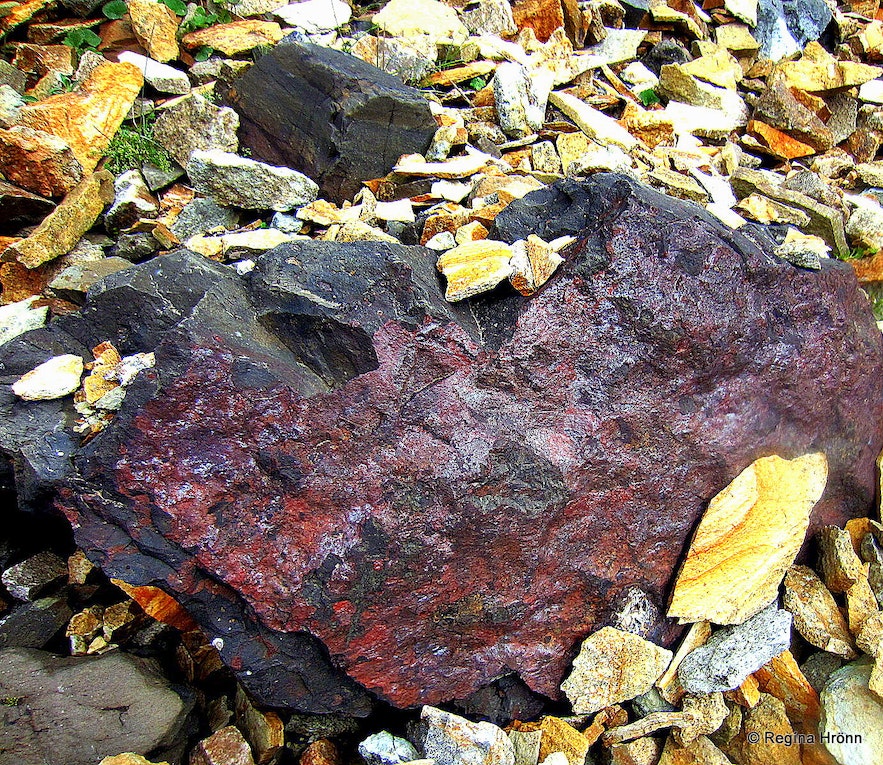 Don't miss visiting this beautiful gorge when you are travelling in East-Iceland. Innra-Hvannagil gorge is located by road 94 in Njarðvík north of Bakkagerði village and Borgarfjörður-Eystri in East-Iceland.

To reach this area you can rent a car in Reykjavík and drive to the Eastfjords in a couple of days.

I have written 3 travel-blogs about what you will see when you drive further and visit Bakkagerði village, where you will see a myriad of puffins from April until mid-August, and the Elf City where the Elf Queen of East-Iceland resides.