Iceland has got some spectacular canyons, one of which is Fjaðrárgljúfur canyon in South-Iceland. Fjaðrárgljúfur is a canyon with quite a unique serpent-like shape and it was not well-known to visitors to Iceland until a few years ago. Don't worry if you cannot pronounce it, it is even difficult for Icelanders to pronounce ;) 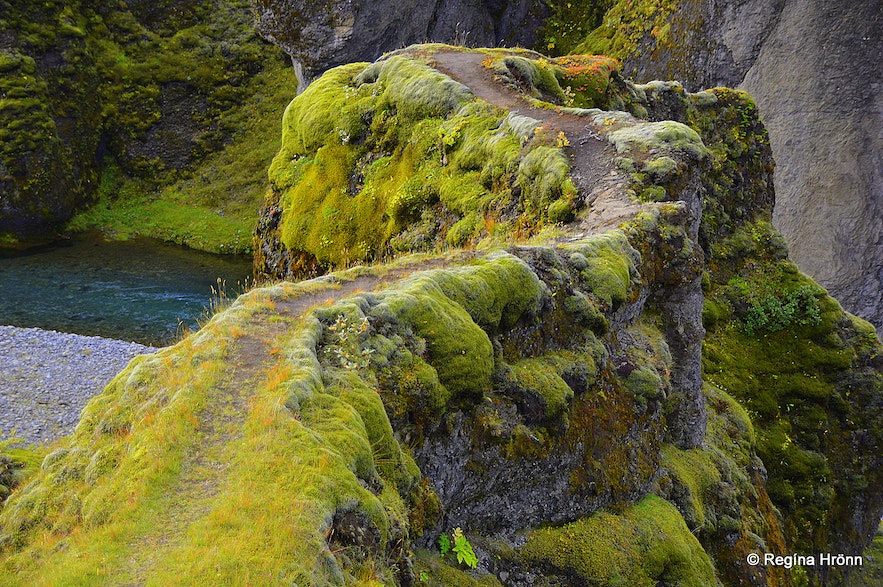 Photo from my 2020 visit. The serpent-shaped ledge in Justin Bieber's video - it is closed for nature protection

There are speculations that Justin Bieber was influential in introducing Fjaðrárgljúfur to other travellers, as he shot parts of his video "I'll show you" in the canyon, and in other beautiful locations in South-Iceland during his Iceland visit back in 2015, f.ex. at Seljalandsfoss and Skógafoss waterfalls, the Wreck of the Abandoned Plane on Sólheimasandur and at Jökulsárlón glacial lagoon.

You can see Justin Bieber going out on a limb in Fjaðrárgljúfur in the video below and even floating in his boxer briefs in the cold river. I have seen that Fjaðrá river has been called a glacial river in some articles about Justin Bieber's swim in it, but it is not a glacial river.

There is no swimming in the glacial rivers of Iceland, as they are too cold and too forceful. You can see the difference in my travel-blog between the small river in Fjarðárgljúfur canyon and the glacial river Jökulsá á Fjöllum:

Fjaðrá is a small and cold river though. It would have been much more comfortable to take a dip in a hot river like the hot river in Reykjadalur:

But on this trip, Justin Bieber also took a dip in Jökulsárlón glacial lagoon, which for sure is ice-cold and should not be repeated, as there are icebergs floating around in the lagoon. 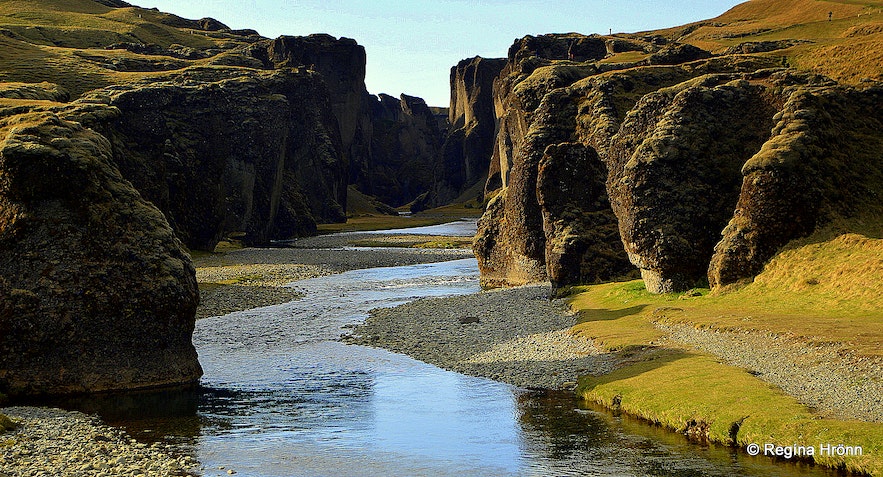 Now, only a few years after the release of the music video tourists are flocking to Fjaðrárgljúfur canyon. The increase in visitors to the canyon is a whopping 80% between 2016-2017!

And in 2018 around 300,000 people visited the canyon! That is almost the whole population of Iceland.

The canyon cannot withstand this much traffic, especially in late winter, beginning of spring, so in March 2019 it was closed for traffic and remained closed until June 1st, 2019, so nature could recover. This is due to thawing conditions. The fragile vegetation cannot withstand all this traffic and needs time to heal. 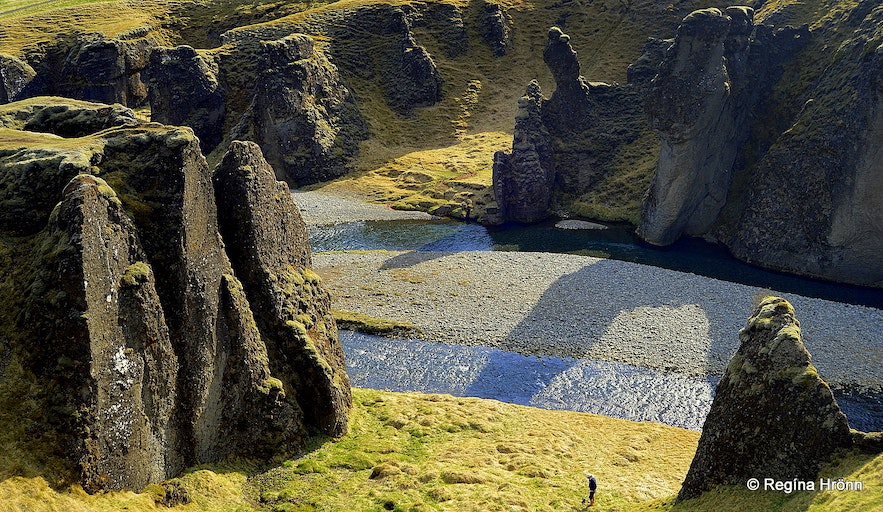 This is the second year in a row that Fjaðrárgljúfur has been closed from March until June and it made a big difference last year. Unfortunately, last year the ranger repeatedly had to herd people away, who had disrespected the closure. The same is happening now and the ranger has to turn around some 200 cars every day.

The sign says that entering this area is strictly forbidden and is punishable by law. It is of utmost importance that we respect this closure so that nature will get enough time to heal. To check out whether the canyon is open or closed to visitors check out the website of Safetravel.is.

I have visited Fjarðárgljúfur in late May, in late July, and in September and you can see the difference in the colours of nature in my set of photos. In May the light was pretty bad for taking photos and in July it rained buckets with a very short period of some sunshine, as you can see in my first photo.

I have gone out on a limb in Fjaðrárgljúfur canyon, not the really narrow ones though, which are now fenced off, but a wider one, where there is a sign telling you that you enter at your own risk. I would not do this now that I have seen how downtrodden the area has become. This path has now been fenced off.

I used to have such fear of heights and would never go close to the edge, but got cured with hypnosis. So my husband told me to go out on the limb in my photo above and below, and he would stay behind and take my photos.

There was a man already taking photos on the limb so I waited for him to finish and then approached him. He called me by name and welcomed me with open arms and told me that he had read my travel-blogs :)

It warmed my heart; I am always so happy when people greet me and tell me that they have read some of my travel-blogs. 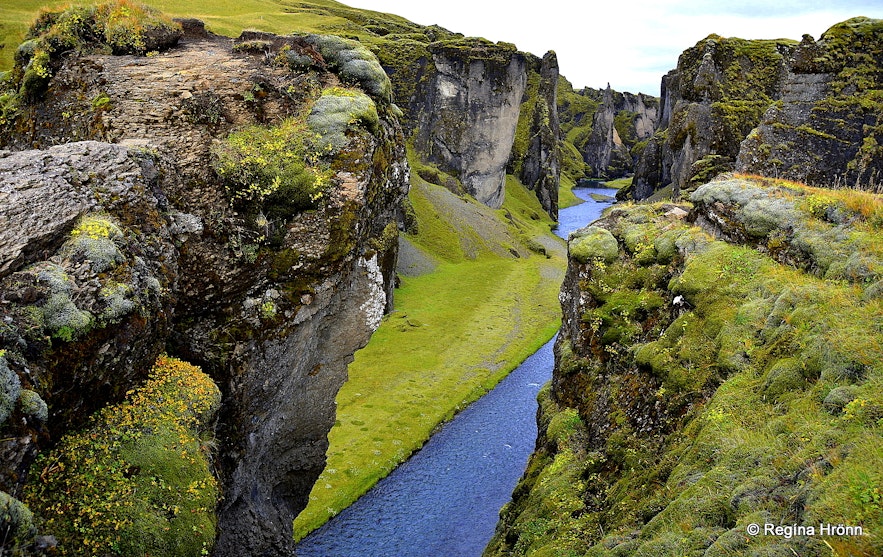 The first time I saw Fjaðrárgljúfur canyon was in an Icelandic travel program on RÚV, our state TV, and I have visited it a couple of times since then, both before and after the "Bieber effect".

By the time I visited in 2016 ropes had been put up in several places to prevent people from going out on a limb, and to protect nature.

When I visited in the Autumn of 2020 most of the ledges had been fenced off and an observation platform by the waterfall had been put up. This is much safer for visitors and gives nature the chance to heal. 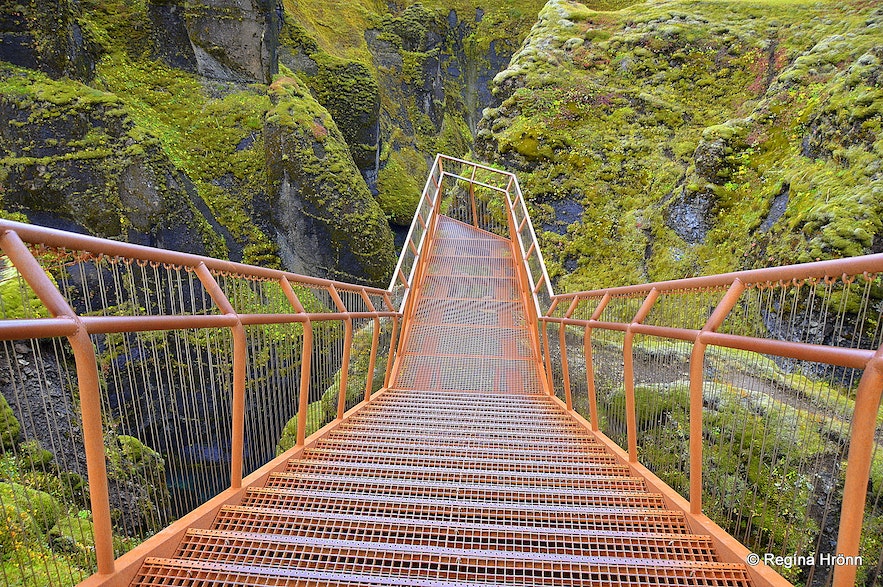 Mögá river creates the waterfall in my photos and video. 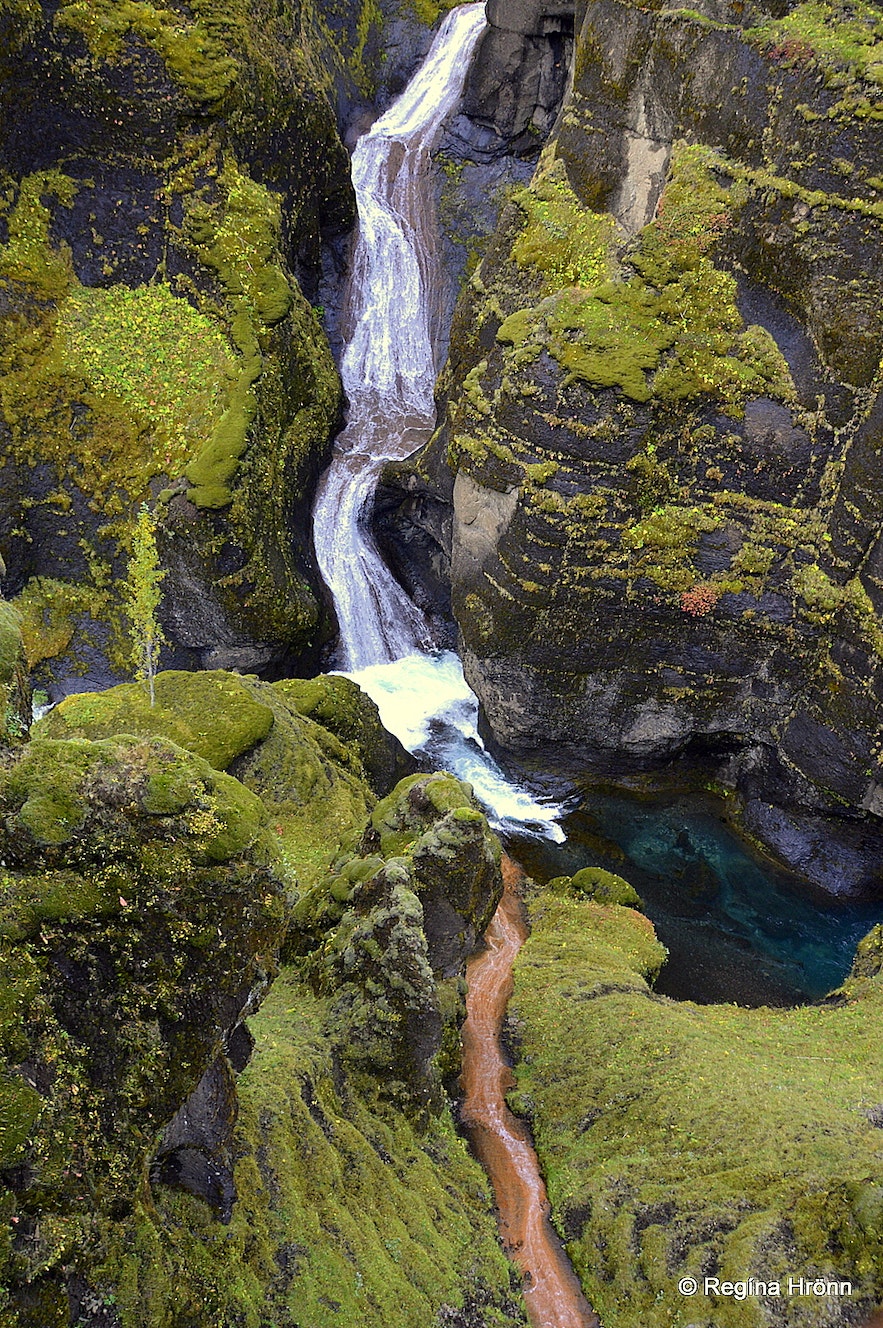 Mögárfoss waterfall - I love the spot where these rivers meet

The waterfall's name is Mögárfoss waterfall and it is so picturesque. I love this spot where Mögá river, Fjaðrá river, and the red creek join each other - each one of them is so beautiful.

A little bit further up the river, Fjaðrá is another waterfall, Fjaðrárfoss waterfall, which cannot be reached any longer due to nature protection.

Fjaðrárgljúfur is around 2 km long and 100 metres deep where it is deepest, and the canyon might be some 2 million years old.

Fjaðrá river, which runs through the canyon, is not a massive river so the canyon can also be visited from the riverbank, where you have to wade the river in some places.

I saw that done on the travel program, but I have only visited Fjaðrárgljúfur from the ridges above.

How Fjaðrárgljúfur was created 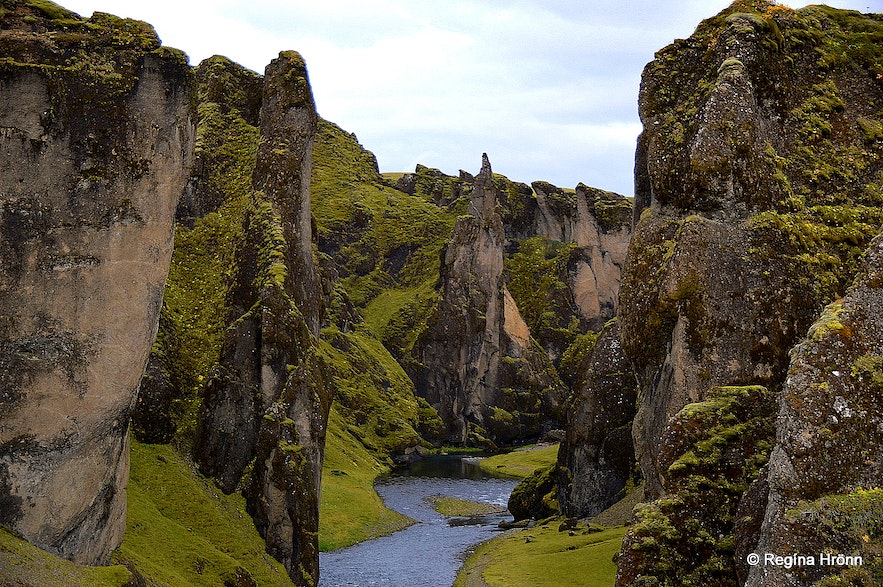 Some 9-10,000 years ago a forceful glacial river ran from the glacier edge through Fjaðrárgljúfur, creating this majestic canyon through the progressive erosion of the palagonite, leaving only the harder rock behind.

From what I understand when reading a geological explanation of the creation of Fjarðárgljúfur is that a glacial lagoon was created when the hard rock obstructed the glacial river. It then started digging out, as it were, this beautiful canyon and at last clearing the obstruction. 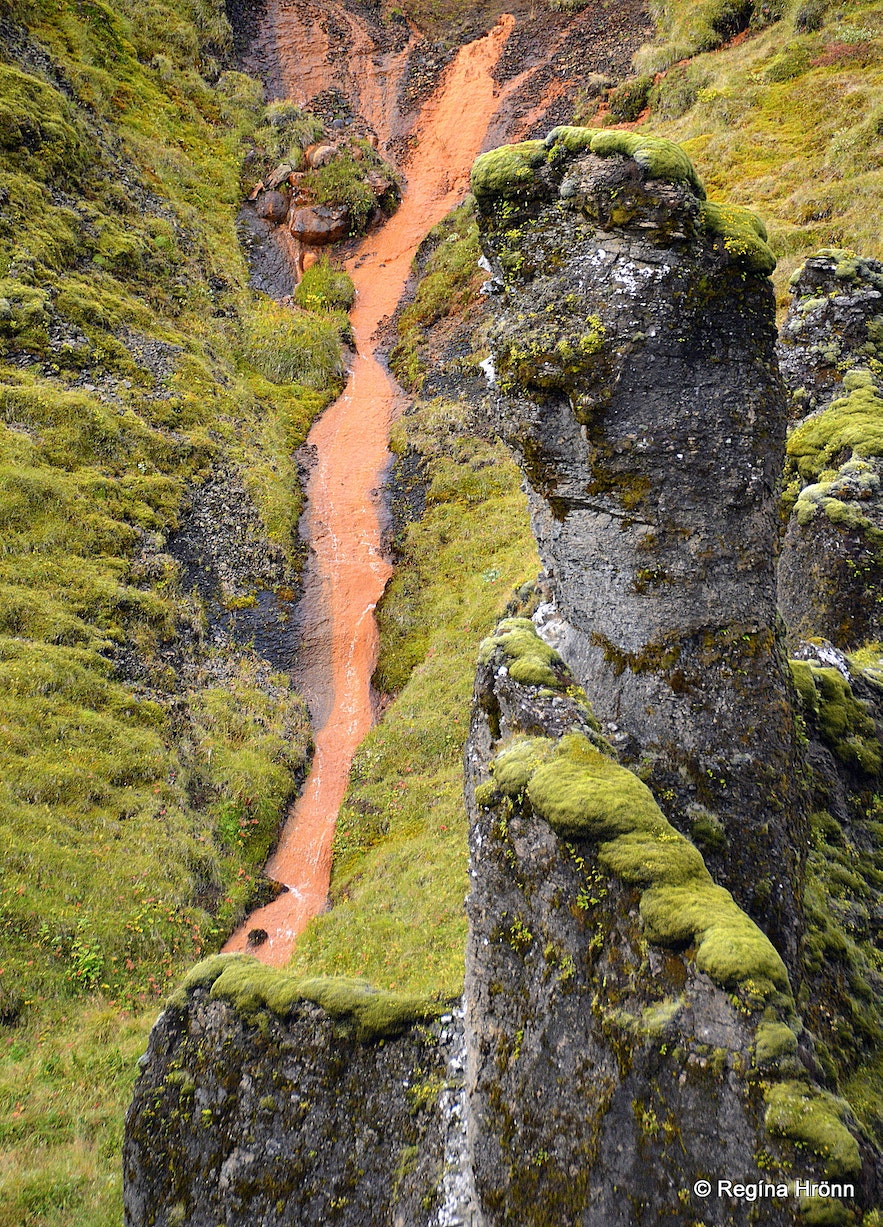 A red creek joins the river Fjaðrá in Fjaðrárgljúfur canyon

People were standing and sitting on all the ledges, as from there you get the best view of the canyon. You did this at your own risk though as it was dangerous. Now, these edges are fenced off.

Fjaðrárgljúfur canyon looks like it belongs to the world of the Game of Thrones TV series, and many of the scenes of GOT have been shot in Iceland. Recent scenes were shot here in Fjaðrárgljúfur, where you will see dragons flying in the canyon (minute 1:08).

Iceland featured in the new Game of Thrones trailer

Fjaðrárgljúfur is a national heritage site but has not yet been protected. Such a gem of nature should be protected, don't you agree?

Our Minister of Environment, Guðmundur, has been busy protecting a lot of beautiful sights in Iceland, kudos to him for a job well done :) I hope he protects Fjaðrárgljúfur soon. 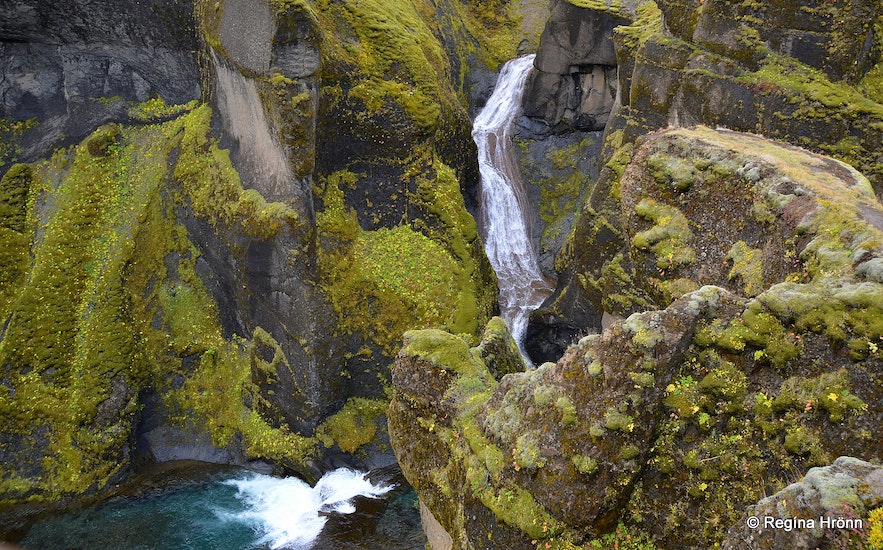 Fjaðrárgljúfur canyon is just west of Kirkjubæjarklaustur village and the distance to the canyon from Reykjavík is some 255 km. You can rent a car in Reykjavík and drive along ring road 1 in South-Iceland.

To reach the canyon you turn left on road 206 for Lakagígar. 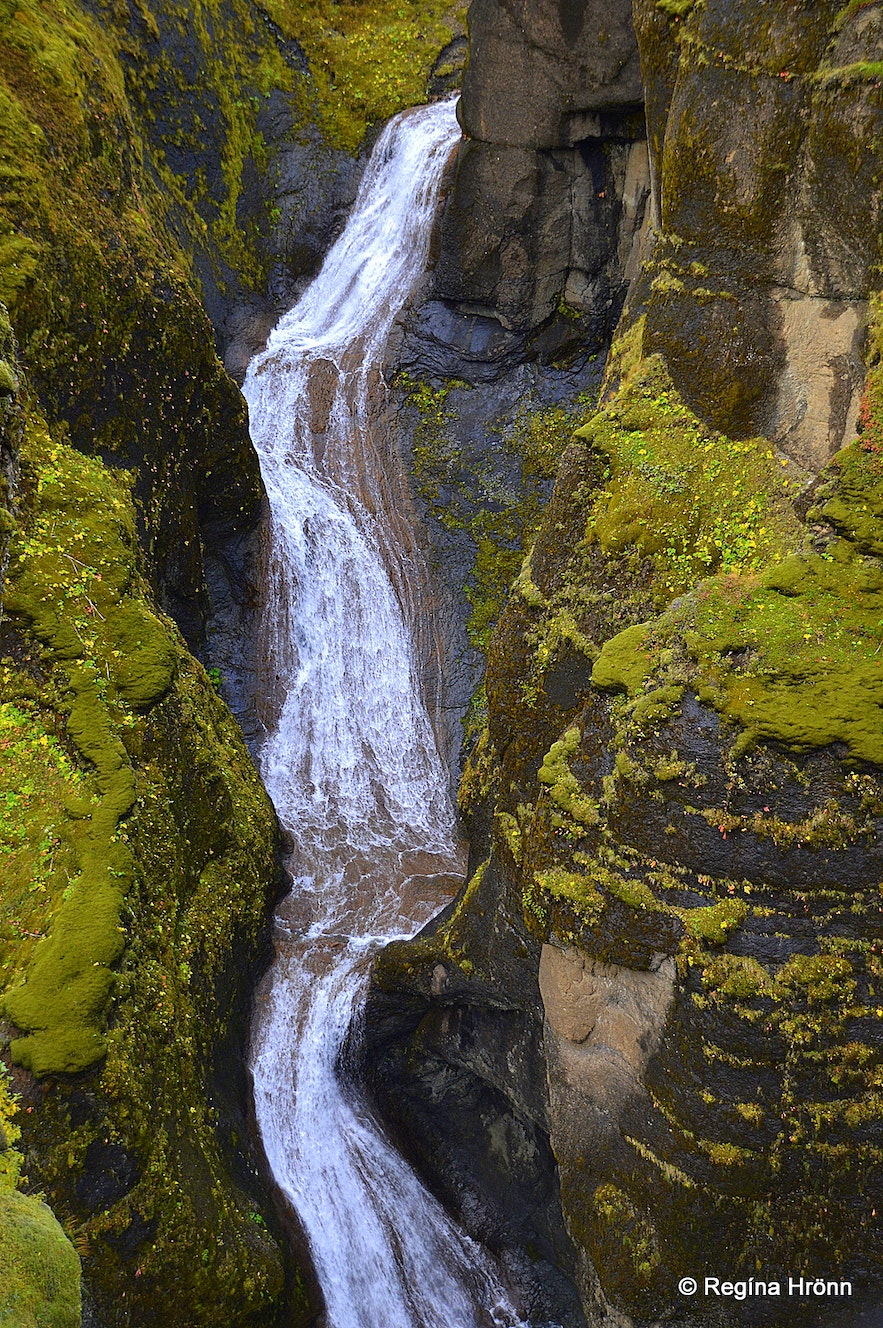 The canyon cannot be seen from the ring road, but it takes only a few minutes drive to reach it. After a couple of minutes, the road to Lakagígar will turn to your right and turn into F-206, only suitable for well-equipped 4x4 vehicles.

If you drive just a short distance up this road you will reach another parking lot and a path will take you to the observation platform by Mögárfoss waterfall.

But we continue driving on a gravel road until we reach Fjaðrárgljúfur.

The road leading to Fjaðrárgljúfur is suitable for all cars in the summertime.

There can be potholes after heavy rain, so drive slowly. 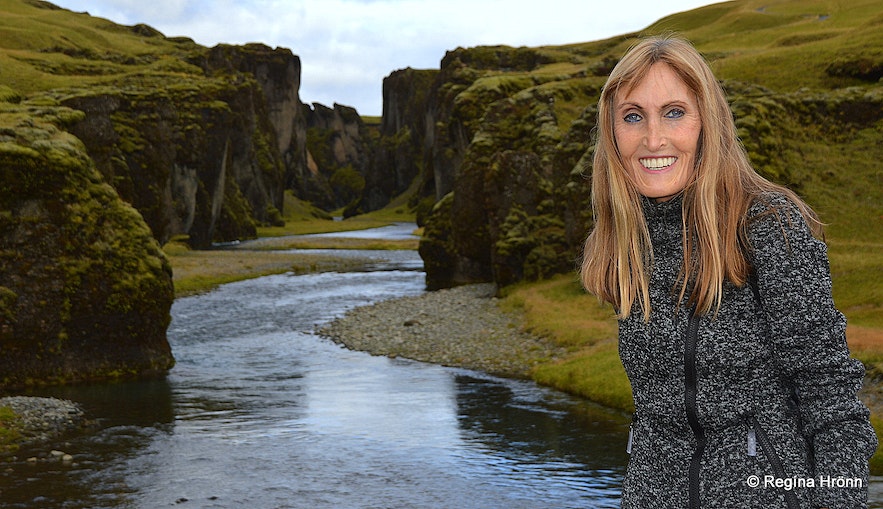 The view into Fjaðrárgljúfur canyon from the bridge in 2020

I have written other travel-blogs about Kirkjubæjarklaustur and the Elf City & Elf Church in the vicinity of Fjarðárgljúfur, which you might want to include in your visit to South-Iceland:

There are many other beautiful canyons in Iceland and I have written travel-blogs about some of them:

The Spectacular Stuðlagil Canyon - the Gem of East Iceland