There are few travel experiences in this world that have the power to move people to tears— and whale watching is one of them. The sight of a whale's fluke or the sound of it spouting water through its blow hole can be both magical and awe-inspiring.

Iceland is lucky to have some of the best whale watching areas in the world. More than 20 different species of whales live in the waters surrounding Iceland, which are favourable feeding area for whales due to the relatively shallow depth of the water and the long daylight during summer. 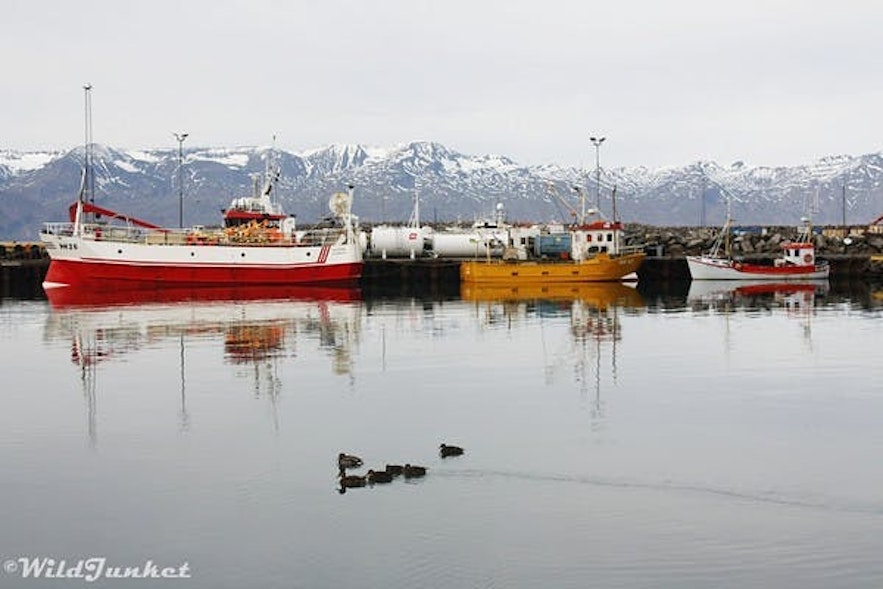 Poised on the edge of Skjálfandi Bay in northeastern Iceland, the fishing town of Húsavík is recognised as one of the best whale watching locations in the world. Sometimes called Europe's whale watching capital, Húsavík is THE best spot to see whales in Iceland. As with other areas in the north, the humpback whale is the most common species in this area.

Húsavík owes its world-famous reputation to the thriving ecosystem in the bay. Melting snow and rivers bring nutrients from mineral-rich locations which, along with the long lasting summer sun, leads to bountiful masses of plankton, the main source of food for whales. During your stay in Húsavík, don’t miss the whale museum in the center of town. 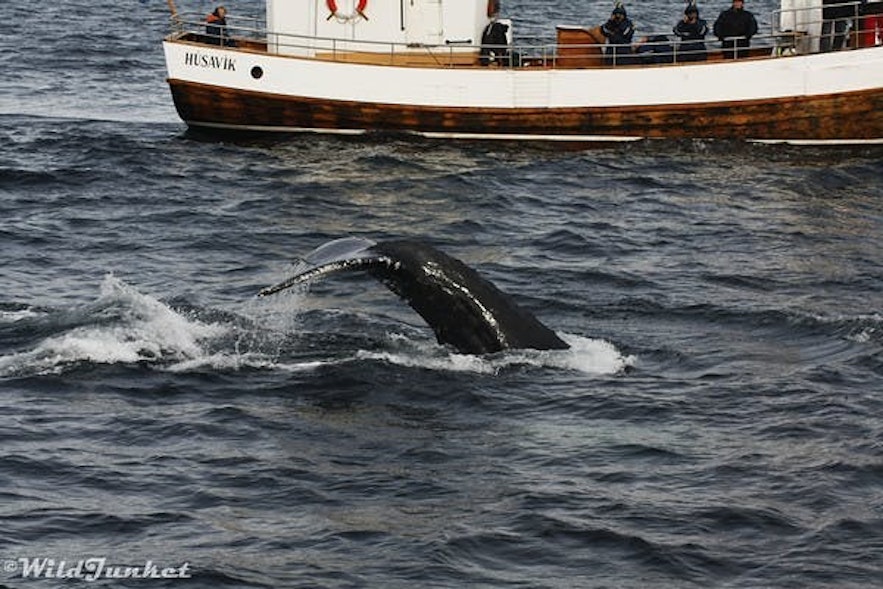 A variety of companies offer whale watching tours in Húsavík using different vessels. You'll find all the ticket offices/booths on the main street of Húsavík and the tours depart from the harbour, which is just steps away. The oldest whale watching company in Húsavík is North Sailing, which has been operating since 1995. All their boats are lovely traditional, environmental friendly schooners. During their whale watching tours, you will also make a stop at a puffin island where thousands of birds nest during summer. You can book this tour here. 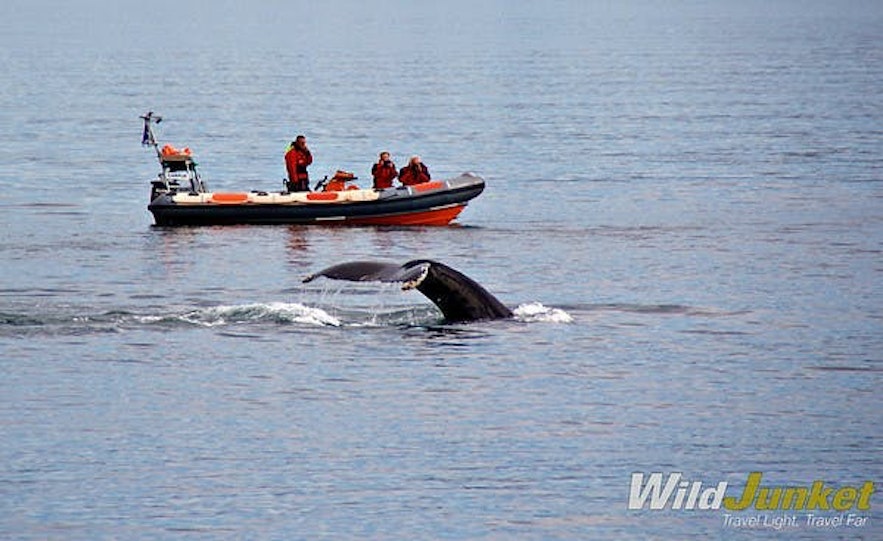 Also in the northeastern coast of Iceland is Akureyri, the largest town outside of Reykjavík. It's located close to Húsavík, but there are more choices for tours here and the city has more activities and sites that can fill your day after you finish your whale watch tour.

Most whale watching tours in Akureyri will bring you into Iceland’s longest fjord, Eyjafjörður. Because of its location, the fjord is sheltered from the strongest winds and highest waves. 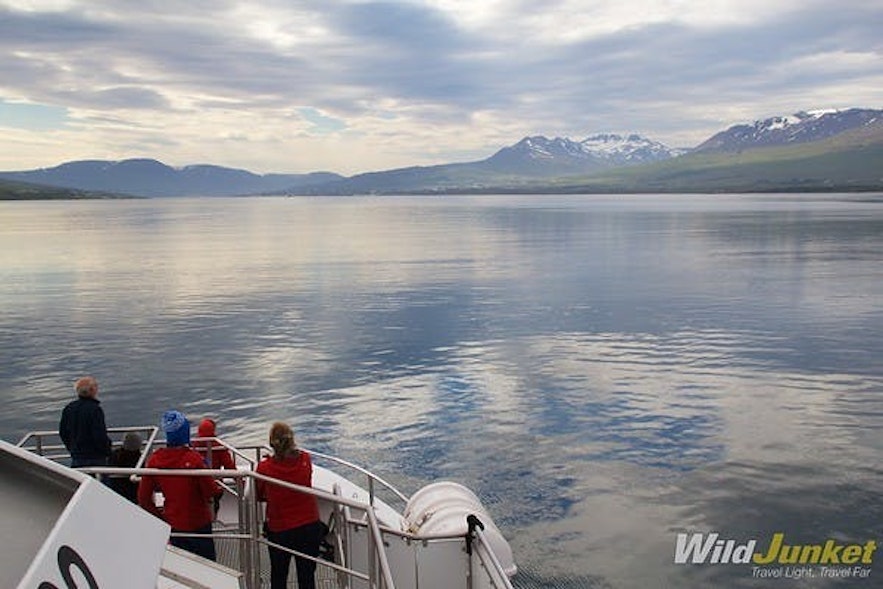 That is why Akureyri whale watching tours are particularly suitable for families with smaller children, elderlies and people who tend to get seasick. As in all other whale watching spots in northern Iceland, the main species seen in Akureyri are humpback whales, though minke whale, dolphins and harbour porpoise can be spotted sometimes.

Whale Watching Akureyri is one of the most experienced and trustworthy operators in Akureyri. It operates from the floating pier at Hof Cultural and Concert hall in the heart of downtown Akureyri. Their tours take place on sizeable modern boats with warm indoor cabins. The sighting success in 2017 has been 100%! You can book your whale watching tour here.

Whale Watching in the Capital: Reykjavík 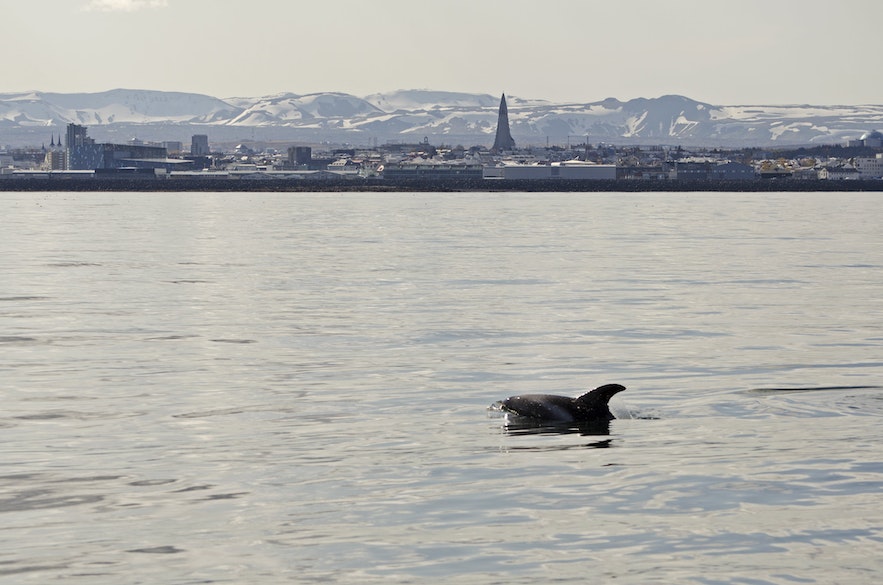 It comes as a surprise to many that the capital city itself offers some of the best whale watching opportunities in Iceland. The convenience of whale watching in Reykjavík is certainly one of the reasons why it's so popular with travellers, but it is not the only reason to come here.

Reykjavík is located next to a large bay named Faxaflói, which has rather shallow, nutrient-rich waters popular among minke whales. It is also common to spot white-beaked dolphins, harbour porpoises, humpback whales and puffins in the area. Best of all, whale watching tours from Reykjavík are available all year round, though chances to see whales are higher during the summer months. 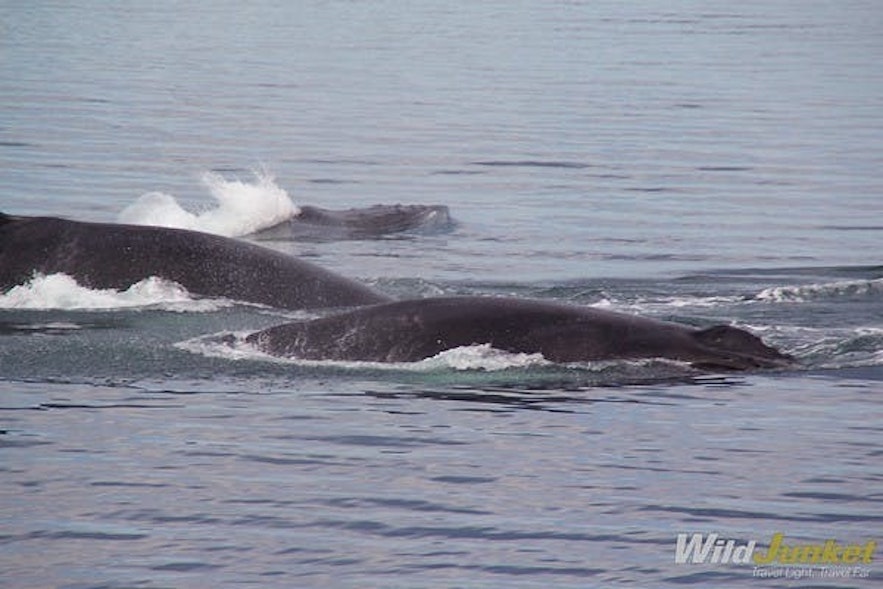 Most whale watching tours leave from Reykjavík’s Old Harbour. As tours tend to last three hours or less, you'll be able to enjoy an incredible experience without taking up even half a day of your trip.

This also means that if a tour is cancelled due to weather or if you didn't spot any whale, you can easily join another tour for free. Book your whale watching tour from Reykjavík here. 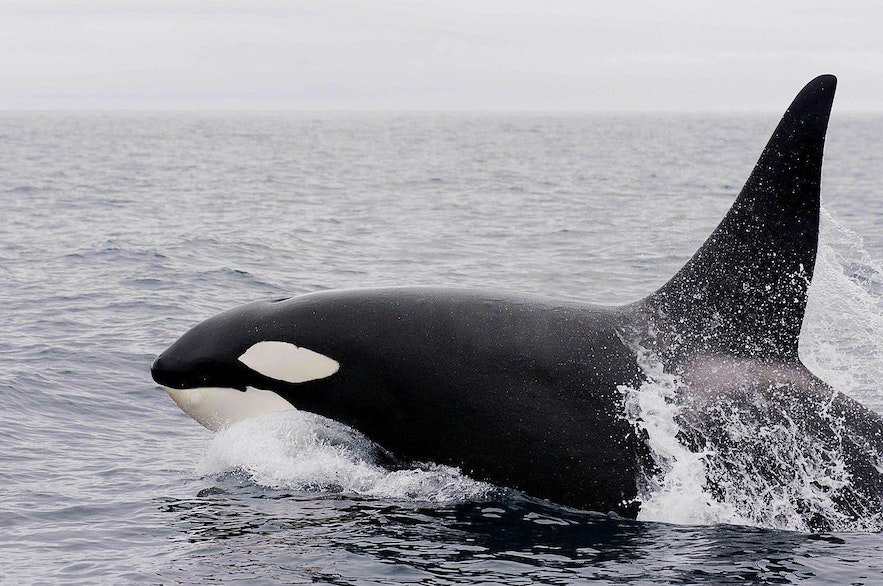 Most travelers head to the Snæfellsnes Peninsula for its spectacular natural sights, but few know about the marine life here. Avid whale watchers will be surprised to know that this is the best spot in Iceland to spot orcas, or killer whales. Chances to see those unique mammals are especially good during winter and spring. Orcas live all around Iceland, but tend to be transient; that is, they move where the food goes. They are thus rarely seen in other parts of the country reliably. 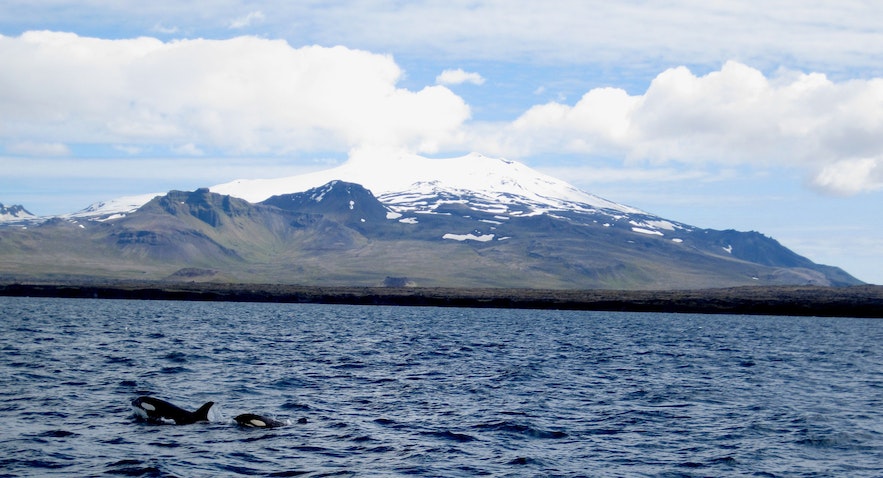 Another rare whale species that visits this area (mainly in June) are sperm whales, the largest toothed whales and one of the deepest diving whales. In summer, it's also common to spot minke whales, humpback whales, white-beaked dolphins and harbour porpoises.

There is only one whale watching operator in Snæfellsnes peninsula, and the tour leaves from the town of Grundarfjörður, taking you into Breiðafjörður fjord. During winter, the tour commonly takes place on a traditional oak boat. During summer, and when the whales are further from shore, the tour takes place on a modern passenger boat. Places/seats are limited, and the tours are normally fully booked a few days in advance. We recommend securing your place on the boat well in advance. Please book your whale watching tour from Snæfellsnes here. 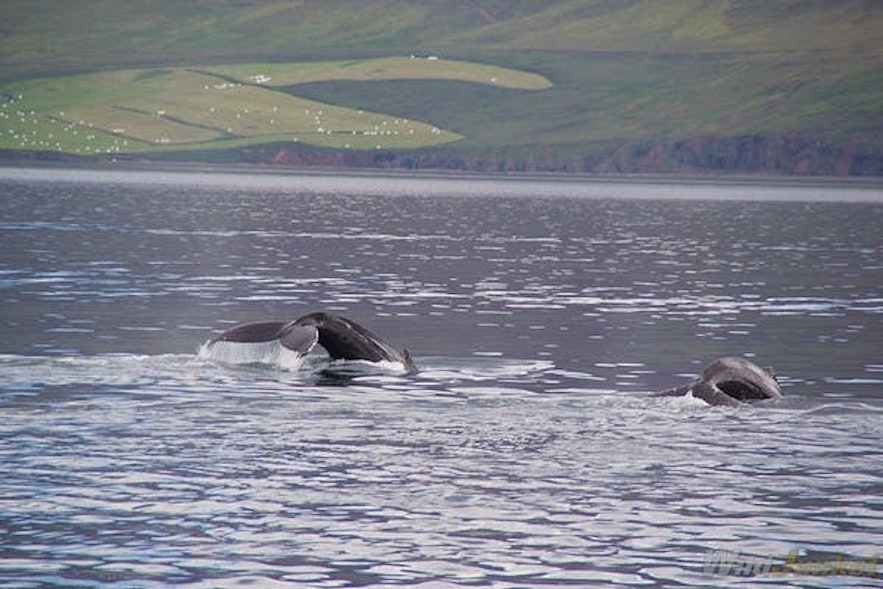 Whale watching tours in Hólmavík, the Westfjords, only started running in June 2017, so they are still a secret amongst travellers. This part of Iceland is relatively remote and unspoilt, and it’s brimming with dramatic landscapes, natural geothermal pools and puffin nesting grounds. If you are driving the Iceland Ring Road and want to see whales without the crowds, then come here for a completely genuine experience.

Steingrímsfjörður bay surrounding Hólmavík is very calm and the boat doesn't need to go far from the village to spot a whale. The most common whales to be seen in Hólmavík are humpback whales, the most acrobatic of all of the great whales. If you are lucky, you might see them breaching or tail slapping. Láki Tours, the only tour operator in Hólmavík, runs whale watching tours three times a day in summer at 09:30, 14:00 and 16:30. The tours depart from Hólmavík harbour and they take around two hours. You can book the tour here. 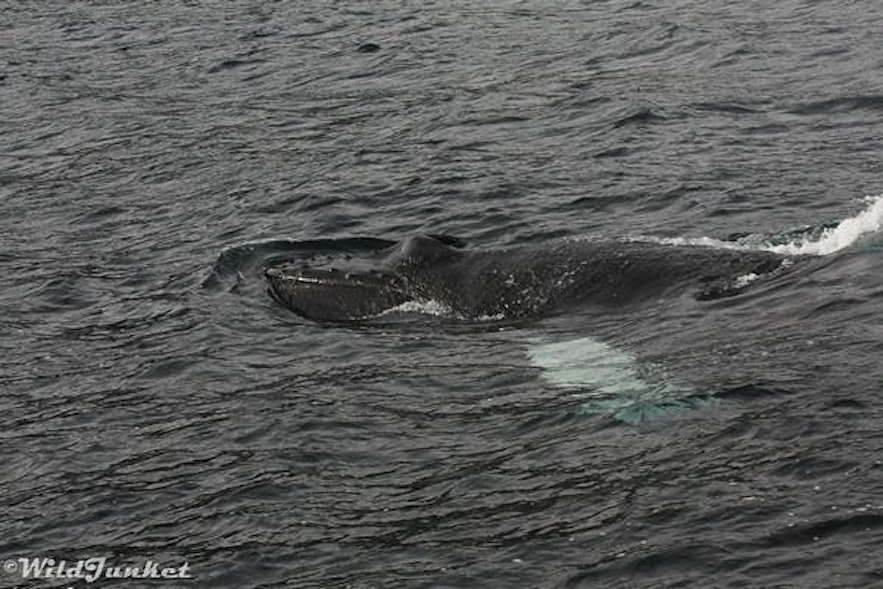