The majestic Grenjaðarstaður Turf House in North-Iceland and my Ancestors

I am a big fan of the traditional turf houses in Iceland and my favourite Icelandic turf house is to be found in North-Iceland, called Grenjaðarstaður turf house.

The turf houses in Iceland are in my opinion so typical for Iceland. I love visiting them and always seek them out on my travels in my country. Grenjaðarstaður turf house is located in North-Iceland, between Mývatn and Húsavík - the Whale Watching capital of Iceland.

I visit Grenjaðarstaður every year and you will see why if you read a little bit further on in my travel-blog :) 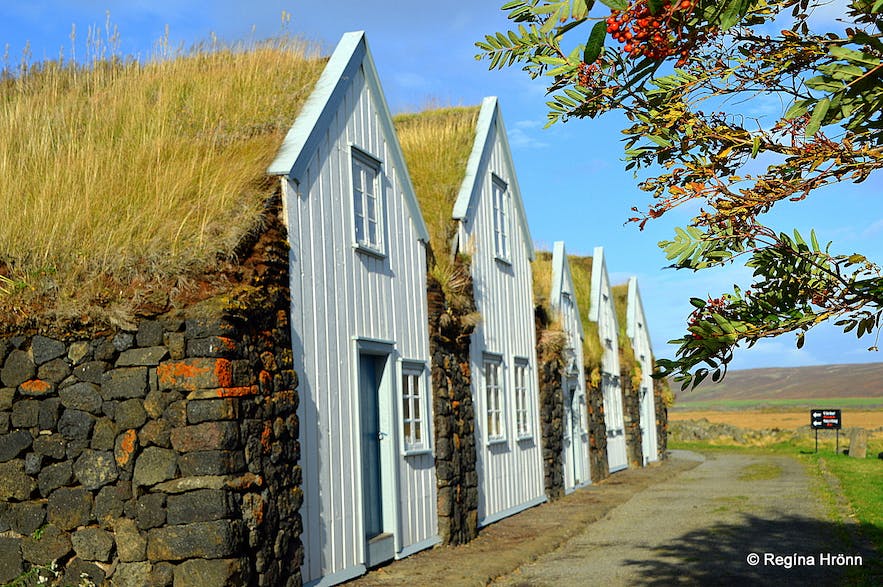 There was a homestead here at Grenjaðarstaður from the early settlement of Iceland over a thousand years ago. Grenjaður Hrappsson settled this area and lived at Grenjaðarstaður, which is named after him. Many ancient place names in Iceland can be traced to the settlers.

The present turf house dates back to the 19th century, and the oldest parts of it date back to 1876. The majestic turf house at Grenjaðarstaður was the largest manor in this county, 775 sq.m!

This building material, turf or sod, was used as it was cheap and convenient. It insulated the houses and kept the cold out. The outwalls of Grenjaðarstaður are made from doubly stacked lava, of which there is plenty in this area, and no turf is used in the outwalls of this turf house. Lava was the building material in the areas of Iceland, where there is volcanic activity. 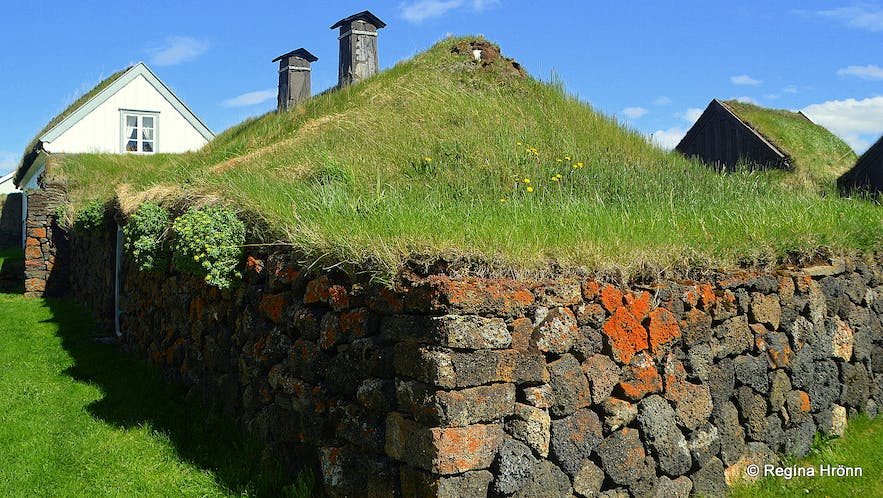 Rev. Benedikt Kristjánsson (1840-1915), my great-great-grandfather, became a minister at Grenjaðarstaður in 1876. He restored Grenjaðastaður completely in 1892-1894, apart from the door to the east and the northern parlor.

Benedikt had a big family, domestics and many old people were living at Grenjaðarstaður as well. 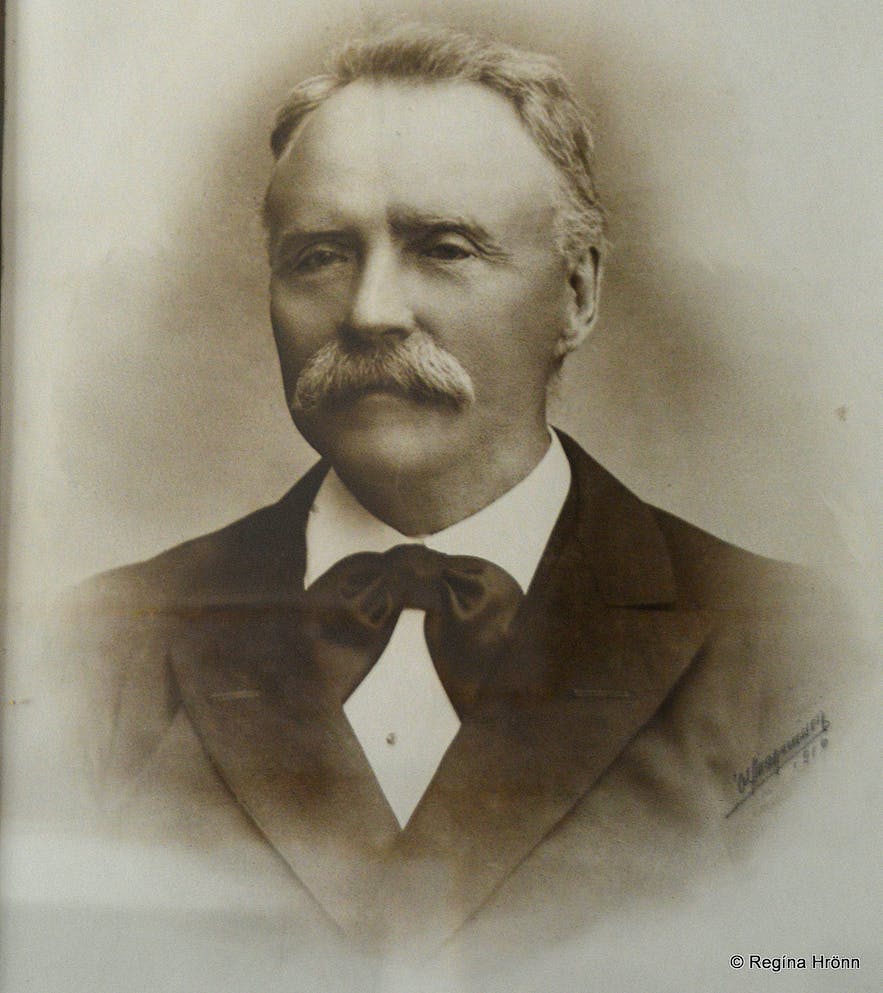 Benedikt Kristjánsson was the minister at Grenjaðarstaður from 1876-1907 - and then managed Grenjaðarstaður until 1911 (ref. Íslendingabók). When you visit Grenjaðarstaður turf house you will see the photos of my great-great-grandparents hanging on the wall in the first room you enter to the left.

There the photo of Rev. Benedikt is mounted on the wall between his two wives; Regína on his left-hand side, and his second wife, Ásta on his right-hand side. 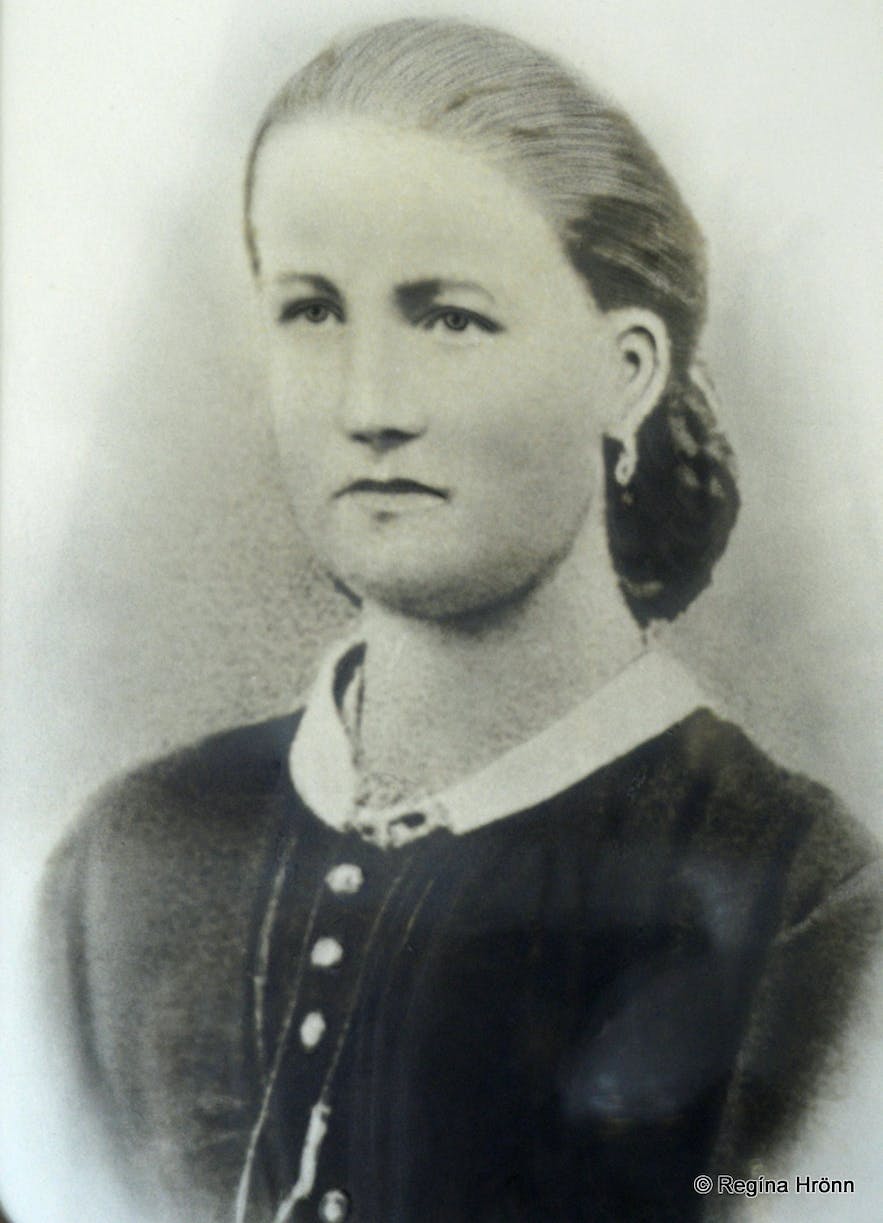 I have been told that Regína most likely died of a broken heart after the loss of 4 of her small children to complications following the measles in 1882. From late July until the beginning of December 1882, my great-great-grandparents had lost half of their children: Kristján (6), Gunnar (3.5), Ingibjörg (2), and Rannveig (8 months old) :( 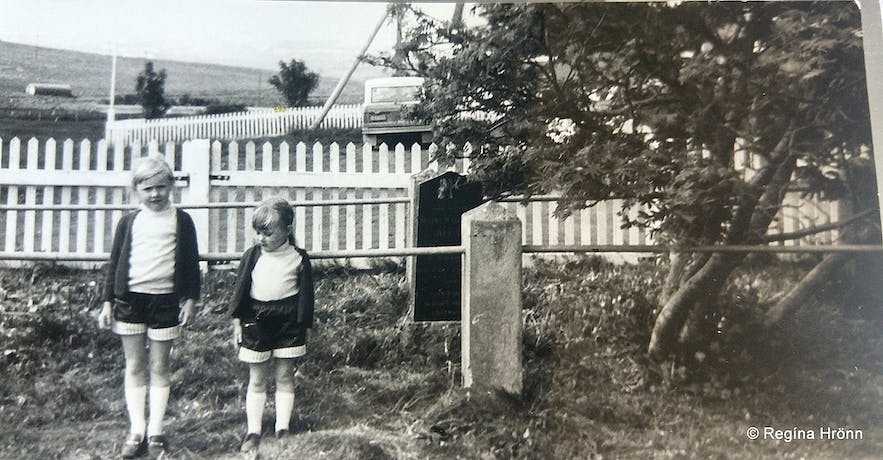 Visiting Regína's grave with my family back in 1969

My great-grandfather, Bjarni, who was 5 years old at the time this tragedy struck my ancestors, lived a long life and had 15 children of his own.

Regína also got measles and was pregnant with her 9th child at the time, a girl born on the 1st of March 1883, Kristjana Ingibjörg, who fortunately lived a long life. But my great-great-grandmother wasted away, got consumption, and died a year and a half later, in 1884. 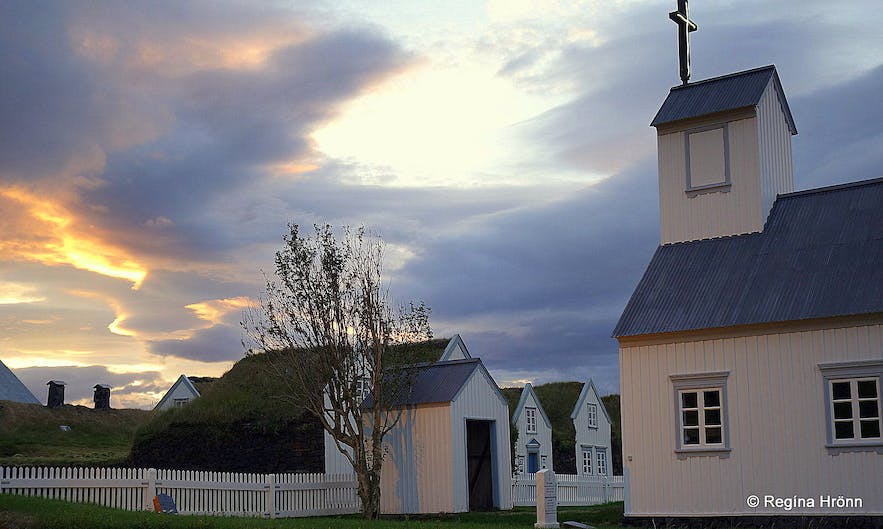 On top of this tragedy, the weather was horrible in 1882 and this period from 1881 has been called "Frostaveturinn mikli" - or the Winter of the great Frost, with drift-ice closing the harbours, and snowstorm raging until mid-June, and storms blocking the sun from the 4th of August until the 29th of August! (Icelanders had another winter like this also called "Frostaveturinn mikli" in 1918).

The crop failed and the situation in Iceland was so grave that friends of Iceland in Denmark, Norway, Germany, and England collected money for grain which was then shipped to Iceland.

Benedikt was so devastated that he wanted to give up his ministry at Grenjaðarstaður, and he was so grief-stricken that he said he had lost his faith in God. And who can blame him :(

Rev. Benedikts faith was restored by a religious experience he had when he was riding back to Grenjaðarstaður from Húsavík and got stuck in the river. His son Bjarni (my great-grandfather) woke up from his sleep believing that his father was calling him. He searched for his father but didn't find him. So he went outside and saw his father's horse standing by the river.

He ran to the river and saw his father stuck in the river and was able to get help from a nearby farm. There was no way that my great-grandfather could have heard his father calling from this distance. 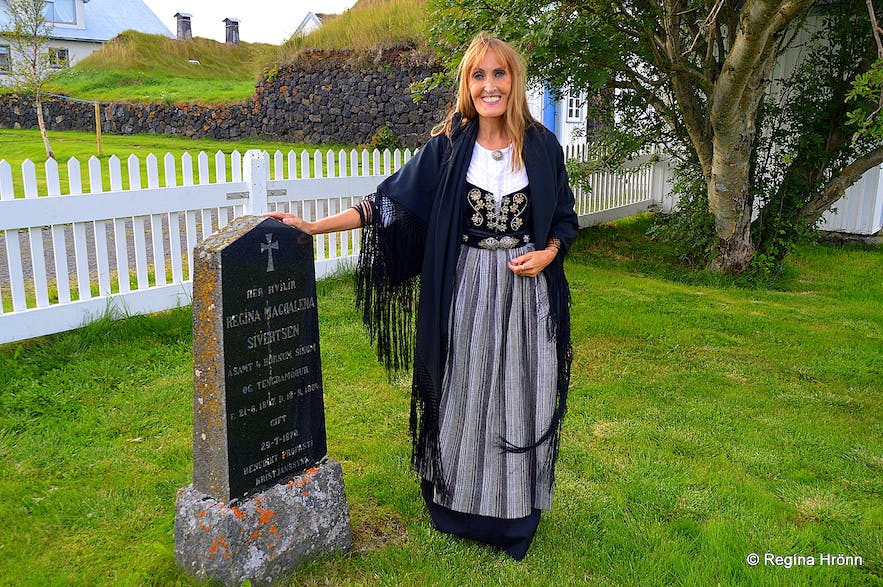 By my great-great-grandmother's Regína's grave where she is buried with her 4 children and her mother-in-law, Sigurlaug (died in 1901)

I am named after my great-great-grandmother Regína and when I travel in this area I always go visit her grave and tell her the latest news of her descendants in the SW-corner of Iceland.

Her grave is located 454 km away from my home in Reykjavík, so it is a bit far for me to visit her grave, but seeing that my husband's family owns a summer cottage at Mývatn, then we visit this area every year.

A gravestone with runes

In some of the photos I am wearing the national costume upphlutur, which I was wearing for the 140th anniversary of the annex church from Grenaðarstaður, Þverá church in Laxárdalur in the vicinity of Grenjaðarstaður.

In the graveyard next to Regína's grave you will find a gravestone with runes from the 15th century. 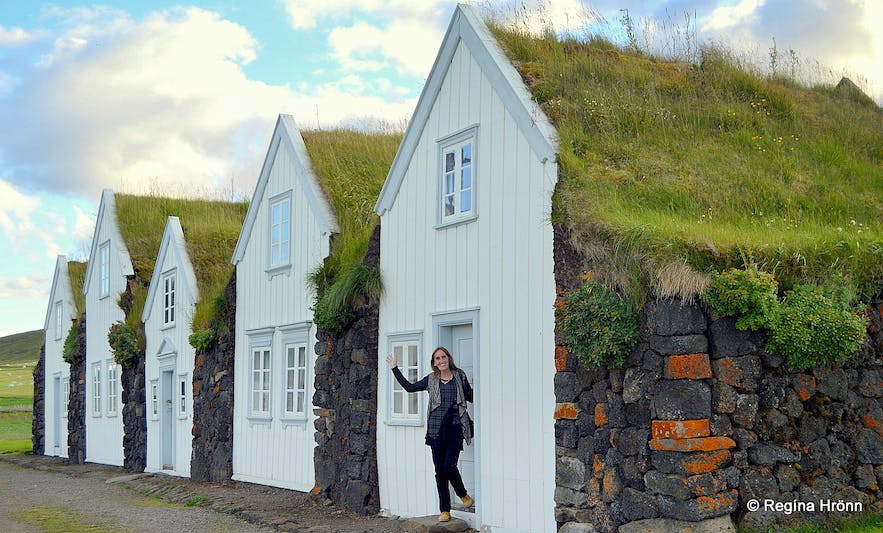 The rooms are kept pretty much like they were when people used to live at Grenjaðarstaður. For me, it is a delight visiting this old manor seeing how my great-great-grandparents lived. 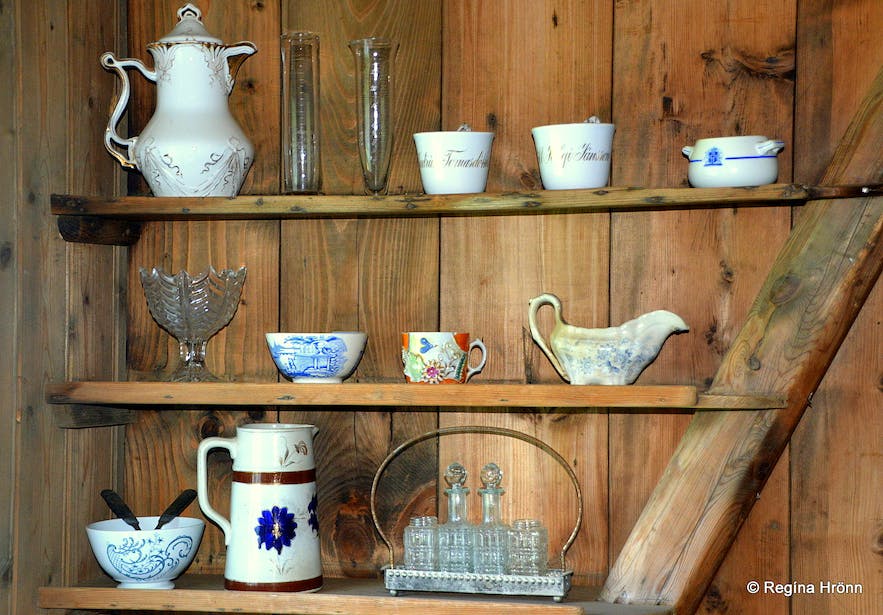 The rooms are full of old items from the district. When Grenjaðarstaður was turned into a museum in 1958 the locals from this district donated over thousand objects to the museum. I especially like the kitchen, seeing all these old lovely plates and old kitchen utensils.

Visiting the museum at Grenjaðarstaður gives great insight into the ways the more affluent people lived in the 19th century in North-Iceland, even though this mansion was much larger than the usual turf houses.

The floors of Grenjaðarstaður are wooden, but one room has got beaten dirt floors. I have seen these dirt floors in other turf houses and they are very comfortable to walk on. 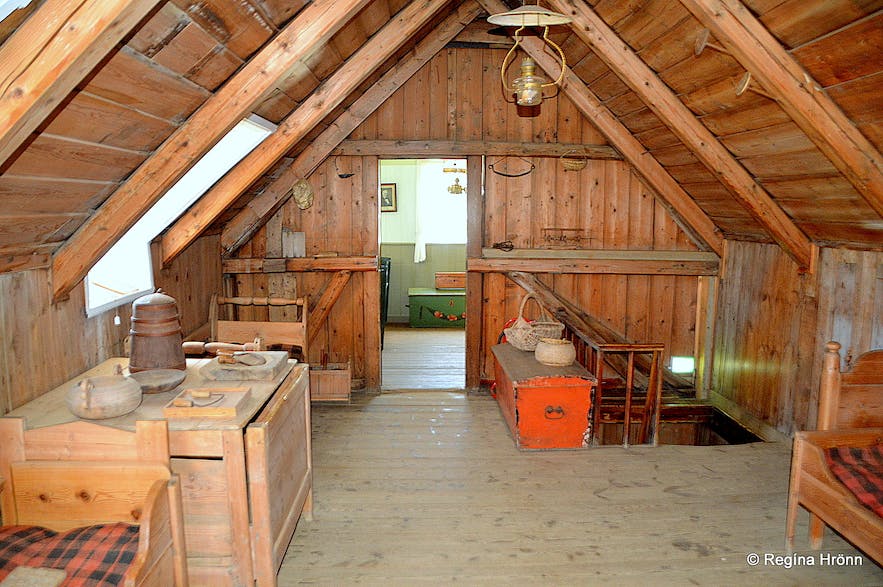 Grenjaðarstaður turf house is owned by the National Museum of Iceland and run by the district museum of this area. It is open daily from 1st of June - 31st of August from 10-18. 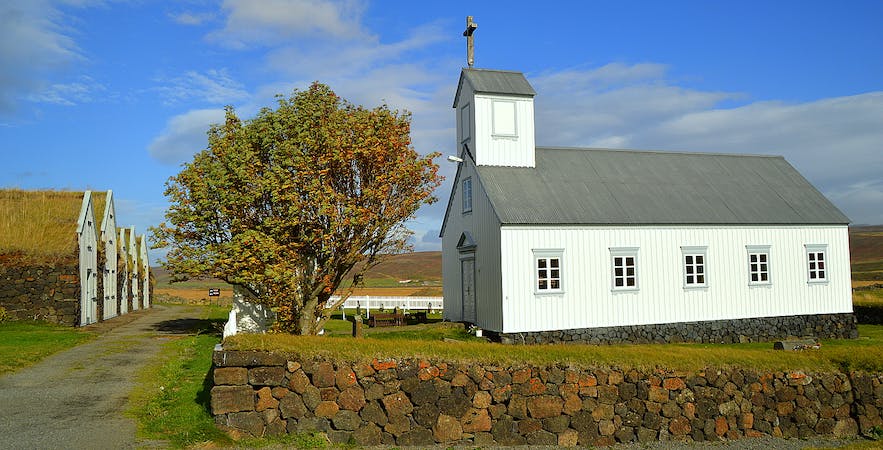 Opposite Grenjaðarstaður in Aðaldalur you will find a lovely preserved church, Grenjaðarstaðakirkja. The current church was erected in 1865 by Rev. Magnús Jónsson, but earlier there were Catholic turf churches here dedicated to Bishop Martein from Tours in France.

The altarpiece in Grenjaðarstaðarkirkja church, which was donated by a minister of the church, dates back to 1865. Belonging to the church is also a chalice from 1870 and two old copper candlesticks. 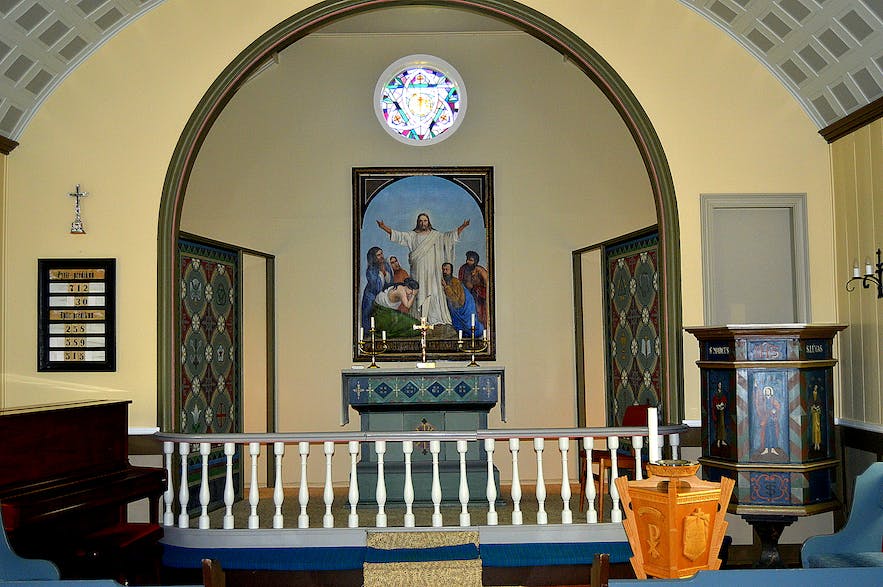 The year 1797 is painted on the pulpit and the initials of Tómas Skúlason, who was the minister of the church back in 1785-1808.

The church bells in the bell canopy in front of the church are also old by Icelandic standard, dating back to 1663 (the bigger one) and 1740 (the smaller one). 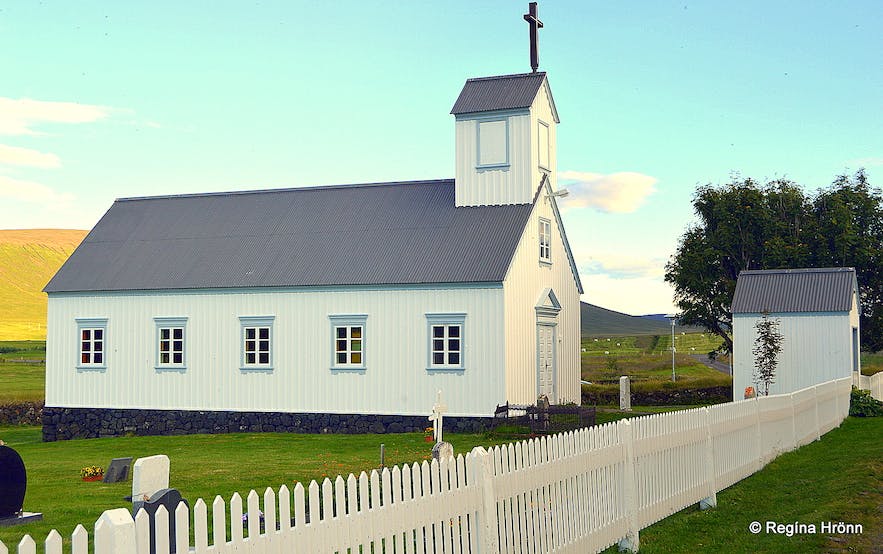 Benedikt's and Regína's son and my great-grandfather, Bjarni Benediktsson (1877-1964), married my great-grandmother, Þórdís Ásgeirsdóttir (1889-1965) from West-Iceland, and moved to nearby Húsavík, where they had 15 children, including my grandmother.

Which makes me 1/4 Húsvíkingur as the locals of Húsavík are called. At the lychgate of Grenjaðarstaðakirkja church

My husband took some photos of me wearing the national costume, as we both thought that it would be nice for my travel-blog. It is not often that I get the opportunity to dress up in upphlutur so why not make the most of it.

This is the national costume of Björg, the nanny of my great-grandparent's children and I am very grateful that my extended family trusted me with it, and wear it with pride :) 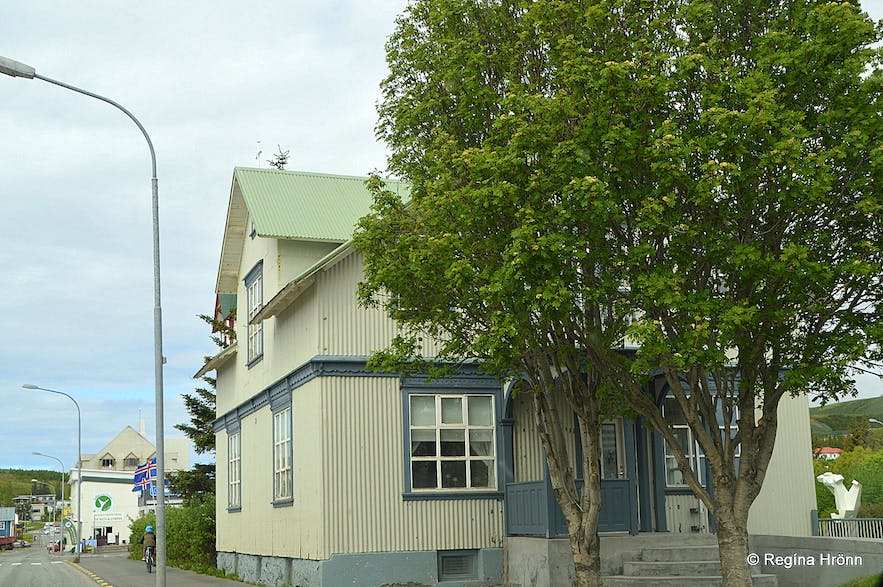 Bjarni and Þórdís lived in Bjarnahús, the house next to the beautiful church Húsavíkurkirkja, which is the landmark of Húsavík. Bjarnahús is now the congregation hall for the church and on the wall, you will see paintings of my great-grandparents. Þórdís, my great-grandmother is wearing the national costume peysuföt.

I have written a travel-blog about Húsavík - the Whale Watching Capital in Iceland where I have added more photos and information about my ancestors. Both these places, Grenjaðarstaður and Húsavík are very close to my heart, so this travel-blog has turned into a blog about my ancestry.

My great-grandparents, Þórdís and Bjarni, the first owners of Bjarnahús

But by now I have written 280 travel-blogs about different locations in Iceland so maybe it is fitting to dedicate a couple of my travel-blogs to my ancestors who lived in the places I am showing you, and I hope that you, who read my travel-blog appreciate it.

My roots are also at Ingjaldssandur in the Westfjords of Iceland and in Grundarfjörður in West-Iceland, you may know it as the fjord with the most-photographed mountain in Iceland, Mt. Kirkjufell 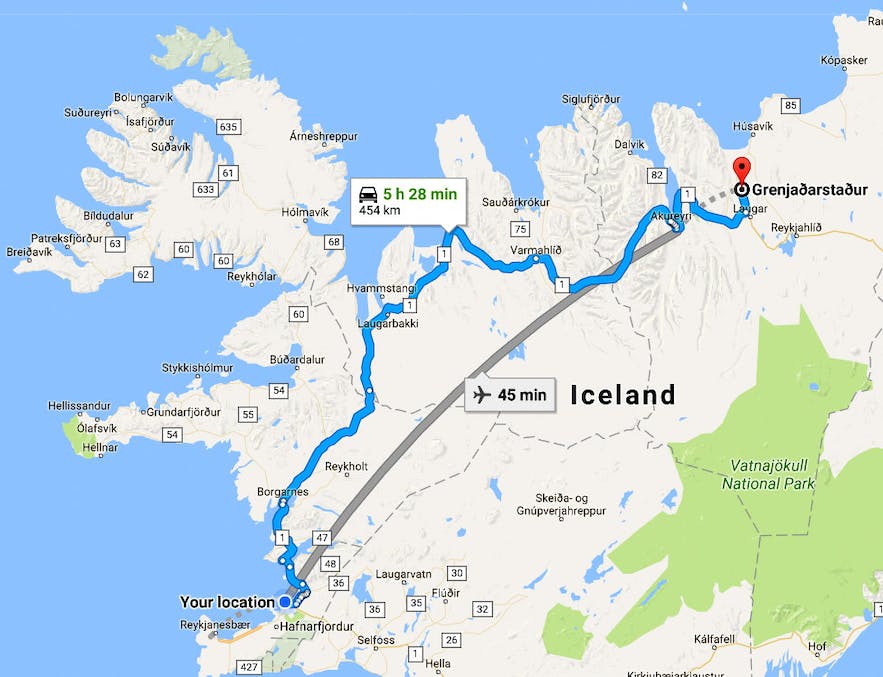 Don't miss visiting a turf house while in Iceland. I am so fond of them that I seek them out on my travels. I have added travel-blogs about all the turf houses in Iceland now.

The turf houses closest to Grenjaðarstaður are at Þverá and Grænavatn in Mývatn. The turf houses are delicate though so they cannot withstand too much traffic.

You can rent a car in Reykjavík and drive up north on your own to visit Grenjaðarstaður and Húsavík.

Have a lovely time at Grenjaðarstaður :)