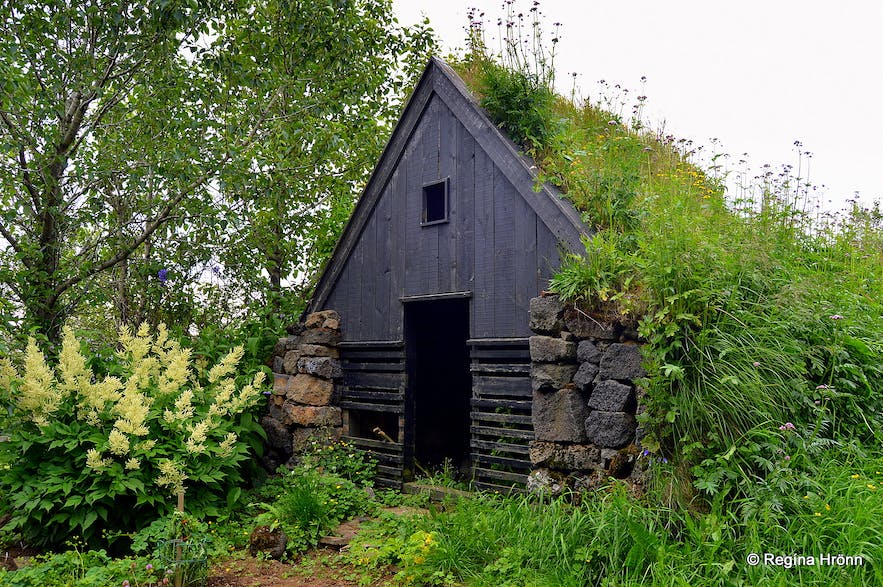 Now that I have written about almost all of the remaining turf houses in Iceland I am going to show you the turf farm at Íslenski bærinn at Austur-Meðalholt in Flói in South-Iceland. Íslenski bærinn actually means the Icelandic turf farm.

Almost all of the remaining turf houses and turf churches in Iceland belong to the Historic Building's Collection of Þjóðminjasafn Íslands - the National Museum of Iceland. But not the turf farm of Austur-Meðalholt, it is in the possession of the farmer and artist Hannes Lárusson, who maintains the turf farm himself. 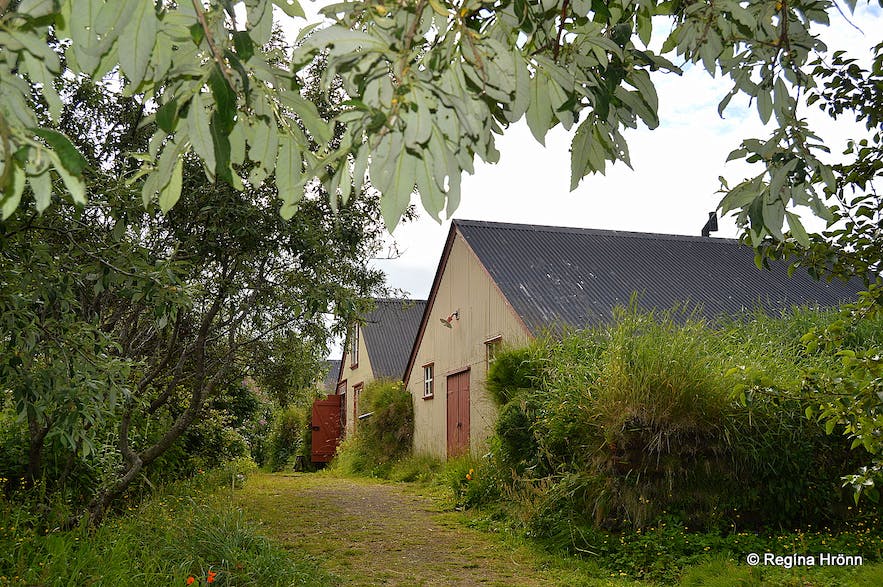 The turf houses at Austur-Meðalholt, which date back to the 19th century, are hidden away from sight in a beautiful grove just a short walk from the new building housing the photo exhibition.

The main turf farm consists of 4 houses, a barn and stables - all in all, 8 buildings. Hannes will walk you to the turf farm and show you inside and explain the ways of living in the olden days - or maybe not such a long ago as Hannes himself was raised on this turf farm. 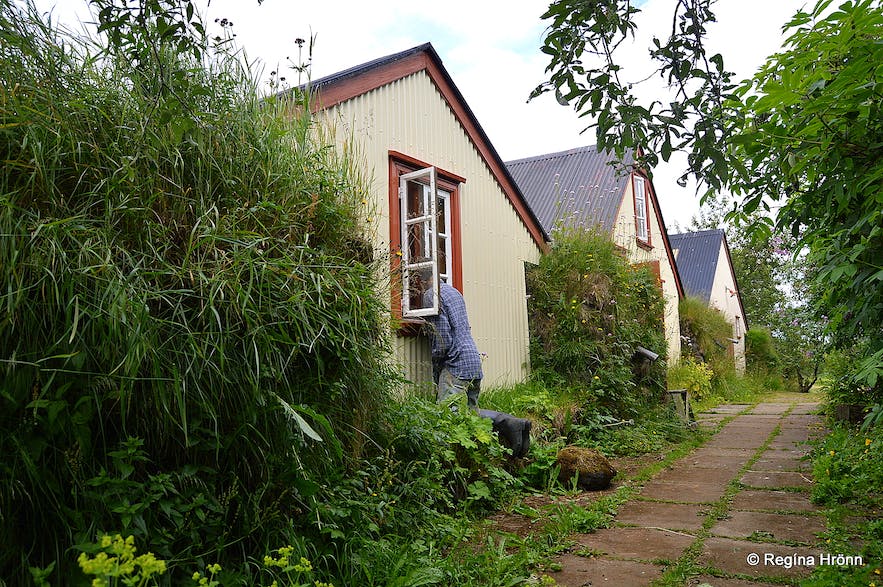 There is also a brilliant photo exhibition at Íslenski bærinn, with old photos, drawings and models of old turf houses around Iceland.

On the west side of the turf farm, there is a potato and cabbage plot. As the trees grow so close to the farm then I could only take photos from the side and not of the front of this lovely turf farm. You can see Hannes by the window talking to other visitors while I had a look around the turf farm. 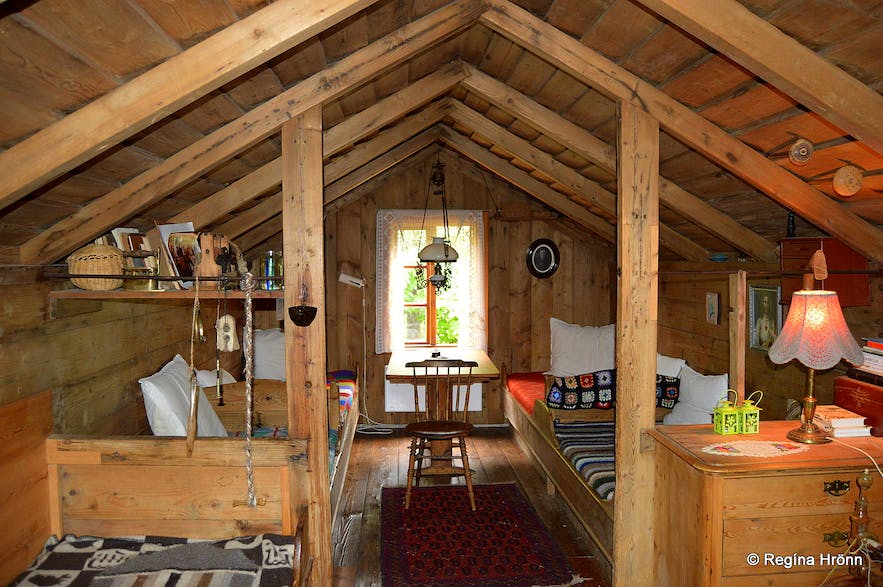 Inside the turf farm, you will find the baðstofa or main living room, where people would eat, work and sleep. In all the turf houses the baðstofa was panelled, so on the inside, it looked like a timber house. When the Austur-Meðalholt turf farm was rebuilt, the entire baðstofa was disassembled and all of the pieces of wood were washed separately with green soap before being put in their right place again.

There is also a hearth kitchen with old pots and pans. And a lovely furnished blue room. 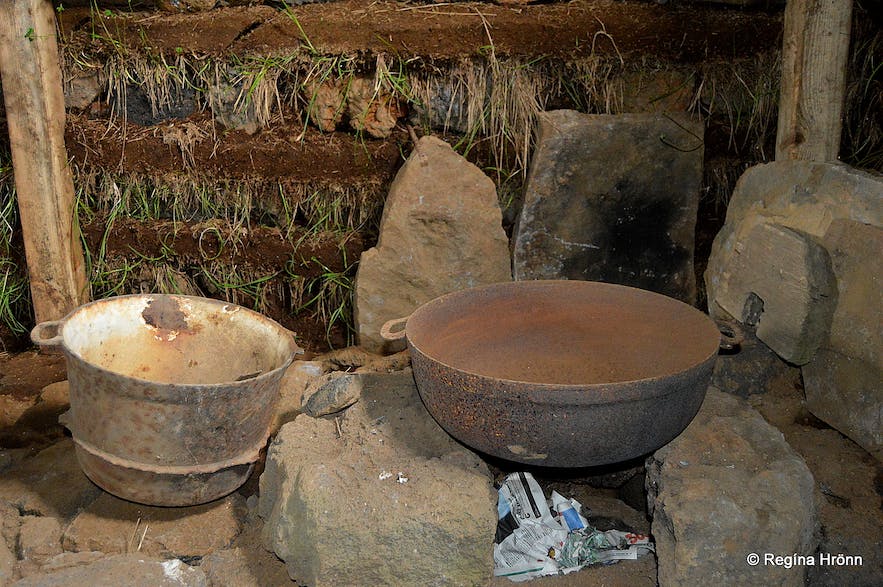 The earthquake in 1896 caused a lot of devastation and several of the turf houses in this area collapsed. Fortunately, the turf farm at Austur-Meðalholt stood upright, probably due to it being newly built.

The turf farm at Austur-Meðalholt is a typical turf farm of the "sunnlenskur" type of farm. Adjacent to the turf farm is a hovel for drying food, a barn and a storehouse. 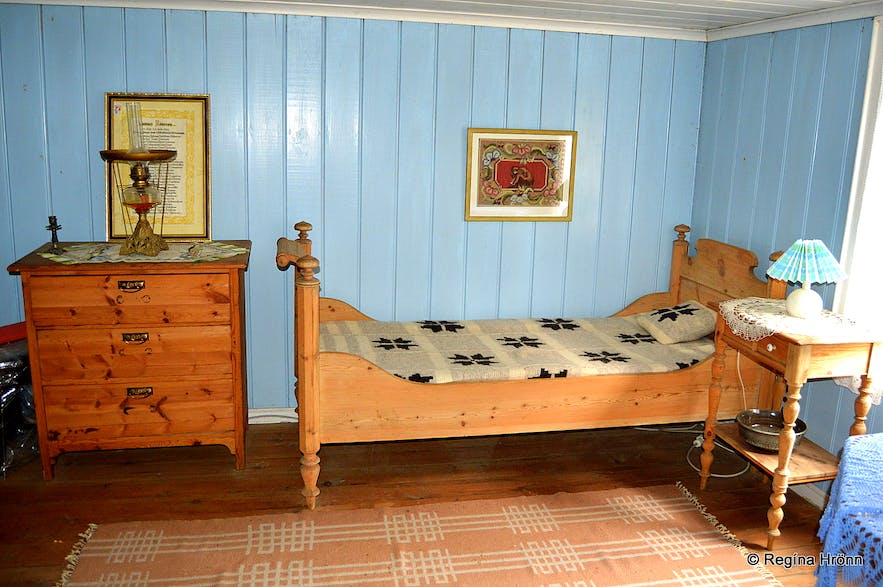 People lived on this farm for the next 70 years or until 1965 when it was abandoned. It stood abandoned for 20 years and was little by little mouldering. In 1985 the farmers at Austur-Meðalholt started repairing and renovating the turf farm with the help of professionals in this field. And other people who wanted to get to know how to build a turf farm.

There are now courses and lectures on traditional turf building techniques and sustainable living held at Íslenski bærinn in co-operation with the University of Iceland and the Icelandic Art Academy. Hannes has now taught hundreds of people how to build a turf farm. 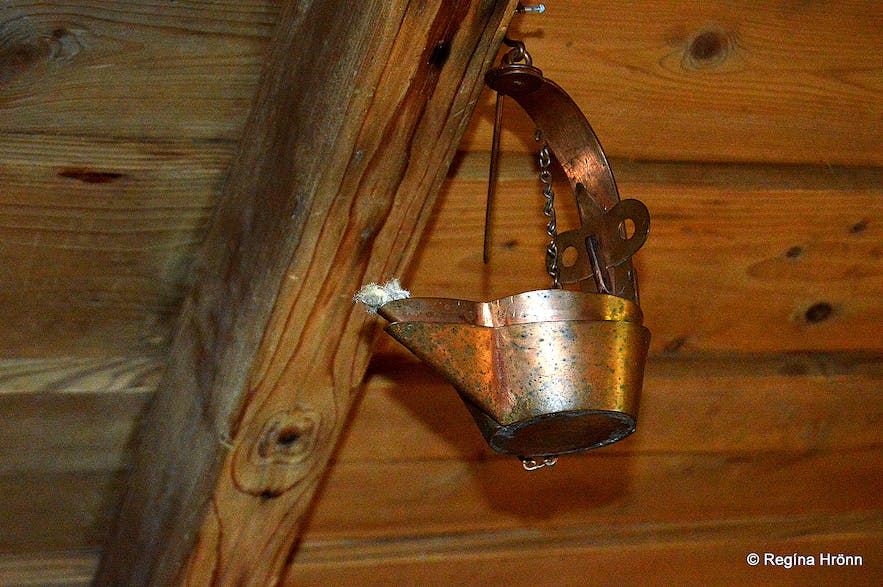 Hannes, who is born in 1955, grew up on his family's turf farm until the age of 9. I have always thought it to be remarkable that my grandmother (born in 1923) had memories of growing up on a turf farm in the Westfjords of Iceland. Hannes must be one of the youngest individuals with memories of living in a turf house.

Together with his mother Ásdís, who also had a passion for rebuilding and preserving the turf farm, and his wife, Kristín, Hannes has done an excellent job. 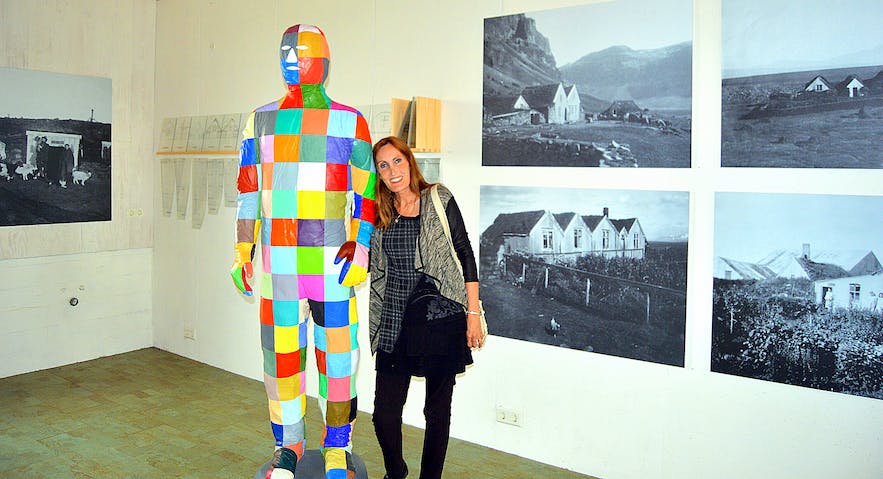 At the newly constructed sustainable museum building, there is also a great photo-exhibition on old turf houses, which is not to be missed. Here you can learn all about this old architectural heritage.

A whole wall is covered with a photo collection of old photos of the Icelandic turf houses, most of which have disappeared.

Also, notice the floor of the museum - it is recycled from marble tabletops, which were to be thrown out - and now create this most beautiful mosaic floor. 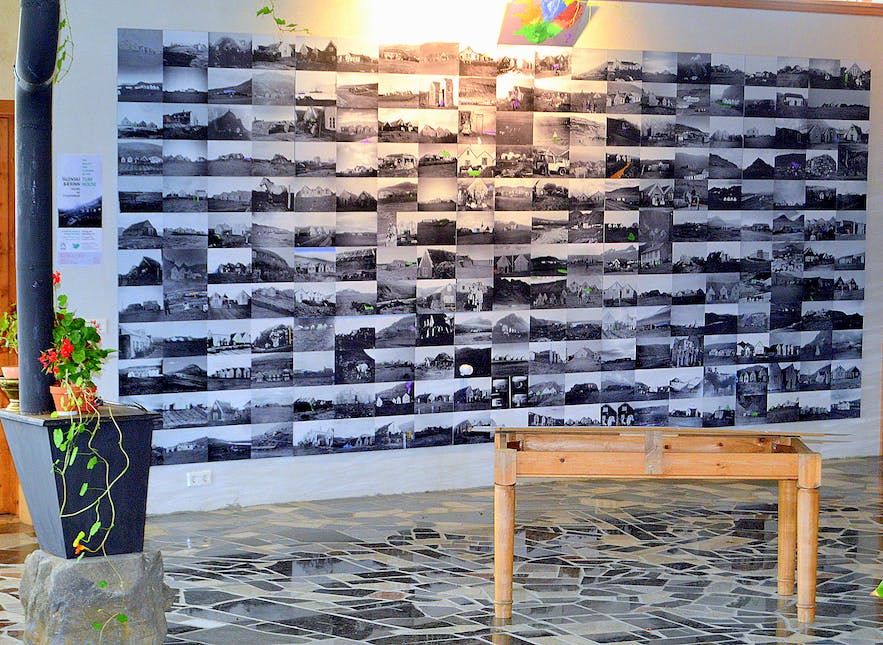 I spent way too much time looking in awe at all these old photos of long-lost turf houses. It made me think of the old days when the major part of the Icelandic nation lived in turf houses, both rich and poor. And how this architectural heritage is disappearing.

I am very grateful to the visionaries who understood how important it was to preserve this architectural and national heritage.

The photo below, which is one of the photos at the exhibition, shows what Núpsstaður turf farm looked like in 1918. Notice also the cute little turf church to the right of the turf farm :) You can see in my travel-blog on Núpsstaður what it looks like now.

Mainly the turf houses and turf churches left in Iceland have been preserved and maintained by Þjóðminjasafn Íslands - the National Museum of Iceland, but there are a few entrepreneurs like Hannes, who have maintained other turf houses or built new turf houses.

Hannes's efforts in preserving this old turf farm should be applauded as we don't want this part of our historical heritage to disappear. When Icelanders moved from the turf houses into more modern houses the turf houses were unfortunately frowned upon.

You can see Hannes in the photo below. In the background is the beautiful sustainable building housing the photo-exhibition. 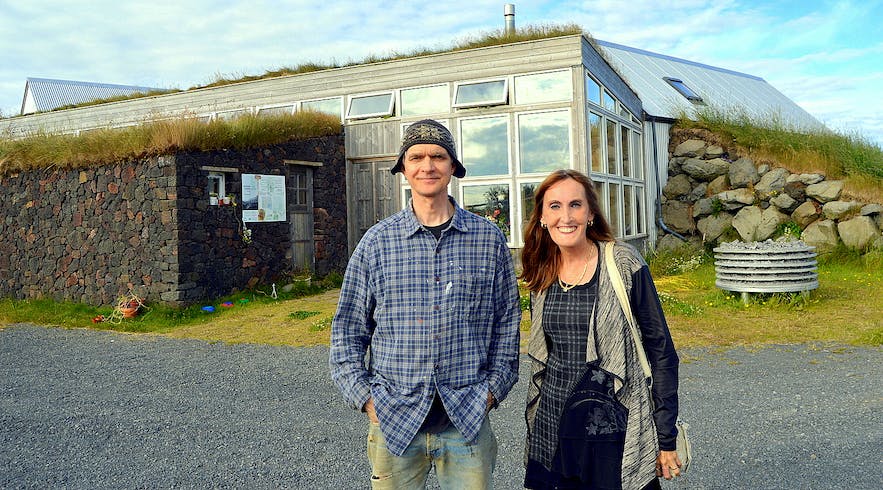 Opening hours of Íslenski bærinn are Sundays from 13:00-18:00. Open for groups of 5+ all the other days of the week, if you book ahead.

It is well worth the detour popping down to Íslenski torfbærinn in the area Flói in South-Iceland. It is located just 60 km away from Reykjavík city, east of Selfoss town on road 33.

To visit this area you can rent a car in Reykjavík and drive here in an hour or so. This area of Iceland is beautiful and we often drive there from Reykjavík on a day tour. 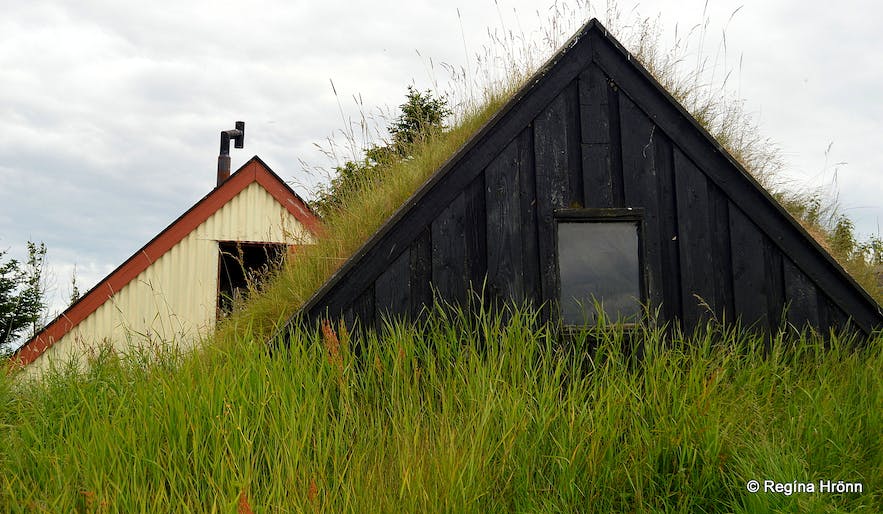 I would recommend driving further south road 33 and visit the museum village of Stokkseyri.

There you will find the Icelandic Wonders Museum, where you can experience elves and ghosts up close and personal, and the interesting Wildlife Museum, with its myriad of animals and a very knowledgeable proprietor. 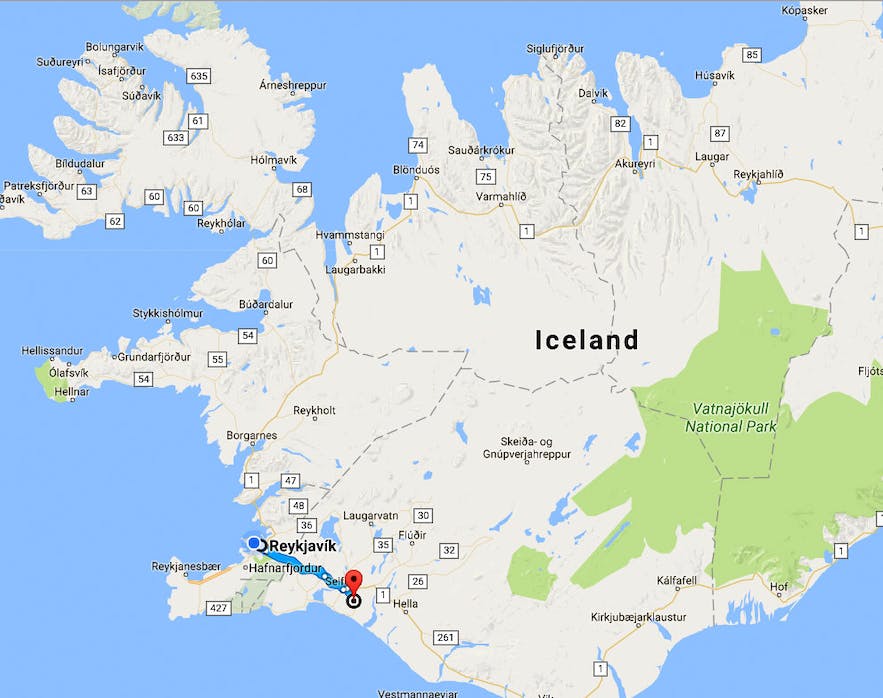 I have written about all of the remaining turf houses in Iceland in other travel-blogs, seeing that they are very dear to me: