The best-known waterfall in Grundarfjörður is Kirkjufellsfoss waterfall with the backdrop of the prominent mountain Kirkjufell, the most photographed mountain on the Snæfellsnes peninsula.

But you will find 2 other lovely waterfalls close to Kverná in the outskirt of Grundarfjörður town;  Kvernárfoss waterfall and Grundarfoss waterfall. I know that most people drive by these waterfalls, but I include them in my visit.

Kvernárfoss waterfall & the concert hall of the elves 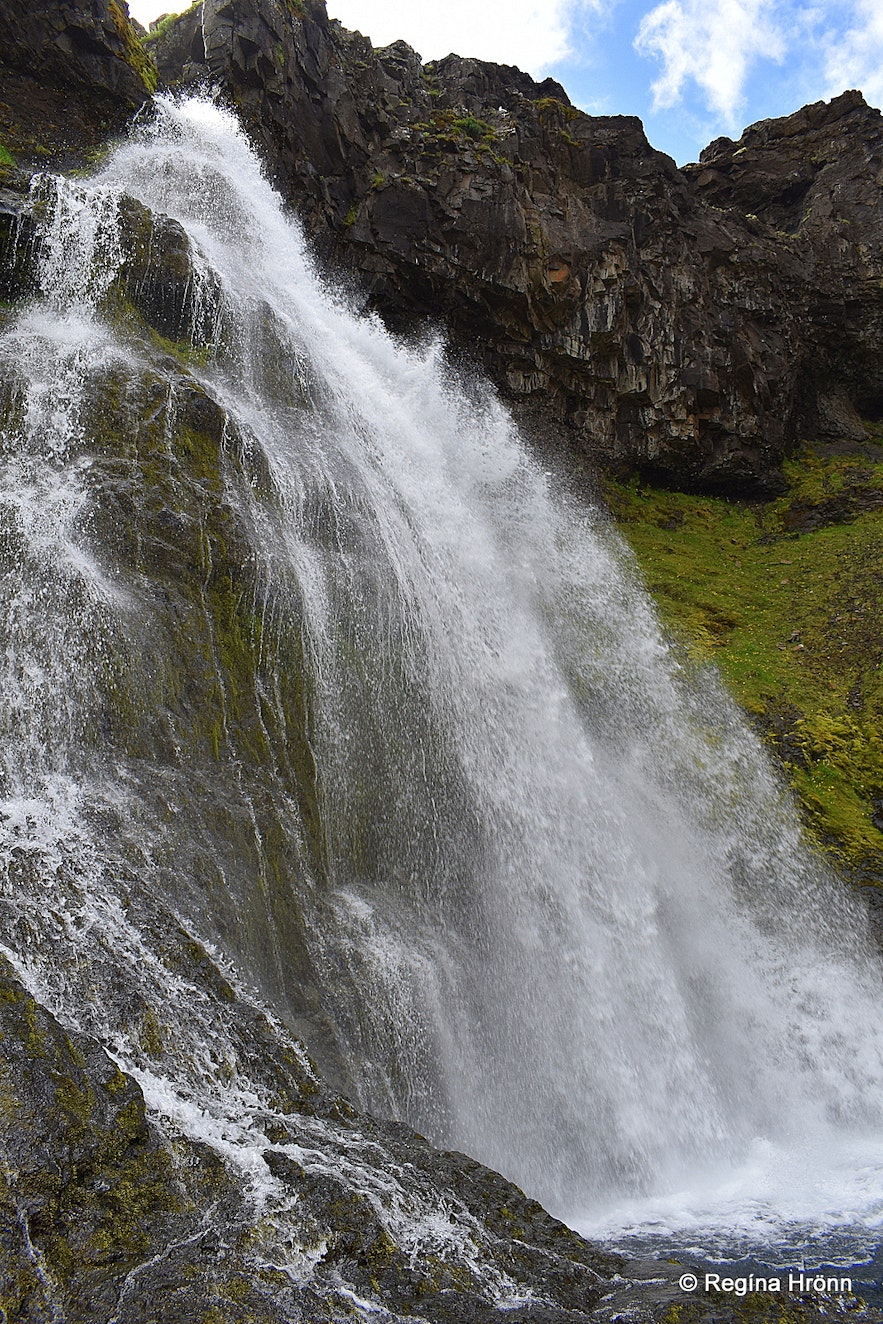 I have visited it twice as I got permission from my relatives, Kristinn and Ragnar, who live at Kverná farm to cross their land. Access through their land is not permitted though and the gorge has to be protected from traffic.

But you can drive up the road marked "Tengivirki" on the other side of the river and have a look at the waterfall from the top of the gorge. 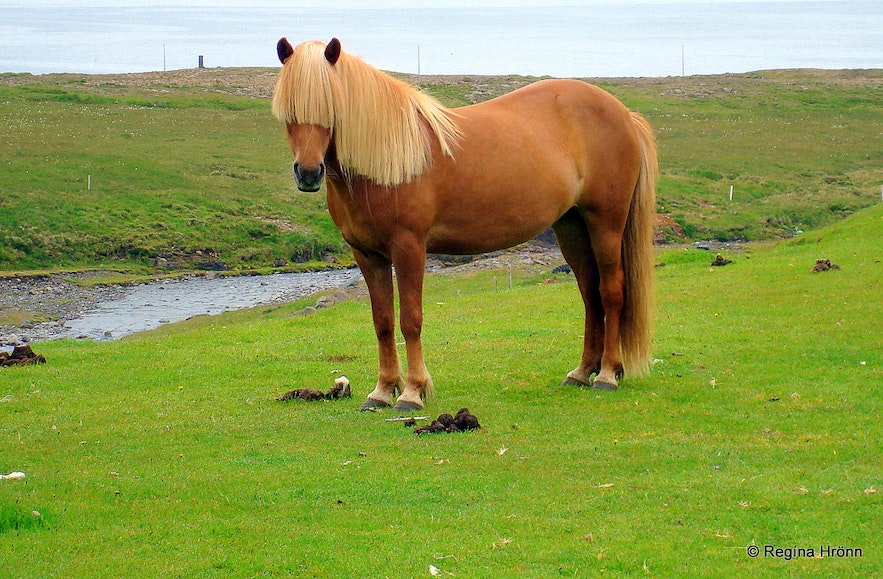 One of Ragnar's horses

Ragnar takes people on a guided tour and offers horseback riding and lodging. You can check them out at Kverná Horse Rental. Here is a couple of the tours they offer. 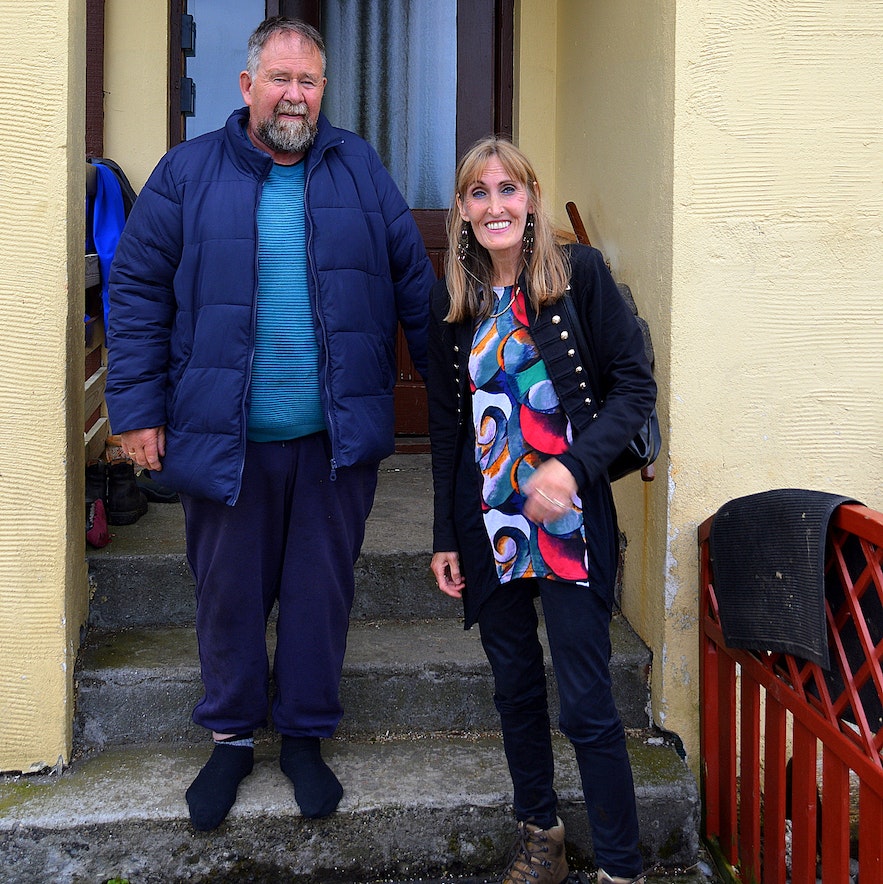 Visiting my relative Ragnar at Kverná :) I am looking very worn out after travelling for 17 days around Iceland and hiking every day

Ragnar also offers lodging, rooms with access to a kitchen. I had a look at the rooms when Ragnar invited me in for some coffee and homemade cakes.

You can look them up on the Facebook page Skjólsteinar. 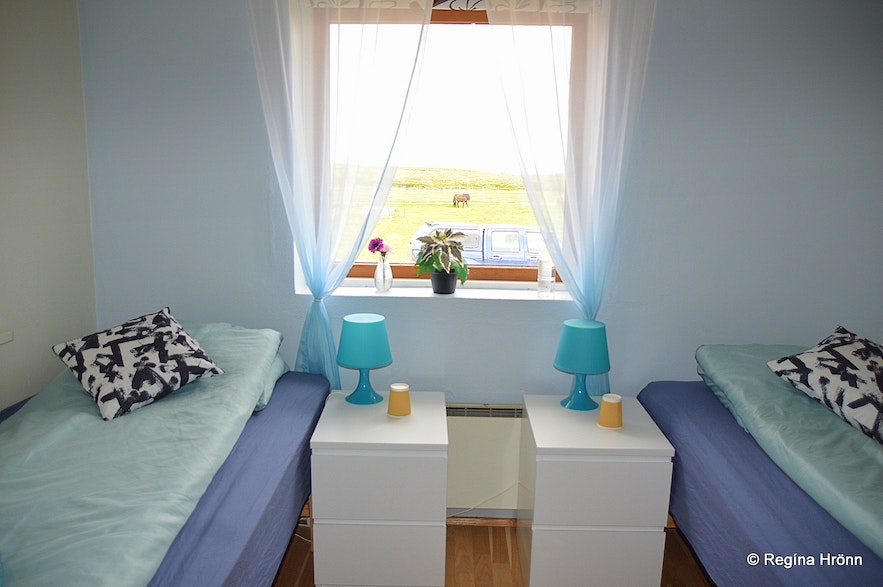 One of the rooms at Kverná farm

Steinunn, Kristinn's, and Ragnar's sister, told me that a medium had mentioned a big elf population in the gorge by Kvernárfoss waterfall. And when Steinunn was a child she and some other children meant to push a big rock into the gorge. They then heard somebody shouting: "Mamma"! meaning mother.

The children got so startled that they ran as fast as they could back to the farm. Maybe this was an elf-child, who was warning his mother about the oncoming danger of a falling rock. 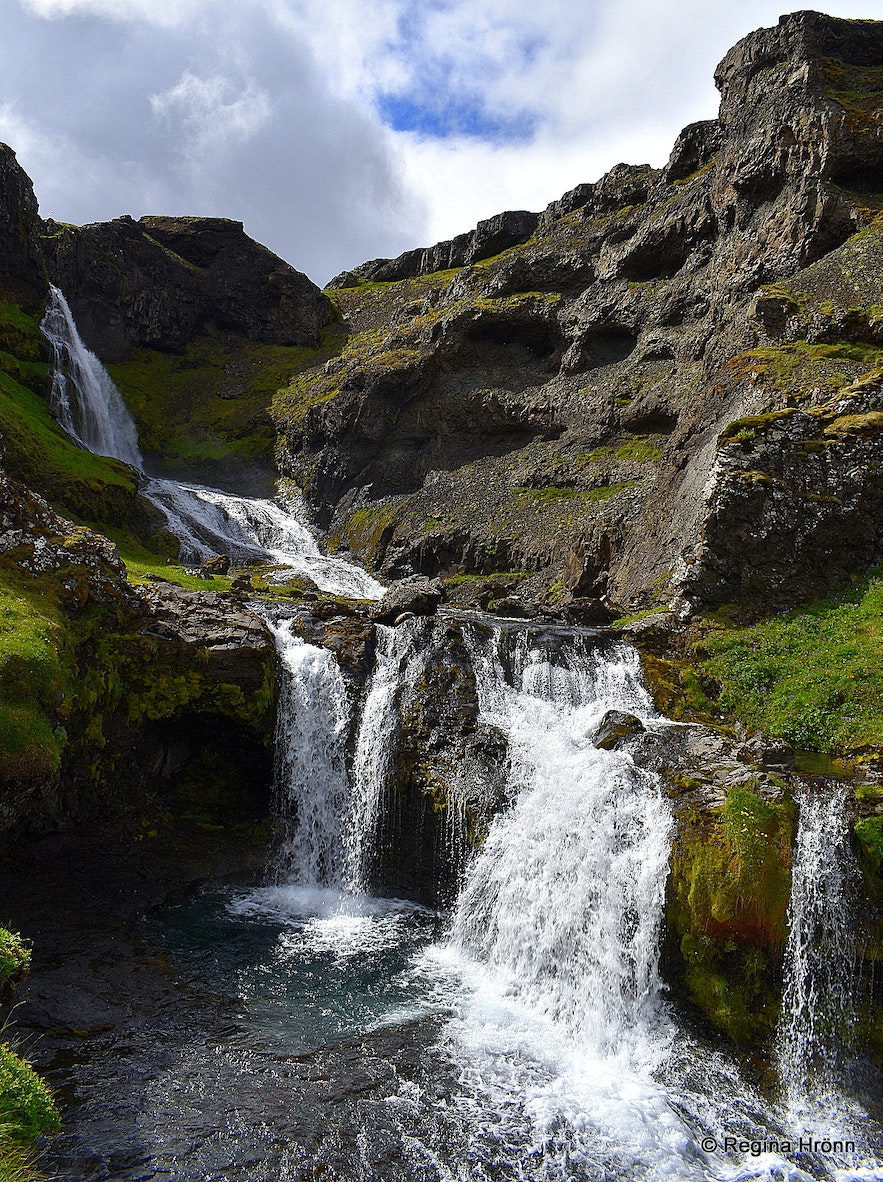 According to Kristinn then you will find one of the most spectacular concert halls of the elves in Iceland in Kvernárgljúfur gorge! The singing hall is located in the cliffs by Kvernárfoss waterfall.

I found this description from the medium Margrét at Öxnafell in one of Árni Óla's books called Hulduheimar or The Hidden Worlds. Margrét has seen elves and hidden people in many places in Iceland.

Árni Óla writes this in his book: "Margrét has seen the hidden people and their habitation in several places on the peninsula (Snæfellsnes peninsula) and she said that it was especially memorable visiting Kvernárgljúfur gorge in Grundarfjörður. In the gorge, she saw a large learning centre, beautifully built and perfect, in her opinion. 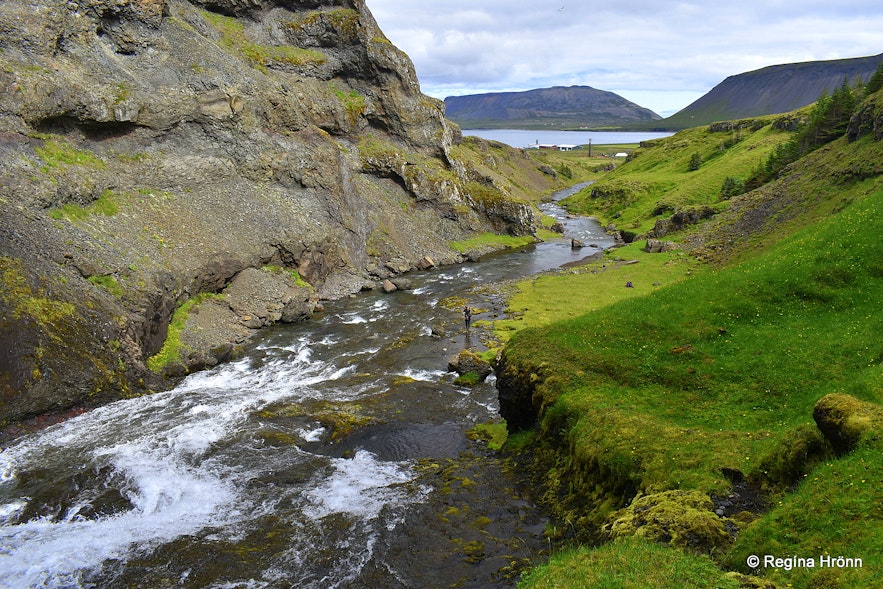 She saw a large concert hall in the gorge, a library, an art gallery, etc. She especially noticed how everybody was happy and content, how everything was clean and elegant, and everything was beautifully arranged in an organized way.

She saw both men and women and all the women were wearing long, blue dresses".

(Translated into English from the book Huldufólk by Árni Óla - RHR) 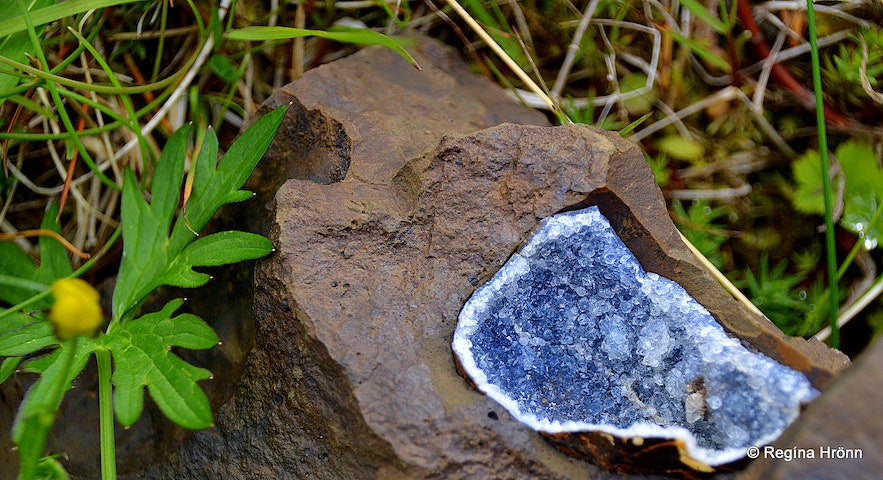 A beautiful rock in the gorge - it was quite small, but I think it looks so beautiful enlarged like this

The only thing I could hear was the sound from the fulmar nesting in the cliffs and flying above my head. And a flock of rock doves flew back and forth. I have never seen doves in gorges in Iceland, so it was quite special. 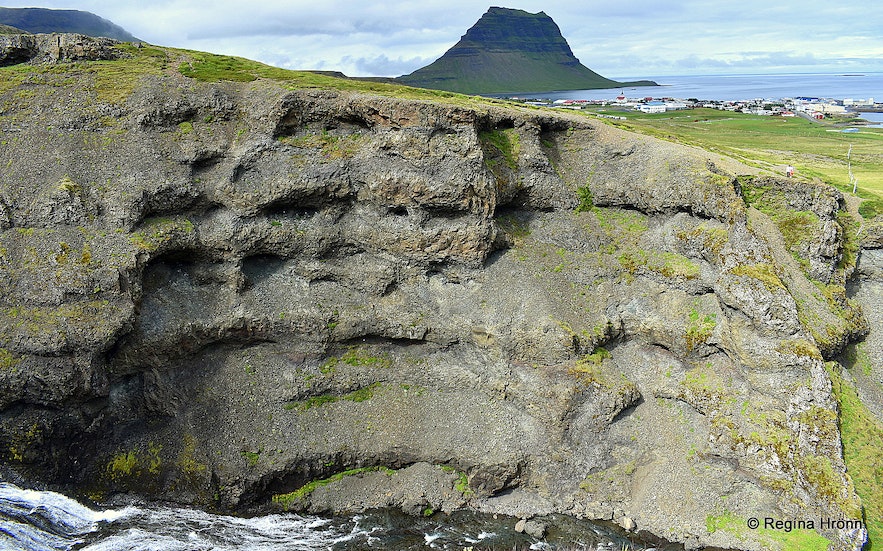 The fulmar nests in holes in the rock

You can see Mt. Kirkjufell and Grundarfjörður town on the other side of the gorge. That side is where you can see the waterfall from.

As I mentioned earlier then you take the road marked "Tengivirki" which means substation, on the other side of the river, and drive up to a grey and turquoise structure. Above it, you can reach the gorge and look into it from above. 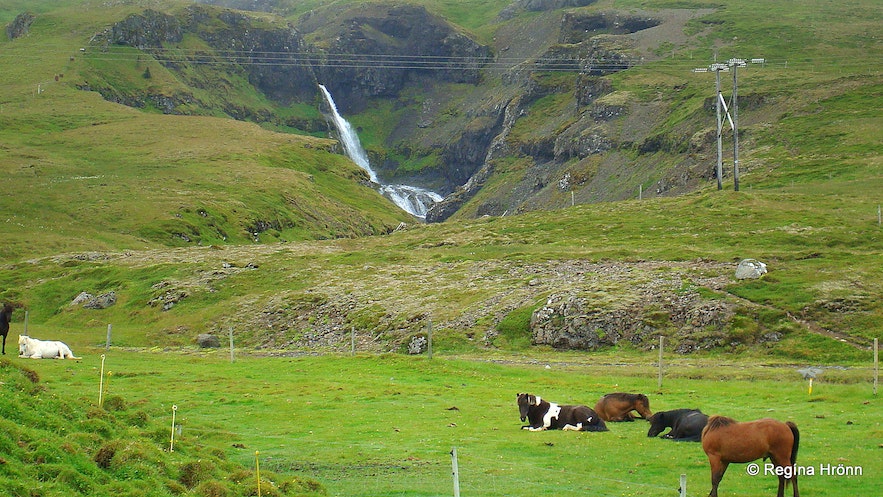 This is such a special place that the gorge must be protected, and that is why it can only be visited from the other side of the river where it is possible to look into the gorge from above.

It pained me to see trash in this beautiful gorge and I picked up an aluminum tray and some other trash that had either been left behind in the gorge or had blown into it.

The hidden people reward loyalty and helpfulness and they also revenge disrespect by their habitation as you can read about in my travel-blog about Pétursey in South-Iceland. On my 3-hour-hike on the land of my relatives at Kverná, I found something which I consider to be a present from the hidden people. I will cherish it forever. 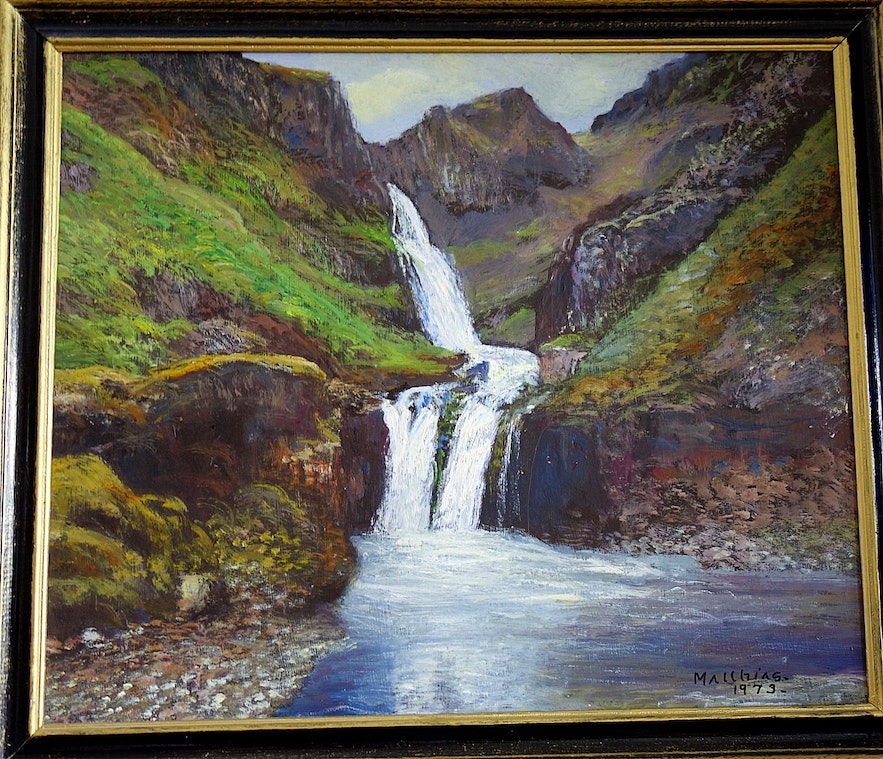 I have got a painting of Kvernárfoss waterfall hanging in my living room. It was given to my grandfather by his sisters on his 70th birthday back in 1973.

One of his sisters, Jarþrúður, was living at Kverná farm and two of her sons live here now, the abovementioned Ragnar and Kristinn.

My grandfather was raised here in Grundarfjörður and we visited his home turf with him when I was little. Later on, I visited it often with my parents, so I have got fond memories and a lot of feelings for this part of the Snæfellsnes peninsula. 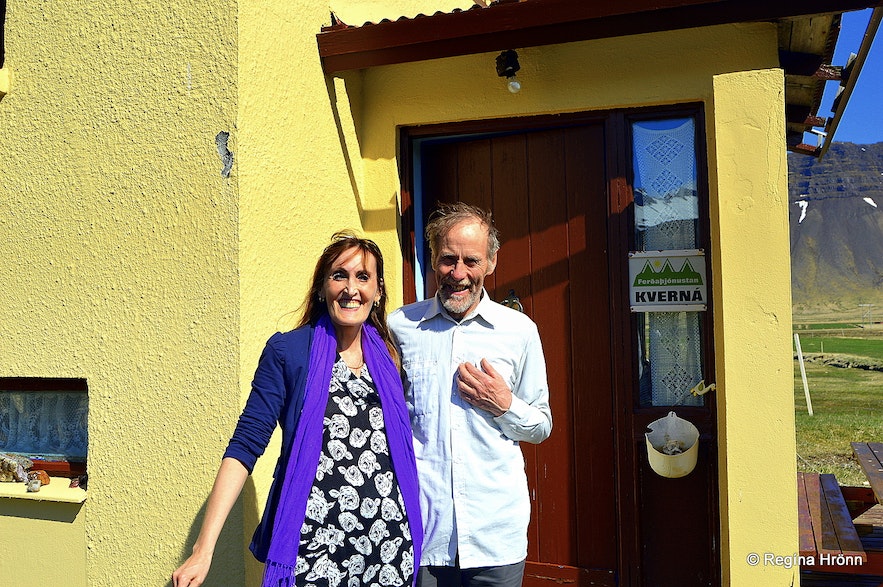 Visting my relative Kristinn at Kverná :)

My grandfather, Kjartan, moved away when he was in his teens, as his father, Ásmundur, drowned in the bay just outside of their home at Bár. It was not easy for his second wife who was left alone with many children plus being pregnant at the time her husband drowned :(

5 men drowned on this day, but my great-uncle, Einar Ásmundsson, was rescued.

Here you will see the location of Kvernárfoss waterfall on the map.

Don't confuse Kvernárfoss with another popular waterfall by a similar name in the south, Kvernufoss waterfall! 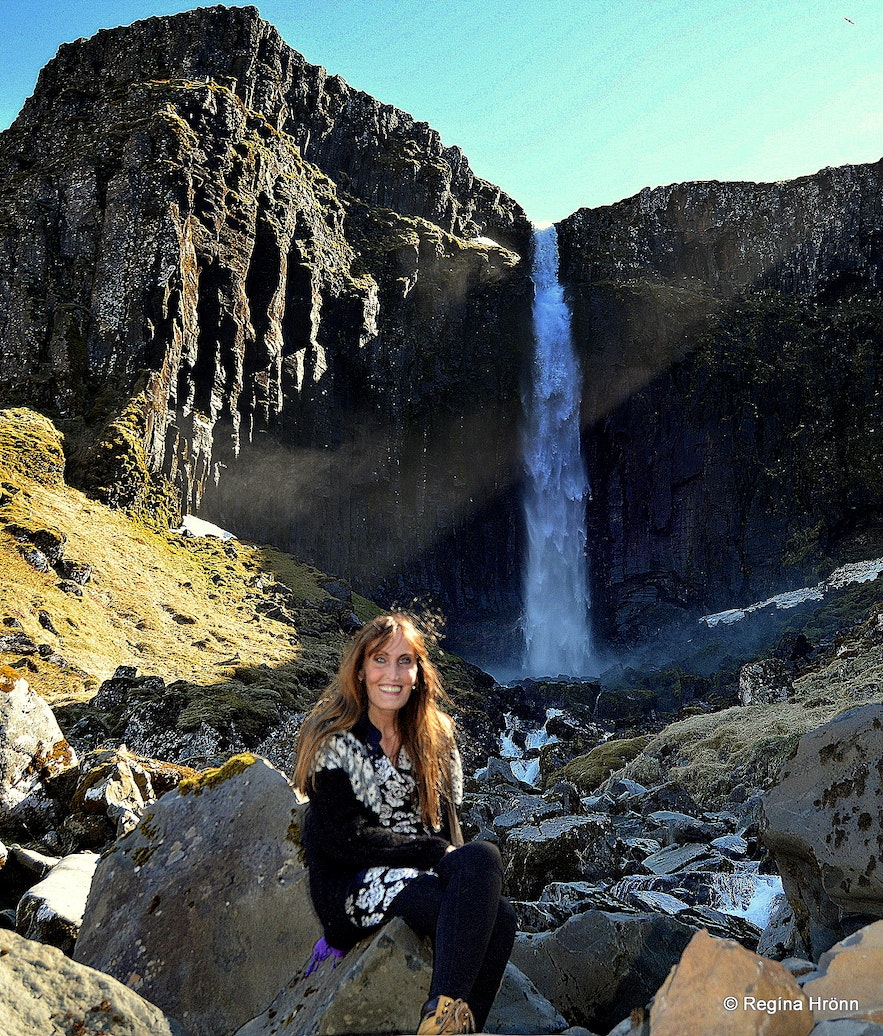 Another beautiful and often overlooked waterfall in Grundarfjörður is Grundarfoss waterfall. There is a 15-minute hike up to this waterfall, a bit rocky closest to the waterfall, but nothing major.

I have often admired this majestic waterfall from afar and sometimes hike up to it if I have enough time while travelling on the Snæfellsnes peninsula.

There is something mystical about Grundarfoss, something about the way it plummets into the gorge - to me, it looks very majestic and it is well worth doing this short hike to be able to stand right next to it. 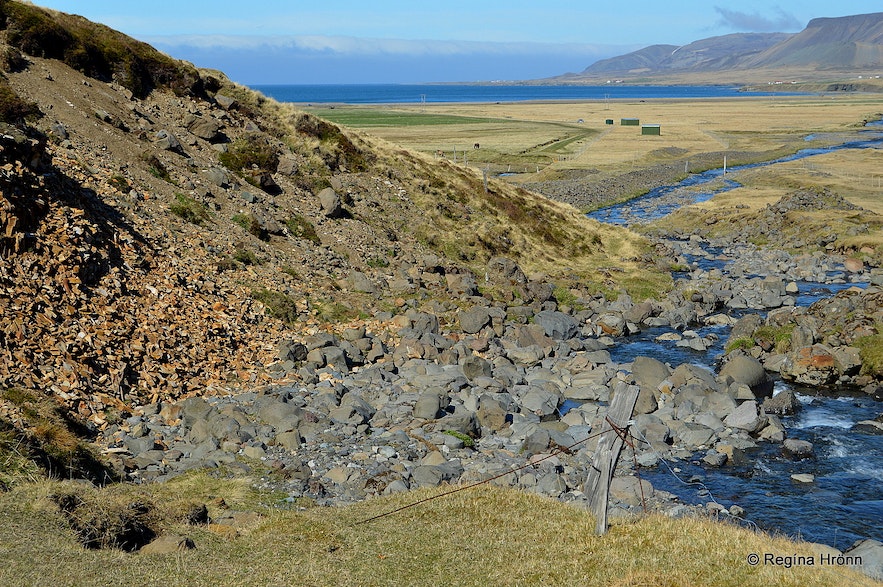 Grundarfoss waterfall is 70 meters high and falls in the river Grundará. To reach Grundarfoss, pass Grundarfjörður town and Kverná farm on road 54 and turn right at the sign Grundarfoss.

There you will have to open and close a gate and drive for a very short distance on a gravel road until you reach a closed-off water supply area. 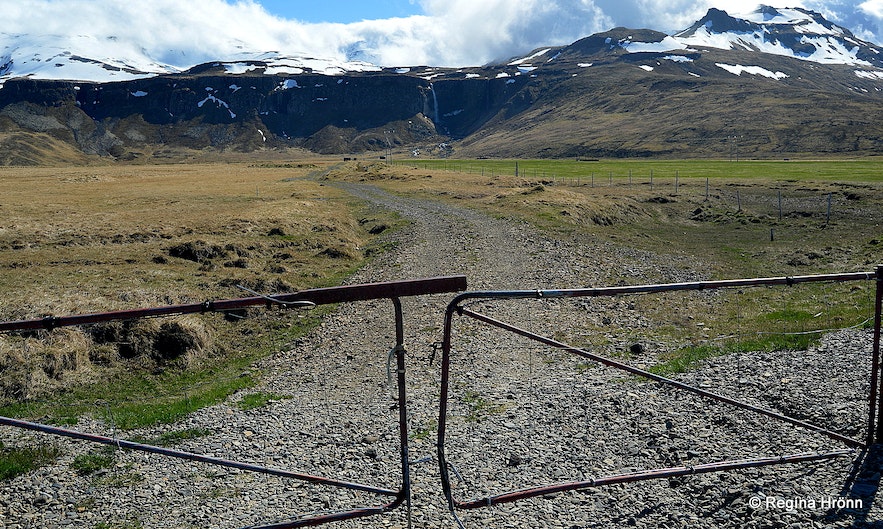 The gate by the track leading to Grundarfoss waterfall

Leave your car next to the closed gate and follow a path on the left side of the water supply area. This path will take you straight up to the waterfall.

On this particular day, the light was not good for taking photos, but you can see that it is a beautiful waterfall. 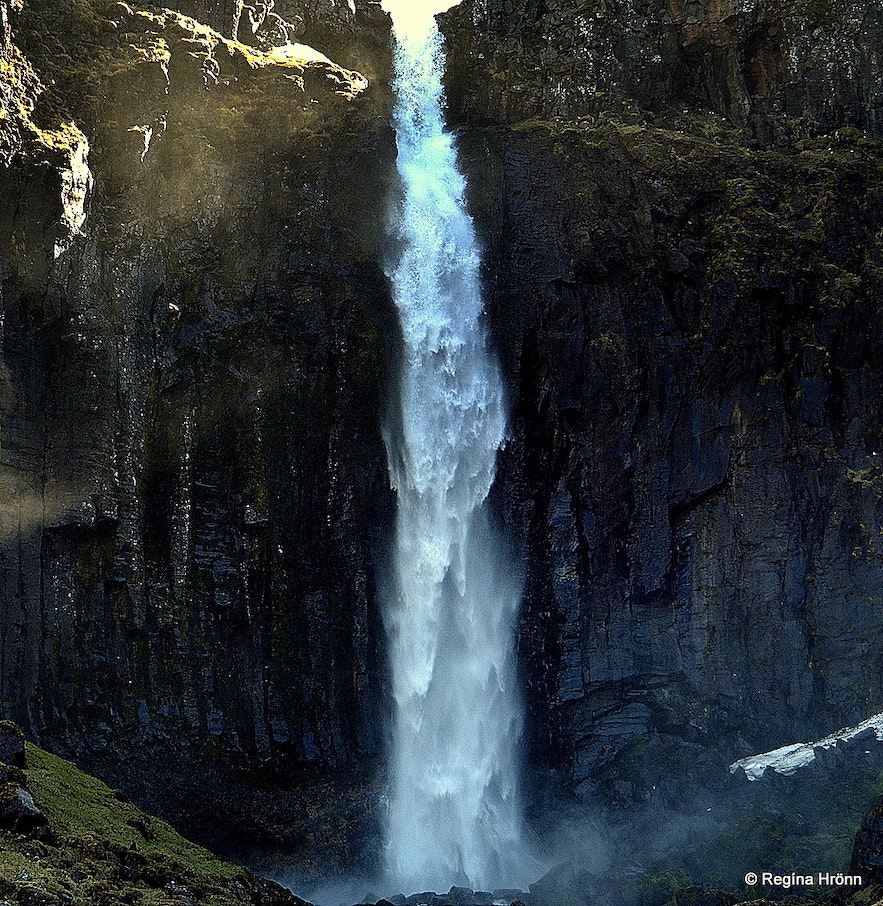 Often you can see this very mysterious waterfall from road 54 flooded in orange light - that is when I think it is the most beautiful.

You can either rent a car in Reykjavík and drive to the peninsula yourself.

Here you will see the location of Grundarfoss waterfall on the map.

I have written a series of travel-blogs on Snæfellsnes as there is just so much history and places of interest everywhere you look. The travel-blog is in chronological order and might be of help when you travel around the Snæfellsnes peninsula: