At Skinnastaður in NE-Iceland, you will find a beautiful church, called Skinnastaðarkirkja church. It was built in 1854 and is a true gem - just wait until you see how colourful it is on the inside.

This church is located very close to some of Iceland's pearls of nature, Ásbyrgi nature reserve, and Jökulsárgljúfur canyon, which are my favourite locations in Iceland.

Icelandic folklore tells us about strange things happening in this church. 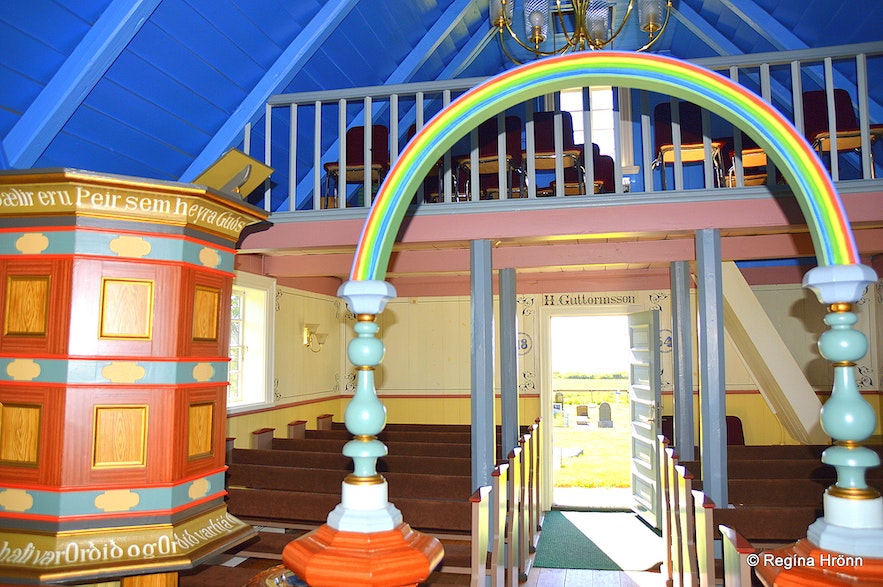 My great-great-grandfather, Benedikt Kristjánsson (1840-1915), served as a minister at Skinnastaður from 1870-1873 and here 2 of his first children were born.

I am named after his first wife, my great-great-grandmother Regína Magdalena Sívertsen, who had joined Benedikt here from far away, from Keflavík in SW-Iceland. 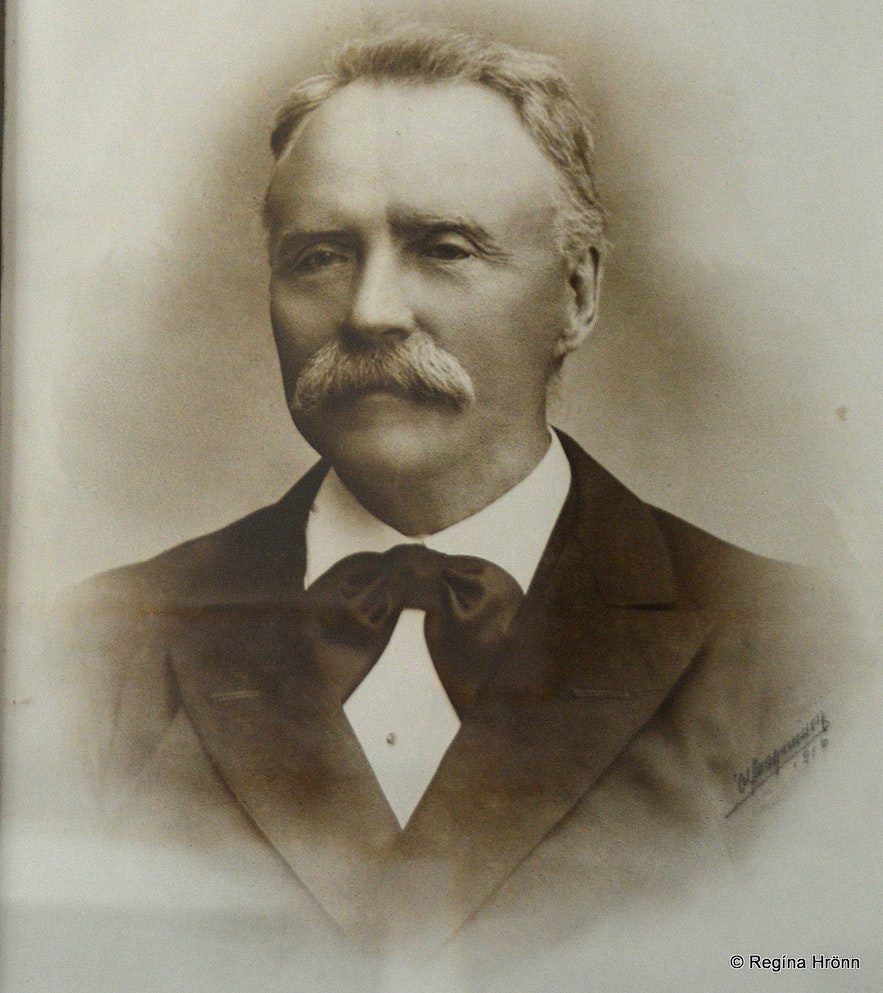 I have told you about my great-great-grandparents in my Grenjaðarstaður travel-blog, where later Benedikt served for 30 years.

Rev. Benedikt liked staying at Skinnastaður, but this parish was difficult, especially as he also served Garðskirkja church on the other side of the massive unbridged glacial river Jökulsá á Fjöllum, which runs through Jökulsárgljúfur canyon.

So in 1873 he moved and served as a minister at Helgastaðir in Suður-Þingaeyjarsýsla.

And 3 years later he was appointed to the parish at Grenjaðarstaður manor, where he served for 30 years.

Grenjaðarstaður turf house is now a museum and one of the most beautiful turf houses left in Iceland. 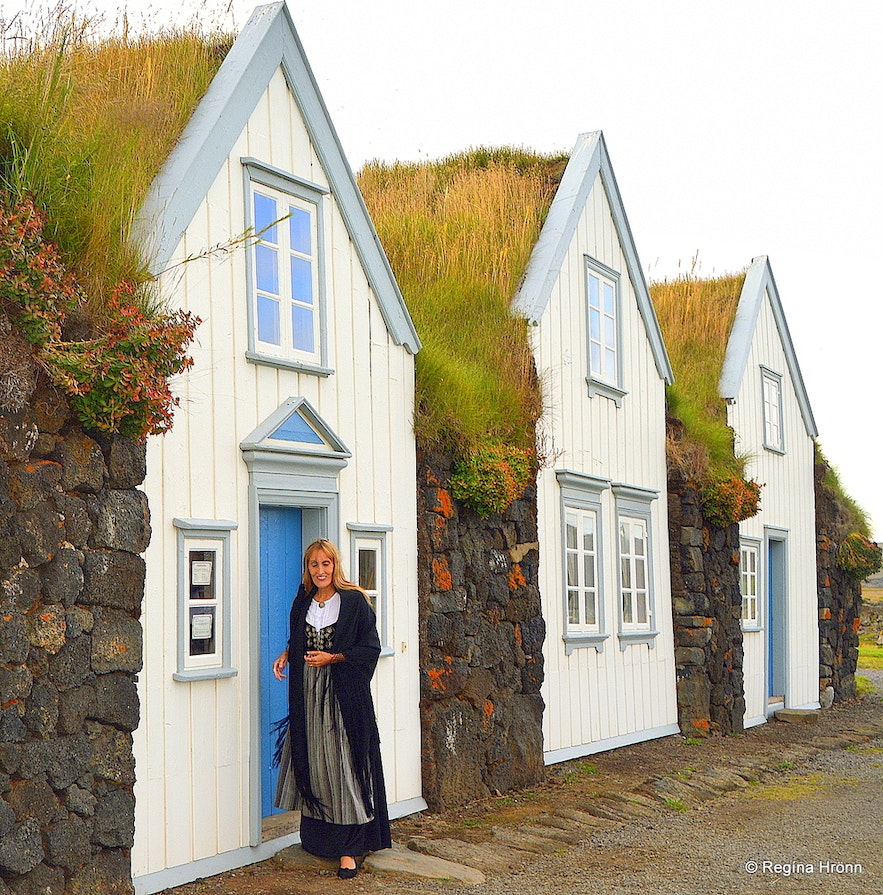 Grenjaðarstaður turf house, the former home of my ancestors

I have written a long travel-blog about turf houses if you want to see how Icelanders lived in the olden times:

A List of the beautiful Icelandic Turf Houses, which I have visited on my Travels in Iceland.

In 1907 Benedikt moved to Húsavík in North Iceland with his second wife Ásta, and his son, Bjarni, my great-grandfather, and in the house to the right in my photo below, my grandmother, Kristín, and her 14 siblings were born.

My ancestors built 2 beautiful houses in Húsavík which you can see in my travel-blog: the lovely Húsavík - the Whale Watching Capital of Iceland.

These houses were built in 1907, the same year as the Húsavíkurkirkja church, the landmark of Húsavík. That church I consider to be the most beautiful church in Iceland. 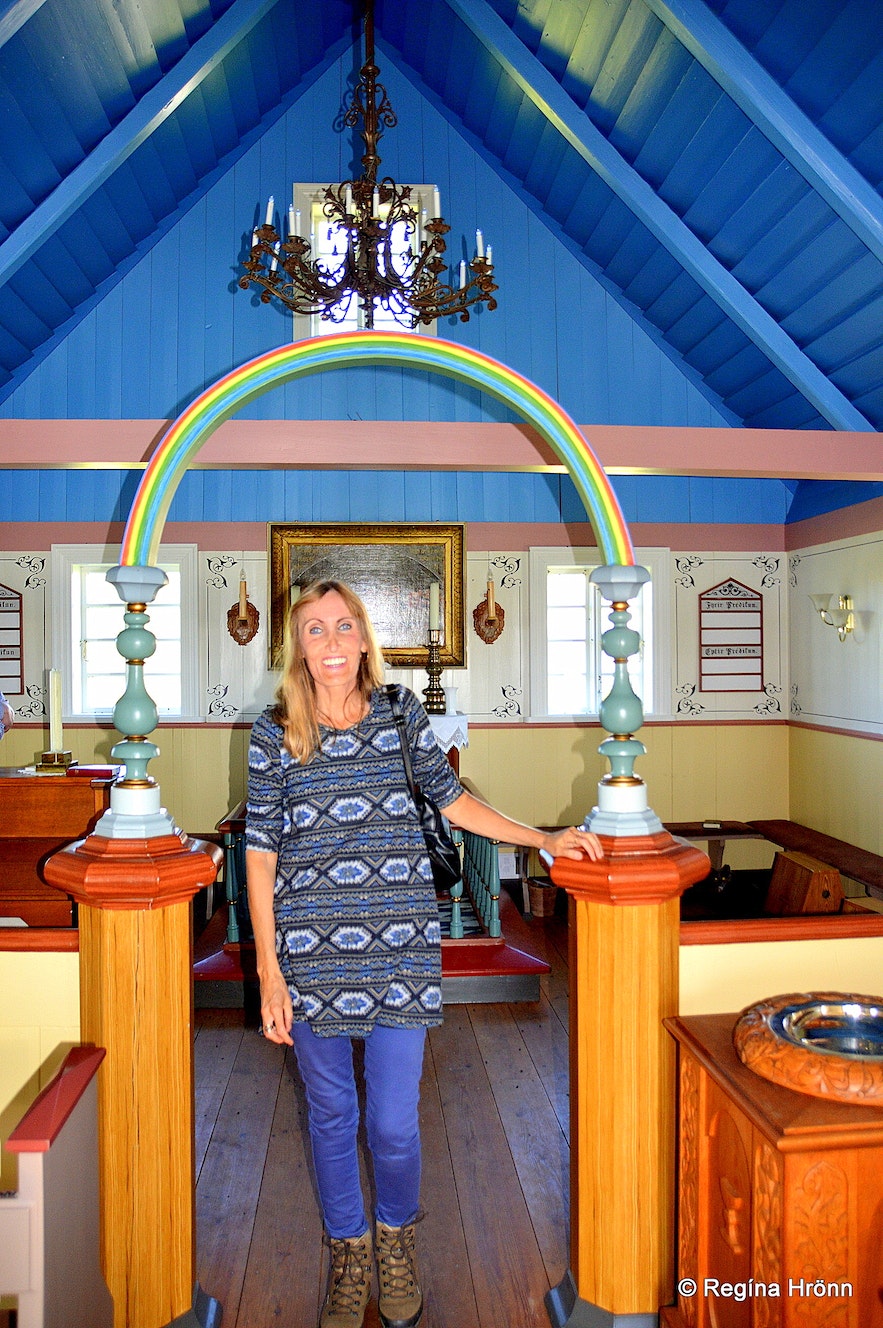 I love the rainbow and beautiful colours in Skinnastaðarkirkja church

I visit all the churches I can reach on my travels in Iceland.

They are, unfortunately, locked as there have been cases of vandalism and theft in the churches.

People have slept in the churches and even cooked with a primus inside delicate old timber churches! 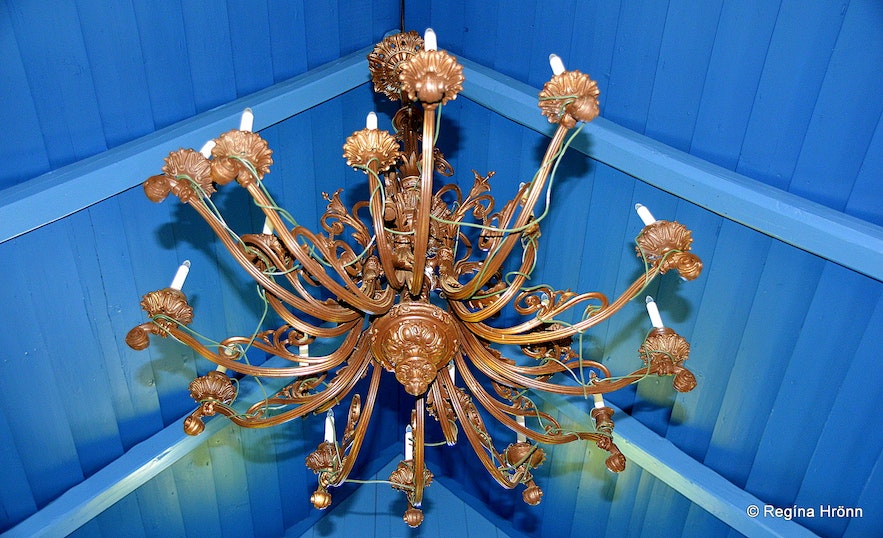 So we are on an endless search for the church keys and are always disturbing the farmers or the ministers.

Minister Jón Ármann Gíslason at Skinnastaður was kind enough to open the church for us and show us around.

There are 2 ministers living at Skinnastaður, Rev. Jón, and his wife Rev. Hildur Sigurðardóttir. 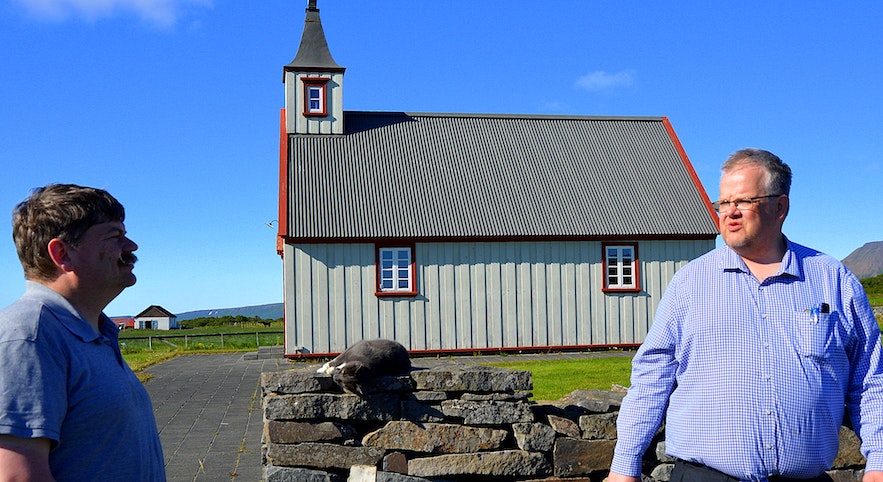 My Jón and Hildur's Jón

Old Icelandic folklore is related to this church. The name of the folklore is simply "Skinnastaðakirkja".

The name of the church is Skinnastaðarkirkja with an "r", but the folklore omits the "r" and calls it Skinnastaðakirkja. The "r" shows the difference between the singular and the plural form of the place name. The name seems to have changed from plural to singular.

The church and the folklore 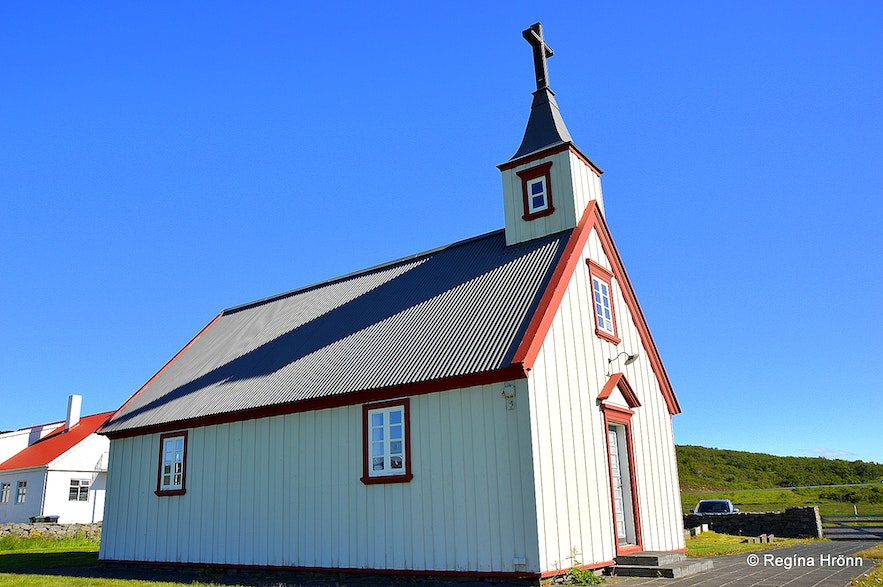 Skinnastaðarkirkja church and the parsonage

I translated this folklore into English as I think that folklore, elf locations, troll stories and stories of the hidden beings of Iceland add value to the locations in question and thus enrich our travels in Iceland.

I found this folklore in Þjóðsögur Jóns Árnasonar - the Collection of Folklore by Jón Árnason - Volume IV, page 52:

"According to the accounts of old men, a long time ago there was a minister at Skinnastaðir in Axarfjörður fjord. The minister was unscrupulous and did not reprimand his congregation for behaving badly.

His old mother lived with him 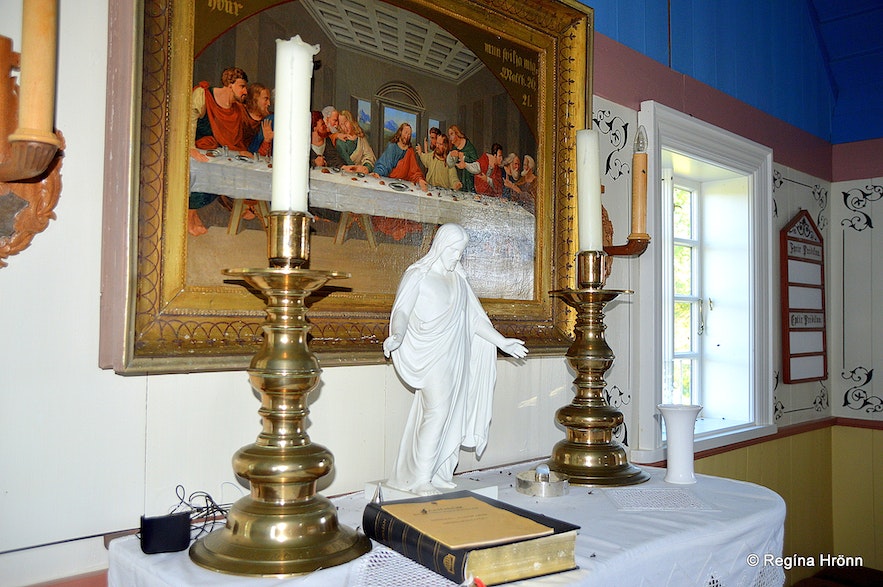 The copper altar candlesticks date back to 1694.

One Christmas Night the minister was to perform the evening prayer according to the tradition.

Many people had gathered in the church with the minister.

But instead of the mass ritual, the minister and his audience started performing all kinds of impiety. There was rumpus and dancing, games and playing of cards, promiscuity, and all kinds of evil activity. 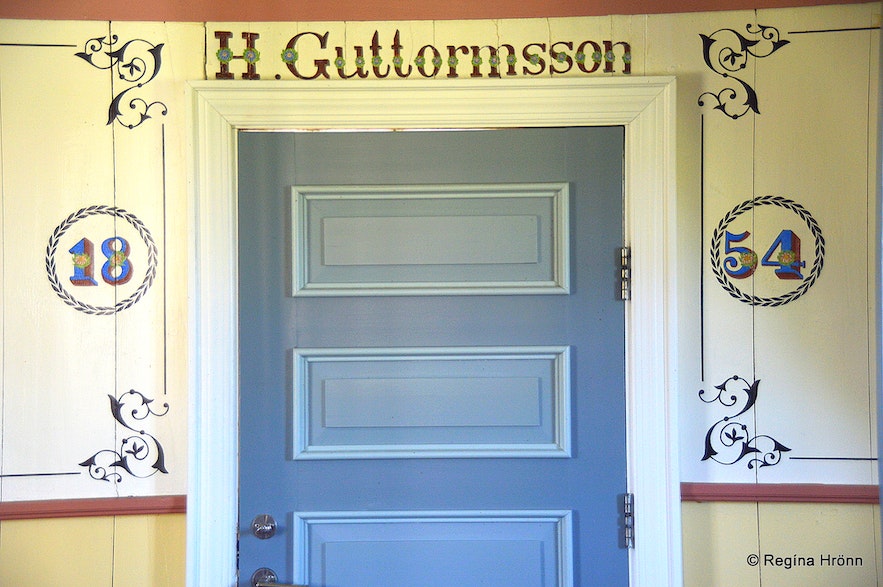 The mother of the minister went to the church and as she saw the conduct of her son and the congregation, she was startled.

She approached the minister and reprimanded him for his evil doings, and told him to tend to his duties. 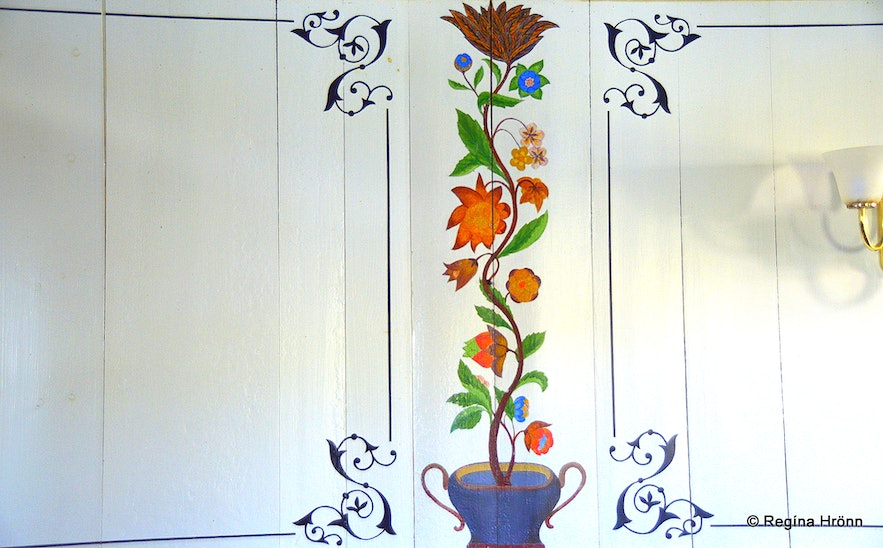 Decorative paintings from 1865 by Arngrímur Gíslason

But the minister carried on with what he was doing. The old woman repeated her reprimand three times, but he paid no attention to her.

The old woman then left the church and sat down on the wall surrounding the church (in the olden days the Icelandic churches were turf churches some with a circular turf wall). 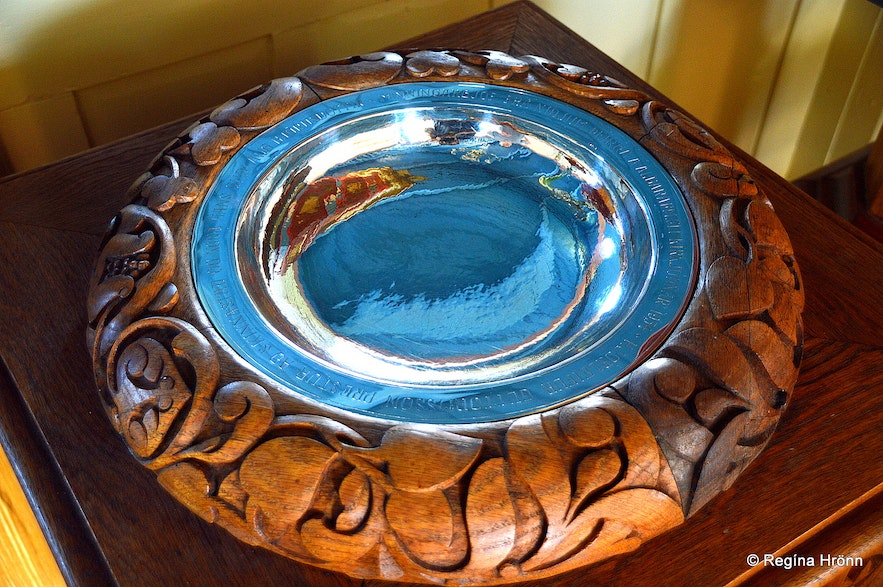 As she had sat outside for a while listening to the racket in the church, she noticed that the church started sinking - and it sank quickly.

The old woman heard the mirth and merriment until the church reached Hell. 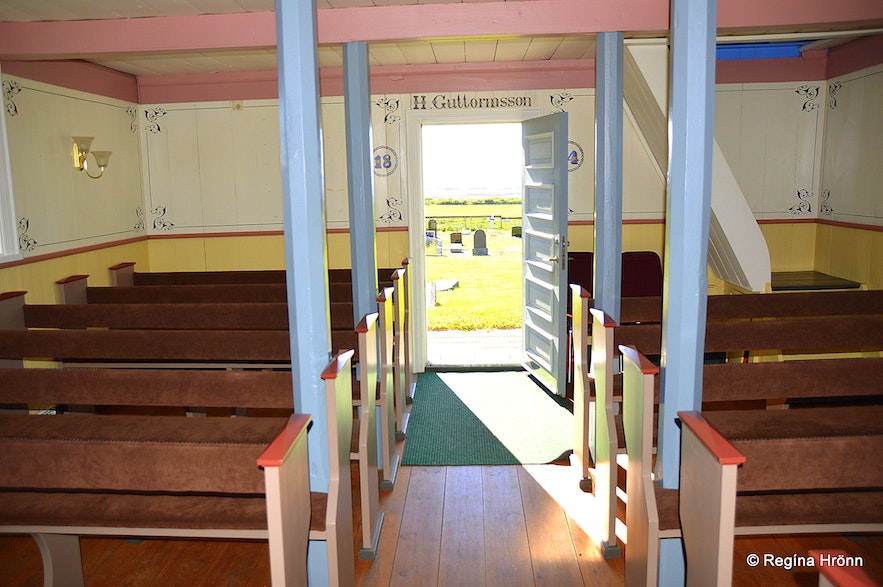 Some people say that when the old woman left the church she had gone to the field and that the whole farm had sunk, but that is unlikely.

The story goes that for the longest time nobody had dared live here as the place was believed to be jinxed and haunted. 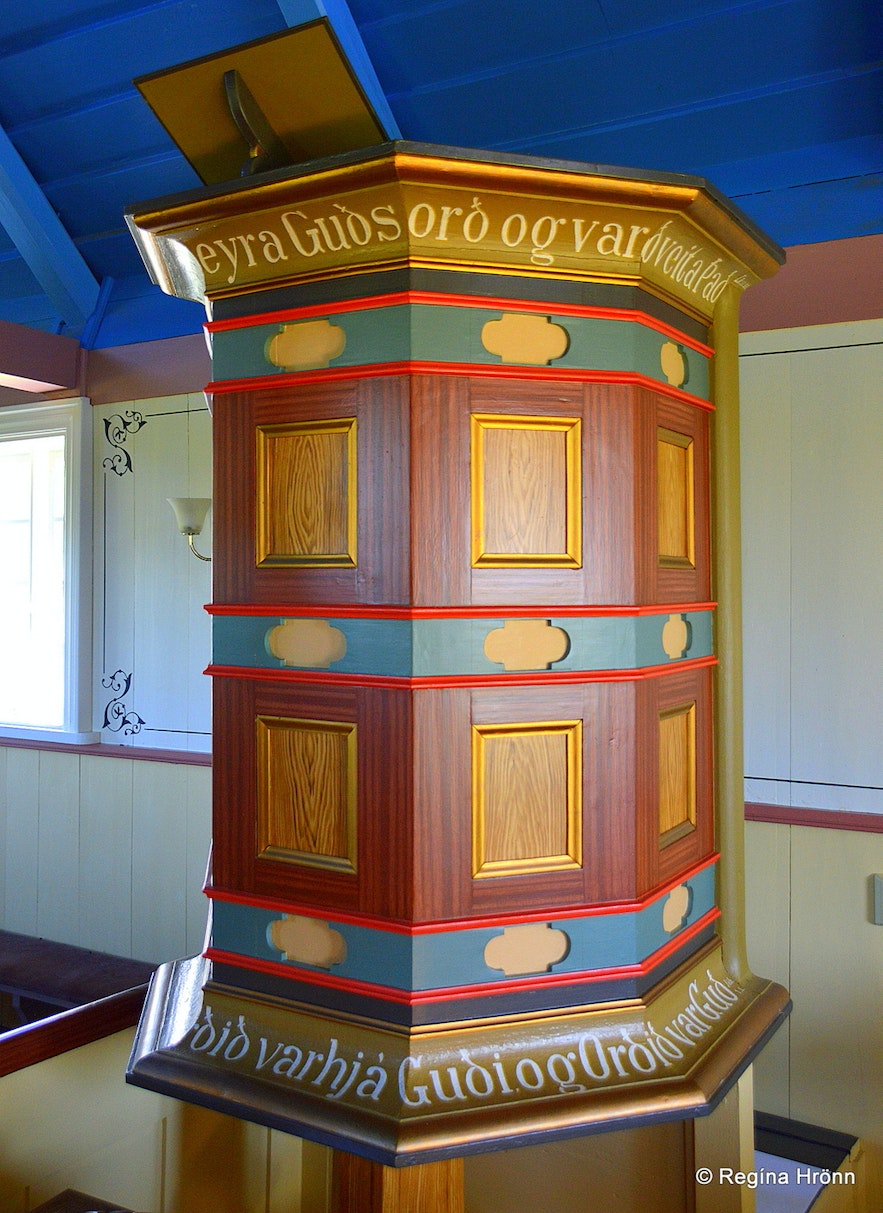 A new church was not built until light started shining on the spot where the church is now located.

After the light was seen a new church was built and the place was called Skinastaðir - but "skin" in Icelandic means a shine.

At the old church site, where the church sank, there has ever since this incident been a circular depression. 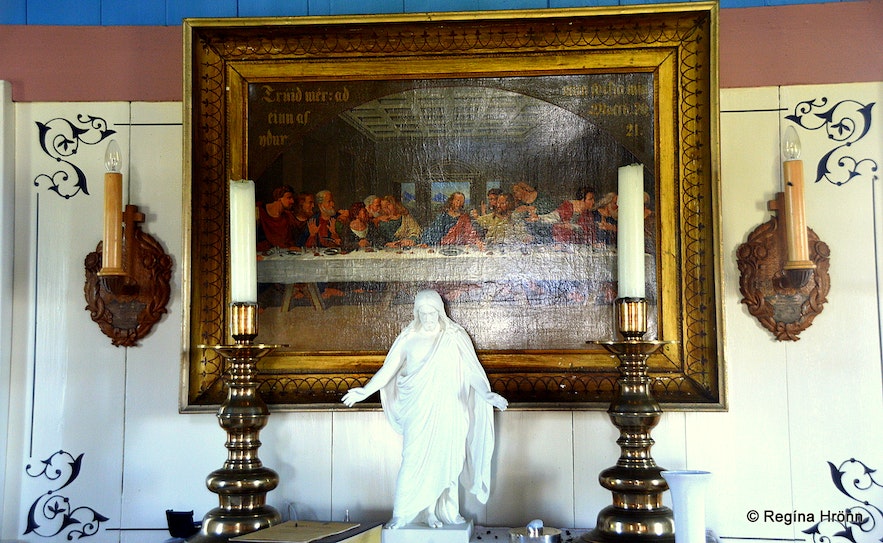 It is now (back when this folklore was written) just outside of the field of Skinastaðir, and on the south side of the depression, you will find the creek Brandslækur.

People who are familiar with this place know of this depression.

The name of the farm is Skinnastaður, but in this folklore, it is Skinastaðir with one "n". And Skinnastaðir as I mentioned earlier.

We don't know when this is supposed to have taken place, but this farm is first mentioned in the Sturlunga Saga, when Bishop Guðmundur góði Arason at Hólar in Hjaltadalur back in 1232 visited Skinnastaðir/Skinnastaður.

I have mentioned Bishop Guðmundur góði - the Good, in many of my travel-blogs, f.ex.:

Hotel Laugarhóll at Strandir - hot Pools and Sorcery in Abundance 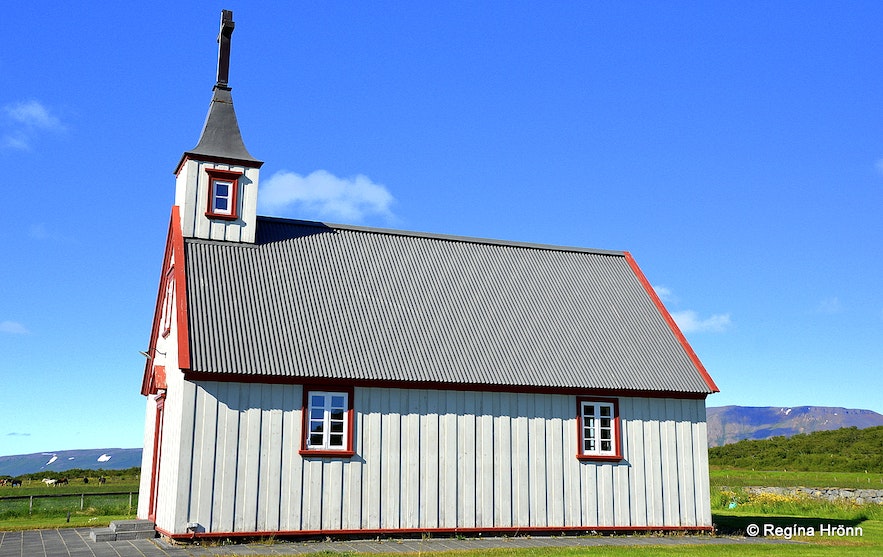 Einar was often called a sorcerer, as he and some of his descendants reputedly practiced sorcery, as is also mentioned in Þjóðsögur Jóns Árnasonar - the Collection of Folklore by Jón Árnason.

This was back in the days of the witch-hunt, so there is nothing to it, but I thought that I should mention it.

There is another similar folklore about Hrunakirkja church upcountry in South Iceland, which I am going to show you in my next travel-blog:

In the vicinity of Skinnarstaður, you will find many of Iceland's pearls of nature as I mentioned earlier. But an interesting detour is visiting the Melrakkaslétta plain.

I have written several travel-blogs about the interesting sights in that area:

Have a lovely time in NE-Iceland :)