In the middle of the Ölfusá river in South Iceland, a lone rock with one Christmas tree on top might catch your eye.

Ölfusá river is Iceland's largest river by volume and the water in it at some point created Iceland's best-known waterfall; the majestic Gullfoss in Hvítá glacial river. 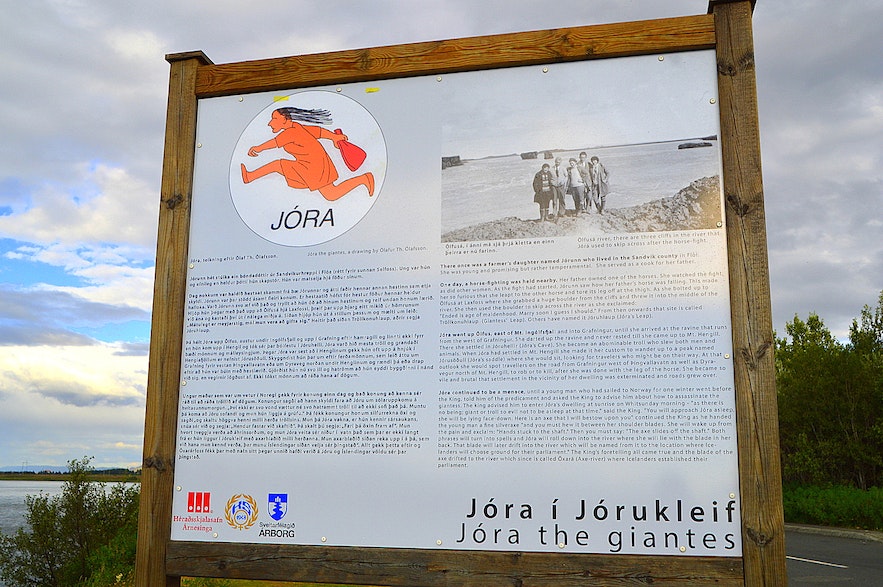 Old folklore in Þjóðsögur Jóns Árnasonar - the Collection of Folklore of Jón Árnason, tells us the story of how this rock came to get its place in the middle of this glacial river. Apparently, a giantess, called Jórunn, threw the rock into the river.

"Jórunn was the name of a girl, she was a farmer's daughter somewhere in Sandvíkurhreppur in Flóinn; she was young and had a lot of potential, but she was considered somewhat temperamental. She worked as a cook for her father.

One day a horse fight took place not far from Jórunn's farm; her father owned one of the horses in the fight, and Jórunn was very fond of that horse. She and other women were present at the horse fight; but as the fight started, she saw that her father's horse was being defeated.

Ölfusá river and the rock

Jórunn was so utterly livid that she stormed towards the other horse and ripped off its thigh; she ran away with it and nobody could stop her, up to Ölfusá river by Laxfoss waterfall, grabbed a huge rock from the cliffs by the river and threw it almost into the middle of the river; she then used the rock to skip across the river and uttered:

"Ended is the age of maidenhood

Marry soon I guess I should." 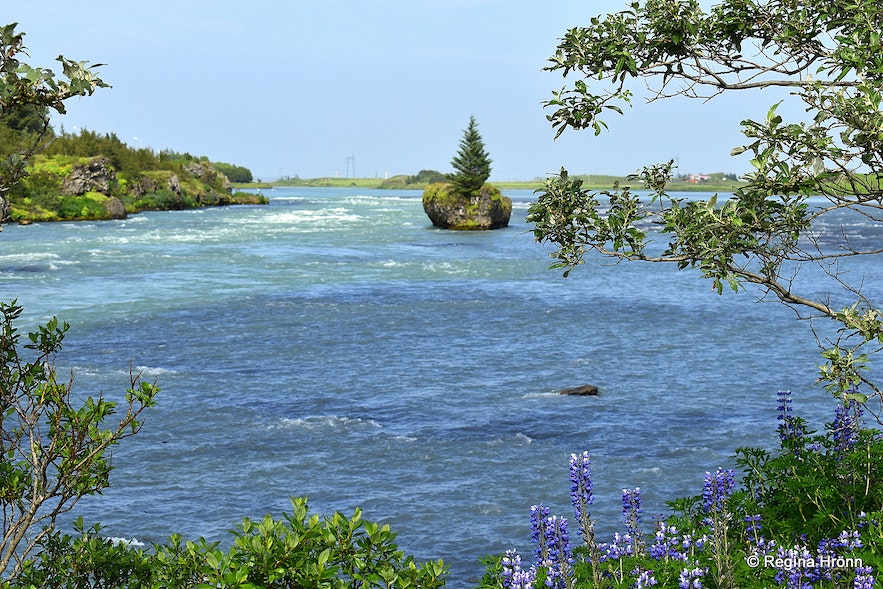 From then on this place has been called Tröllkonhlaup or Jóruhlaup - the Leap of the Giantess or the Leap of Jóra.

There she settled down in what was from then on called Jóruhellir - the Cave of Jórunn - and became a terrible troll and killed both men and animals." 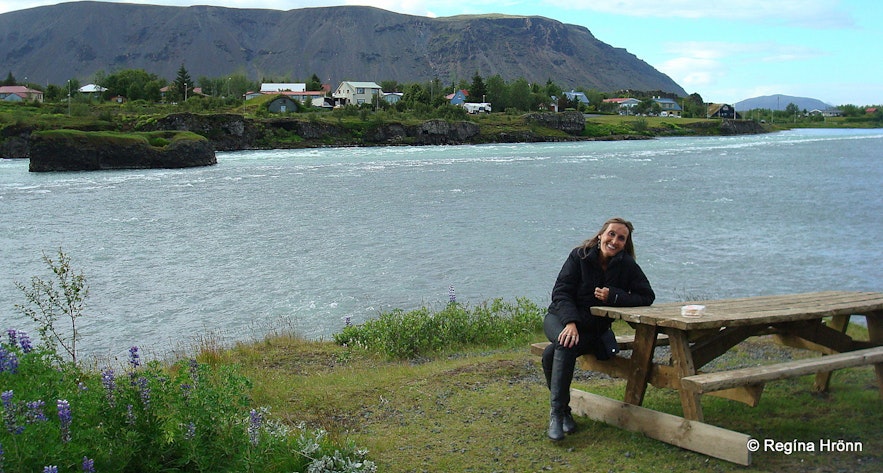 In this photo from 2008, you can see that there is no Christmas tree on the rock - I don't know when it started growing on the rock

The story goes on to tell us how Jórunn or Jóra terrorized her neighbourhood until it became deserted. A young Icelandic man went to Norway and got advice from the Norwegian King on how to kill Jóra.

That part of the folklore tells us how Öxará river - the River of the Axe in Þingvellir national park got its name. 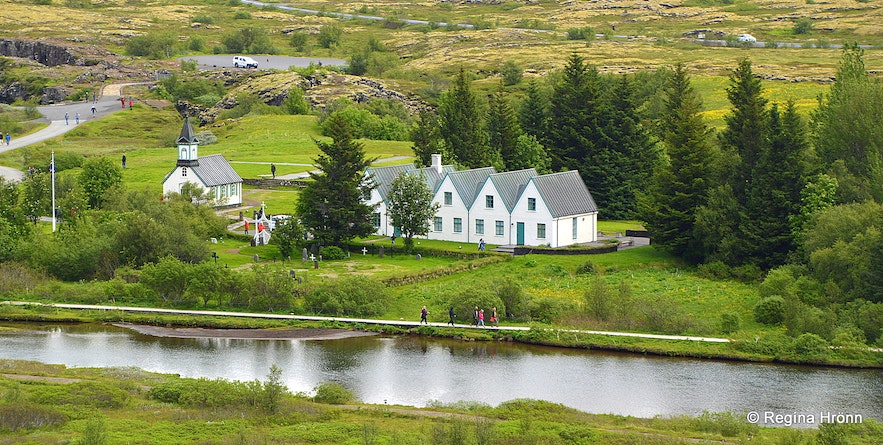 The king told him to visit Jóra at sunrise on Whitsunday as all evil beings and trolls sleep at that time. The king said: "You will find Jóra asleep on her stomach.

Here is an axe I want to give to you" - and the king handed him a silver axe - "strike the troll with the axe between the shoulders.

Jóra will then wake up as she feels the pain, turn around, and say: "May your hands stick to the handle" - "You shall then say: "May the axe fall from the handle". 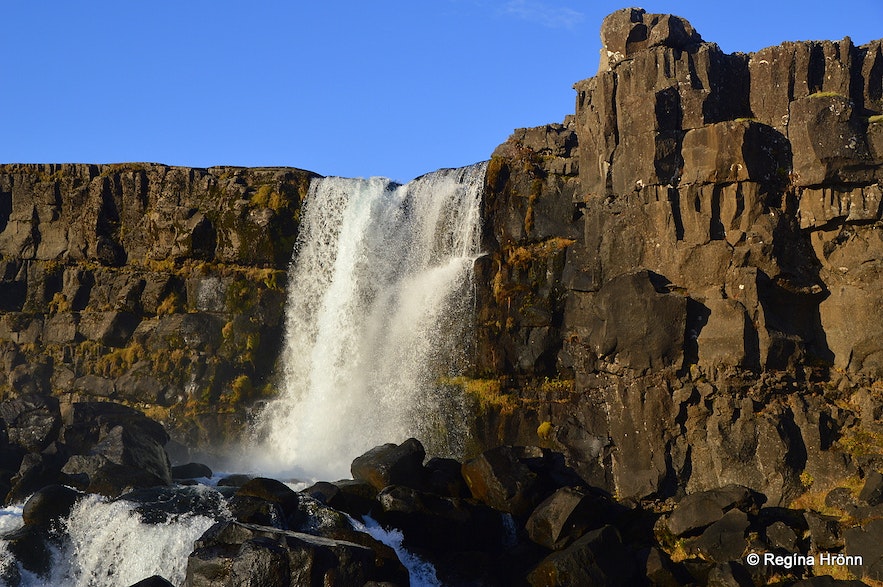 Both of these things will happen and Jóra will roll herself into the lake which is not far from Jórukleif, with the axe blade between her shoulders.

The blade of the axe will drift to the river, which will get its name, there Icelanders will choose a parliament site". 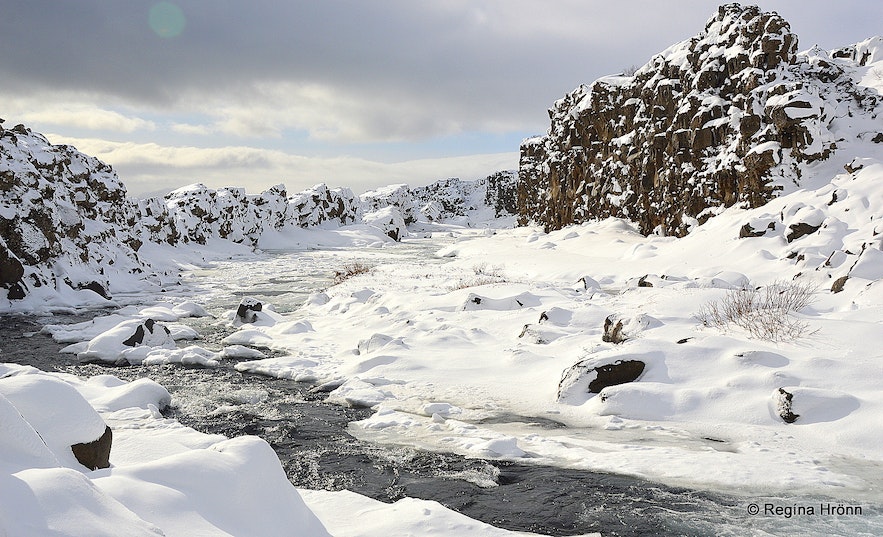 Öxará river in the snow

Such were the words of the king, but the young man went to Iceland and did everything exactly as the king had advised and killed Jóra.

The prophecy of the king came true, and the blade of the axe drifted into the river, which from then on is called Öxará, where Icelanders established their parliament. 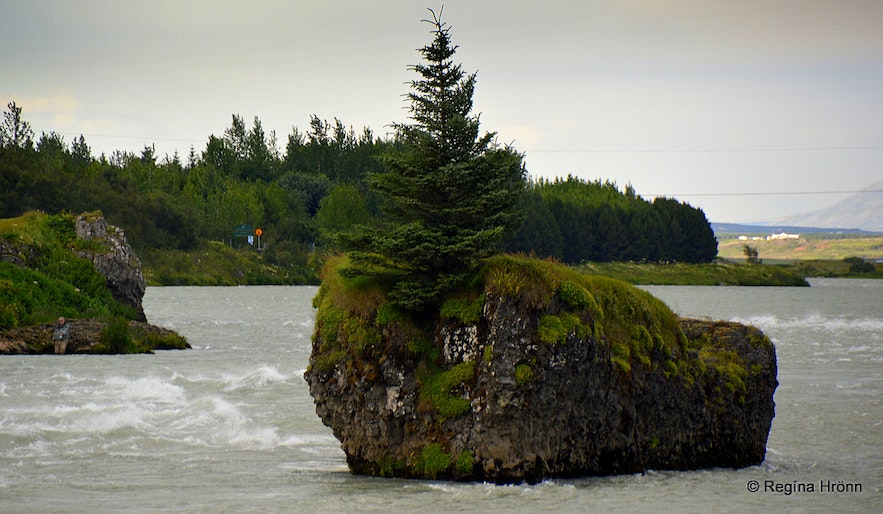 The rock in Ölfusá river

Now back to Ölfusá river. The milky white Ölfusá river is the largest river in Iceland by volume.

It runs by Selfoss town and into the sea a little bit further south. Hvítá glacial river, which is Iceland's 3rd longest river, and Sogið plus many other smaller rivers, join together to make Ölfusá this voluminous.

The mighty glacial river passes Selfoss town before it reaches the mouth of the river further south.

The long Hvítá glacial river originates in Langjökull glacier and forms the most famous waterfall in Iceland, Gullfoss - the Golden waterfall, which gives the Golden Circle its name.

The Lava Bubbles by Ölfusá River 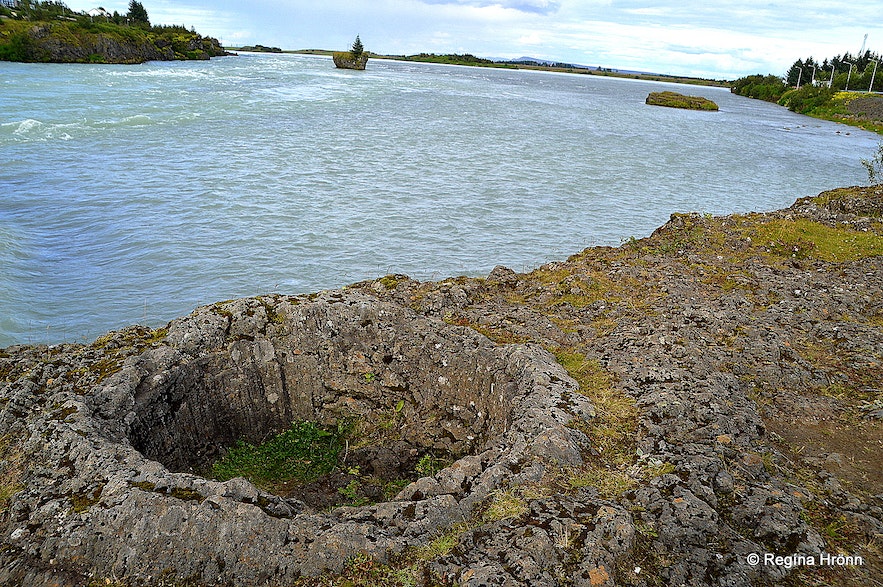 On the riverbank of Ölfusá just beneath Ölfusárbrú bridge, you will find fascinating lava formations, of which not many people take notice. Here the lava takes on the form of circular pots.

The lava pots are from 1-2 meters in diameter and up to half a meter deep. They were formed when huge gas bubbles arose from the molten lava flow.

Before they burst the lava walls around them cooled down, forming the circular lava pots. 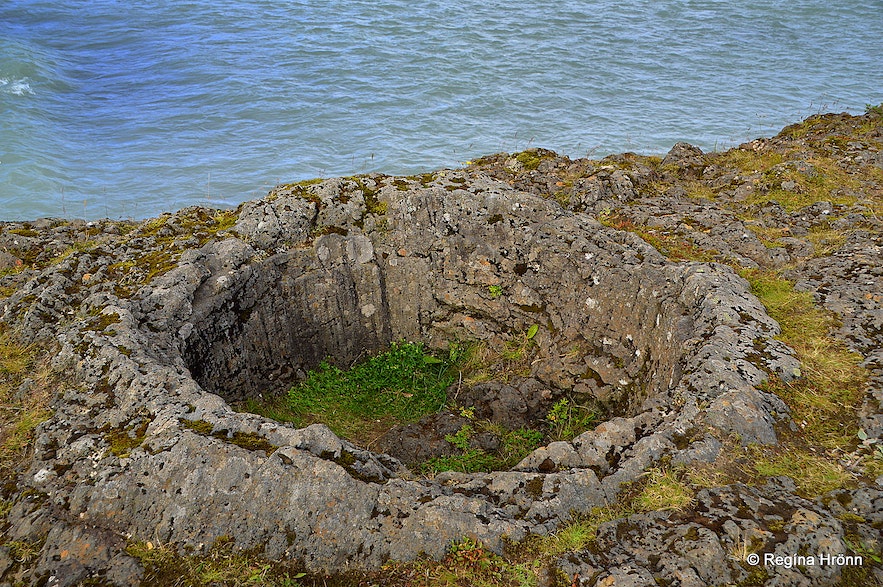 In my travel-blog about the Rauðhólar pseudocraters and Tröllabörn - the Troll Children hornitos I show you similar geological formations.

The lava pots are possibly the first stages of such a geological phenomenon, but instead of turning into a pseudocrater or a hornito lava pots were formed.

These geological formations are so special that they are listed on the Icelandic Nature Conservation Register (Náttúruminjaskrá) - yet so few people take notice of them. 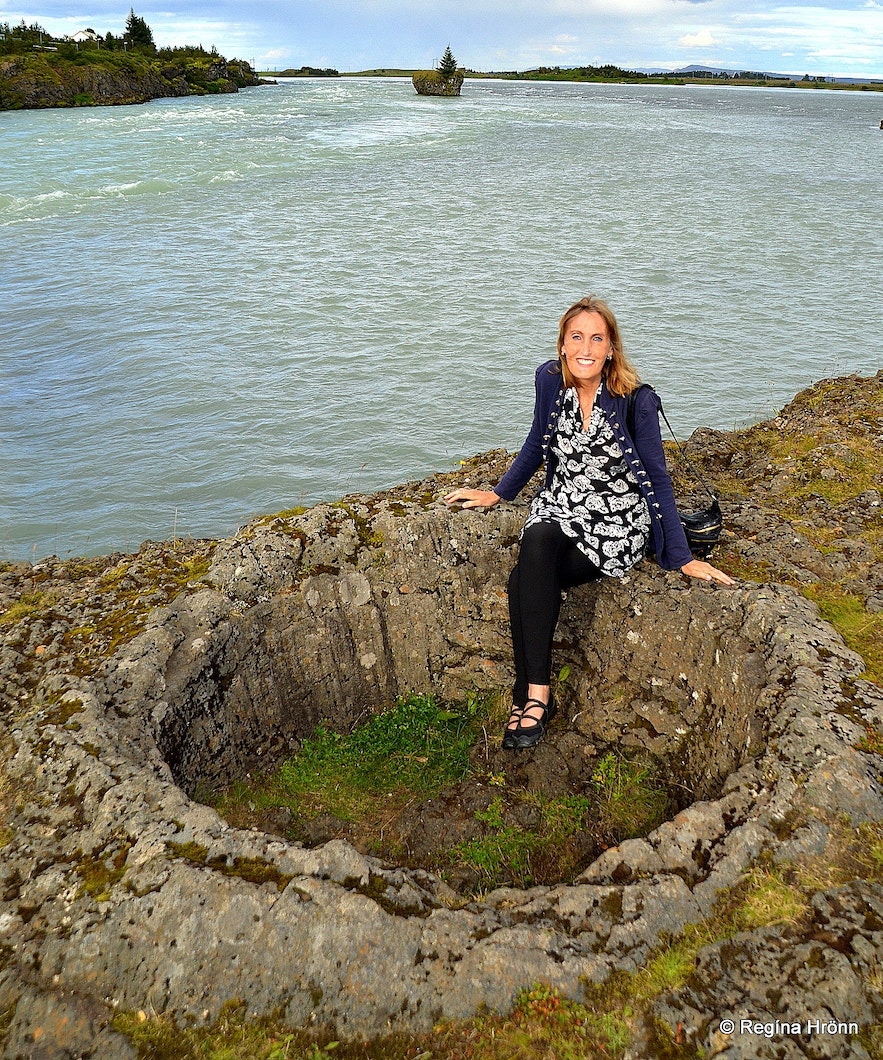 Sitting inside an old lava pot

These circular lava pots were formed in a massive lava flow, Þjórsárhraun, some 8,700 years ago. In fact, it was the largest lava flow on Earth since the Ice Age. The western edge of Þjórsárhraun lava flow forms the eastern bank of the glacial river Ölfusá.

I often pop down to the glacial river and have a seat in the biggest pot - see my photo above. In the background, you can see the rock that Jóra the Giantess threw into Ölfusá river.

You will find these lava pots beneath the Ölfusárbrú bridge after you cross the bridge to Selfoss town.

The information sign by the lava pots by Ölfusá river

The current bridge dates back to 1945, but this massive glacial river was first bridged back in 1891.

It was a suspension bridge, not meant for cars, and back in 1944 when two dairy trucks drove on the bridge, two suspension cables broke.

The meaning of the name Selfoss is the Waterfall of the Seals, as there used to be a lot of seals in the river by which Selfoss stands, Ölfusá river. I know this name is confusing and I have been asked where the waterfall is, but there is no waterfall here.

There is a waterfall though named Selfoss in Jökulsárgljúfur canyon in North Iceland above Dettifoss, the most powerful waterfall in Iceland.

Don't miss visiting the beautiful new colourful centre of Selfoss where replicas of old houses in Iceland have been erected. 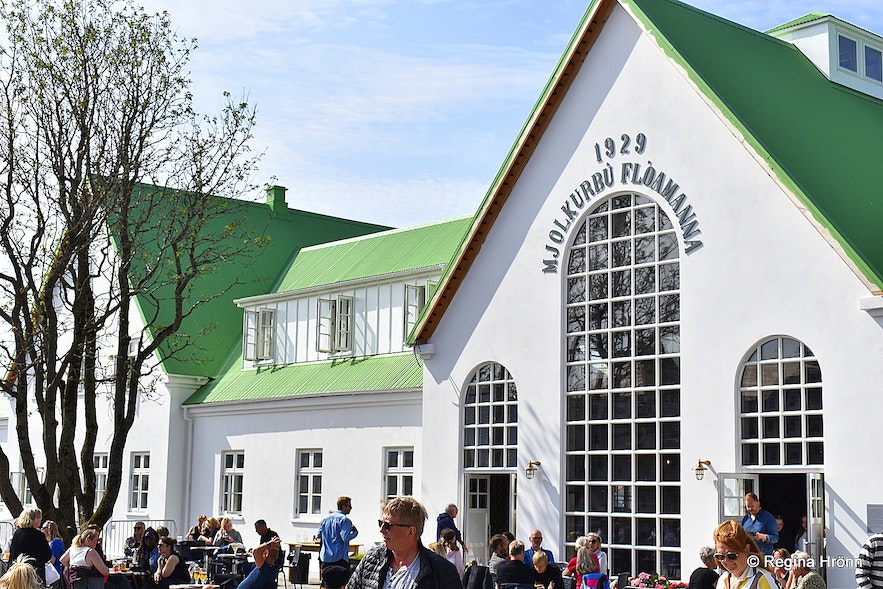 The new centre in Selfoss is a great addition to this lovely town, and a big attraction as you can see in my photo above.

More and more "old" houses are being built. A brilliant idea in my opinion. 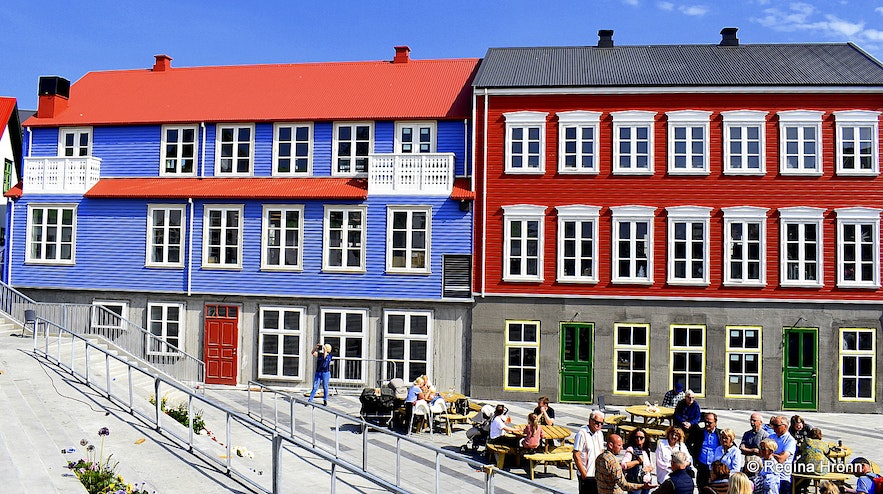 Colourful houses in the new centre of Selfoss

Selfoss is located by ring-road 1 some 55 km away from Reykjavík, Iceland's capital city. To reach this area, you can rent a car in Reykjavík and drive there in less than an hour.

If you take the first turn left on road 35 before driving onto the Ölfusárbrú bridge leading to Selfoss, you will reach Kerið crater, Skálholt Cathedral, Geysir geothermal area, and Gullfoss waterfall - some of the main stops on the Golden Circle.

A right turn on road 34 in Selfoss just after the bridge will take you to the lovely villages by the sea, Stokkseyri, and Eyrarbakki with its lovely old colourful houses. And if you drive through Selfoss on ring-road 1 you will reach all the wonderful sights on the south coast of Iceland.