Þeistareykjavirkjun, a new geothermal power station by Þeistareykir, run by the National Power Company of Iceland, started officially in November 2017, with the operation of the first phase in 2017 and the second phase in 2018. 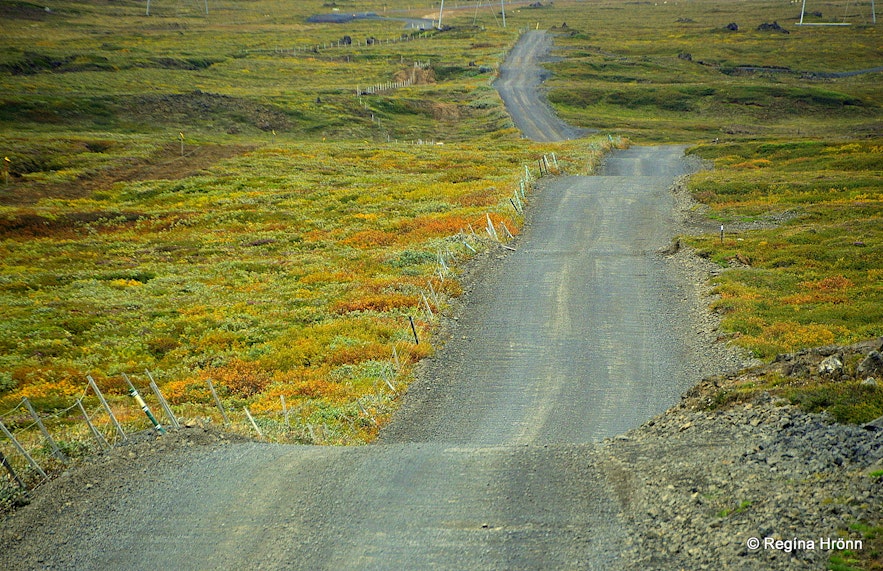 And a paved road now leads from Húsavík town straight to Þeistareykjavirkun geothermal power station, which makes it much easier to visit this beautiful geothermal area than before.

The old road is a bumpy gravel road, but ok as such. Earlier on, when I was little, we didn't have paved roads, so this is how we travelled in Iceland - on bumpy gravel roads, so it took us ages to travel in our country. Now in 2021 or next year, a new paved road will open instead of this old gravel road, which will make the access from Mývatn to Þeistareykir and Húsavík much easier. 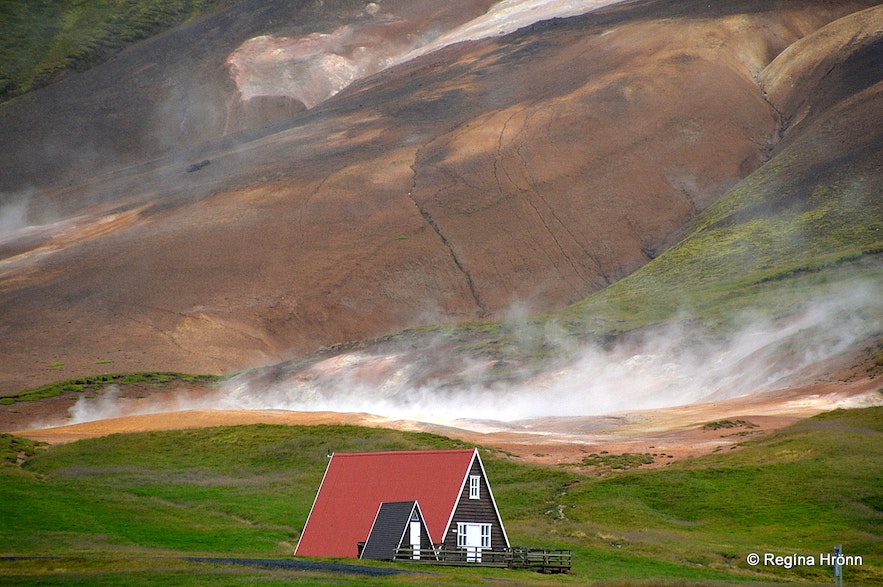 Þeistareykir geothermal area is located by the colourful Mt. Bæjarfjall which translates into farm mountain - there are several mountains with this name in Iceland.

Geothermal areas are at their most beautiful in the sunshine, and I always try to visit them in the sunshine to get the best photos, but when I am travelling up north, so far from Reykjavík in SW-Iceland, where I live, I don't have that privilege. When I first visited Þeistareykir it was pouring rain!

There was so much rain that I got totally drenched and had to constantly wipe the lens of the cameras. But still, I think that the photos look ok, given the circumstances. 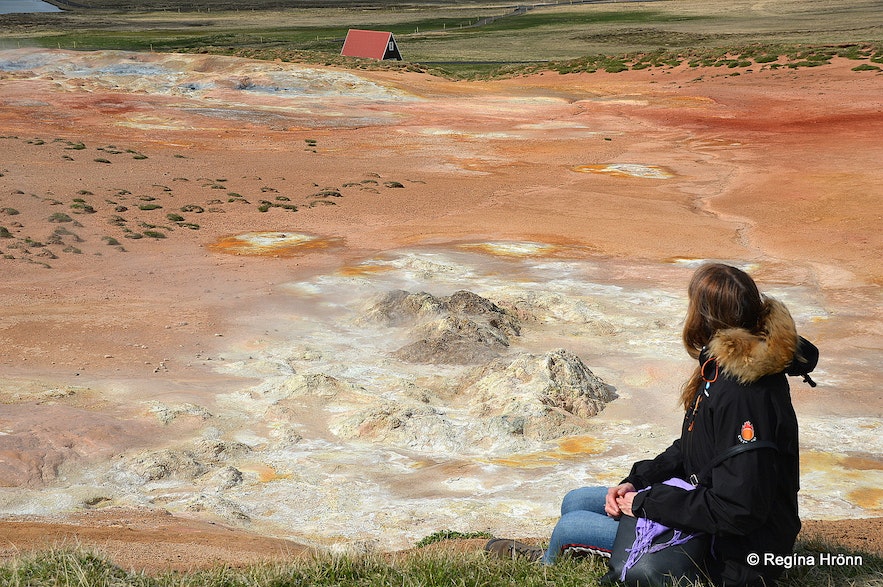 I visited this area again in the summer of 2019 and got some very much appreciated rays of sun, which lit up the beautiful geothermal colours.

At Þeistareykir you will find all kinds of hot springs and mud pools, fumaroles, and vivid geothermal colours. Here the earth is white and yellow, orange and bright red, brown and grey with fumes and emissions rising out of the earth where ever you look.

The yellow colour is sulfur and there was sulfur mining at Þeistareykir in earlier times, as in both the Mt. Námafjall area at Mývatn and the Krýsuvíkurhverir geothermal area in southwest Iceland. Our Danish king needed sulfur, which was used as gunpowder for the Danish army.

Here you will also find pinhole fumaroles. Not that I am a geologist, I am just trying to learn the names of all these various hot springs. I get information about the names of the hot springs and fumaroles on an excellent website about Volcanic springs around the world.

The vast Þeistareykjahraun lava field originated in a crater called Stórihver - Big Hot Spring some 2,400 years ago, making it the youngest lava field in this area. Here you will mainly find pahoehoe lava - also called ropy lava or helluhraun in Icelandic. Younger still, by far, is the lava field at Gjástykki east of Þeistareykir - it got created in the Krafla Fires in 1975-1984. 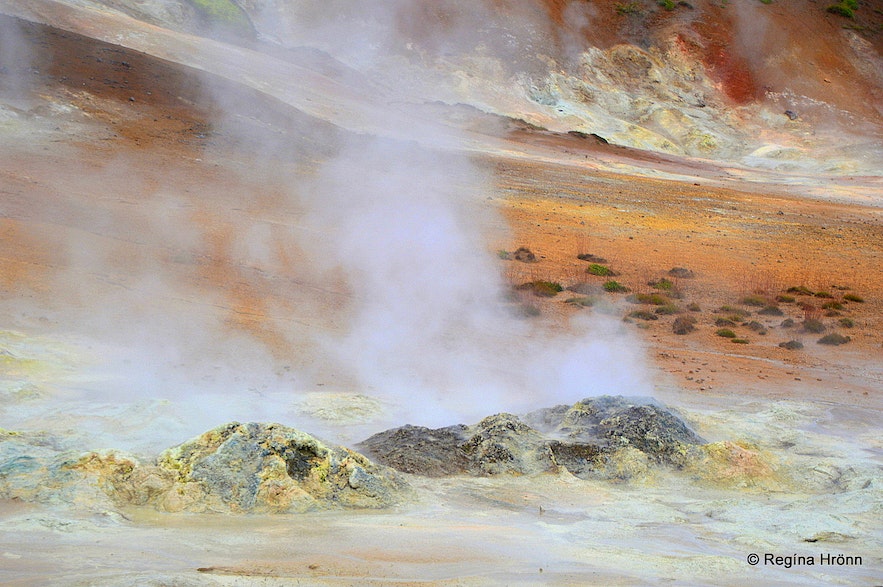 There is a much older lava field here as well, which flowed from Stóravíti - Big Hell. Þeistareykir is now on the Nature Conservation Register.

The first mention of Þeistareykir was in 1318 - and it was inhabited from the middle ages until 1873 with breaks - you will see why later in my travel-blog. Several ruins can be seen of the old habitation at Þeistareykir.

It must have been difficult living here, so far away from other farms. Here we find ourselves some 350 metres above sea level, whereas Húsavík, the nearest town, is by the seaside. Mývatnssveit is also this high up, but a much more populated area. 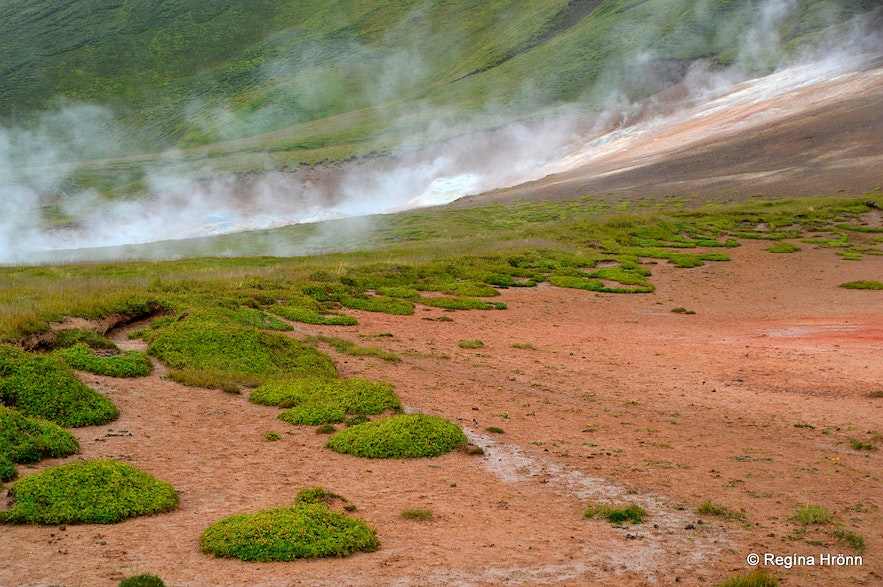 Old tales tell us that Þeistareykir was hunted after a man had died on the Reykjaheiði heath. His savage rust-brown dog managed to reach Þeistareykir only to die there. The dog returned as a ghost and got the name Þeistareykjamóri, haunting both men and horses.

Other tales are horror stories about two visits from the man-eater polar bears to Þeistareykir, which caused the farms to become deserted for some time. 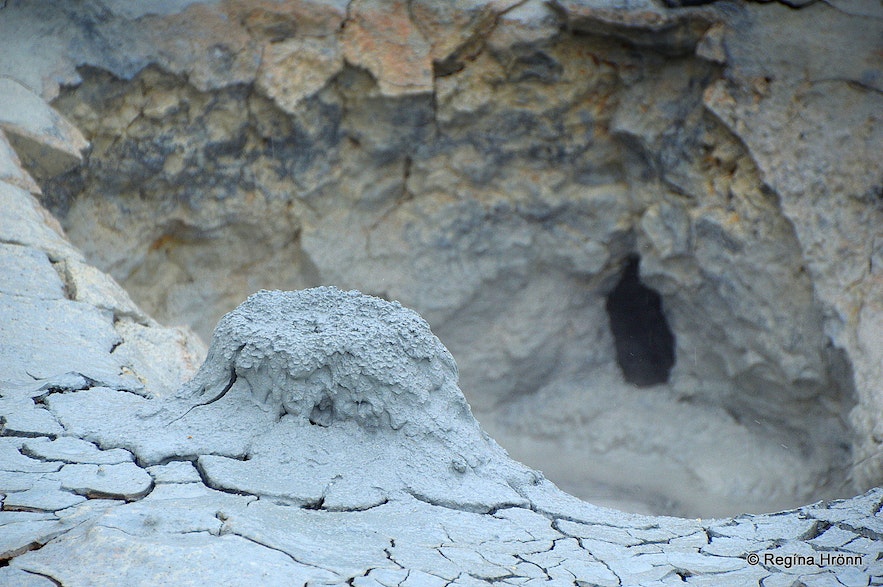 The story goes that the farm at Þeistareykir was twice abandoned after visits from polar bears. The first tale tells us of a young couple living at Þeistareykir. The farmer had gone to Tjörnes to cut a whale, as times were hard. A polar bear forced its way into the farm passage, but the young woman was able to scare it away.

The young farmers continued to live on the farm at Þeistareykir, but on one occasion as the farmer was returning back home from the nearest village, he met a polar bear with fresh meat in its mouth. It turned out to be flesh from his wife, which the polar bear had just killed! The farmer decided that it was time to move from Þeistareykir to Mývatnssveit. 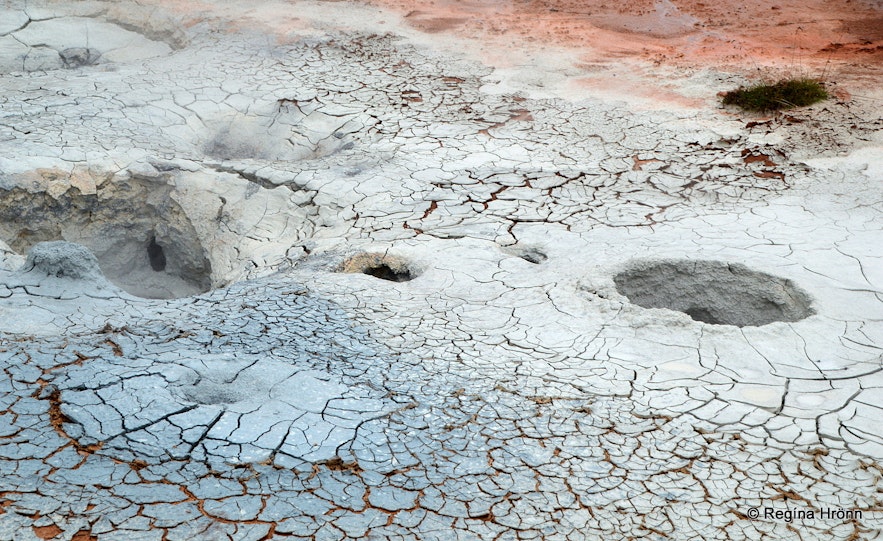 Another horror story from Þeistareykir tells us about a married couple with two sons living for some years at Þeistareykir. One harsh winter there was heavy frost and drift-ice appeared in the whole of North-Iceland. One morning the inhabitants of the farm were awakened by some racket in the farm. The door to their room was broken into pieces and a huge polar bear entered the room where the family was sleeping!

The farmer told his sons to stay in their beds and not to move an inch. He reached for a knife, but before he could reach it the polar bear slammed him with his huge paw, killed him, and started eating him! And his wife!! Meanwhile, their sons were lying absolutely still - scared stiff. As the polar bear had eaten its fill of the dead parents it left. 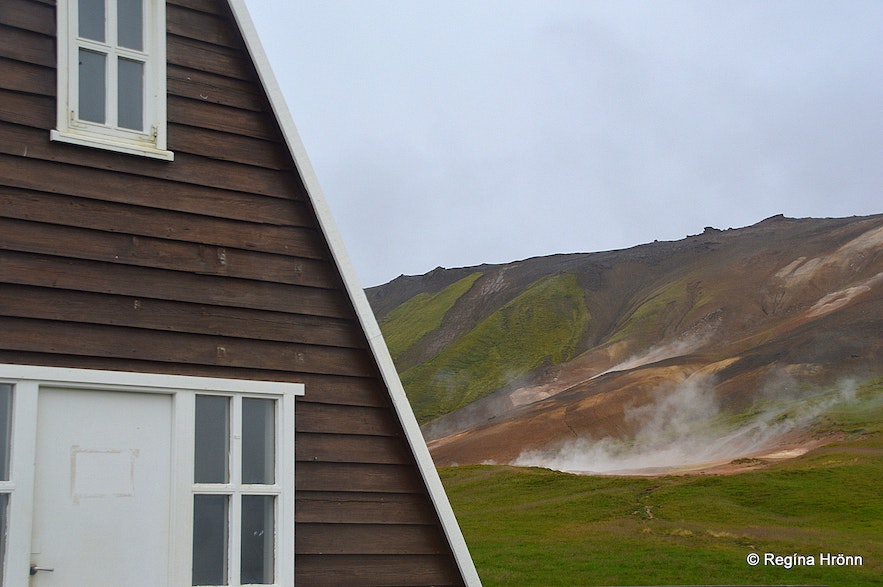 The boys, who were 10 and 12 years old, started plotting on how to save themselves from the polar bear and to revenge their parents, preferably by killing the polar bear. So when the polar bear returned to continue eating the dead parents the boys were ready and waiting for it. The younger boy arose from his bunker bed attracting the attention of the polar bear.

The polar bear rose up to look into the bed, and while it was standing on its hind legs looking for the boy, the older brother stuck the knife into its belly thus wounding it. The polar bear retreated and the boys were able to flee to Mývatnssveit. After this horrible incident, Þeistareykir became deserted for a while.

(This tale is found in the book Gróin spor pages 210-212 written by Jóhannes Friðlaugsson. I translated excerpts from it into English from this website). 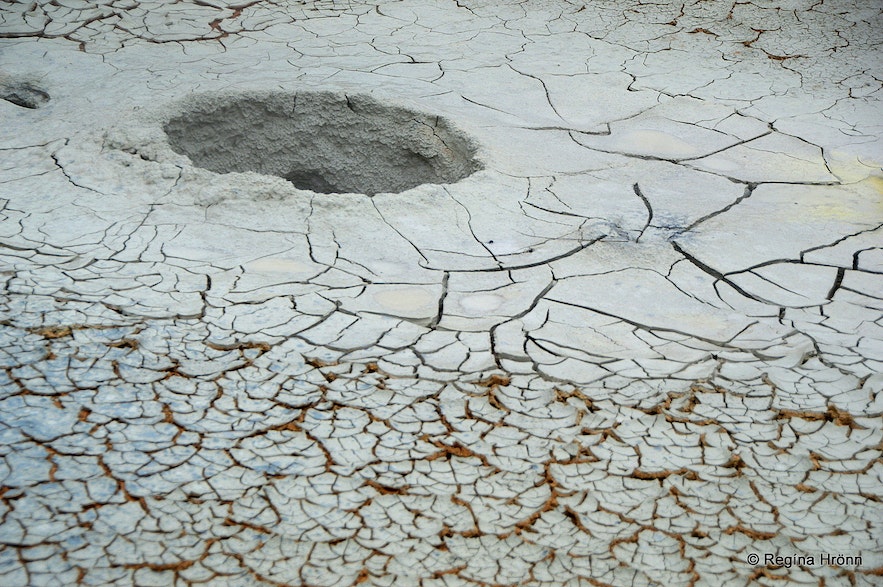 The Icelandic term for a polar bear is ísbjörn or drift-ice bear as that is how they end up in Iceland, drifting on ice from Greenland. Around 250 sightings of polar bears have been recorded in Iceland, with 500 individual bears. In 1880-1881 some 63 polar bears came ashore!

The most recent polar bears came ashore in 2016 at Skagi in North-Iceland. So when drift-ice is seen around Iceland we have to be on the lookout for polar bears. There were drift-ice sightings by Skagi when I was visiting Þeistareykir.

Apart from an occasional visit from polar bears these cannibals are not native to Iceland, as many people think. And they are not cuddly and will eat us if given a chance.

Sheep at Þeistareykir geothermal are

The only animals I spotted at Þeistareykir though were some sheep grazing in and by the geothermal area - I have noticed that sheep seem to like geothermal areas, there must be some minerals and salts that they seek here.

I later learnt that some 5,000 sheep graze by Þeistareykir. It is used as a grazing area for the neighbouring counties as it is very fertile and grassy. The brown hut with the red roof, which you see in some of my photos, is a ramblers' hut - a round-up hut.

A word of warning: do not venture out on the red mud by the parking lot in rain. I did so and the red mud sticks to your shoes big time - there was no way I could clean them before entering the car. I tried my utmost and got rid of some of the mud, but it was thick and heavy and extremely sticky.

I had to take off my shoes and scrape parts of the mud off the sole of the shoe and then put them in a sealable bag. It was raining heavily so of course, that contributed to my predicament. 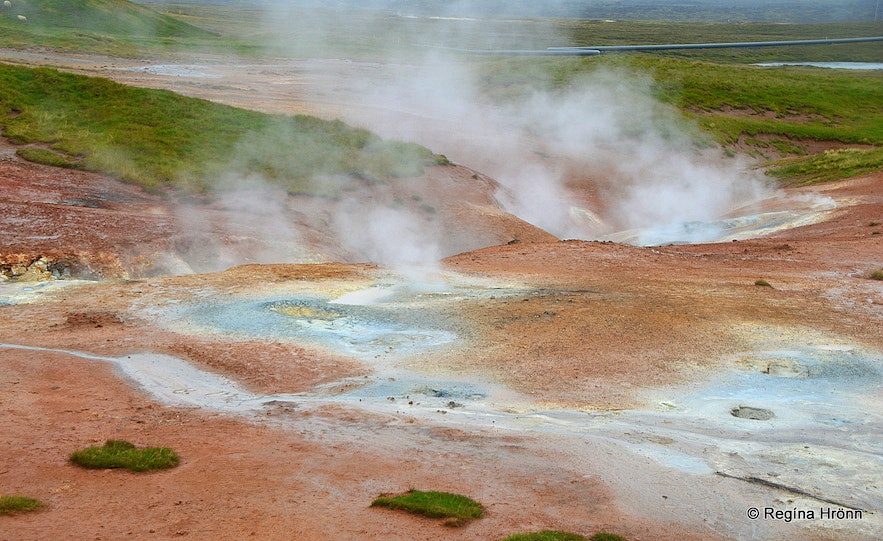 Also, be very careful while visiting geothermal areas. In the more visited geothermal areas, you can follow paths, which are never to be strayed from. But Þeistareykir is off the beaten path for travellers and there are no paths in the geothermal area. Which makes visiting it dangerous.

I stepped on grassy areas and didn't go further than my common sense advised me. My mother told me when I was younger that she had seen a man accidentally stepping into a hot spring that was hidden beneath the mud. The skin on his foot rolled up as he got such severe burns. So being extra careful in geothermal areas is of the utmost importance.

I took a video to show you:

On the way to Þeistareykir, I saw this beautiful sight (photo below). Steam was coming from the lava and moss-covered area by the road - the first sign of us being close to the geothermal area. There is something so mystical about seeing steam coming from the ground.

When driving in Iceland you will see such a sight in several places and then you know that you are driving by a high-temperature area.

I took the photo below of the new, paved road in 20 degrees C in August 2017. We meant to visit Þeistareykir back then but saw in the distance a sandstorm from Hólasandur blowing up. Sandstorms can ruin the paint on the car, so we decided on postponing our visit until a year later.

It was a letdown for sure, being so close to Þeistareykir, but I couldn't control the weather. 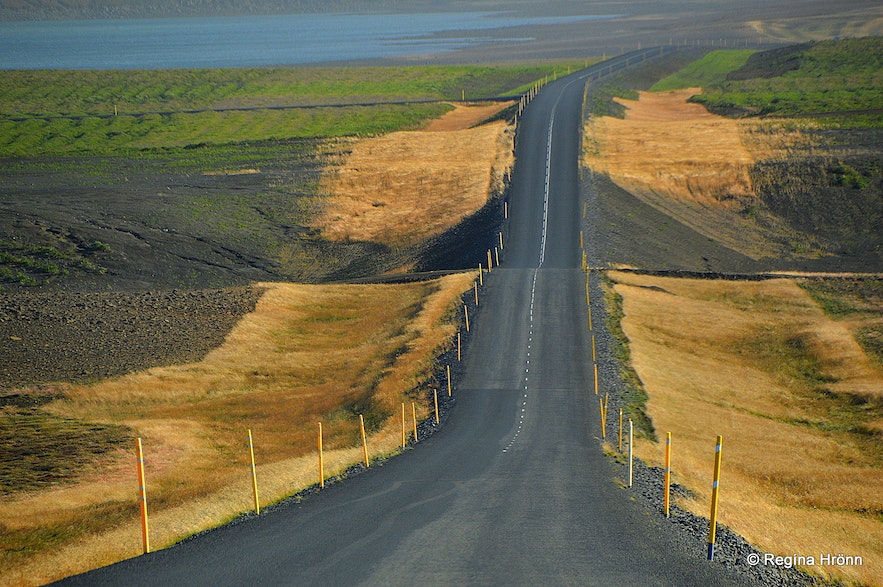 The paved road leading from Húsavík to Þeistareykir

Þeistareykir geothermal area is located some 25 km southeast of Húsavík. I have not yet come across any guided tours to this area. But you can rent a car in Reykjavík and explore this area on your own.

Have a lovely time exploring Þeistareykir and the wonderful Mývatn, but as always let's be very careful in geothermal areas.