Ingjaldshóll was in the possession of the powerful and wealthy Sturlunga Clan for a while, but they controlled this part of Iceland during the 12th and 13th centuries.

By the monuments at Ingjaldshóll

Ingjaldshóll came into the possession of the monastery at Helgafell from 1350-1550. Helgafell is another very historic place on the Snæfellsnes peninsula, which I have written about in The Holy Mt. Helgafell on the Snæfellsnes Peninsula & the 3 Wishes, which is a part of a series of travel-blogs about Snæfellsnes, where I show you the chronological order of visiting most of the interesting sights on the peninsula.

The church at Ingjaldshóll served a large congregation and until the 19th century, it was the 3rd largest church in Iceland. When the noted Eggert Ólafsson, natural scientist, poet and explorer, and Bjarni Pálsson saw this church on their exploration travels in 1754 they mentioned that this church was so large that it was almost as large as the cathedrals at the bishoprics at Skálholt and Hólar! 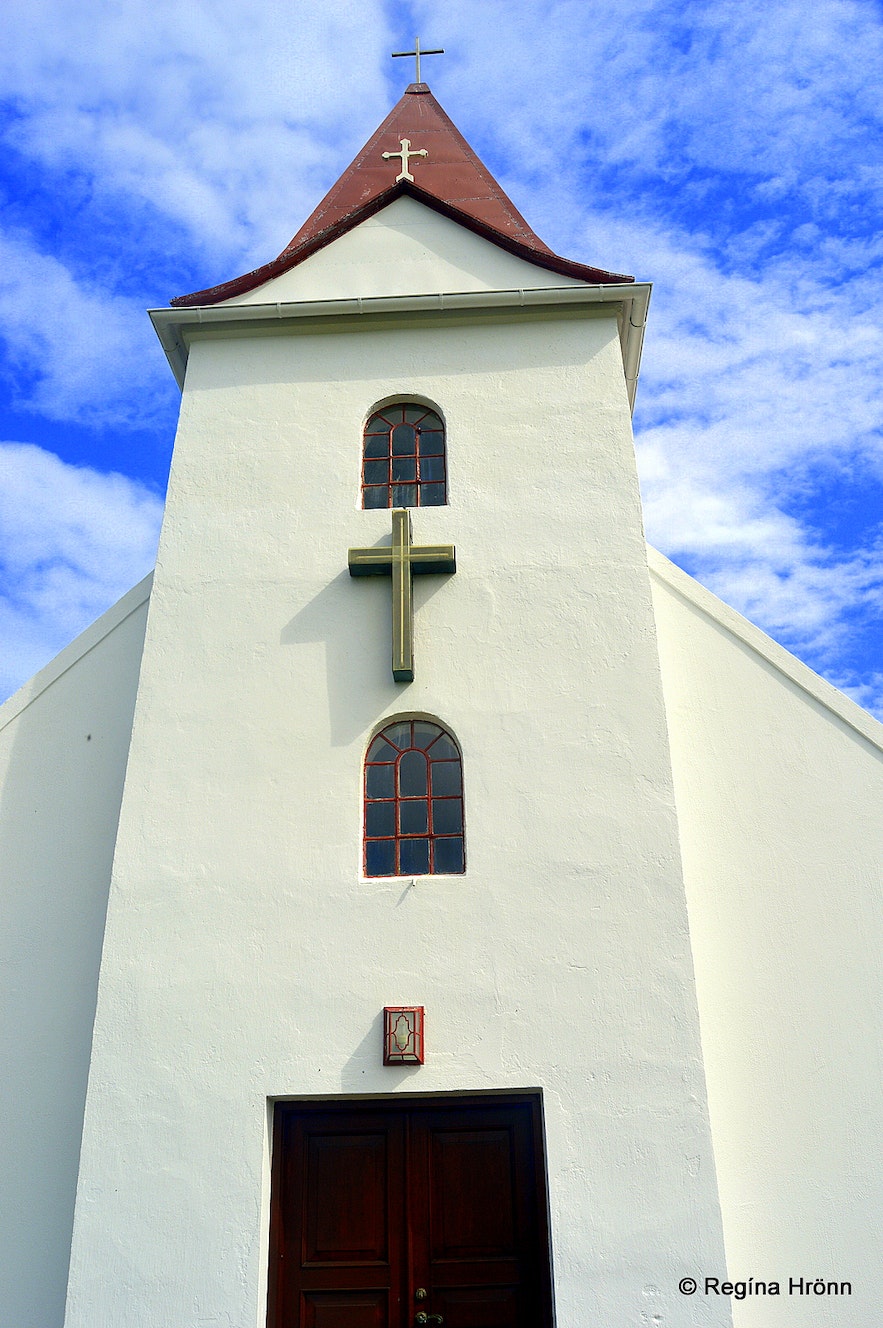 The current church at Ingjaldshóll serves the neighbouring villages Hellisandur and Rif and is the oldest concrete church in the world!

Behind the church, you will see a beautiful monument of the noted Eggert Ólafsson (1726-1768) and his wife Ingibjörg Guðmundsdóttir, made by the sculptor Páll Guðmundsson from Húsafell, but you can see his beautiful work in several locations in Iceland.

I was travelling up by Drangajökull glacier in a remote place on the north side of the Westfjords, and even there I saw the work of this great artist. 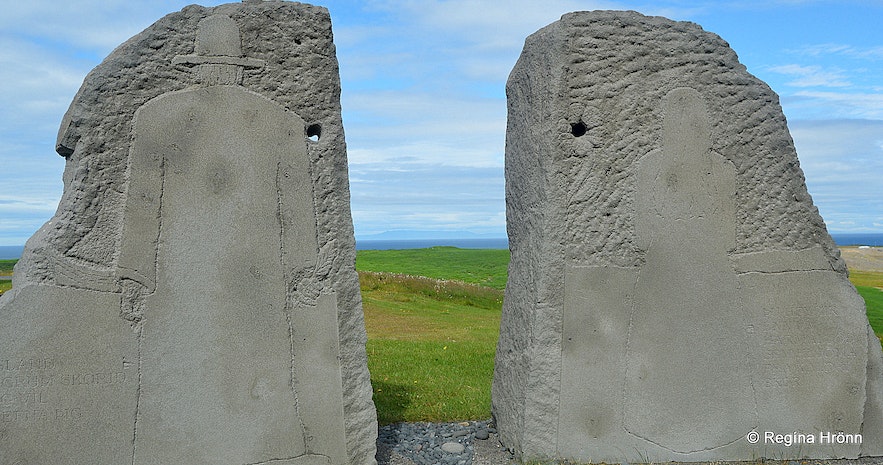 The monument for Eggert Ólafsson and Ingibjörg Guðmundsdóttir

The monument at Ingjaldshóll is erected in a clever manner, one of the rocks depicts Eggert Ólafsson, and the other one depicts his wife, Ingibjörg Guðmundsdóttir. The rocks weigh 9 tonnes and are 2 meters tall. It was originally one big rock.

From Skor at Rauðasandur Eggert and Ingibjörg went on their final voyage in 1798 and drowned. 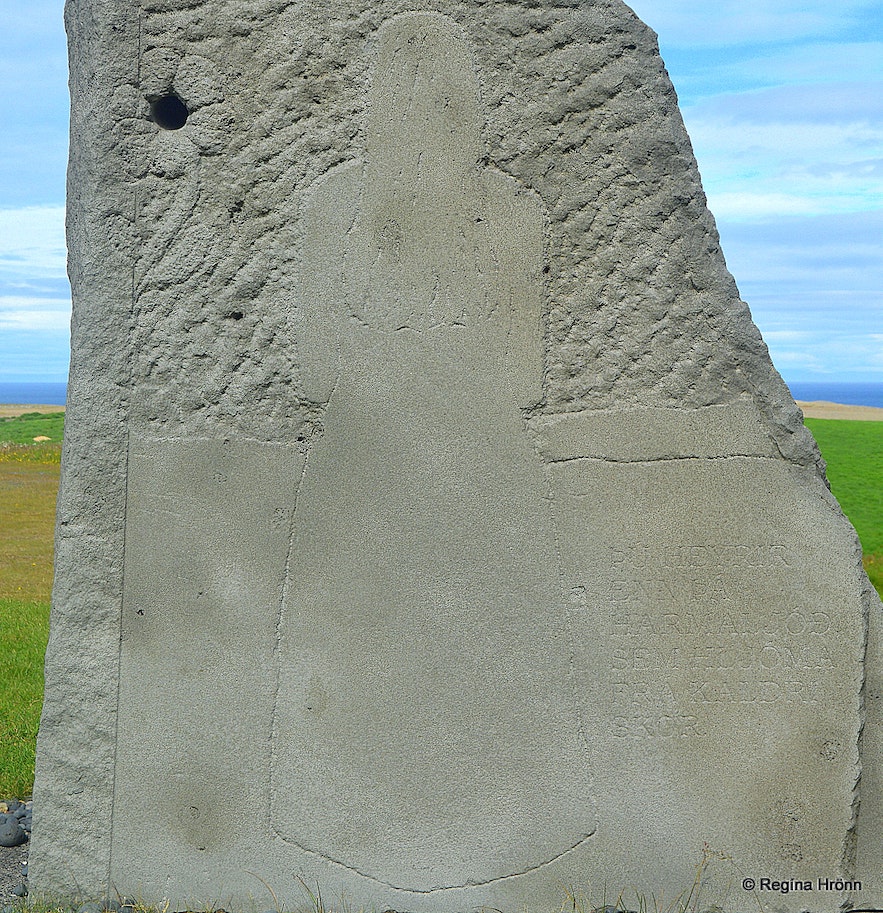 The monument of Ingibjörg Guðmundsdóttir

Eggert was in the foster care of his uncle, Guðmundur the Sheriff at Ingjaldshóll, for a period of time and later married his own niece, Ingibjörg Guðmundsdóttir, the daughter of the aforementioned uncle from Ingjaldshóll.

This is the reason for their monument being erected here at Ingjaldshóll, as both of them had ties to and grew up at this historic place.

They married at Reykholt and spent the winter in Sauðlauksdalur valley in the Westfjords, which by the way is the home of the first Icelandic potato farming. The next spring they meant to return and drowned on their final voyage in a major storm in 1798.  The whole nation mourned this great man and his wife. 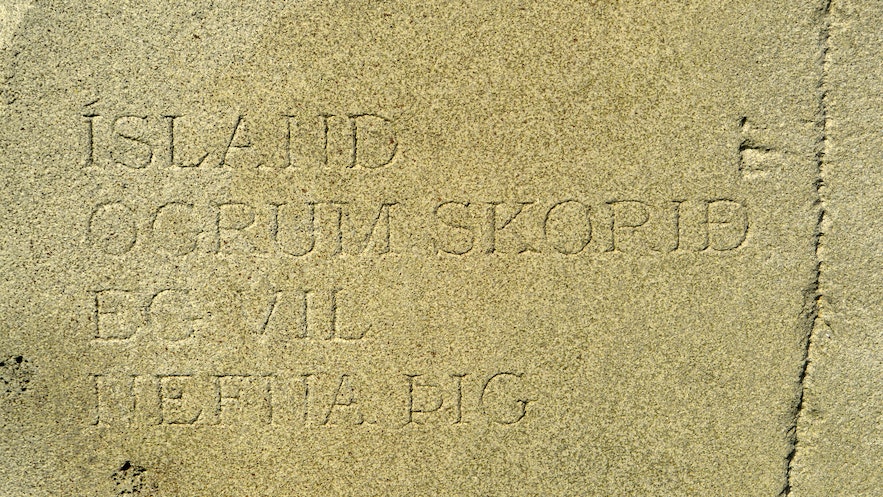 On the frontal side of the monument of Eggert Ólafsson, you will see the above writing. It is the first part of a beautiful, magnificent poem written by Eggert:

We Icelanders learn this poem by heart at school, and it has always been very close to my heart. It somehow expresses the spirit of Icelanders, in my opinion. 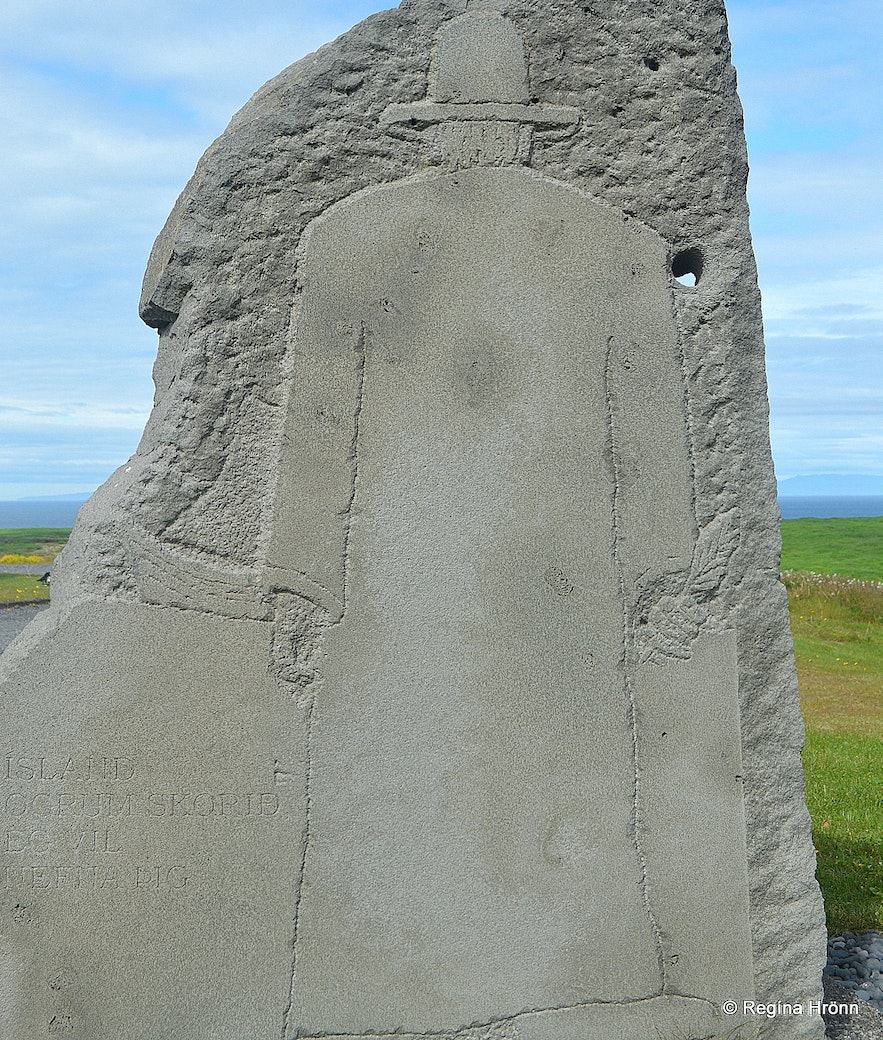 The monument of Eggert Ólafsson

According to Landnáma - the Book of Settlement in Iceland - chapter 29, Ingjaldur Alfarinsson settled here at Ingjaldshóll.  You can also read about the settlers of the Snæfellsnes peninsula in the Saga of Bárður Snæfellsás, which is a really interesting read (Ingjaldur is mentioned in chapter 8).

I have written a special travel-blog about Báður Snæfellsás - the mythical Protector of the Snæfellsnes peninsula.

There you can read about the giantess Hetta in Mt. Ennisfjall, but Ingjaldur and Hetta had a disagreement when Hetta was caught stealing Ingjaldur's sheep. As a negotiation effort, Hetta told him about a rich fishing ground - but Hetta wanted Ingjaldur dead!

Seeing that Hetta was a giantess/troll, which can also be understood as a sorceress, she conjured up a storm when Ingjaldur was out fishing as to drown him and thus get rid of him. The Saga of Bárður Snæfellsás tells of Bárður rescuing Ingjaldur after Ingjaldur had called upon Bárður in his hour of need. 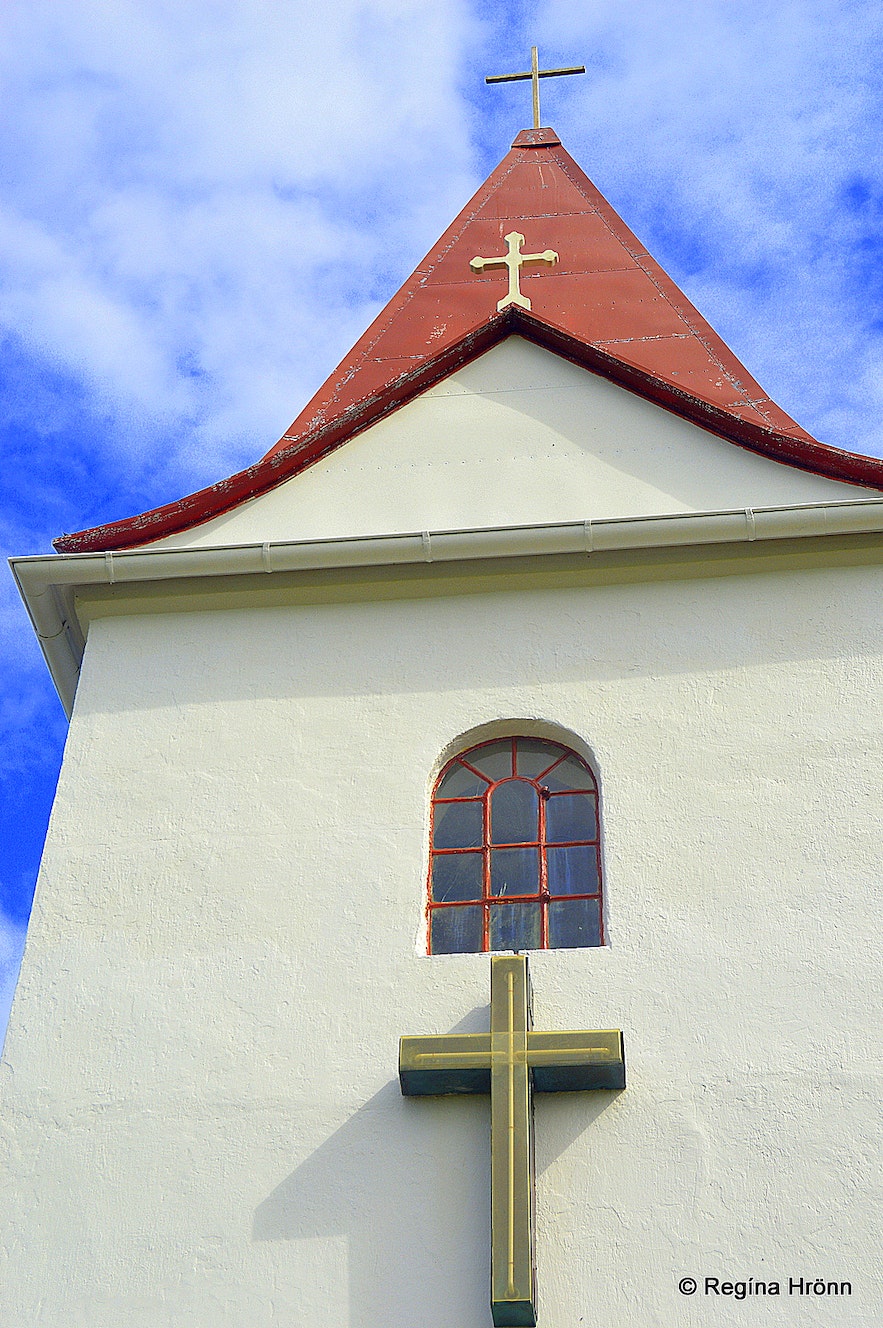 What many might not know is that Christopher Columbus seems to have stayed at Ingjaldshóll during the winter of 1477-78. But as is well known then Icelanders, Leif the Lucky, were the first Caucasian people to discover America or Vínland, and the first Caucasian child born in America was Icelandic.

Columbus apparently knew about this voyage and wanted to get some information and tips about the Viking voyages before starting on his own journey west.

The church was closed so we peeked through the windows of the parish house as I knew that there was a painting of Christopher Columbus on the wall, depicting him talking to the priest during his stay at Ingjaldshóll.

Ingjaldshólskirkja church and the parish house

I saw the painting through the window but will phone ahead next time I visit this area and ask them to show me both the painting and the church.

There is a view-dial a little bit further than Ingjaldshóll - in a place called Háholt. The view-dial is 41 meters above sea level and shows the names and height of the mountains in the vicinity.

When my husband was photographing the view-dial from every corner and every angle I could see the Arctic tern attacking him at great speed like fighter planes. He was using my "good" camera and I only had one small one and took photos of him while I was hiding inside our car. These birds are so fast that they came out as white rays in my photo below :) 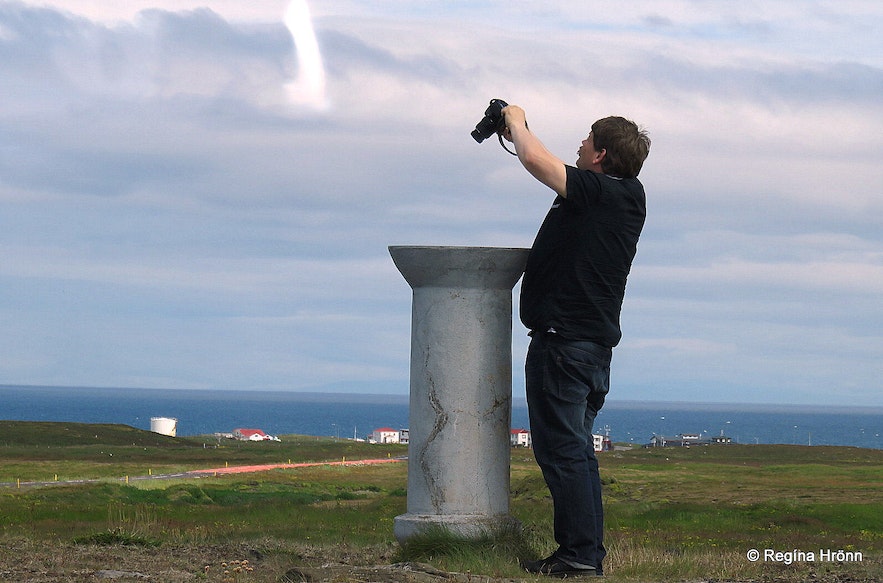 If you want to visit this view-dial then turn right by the sign on which is written Sjónskífa. Here you can see the location of the gravel road for the view-dial.  Let's return back to road 574 and drive for 1 km towards the small village of Rif, which you will see on your left-hand side.

To visit this area it is best to rent a car in Reykjavík and spend a couple of days exploring the whole Snæfellsnes peninsula.

If you want to read up on the Magical Snæfellsnes Peninsula then I have written an I-V part travel-blog on what there is to see and do here on the peninsula:

Here you can see the location of Ingjaldshólskirkja church on the map and if you zoom out you will see that it is located right between Hellissandur and Rif.

Have a lovely time exploring the Snæfellsnes peninsula :)