It is often a matter uncertainty the condition and/or type of road we have here in the Westfjords and whether you can drive on them all the time. This confusion is completely understandable considering the variety of road types we have in the area and the fact that the road numbers don´t define a certain road type.

For example the road 60 is both hard surfaced and gravel sporadically along its route. Added to this confusion is the fact that a lot of the roads in the region have been “upgraded” from gravel to hard surfaced only recently so alot of maps are out dated showing gravel roads where they are now tarmac and omitting bridges which now span certain fjords. (For point of reference this blog was written in February 2016.) 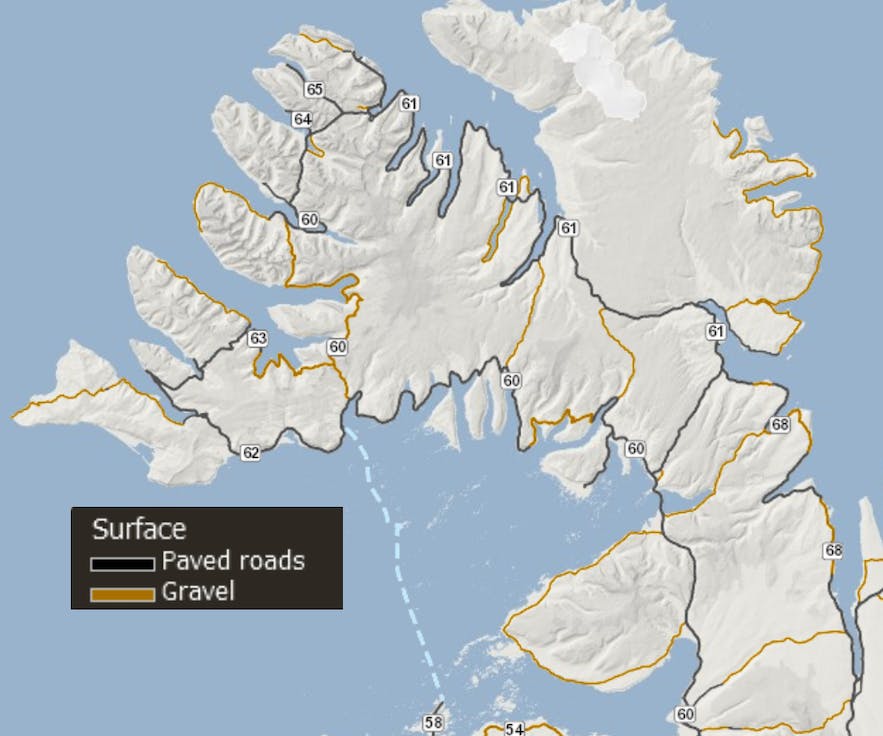 During the winter time not all roads are equal to where and when they are serviced with snow clearance and graveling, this can lead to a lot of confusion for where you are able to drive. The picture below shows the differing levels of service on each of the road sections 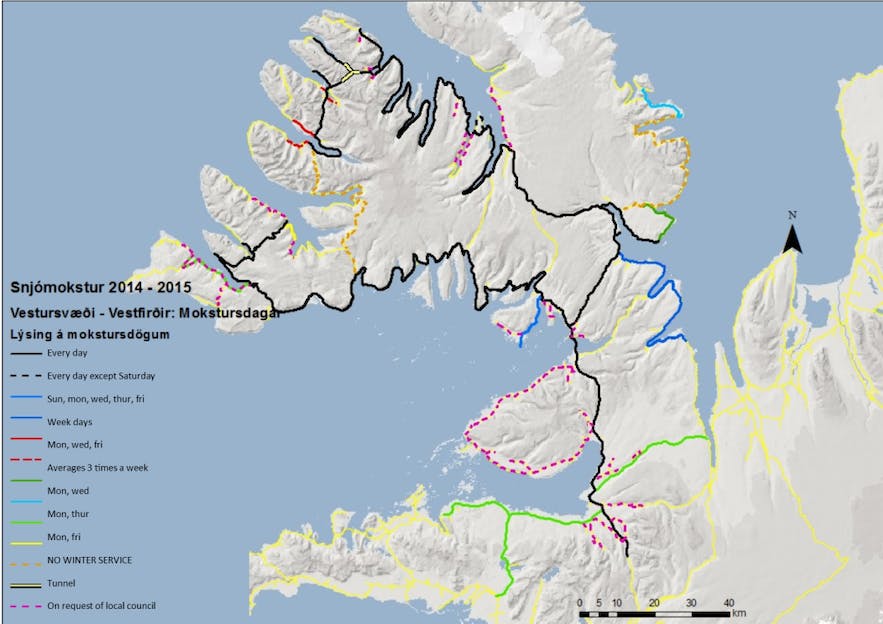 The best way to go about the road conditions is to divide the area up into its 4 basic sub regions as shown below, each with a corresponding road number and/or name. The regions are: 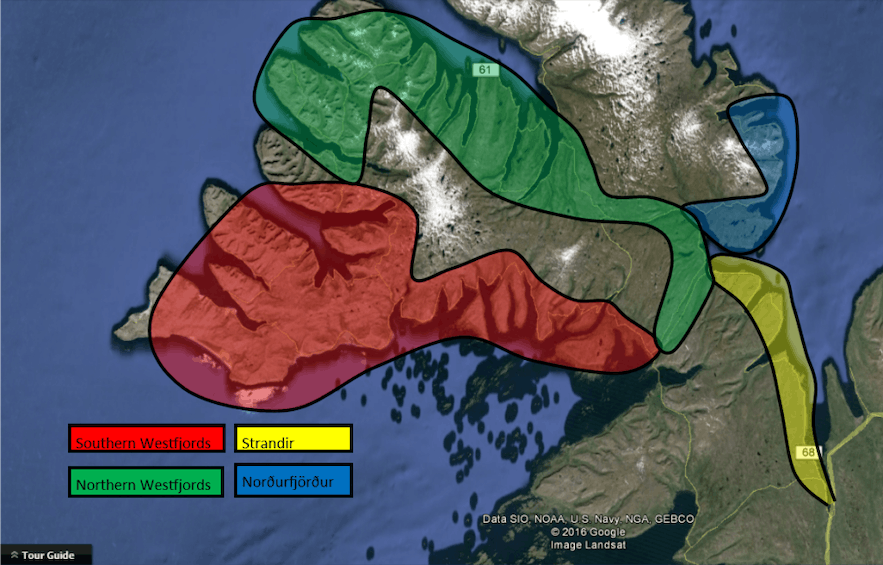 Road number 68 leaves the ring road just after the large N1 petrol station (if you are heading North from Reykjavík) and leads you up through the Strandir region of the Westfjords, past the small village of Borðeyri and all the way to Hólmavík. The road begins as hard surfaced but then turns to gravel after around 40/50kms and is then an intermittent gravel/tarmac surface until it connects with the road 61(Djúpavegur) just before Hólmavík.

During its coarse the roads winds around some very tight bends and there are 2 steep climbs and descents on gravel roads. It is a beautiful and scenic drive but is a bumpy one at points and care must be taken when on the gravel sections.

During the winter the lower part of the road is serviced with snow clearance and the higher part serviced every weekday between 09:00-19:00

Vestfjarðavegur or the Road 60 is a mostly hard surfaced road which leads from the ring road all the way to the towns of Patreksfjörður, Talknafjörður and Bíldudalur (although technically they are all on the roads 62/63) There is a short gravel section around the Djúpidalur region and then a large unpaved and quite bumpy section from the turning to Patreksfjörður on the 62 road all the way to Þingeyri, with 2 high mountain passes and the popular Dynjandi waterfall.

In the winter the roads 60, 62 and 63 are serviced for snow clearance 7 days a week between 10:00 and 17:30 EXCEPT the unpaved section from the road 62 turning to Þingeyri which is closed and inaccessible during the winter, roughly October to end of April, but this depends on snow fall. So you cannot drive to Dynjandi or between Ísafjörður & Patreksfjörður in winter.

It is indeed this section of the road that seems to cause the most confusion with many people planning on driving a winter circle of the Westfjords only to find that they can get no further than Bildudalur or þingeyri. During the spring and autumn there can also be difficulties with ice and snow on the high passes Dynjandisheiði and Hrafnseyrarheiði on this section.

Road 61 turns north off of the road 60 and leads to and past Hólmavík then onwards over the high Steingrimsfjörðurheiði pass and eventually leading to Ísafjörður (which comes just after my village of Súðavík) Just before you reach the town of Ísafjörður the road 60 (Vestfjarðavegur) connects with the 61 and leads south through a tunnel past the villages of Suðureyri, Flateyri and þingeyri.

This entire section of road is hard surfaced, meaning a drive from Reykjavík to Ísafjörður never leaves a hard surfaced road and takes around 5 and a half hours without stops.

During the winter the road is serviced for snow clearance 7 days a week between 11:00 and 19:00. In high winds and heavy snowfall the Steingrimsfjarðaheiði pass is susceptible to closure.

The road 60 stops being cleared of snow from the village of Þingeyri south over the Hrafnseyrarheiði pass and passed the Dynjandi waterfall so you cannot drive to Dynjandi from Þingeyri in winter or therefore onto Patreksfjörður. During the spring and autumn the Hrafnseyrarheiði and Dynjandisheiði passes can become difficult due to ice and snowfall.

Road 634 runs east from the road 61 just after the village of Hólmavík soon reaching a junction with the 645 which leads to Drangsnes village and then onwards north to Djúpavík and from there still north to Norðurfjörður and the popular Krossnesslaug swimmingpool. The road is hard surfaced from its beginning and on to Drangsnes (on the 645) but there after is a fairly narrow and bumpy gravel road with a few sharp and almost blind turns which must be taken with care.

In winter the road is closed (or not serviced with snow clearance) essentially from Drangsnes onwards.