According to Icelandic folk tales, the two sisters (their names now lost to history) were engaged in all manner of sinful behaviour throughout their tenure at the convent. Collectively, they were accused of blasphemy against the Pope, carrying cardinal bread from the church, laying with men and selling their souls to the devil himself. Both women were burnt at the stake for their alleged crimes and buried on top of the rock that now bears their name.

Following the end of the Icelandic Reformation in 1550, one of the sister’s was posthumously recused of her crimes. It is said that flowers bloomed across her grave, while the grave of her more ethereally damned sister remained barren. It is possible to climb Sister’s Rock using a rope that has been left attached to the cliff side. There are two small tussocks atop Systrastapi that are alleged to be the sister’s graves.

Hiking to Sister’s Rock directly crosses the path of Rauðárfoss fall (“Red River Falls”), an incredibly stunning, basalt-column waterfall. Iron in the soil makes the colour of the rock and water appear a deep russet, whilst the gentle nature of Rauðárfoss’ current means the basalt stacks are clear to the eye. This creates a dazzling, artistic effect, making Rauðárfoss one of the most unique waterfalls in the country.

To reach Systrastapi, you will have to cross the Rauðárfoss outlet, little more than tip-toeing across a stream, to the grassy fields on the other side. Sister’s Rock is ahead, standing out from the greenery as a jet black obelisk.

For those unable to climb to the top of Sisters' Rock, a narrow footpath along the river Skaftá below makes for an extremely pleasant walk. Here, it is possible to point to where a lava flow stopped and fell into the river. then it is lovely just walking around the rock on a narrow footpath and to walk further up the river Skaftá. This area is named Eldmessutangi (“the Spit of Fire.”) 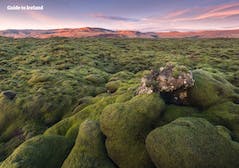 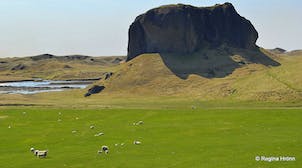 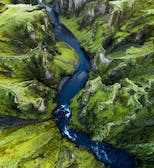