Systrafoss waterfall is located on the South Coast of Iceland, in the village of Kirkjubaejarklaustur.

The waterfall's location beside Iceland's Road 1 makes it a perfect stop for many Ring Road tours. Those tours include pre-made and self-drive tours such as the summer tour of the Ring Road and the South Coast. Moreover, the village is a popular starting and end point for South Iceland tours, such as the Epic Tour of Lakakigar Craters and Fagrifoss.

Systrafoss waterfall may appear to be another roadside waterfall in South Iceland, but it has a rich history, and its location in Kirkjubaejarklaustur creates a picturesque background for the village.

The beautiful waterfall of Kirkjubaejarklaustur may look like just an ordinary waterfall. However, this is not the case since it comprises two cascading streams of similar heights. This feature makes the waterfall beautiful as its streams cascade on the slanted part of a mountainside.

The waterfall is around 196 to 262 feet (60 to 80 meters) high. Meanwhile, a small lake, Systravatn, feeds the waterfall. Travelers can check out this lake if they walk to the top of the waterfall and walk a bit from there.

During winter, the waters of Systrafoss get frozen, which can look amazing when the sunlight shines on them. However, if you're planning to walk to the top of the waterfall, be careful, as the area can be slippery.

The Folklore and History of Systrafoss and Its Surroundings

The waterfall is teeming with religious folklore and history, which has added to its significance as an attraction. Also, many of those stories are greatly linked to Kirkjubaejarklaustur and the other attractions surrounding the waterfall.

The names Kirkjubaejarklaustur and Systrafoss have been around since the 1180s when the town is home to a Benedictine convent.

According to the local folklore, Systravatn lake, which feeds Systrafoss, was a bathing place for the monastery's nuns. One day, two nuns when to the lake to bathe and spotted a golden comb at the lake. The first goes into the lake to take the comb and drown.

The second nun also wants the comb but is unsure how to get it. After looking around, she spots a horse, but it's too tall to mount. Luckily, the horse kneeled, but once mounted, the nun rides into the lake, and neither she nor the horse was ever seen again.

If you think that's foreboding, it's nothing compared to another nearby attraction, Systrastapi rock, found west of Kirkjubaejarklaustur. According to local stories, two nuns were burned at stake and buried there. One is suspected of selling herself to the devil, desecrating the communion bread, and sleeping with men, while the other insulted the pope.

An added story to the legend also says that right after the reformation, followers bloomed on the grave of the nun who insulted the pope while the other remained barren. As such, she has since been vindicated by the church.

If you're willing to climb up the rock, you can find two rocks jutting from the surface, which are said to be the nuns' graves.

The small village of Kirkjubaejarklaustur is home to the Systrafoss waterfall. The village is located by the Ring Road and is one of the few settlements you can pass by before reaching Vatnajokull National Park's Skaftafell Nature Reserve.

How to Get to Systrafoss Waterfall

Systrafoss waterfall is 170 miles (273 kilometers) away from Reykjavik and is easily accessible from the Ring Road's Route 1. You'll pass by many South Iceland towns, such as Selfoss, Hvolsvollur, and Vik i Myrdal, before arriving at the village of Kirkjubaejarklaustur.

Once you reach Kirkjubaejarklaustur, continue driving on Route 1 until you reach a roundabout, then turn to Road 205, to get to the waterfall. There's a parking lot at the foot of the waterfall, which you can use if you want to go up the trail to the Systrafoss.

Is There Anything Else Near Systrafoss Waterfall?

The waterfall's proximity to Iceland's famous Ring Road ensures you're near some of the best attractions in South Iceland. Meanwhile, its location inside a village also means essential services and establishments are nearby. 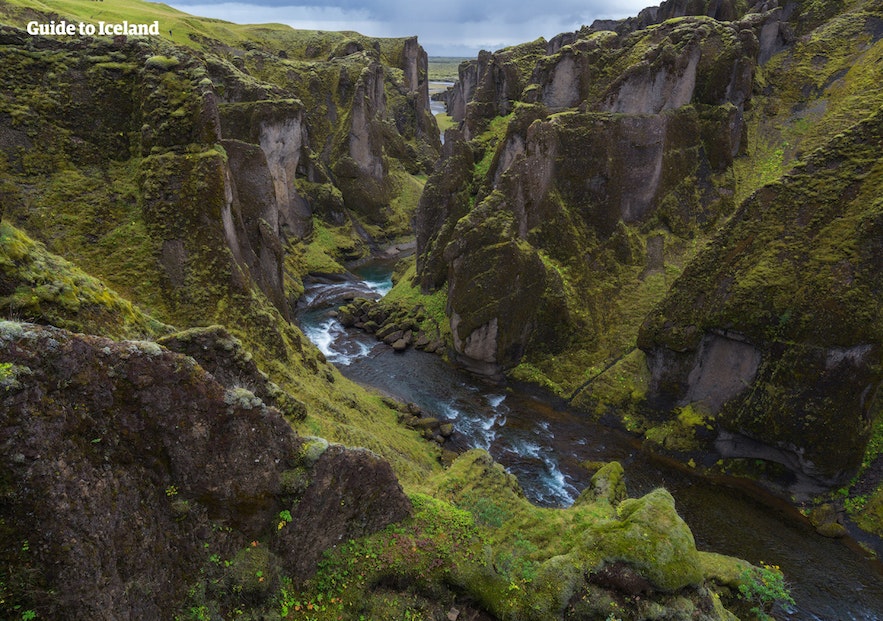 You don't need to go that far to find other natural attractions near Systrafoss when many of them are already located in Kirkjubaejarklaustur or near its vicinity.

The nearest attraction from Systrafoss is its parent lake, Systravatn, which is located at the top of a mountain and is surrounded by a vast grassland.

Another nearby attraction from Systrafoss is Songhellirinn or the Singing Cave. While Systravatn is said to be the bathing place of nuns, Songhellirinn cave is where nuns would sing when monks visit them.

Another gem you should visit is the Fjadrargljufur canyon, located 6.8 miles (11 kilometers) from Systrafoss. The canyon is famous for its picturesque surroundings and serpent-shaped ledge. In fact, it has been featured in Justin Bieber's music video for "I'll Show You" and used as a setting in some scenes of the hit TV series, Game of Thrones.

The Jokulsarlon glacier lagoon, the most famous of its kind in the country, and the Skaftafell Nature Reserve are both located at the national park.

One of the best things about Systrafoss' location is its proximity to accommodations, which makes it easy to access. If you're on a Ring Road trip, it's also the perfect place to rest before continuing your journey.

While at Kirkjubaejarklaustur, you can stay at the Magma Hotel, located right next to lava fields. Meanwhile, Hotel Laki is nestled on the hillside of the village.