Hitardalur is an ancient manor estate and vicarage in the valley of the same name in West Iceland, close to Borgarnes.

Hitardalur is widely mentioned in old records. One of the most destructive fires in Icelandic history occurred in Hitardalur in 1148, claiming the lives of the bishop of Skalholt and 70-80 people who had gathered there for a feast. Eighteen years later a monastery is said to have been founded there, lasting until  1201, though any further records of it are scant, save for two abbots being consecrated there. It is believed to have been a Benedictine monastery.

From early age Hitardalur was considered one of the best vicarages in the country and many important priests and scholars resided there. Among them was pastor Vigfus Jonsson, who wrote the first Icelandic children‘s book.

Much lore surrounds the valley. The mountain above the valley is called Baejarfell. It is said that the she-troll Hit lived there, as described in the Saga of Bardur Snaefellssas. Bardur himself was a half-troll. The two pillars below the Hitardalur farm are said to be Hit and Bardur, turned to stone, though there are also claims that Bardur entered Snafellsjokull glacier and that the one pillar is thus another troll.

By the home field of the farm is the tuff rock Nafnaklettur ("The Rock of Names"). Many people have carved their initials there.

Many outlaws are said to have resided in Hitardalur, and this should not come as a surprise when one considers the fascinating caves that are located in Baejarfell. These are Songhellir ("The singing Cave"), Fjarhellir ("Sheep Cave"), Paradis ("Paradise") and Viti ("Hell‘).

The river Hitara runs through the valley. Plenty of good salmon fishing can be made there. The bottom of the valley is largely covered by lava fields and soil erosion is strong.

The beautiful Hitarvatn lake is reached easily by jeep from the farm by a 4wd track. By the lake is a cabin where travellers can spend the night. 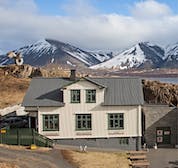 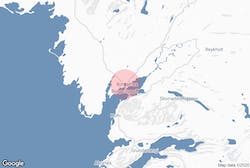 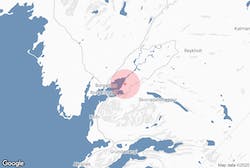