The glacial river Jökulsá á Fjöllum - the Glacial River in the Mountains is the second longest river in Iceland (206 km).

It is a roaring, turbulent milky white/greyish glacial river coming straight from Vatnajökull glacier, or Dyngjujökull glacier to be exact. 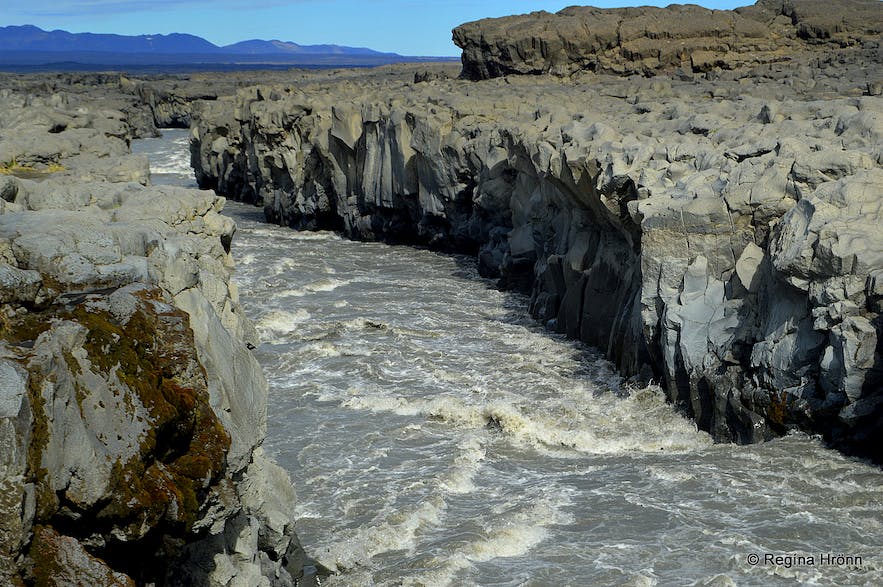 My first photos are taken in the highland of Iceland in the vicinity of Askja caldera and the small, but powerful waterfall in the glacial river is called Gljúfrasmiður - the Canyon Builder.

I have twice visited this area with Saga Travel on the way to Askja in the highland, as this is such a rugged area with glacial rivers to cross that a guided tour is needed. Unless you have a super jeep, which I don't own. 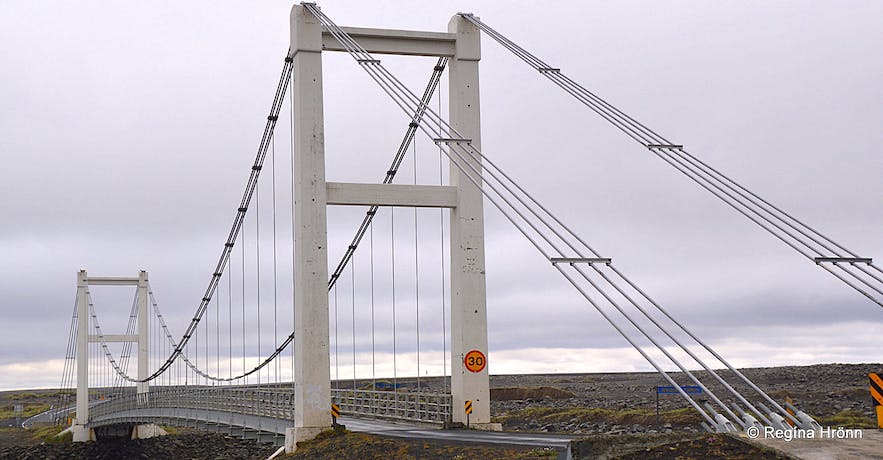 The massive bridge over Jökulsá á Fjöllum by ring-road 1

Jökulsá á Fjöllum glacial river is bridged in 3 places and on our travels in the highland of Iceland we crossed the glacial river on the bridge by Upptyppingar.

The other two bridges are by ring-road 1 and by the end of the Jökulsárgljúfur canyon by road 85. The bridge on ring-road 1 was built in 1947.

In the Jökulsárgljúfur canyon, the glacial river creates the most powerful waterfall in Iceland, Dettifoss waterfall, plus several other smaller waterfalls. 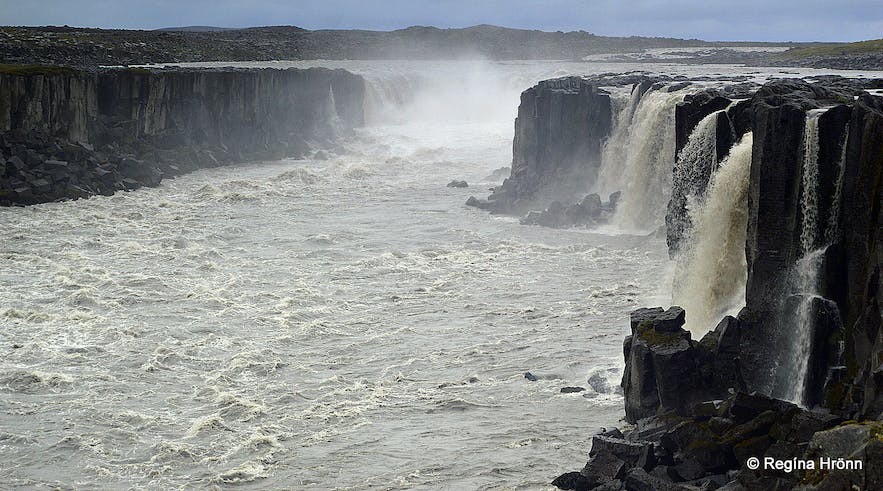 Selfoss as seen from the west bank

Dettifoss, along with the smaller waterfalls, Selfoss and Hafragilsfoss, which are south and north of Dettifoss, create a natural monument and have been declared as protected.  You will also find a very pretty horseshoe-shaped waterfall further down the canyon called Réttarfoss waterfall.

The first waterfall in the canyon is called Selfoss waterfall. It is a beautiful horseshoe-shaped waterfall, 10 meters high and very wide. I visited it from the west bank of the glacial river, but it cannot be seen very well from there. 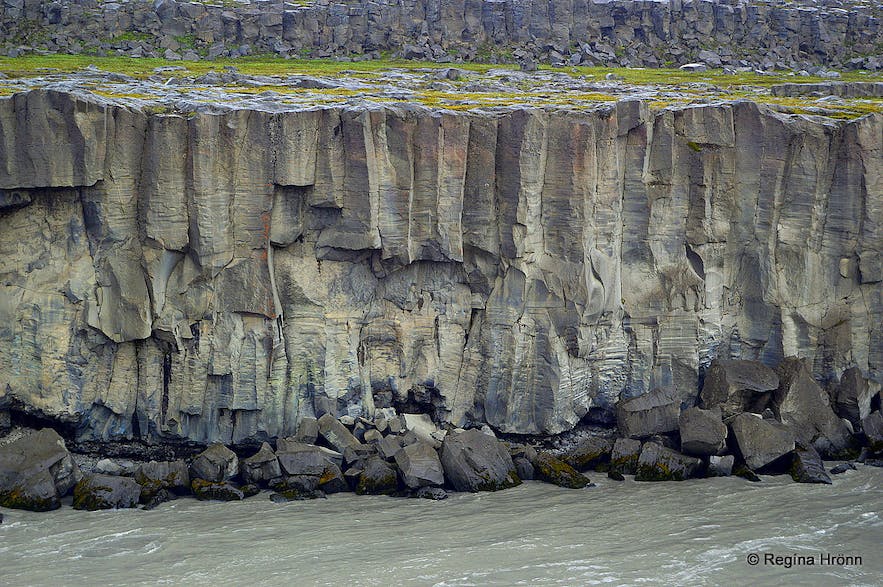 Basalt columns as seen from the west bank by Selfoss waterfall

There are some very beautiful basalt columns on each side of Jökulsá á Fjöllum glacial river by Selfoss. From the west bank of the river, there is an easy short hike to Selfoss waterfall.

Dettifoss waterfall - the most powerful of Iceland's waterfalls 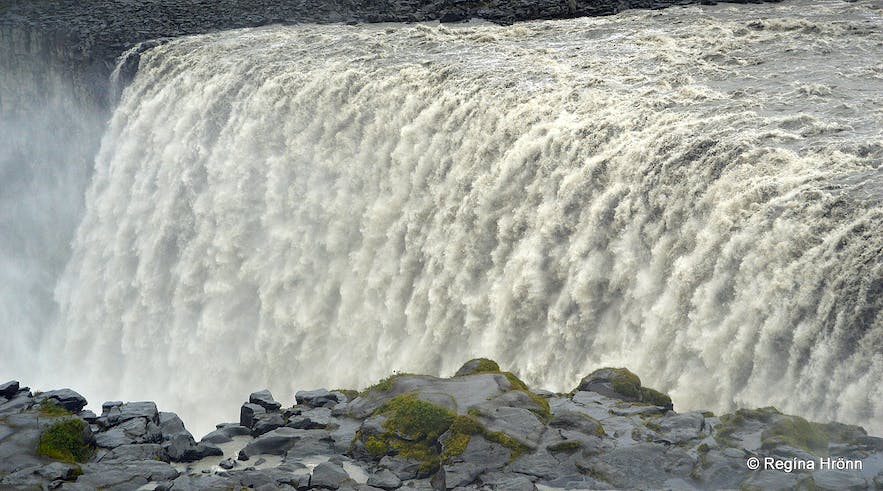 Now let's visit Dettifoss waterfall. Dettifoss is Iceland's most powerful waterfall and it has got the wow factor big time. It is 44 meters high and 100 meters wide and has a flow of 193 m3/s. 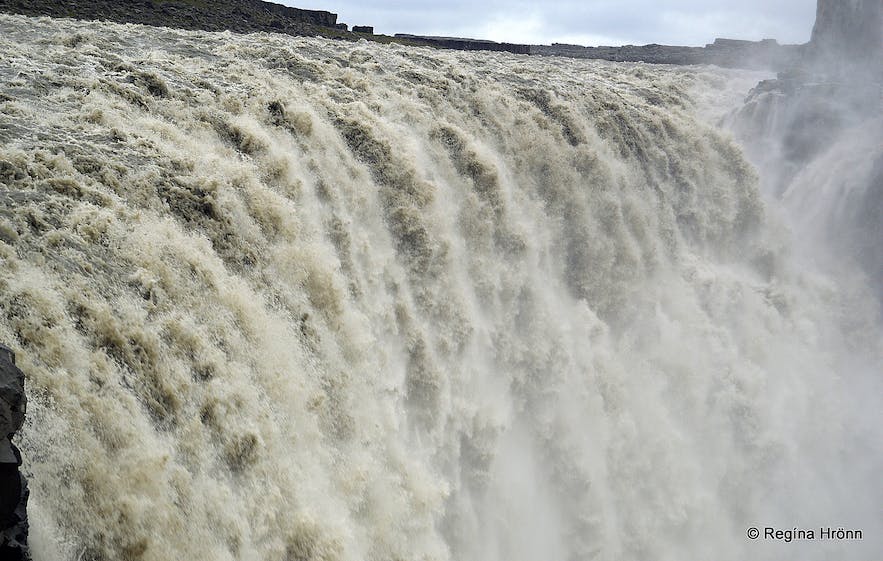 It is awesome standing close to Dettifoss.  When I visit it I am always in awe of how powerful it really is. I get a feeling of unreality standing so close to such forces of nature.

There is a lot of mist on the west bank so one is bound to get wet when standing so close to this powerful waterfall. 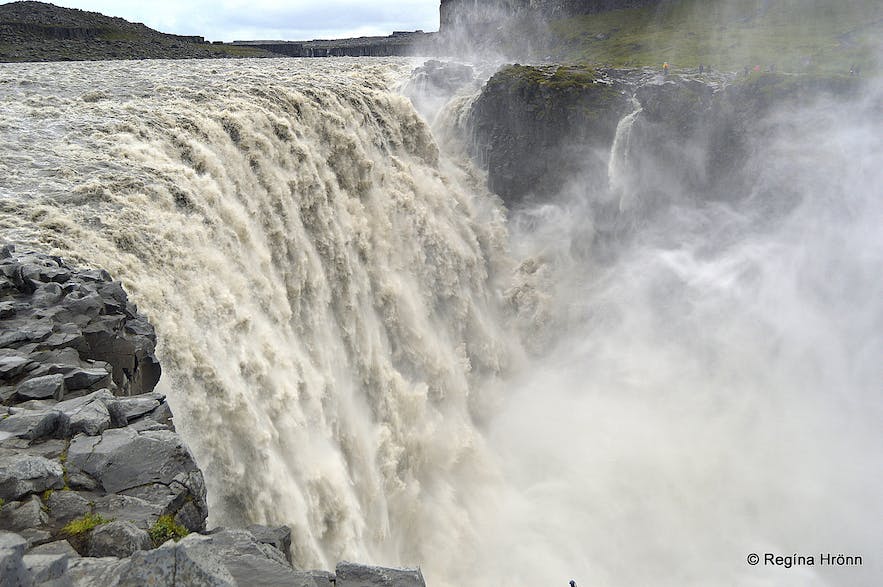 We also visited Dettifoss from the east bank. There you can stand even closer to the mammoth roaring falls. There are no guardrails here, so let's be very careful here.

Here is a short video of Dettifoss I shot from the east bank just so that you can hear it roaring and see the massive mist: 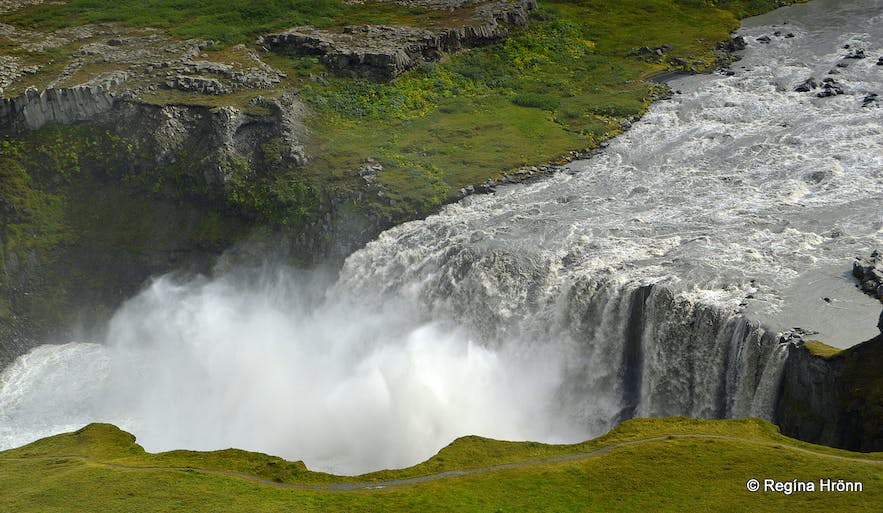 Hafragilsfoss from the west bank

This part of the canyon is called Hafragilsundirlendi and it is so beautiful. There are several freshwater springs here creating lovely small waterfalls that run into the glacial river. 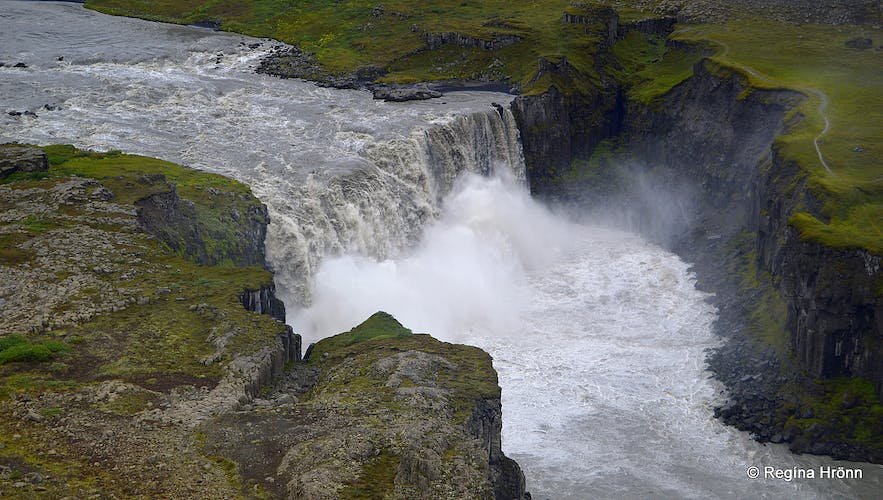 Hafragilsfoss from the east bank

And where the freshwater meets the ice-cold grey glacial water the most beautiful aquamarine colour appears.

The photo above is from the east side. I took a video of Hafragilsfoss waterfall from the west side:

The giantess had to act swiftly and tied the bucks together by their horns, threw them up on her shoulder, and jumped over the glacial river on this spot. 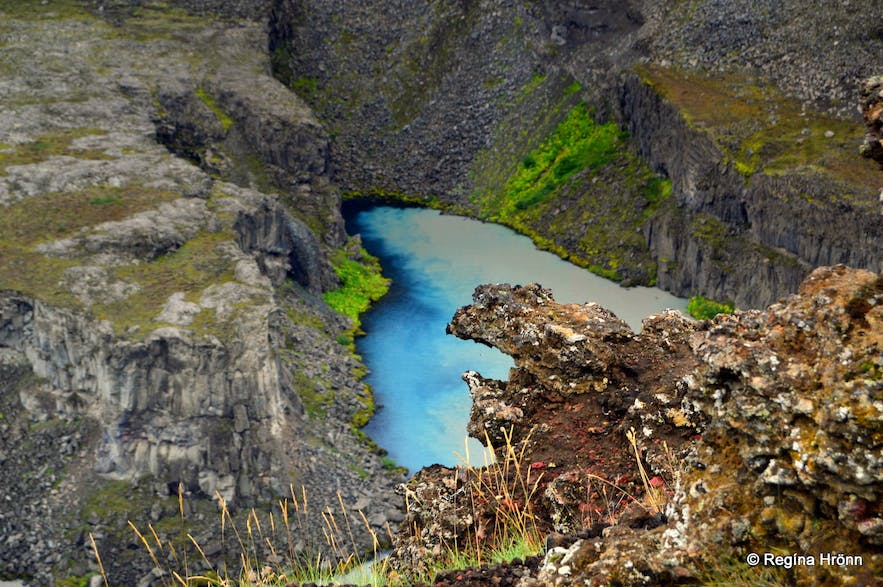 Hafragilsundirlendi from the east bank

I visited the east-bank on my own but joined a guided tour by Saga Travel with a stop on the west bank.

The tour is called Diamond Circle Tour in North Iceland from Reykjavik with Flight and I have written about it in my travel-blog the Spectacular Diamond Circle in North-Iceland. 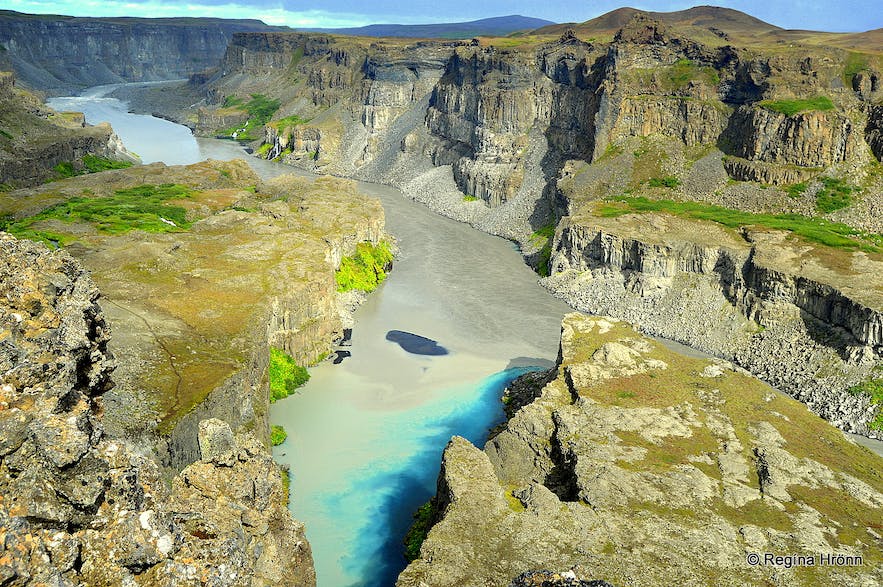 Hafragilsundirlendi from the west bank

Hafragilsfoss waterfall has got a huge mist/spray and I sometimes refer to it as mini-Dettifoss :) From both the west-bank and the east-bank you will have a great view of the Jökulsárgljúfur canyon and the glacial river Jökulsá á Fjöllum.

From the west-bank, you have a fantastic view of what I like to call an elf-church. Don't you agree with me on this - doesn't the basalt-column rock in my photo below looks just like an elf-church should look like? 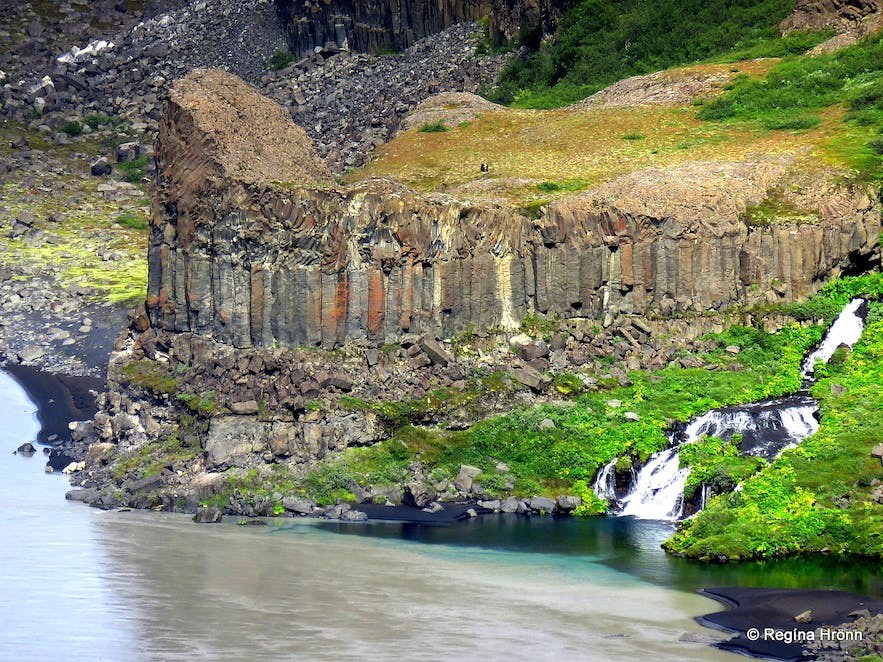 Photo shot from the west bank

We have got many stories of encounters with the elves - hidden people - of Iceland and many people have seen them enter rocks that might have been their churches. I have not been able to find any folklore on the elves for this particular rock, but would like to believe that one exists :) 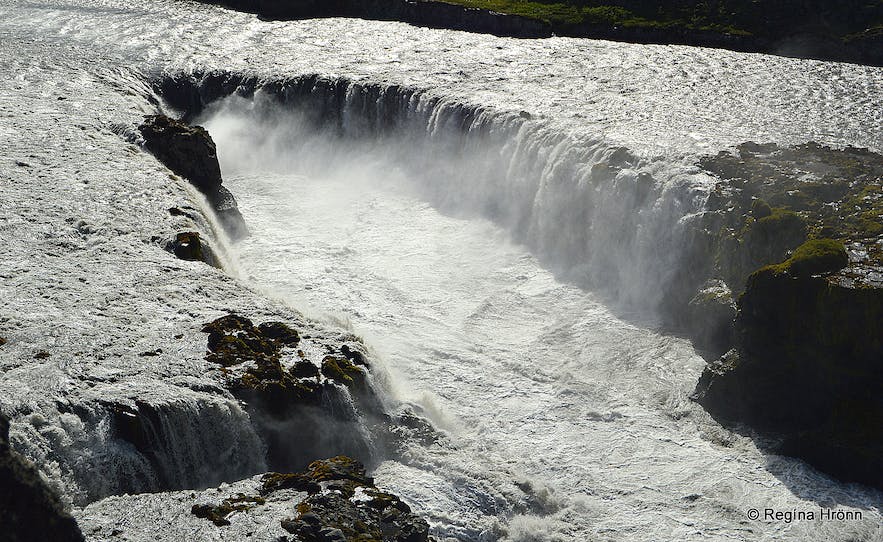 Another beautiful location in Jökulsárgljúfur canyon is Forvöð and Réttarfoss waterfall where you can reach the waterfall from the east side.

By Forvöð in Jökulsárgljúfur canyon, there is an hour's hike down to a horseshoe-shaped waterfall called Réttarfoss waterfall. This is a very interesting hike with lots of beautiful, historical sights, f.ex. one of the Grettisbæli - the Lair of Grettir the Strong - is to be found at Forvöð. 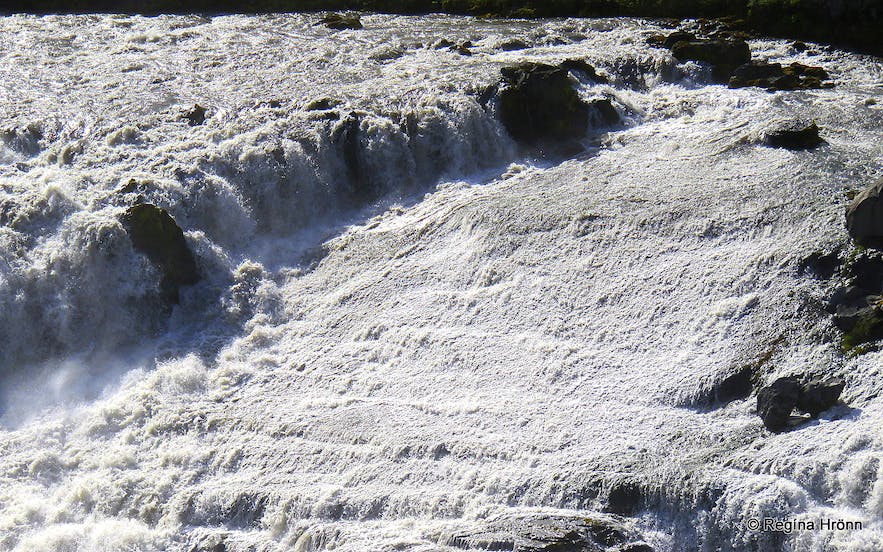 You can also visit Hólmatungur from the west side which is a breathtaking area, which has become one of my favourite areas in Iceland.

From there you can hike up the small mountain Ytra-Þórunnarfjall and see Réttarfoss waterfall from above. 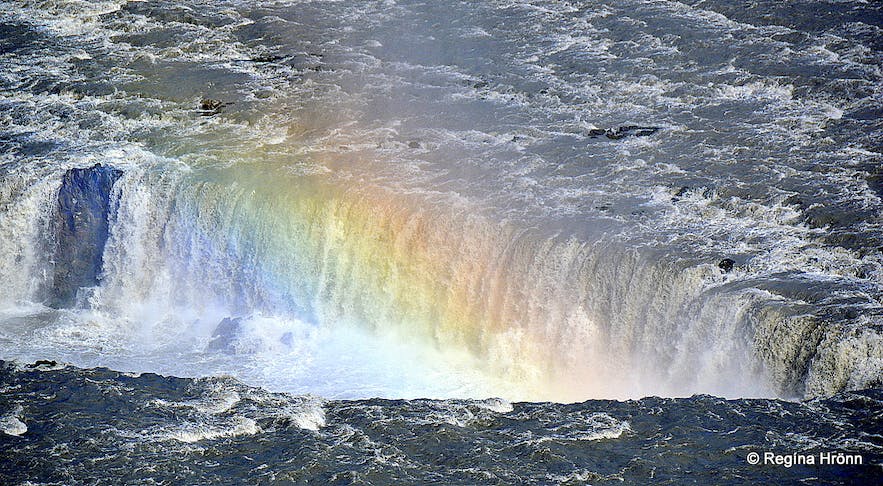 Réttarfoss waterfall from the west bank

The hike starts from the parking lot at Hólmatungur and is relatively easy, a path will take you up the small mountain and then you walk on the edge of the canyon. It is well worth including it in your visit to Hólmatungur. 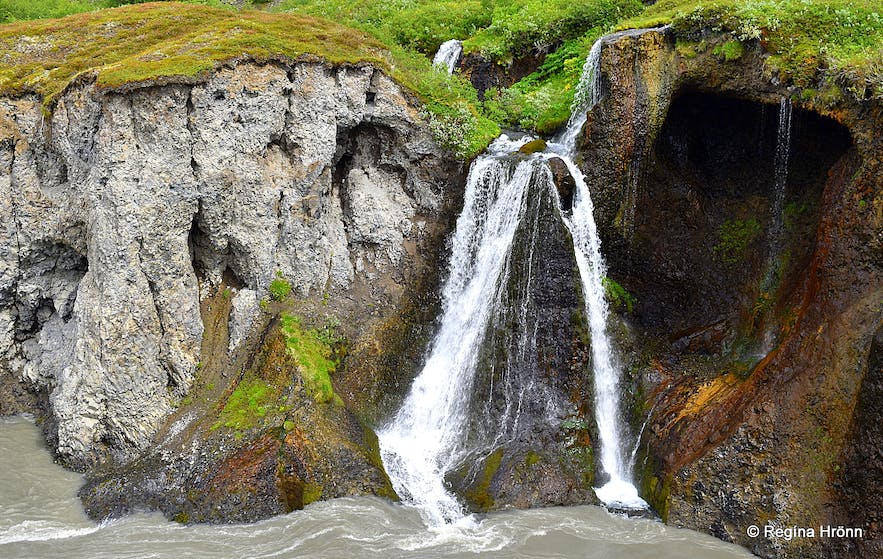 A nameless waterfall in Hólmatungur merges with Jökulsá á Fjöllum

This is just a short preview about the beautiful Hólmatungur, but I will write about them in another travel-blog. This area is so breathtaking, that I think it deserves a special travel-blog.

Above is one of the pretty sights by Jökulsá á Fjöllum, but many small rivers and creeks cascade beautifully into Jökulsá á Fjöllum and add to the volume of this massive glacial river. This waterfall can be seen from Katlar in Hólmatungur.

My husband took this video of the spot where the massive Vígabjargsfoss waterfall used to cascade from the cliffs.

Jökulsá á Fjöllum glacial river ran in 2 river beds and in 1920 it started running into the west river bed solely with great force, but that river bed used to be the smaller one of the two branches of the glacial river.

Thus it stopped running into the east river bed where it had created the massive Vígabergsfoss/Vígabjargsfoss. The only water that is left in that spot is the clear surface water from a creek coming from below Réttarbjarg. (Ref. Jökulsárgljúfur by Sigrún Helgadóttir).

A lovely hike, which has now become my favourite hike in Iceland, takes you from Hólmatungur to Hólmárfossar waterfalls, which cascade beautifully into Jökulsá á Fjöllum glacial river.

You can either hike by the edge of the Jökulsárgljúfur canyon or by a beautiful river further up. I love that hike and the photo of me surrounded by purple flowers is taken on that hike. The path actually leads through the flowers :)

I took many videos of Hólmárfossar waterfalls, they just took my breath away :)

The video is taken from the north side of Hólmárfossar waterfalls and if you walk further on by the river Stallar, which is also a beautiful hike, you reach a ford in the river where the hike continues up on top of the Jökulsárgljúfur I canyon and further on to Hljóðaklettar.

I passed the ford as I wanted to see where the river Stallar merged with Jökulsá á Fjöllum. I took a video on that spot:

Here Jökulsá á Fjöllum is getting increasingly more forceful with all the smaller rivers merging with it.

There are many other smaller waterfalls running into Jökulsá á Fjöllum glacial river before the river reaches the fairytale-like part of the Jökulsárgljúfur canyon called Hljóðaklettar or Echo Rocks. 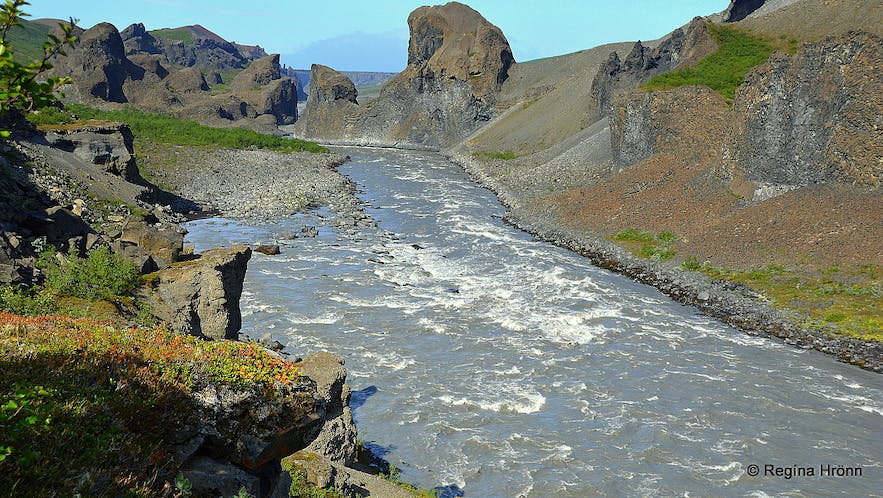 Hljóðaklettar is a cluster of strange columnar rock formations creating all kinds of figures. It is like entering another world, in my opinion.

These extraordinary rock formations, some of them standing in the middle of Jökulsá á Fjöllum glacial river, are the remains of volcanoes that have been eroded for centuries after centuries by the strong currents and floods of the river. 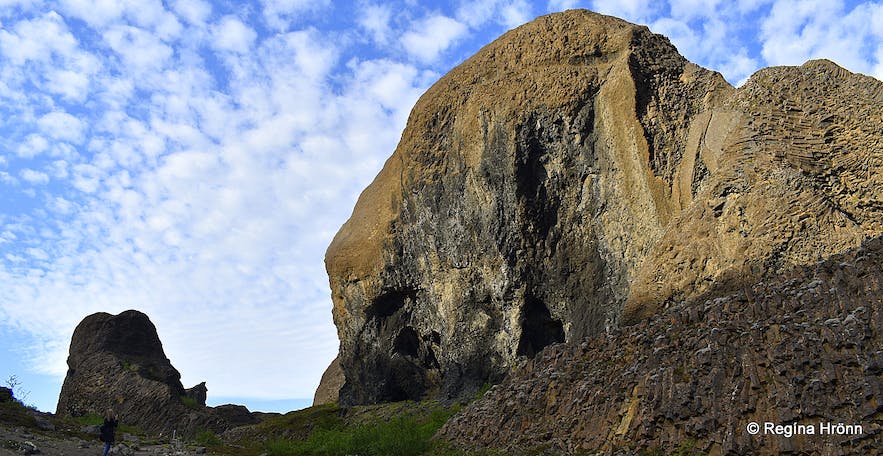 Skuggi - the Shadow in Hljóðaklettar

There are several breathtaking hikes in Hljóðaklettar, one of which takes you on a hike amongst amazing basalt column formations and to the massive cave called the Church.

I will only show you a few photos from this ruggedly beautiful place, as my travel-blog is about the glacial river Jökulsá á Fjöllum which runs in the canyon and passes Hljóðaklettar.

One of the hikes takes you down to the glacial river where you can pay a visit to Karl and Kerling, the two trolls who were out partying and didn't reach their cave in time.

But as we all know then the night-trolls (nátttröll) cannot tolerate daylight and are turned into stone if they see the first rays of the sun. 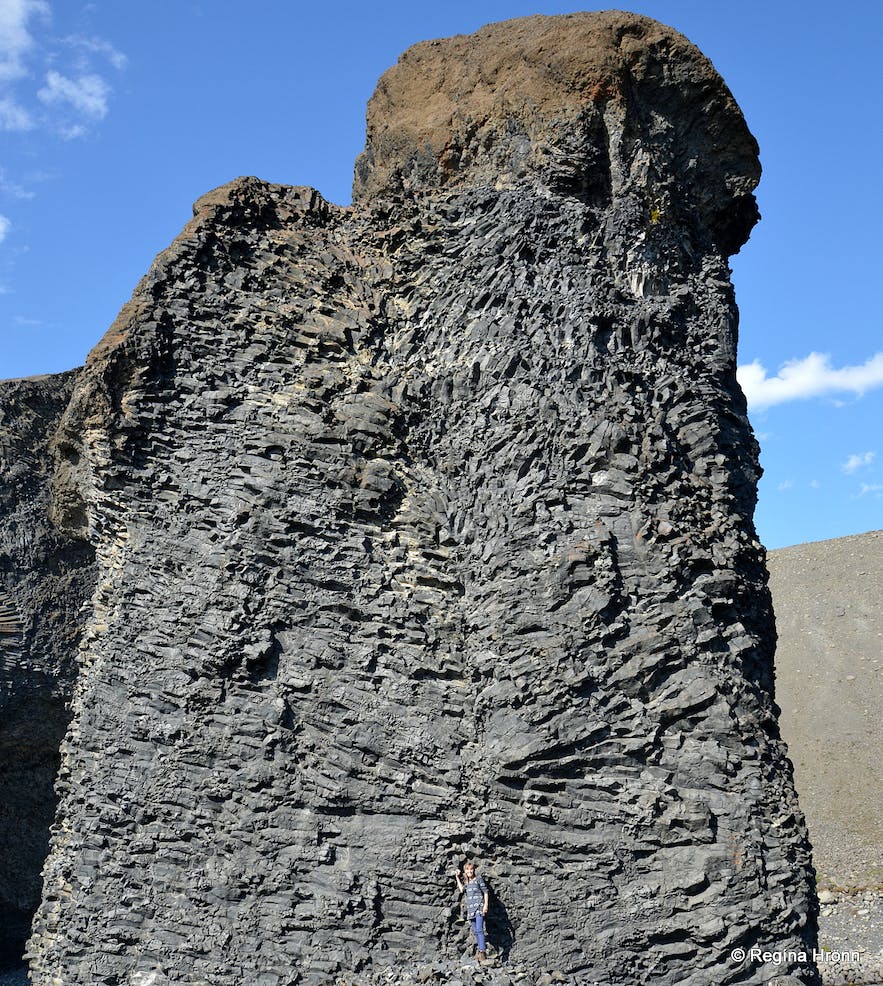 It is well worth visiting the trolls if only to stand next to the massive glacial river Jökulsá á Fjöllum. 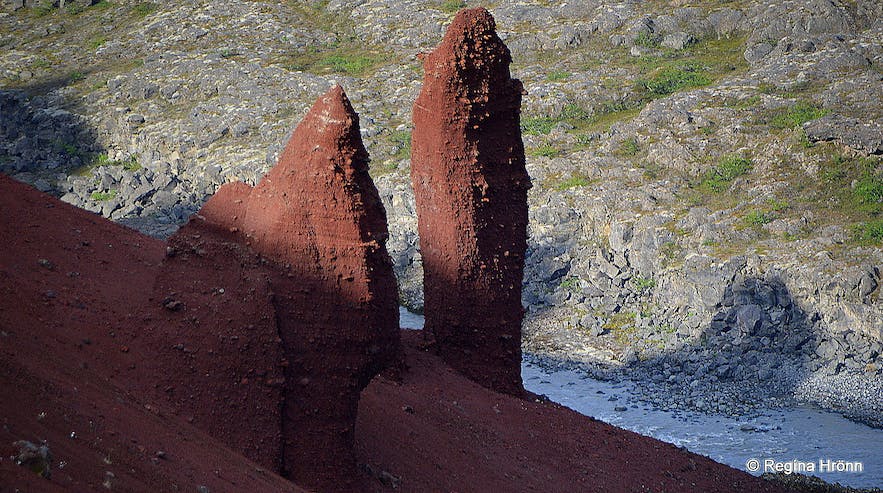 By Rauðhólar - the Red Hills by Jökulsá á Fjöllum

You can also hike to Rauðhólar if you have enough time to spare here at Hljóðaklettar. That hike will take you a bit further than Hljóðaklettar and it is a must in my opinion.

At Rauðhólar you will f.ex. see these two red pillars, which I find amazing. They look like they are from another planet. 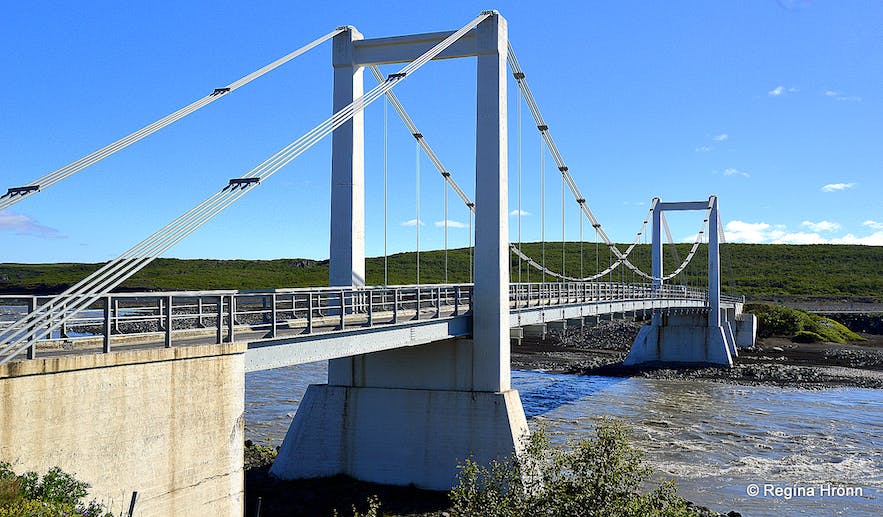 The bridge across Jökulsá á Fjöllum on road 85

There you will find another bridge across Jökulsá á Fjöllum on road 85. It was made in 1957.

In my photo above you will see the last part of the river Jökulsá á Fjöllum as it runs its course north into the sea. 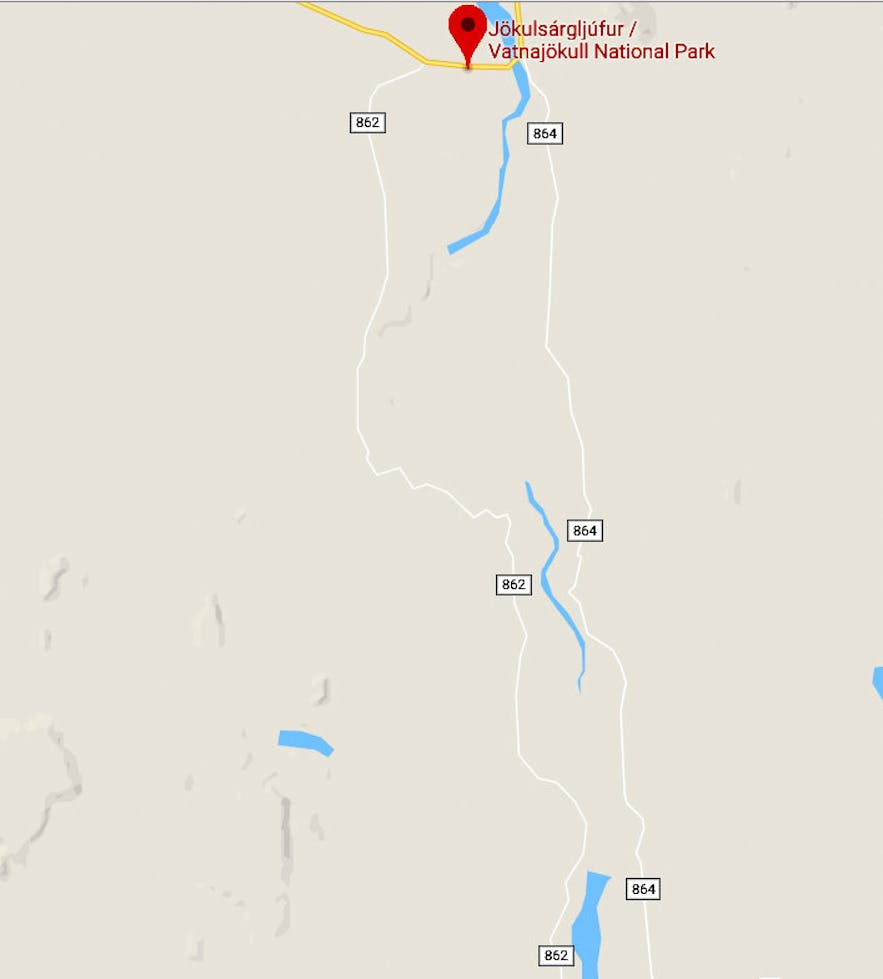 Road 862 on the west bank is now paved all the way. It used to be paved to Dettifoss only, but in the summer and autumn of 2020, the bad gravel was finally paved, all the way down to road 85.

This is a summer visit only unless you join a guided tour.

Have a lovely time in the magnificent Jökulsárgljúfur canyon :)