The majestic Þverá Turf House in North-Iceland - closed to Visitors

During my search for the remaining turf houses in Iceland, I visited the beautiful Laxárdalur valley in North-Iceland. In that valley, Þverá turf houses are located. It is a large, exceptionally well made, traditional Icelandic turf house (turf houses) with outbuildings. Here the most comprehensive habitation remains in Iceland can be seen.

I love this beautiful turf house - it is my husband's old family manor, i.e. his ancestors lived here and his great aunts and uncles on his father's side were born here. One of my husband's relatives, Áskell Jónasson, lives next to the farm, in a house built in 1964. That relative was brought up on the turf farm and he took us on the grand tour of Þverá turf house. Þverá turf houses are under repair and are closed to visitors though.

Almost all of Iceland's remaining turf houses now belong to our National Museum Þjóðminjasafn Íslands and are a part of the National Museum's Historic Buildings Collection.

Þverá turf farm has belonged to the museum since 1968 and it was preserved in 1990. 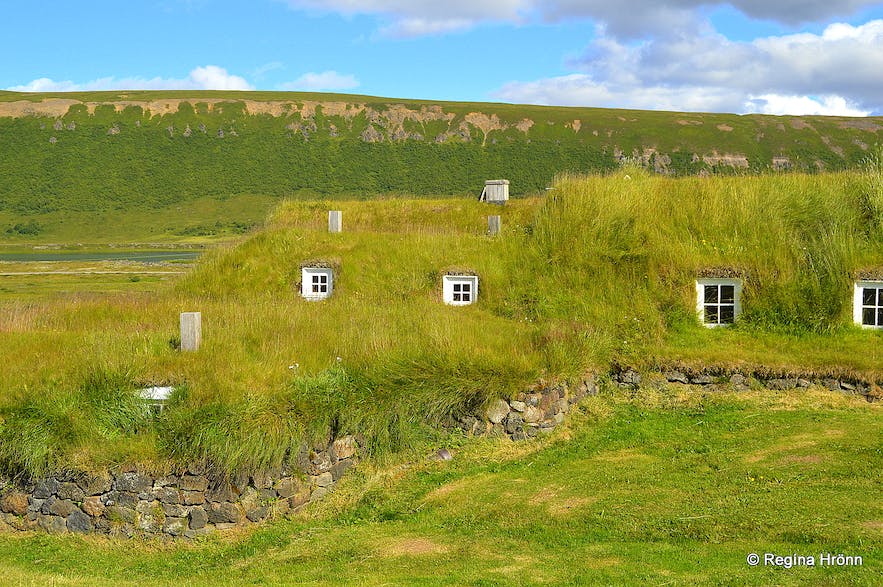 These beautiful turf houses at Þverá  (9 in all) date back to the 19th century and were built in 1849-1851. People lived on the turf farm until 1964. Times have changed for sure, as once upon a time, everybody in Iceland lived in turf houses, rich and poor alike.

Seeing that in this area there is a lot of lava then these turf houses are mainly built with lava rocks much like my old family turf house at Grenjaðarstaður, which is very close to Þverá turf house. The roofs of the turf house are insulated with dwarf-birch and covered with turf. I want to show you what Þverá turf house looks like on the inside, as I got this rare opportunity to be guided through this large turf house, and Áskell told us about what it was like growing up here as a boy. Inside I saw an old hearth kitchen and a pantry, 2 living rooms, a sitting room, and many other rooms, including the cowshed.

A creek was channelled through one of the rooms, giving the inhabitants access to water all year round - an interior well, very clever. This area was also used as a cold store. 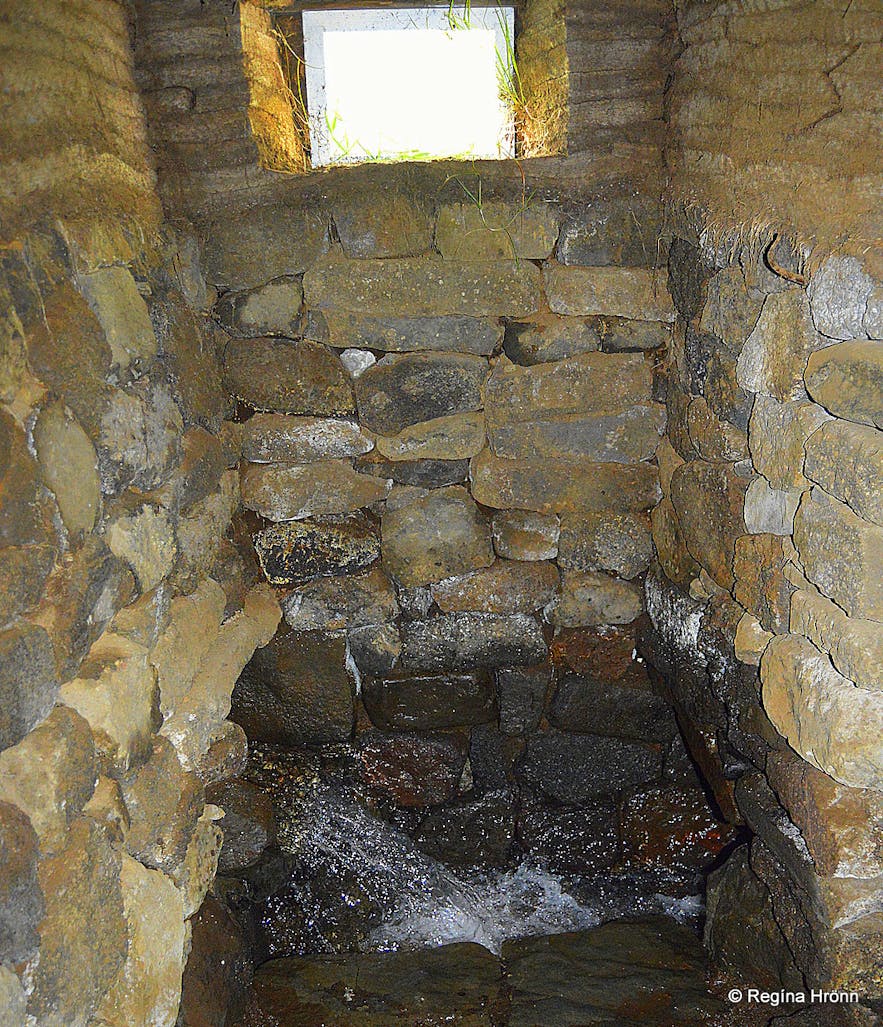 Upstairs the bedrooms are located - called "baðstofa" in Icelandic. In the baðstofa area, people would sleep, eat, and work.

In the photo below you see the bed where many of my husband's relatives were born and then slept in the crib to the left in the photo. Jón J. Víðis (see later in my travel-blog) was born here and Áskell. A passageway took us from room to room - I had to mind my head as people were smaller in the olden days - and I managed to bang my head once again! And I am not very tall.

In this old turf farm, the oldest cooperative in Iceland was founded "Kaupfélag Þingeyinga" in 1882. During one of our visits to Þverá, we were lucky enough to be invited for coffee at Áskell's home with Helgi Sigurðsson and his coworkers at Fornverk. Seeing that I am such a fan of turf houses, we had a lot to talk about and Helgi told me about some locations of interesting turf outhouses that I hadn't known about.

There are other outhouses; the two connected outhouses for lambs called Lambhúsin. They were rebuilt in 1995-1997 and are so pretty in my opinion. Fornverk has also built a car park with a stone wall.

I just love visiting Þverá, there is something so magical about this place; like you have stepped back in time. Don't you agree with me? I had some photos taken of me while wearing my national costume to make the photos look more "authentic" as it were :) I was wearing the national costume on the occasion of the 140th anniversary of Þverárkirkja church. 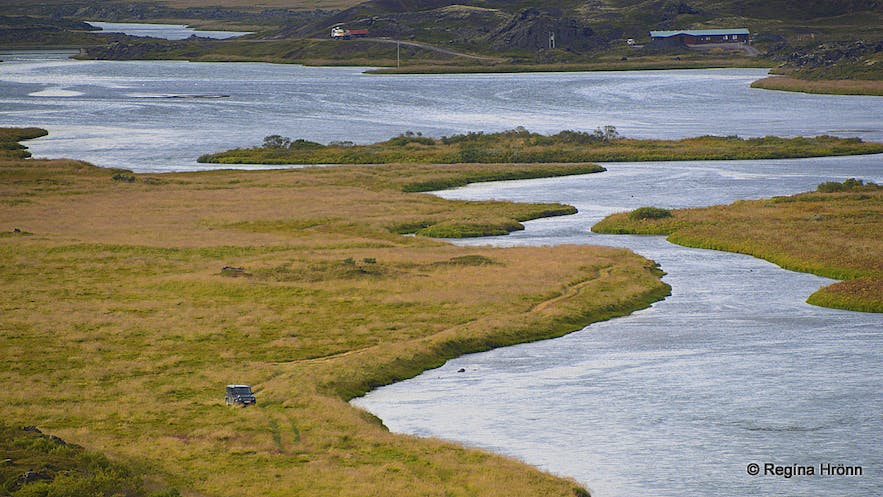 The surroundings in Laxárdalur valley are ever so beautiful. One of the best-known salmon fishing rivers in Iceland, Laxá, runs through the valley. Þverá turf house is on the edge of Aðaldalshraun lava fields, where the lava takes on all kinds of form. The church at Þverá is an Annex church of the benefice at Grenjaðarstaður. The current stone church was built in 1878, but there were older churches on this spot, dating way back to the middle ages. The minister at Grenjaðarstaður, Benedikt Kristjánsson, my great-great-grandfather, consecrated the church back then.

On the 19th of August 2018, I attended the 140th anniversary of Þverárkirkja church and at the same time Áskell the owner of the church, handed the church over the Þjóðminjasafnið - our National Museum. This was a big event and 3 ministers attended and some 140 guests visited Þverá on this occasion. 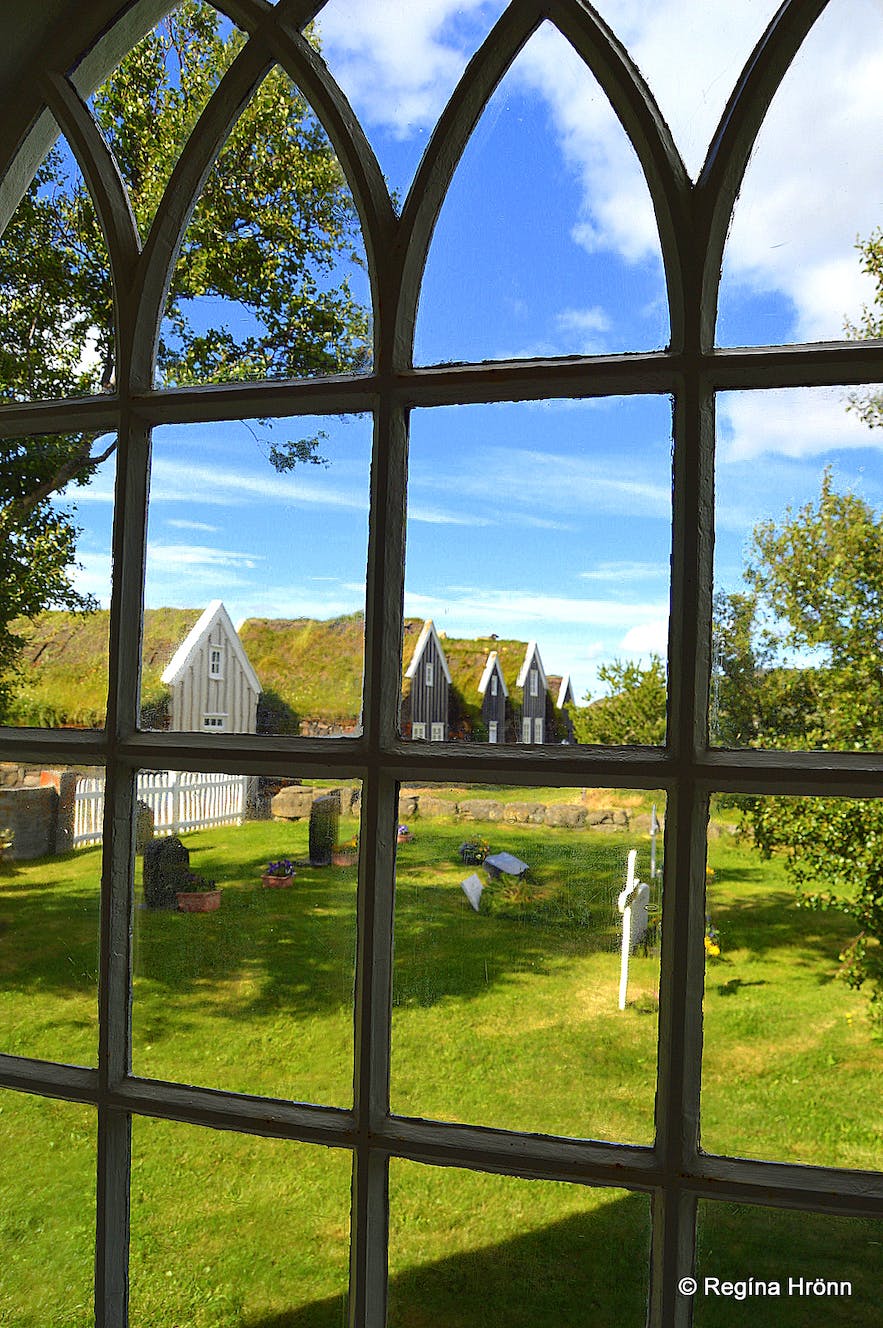 Once when visiting the church, I noticed that a sheep was walking on the roof of the turf farm - happily eating the grass turf on the roof.  As soon as it noticed the farmer Áskell though, it got spooked and ran away - I guess it must have done this before and known that it is not allowed ;) 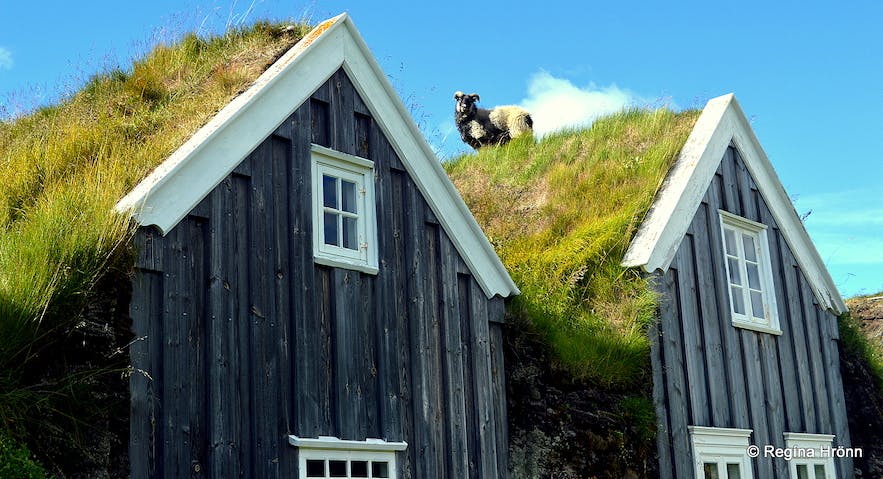 Turf houses have grass roofs and have to be moved or cut on a regular basis. When visiting the remaining turf houses you will see that the roofs vary and some are really "hairy" and have all kinds of flowers and weed growing on them - the turf houses are alive and need regular upkeep, which is costly.

They are our inheritance from generations past and I am glad that the National Museum is doing its best to maintain them :)

Jon J. Vidis and the Memorial in Laxárdalur 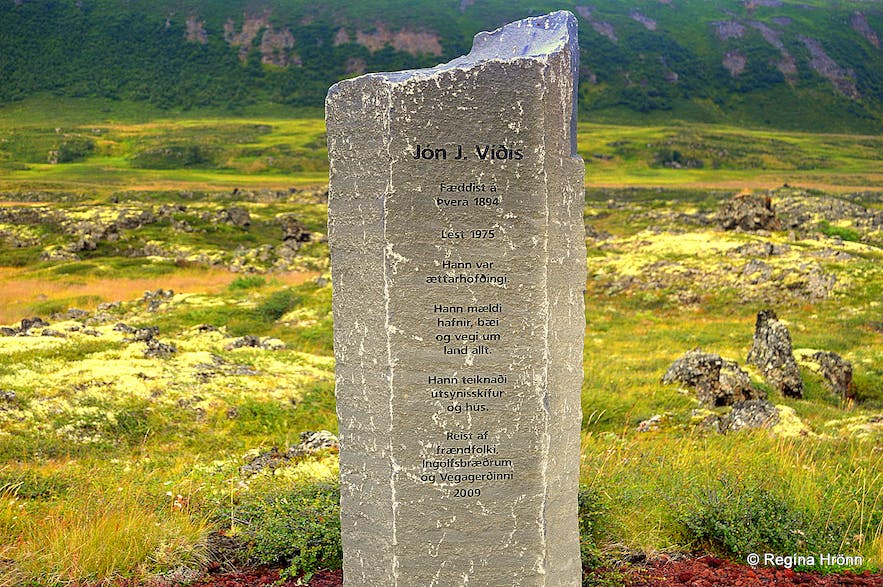 In the lovely Laxárdalur valley, just beneath the turf farm at Þverá, a basalt column stands six feet high. It was erected in 2009, in the memory of Jón J. Víðis, born in 1894 at Þverá. The monument is named Jónssteinn (a Stone for Jón).

Jón J. Víðis was, by his family, referred to as the head of the Víðis family. Jón never married and had no descendants, but supported the family in many ways, and as a result, thereof, is well respected by family members.

The memorial was erected by two more supporters; the Icelandic Road and Coastal Administration and the Independent Order of Odd Fellows (IOOF). Jón was a surveyor of towns, harbours and roads, all around Iceland, for decades, and an influential member of the IOOF. He was respected, loved, and admired by all, as a hard-working, generous, sociable, intelligent, and influential person.

Jón's very detailed maps of harbours, in the scale of 1:500, are still in use when other maps don't suffice. In the sixties, Jón surveyed roads in the Westfjords of Iceland, which proved to be a turning point in road construction in this country.

He was a forward-thinking man, and his roads were 8 meters wide at that time and were laid in beautiful curves through the land and over the heaths. Jón also designed houses, photographed, and designed many view-dials, distributed all over the country.

As a surveyor, you need two assistants. During his long period of employment, Jón needed many assistants, who were mainly students, much appreciating a well-paid summer job, travelling all around the country. Many of these were Jón's nephews and great-nephews, including my father-in-law, Jakob Hálfdanarson, who took over Jón's project of designing view-dials.

Being married into the family, I frequently hear these men talk about these adventurous times. My husband is named after Jón Víðis - his name is Jón Víðis Jakobsson. Jón and three companions were the first ones to travel in a car across Sprengisandur, the centre of the Icelandic highlands. They drove in their open Ford T model of 1926, from the agricultural areas in the south to the north coast, in a few days, in 1933. This was and still is, considered an important and courageous exploration, in the early days of modern travelling.

You can see Jón's old photos from that exploration in the latter part of my travel-blog the extraordinary Aldeyjarfoss Waterfall in North-Iceland in beautiful Basalt Column Settings.

Jón J. Víðis died in 1975. The family name Víðis was taken from a little island in the river Laxá, where it runs by Þverá, close to the monument, with the name Víðir. Víðir is the Icelandic name for willow (Salix), a tree found in several different varieties in Iceland. Víðir may also refer to the island as being well-grown.

(I got help from Már Viðar Másson in creating this tip, but Jón J. Víðis was his great uncle. Már has created a very good home-page Mar Vidar from where I got good information on this area). 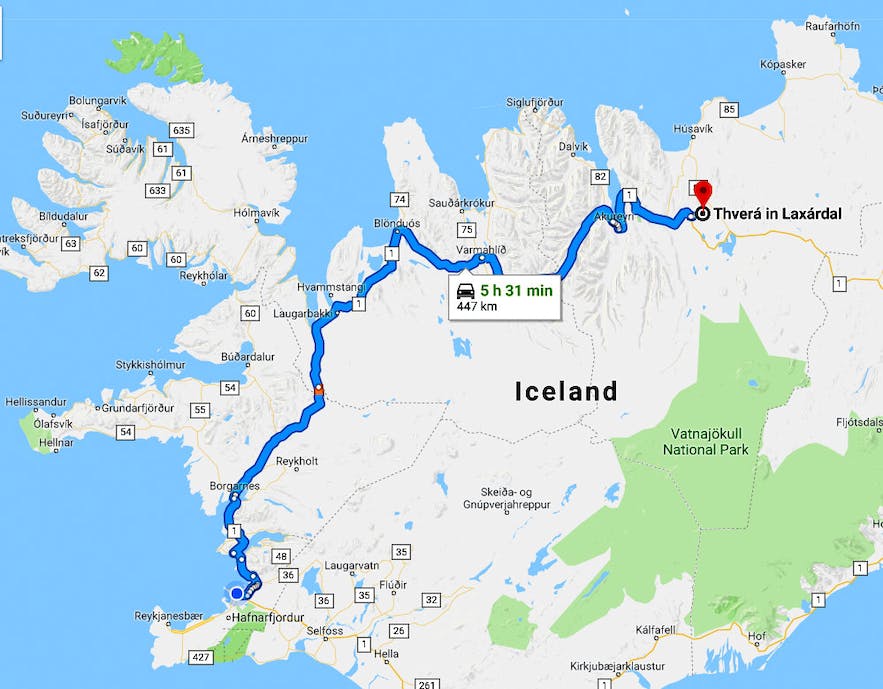 Þverá in Laxárdalur valley is kind of off the beaten path, but it is so worth the while taking the detour into this beautiful valley. Þverá turf house is closed to the public while it is under repair, but you can have a look at it from the outside.

I have been visiting and writing about all of the remaining turf houses and turf churches in Iceland in other travel-blogs, f.ex:

And I recently wrote a travel-blog about all the turf houses in Iceland which I have visited on my travels around my country. To visit this area you can rent a car in Reykjavík and take a trip up north.

As you can see from the Google map and the information I put in this travel-blog then Þverá is closed to visitors. There are other turf houses you can visit instead like Grenjaðarstaður turf house.