In this series of travel-blogs, I will be showing you places of interest in the northern part of the Westfjords of Iceland. In another series, I have shown you interesting places in the southern part and the Strandir area of the Westfjords. My first stop is at the beautiful Vatnsfjörður fjord.

Vatnsfjörður is an interesting fjord overlooked by many visitors to the Westfjords of Iceland. Here you will find Viking ruins, the huge Grettisvarða - the Cairn of Grettir the Strong, and one of the few remaining turf structures in Iceland. 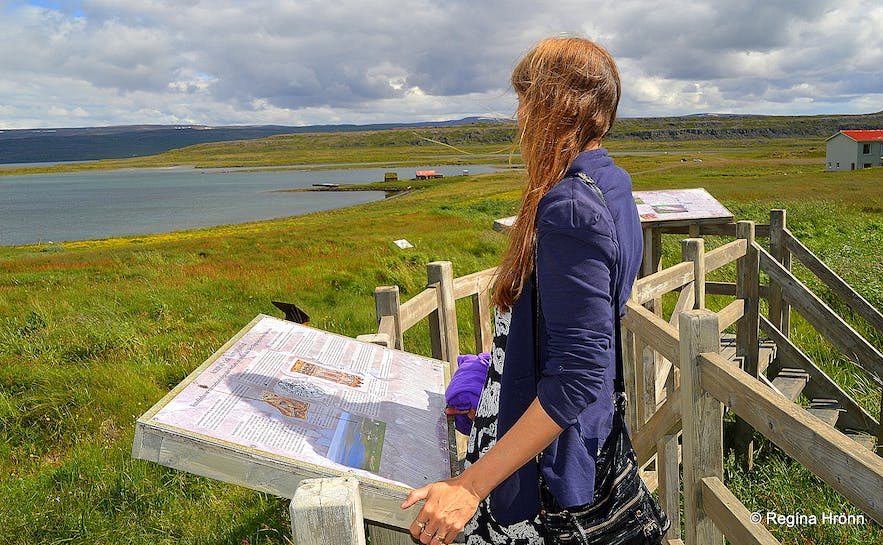 In Vatnsfjörður extensive ruins of a Viking estate ruins have been discovered. The Viking Snæbjörn, the son of Eyvindur austmann, settled this land.

Here in Vatnsfjörður fjord one of the wealthiest manors in Iceland in the 12th - 17th century could be found, and many known characters from Iceland's history lived at this location. Here was the main hub for Vatnsfirðingar (The People of Vatnsfjörður), but they were one of the most powerful Viking clans back in the Saga age.

Overlooking the archaeological site in Vatnsfjörður - as seen from Grettisvarða cairn

During archaeological excavations from 2003-2013, ruins of a Viking longhouse from the 10th century were discovered.

A smithy and several other smaller houses were also discovered, making this a large archaeological site. I always find it interesting wandering around in archaeological sites thinking about what life must have been like for the generations past here in Iceland. And wondering how many more objects there lie hidden from sight in the ground.

Standing inside the Viking longhouse

Several old objects were unearthed during the archaeological excavations, amongst them an exquisite gold pendant. There are speculations, that this gold pendant could have belonged to an Irish broach and been cut from that broach. You will see a photo of the gold pendant on the information signs.

Amongst other objects discovered was a water jug in the liking of a lion from the mainland of Europe.

This archaeological area is very well marked which makes it an interesting place to visit. Kudos to them for a job well done! 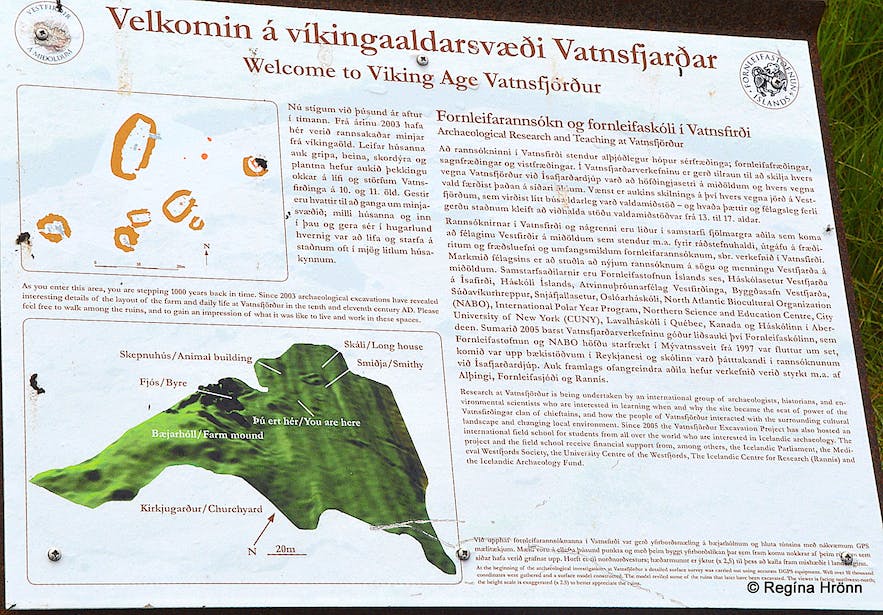 This is a travel-blog about my visit to Vatnsfjörður, but if you want to read up on this archaeological site, then a comprehensive report has been written in English about the excavation site.

The church and the circular graveyard

In the olden times, graveyards were circular and the churches were made of turf. At Vatnsnes you will see a circular graveyard. Churches would be inside this circular graveyard until the 20th century, but the stone church at Vatnsfjörður, Vatnsfjarðarkirkja,  stands outside this graveyard.

We had a look inside the Vatnsfjaðarkirkja church, but had to ask the farmer for the key, as most churches in Iceland are now closed due to vandalism :( I love visiting churches and I have by now, in 2020, visited 91.5% of Iceland's churches. Which means that I spend a lot of time during my travels in my country, on searching for the church-key, so I can have a look inside. 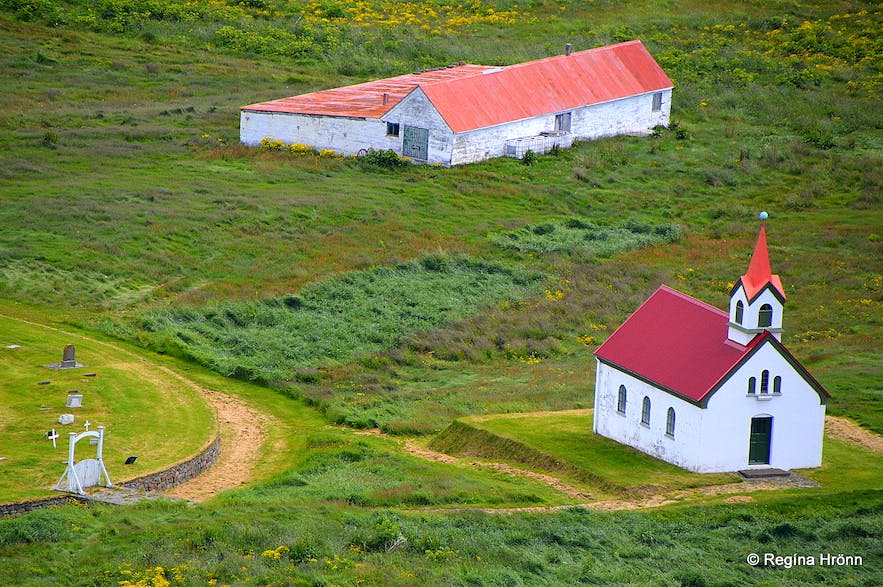 From the Reformation in 1550 a deanery was located here at Vatnsfjörður.

I have been doing this since 2008, but back then the Icelandic churches were open to visitors. But with increased travelling vandalism and disrespect has taken place inside our beautiful churches and people have even cooked food inside old timber churches! So it is getting increasingly more difficult for me to visit them. I wish people would show more respect inside our places of worship, so they could stay open.

The Vatnsfjarðarkirkja church dates back to 1911-1912 and the Danish altarpiece is from 1860. It shows the resurrection of Christ. Of interest inside the church is also a large crucifix. I love these churches, to me, they are a gem each and every one of them. 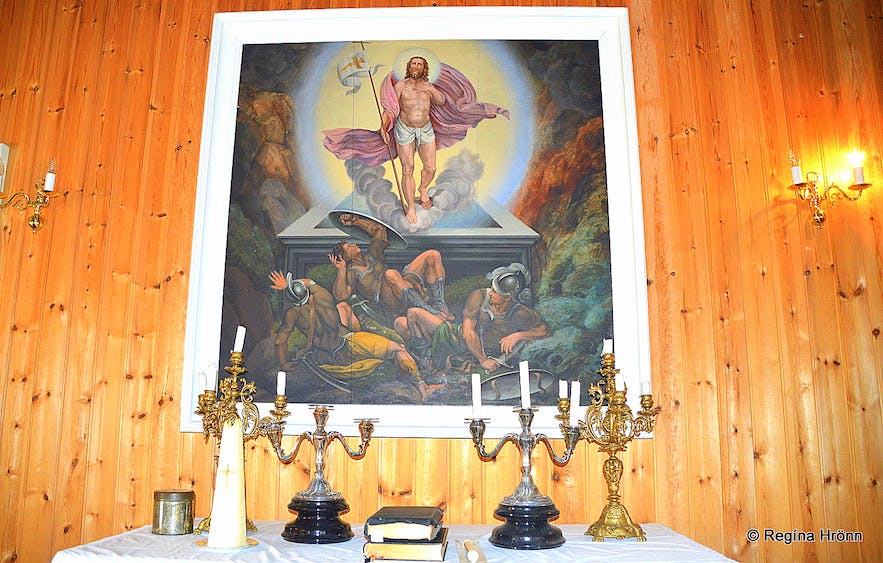 The altarpiece in Vatnsfjarðarkirkja church

Several old objects from Vatnsfjarðarkirkja church can be found in Þjóðminjasafnið - the National Museum of Iceland, which I recommend visiting during your Iceland visit.

Amongst them a wooden statue of St. Olav King of Norway dating back to 1500-1550. On the wing-doors are paintings of  St. Peter, St. Paul, Archangel Michael and Guðmundur góði - the Bishop Guðmundur the Good. You will find more information at Sarpur. 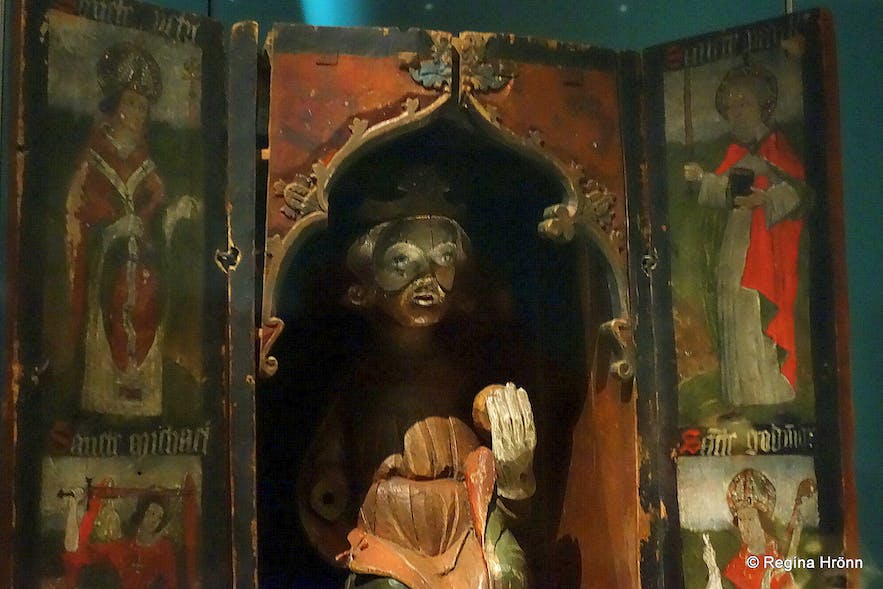 At the museum, you will find many objects discovered at archaeological sites and old artefacts from old churches, some of which date back to the 1200s. I visit the National Museum often and take photos of objects which are connected to my travel-blogs and add them to the travel-blogs in question. 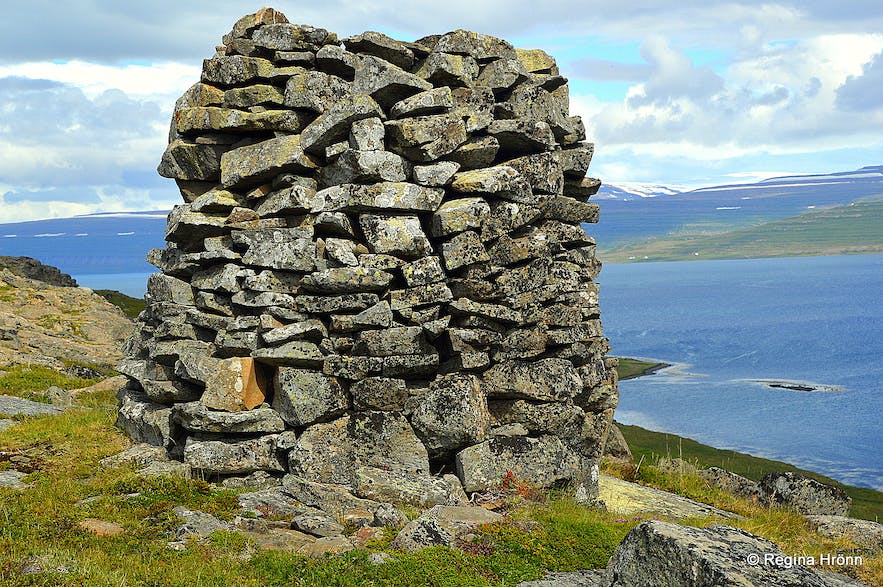 Above the Viking ruins in Vatnsfjörður an interesting cairn stands tall on Grettishjalli cliff - the Grettisvarða  cairn, which also reminds us of the olden times of Iceland.

Did the Viking outlaw, Grettir Ásmundarsonar, a.k.a Grettir, the Strong, build this cairn? It is so huge and massive, that who else but Grettir could have erected such a huge cairn?

This huge cairn could also have marked the way or it could have been a watch-tower, we don't know. It is hollow from the middle up, so maybe it was used to lit a fire to warn the neighbours of enemy-approach. But like those, who have read the old Viking Sagas know, then many of them tell us about battles and blood-revenge in detail. 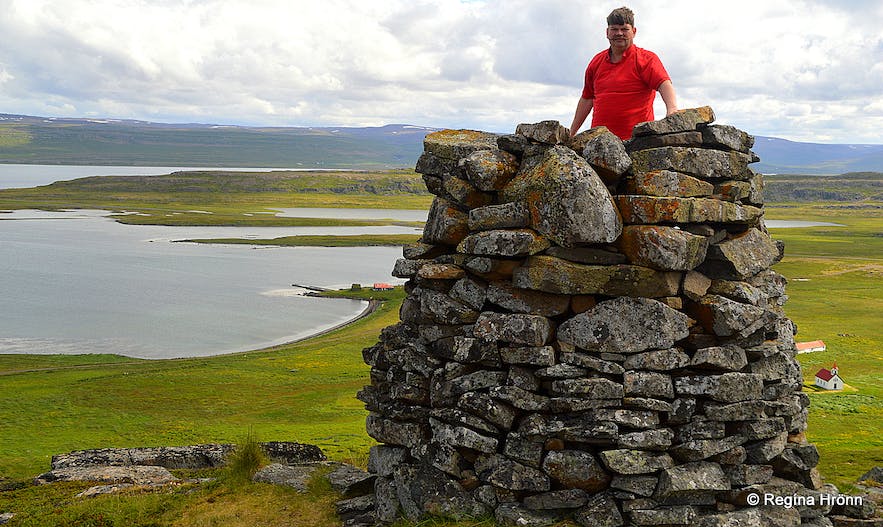 During his outlawry, Grettir (around 996-1040), the hero of the Saga of Grettir, stayed in Vatnsfjörður for some time.

Grettir was saved from hanging by Þorbjörg hin digra - Þorbjörg the portly, the lady of the Vatnsfjörður estate and the wife of Vermundur hinn mjóvi, after he had robbed the farmers and created havoc in this area. Nobody had wanted to take him in, and it was decided that he should hang.

Þorbjörg, who was on her way to hunt seals (of which there are plenty in this area, as you will see in my next travel-blogs) when she rode by the spot of the gallows at Grettistangi spit by Selvatn - the Lake of the Seals. 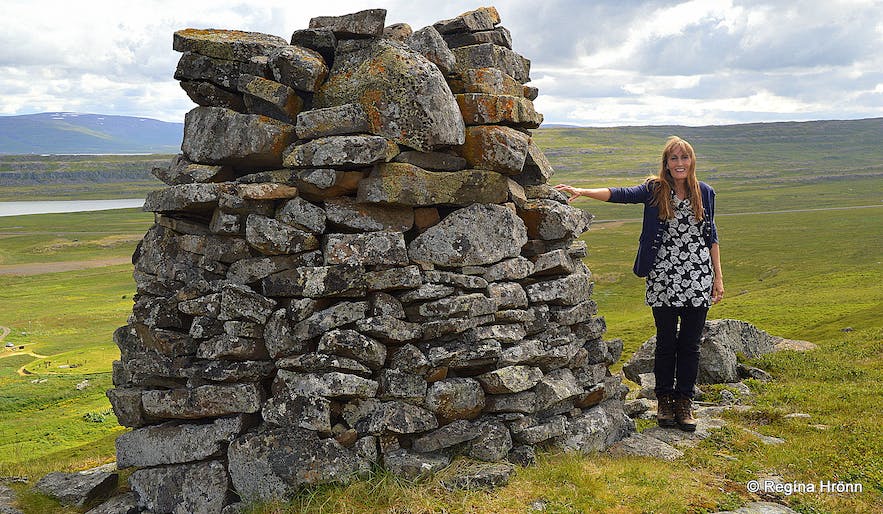 She asked Grettir to make a vow that he would not cause any more uproar in this area of Ísafjörður fjord and take no revenge on the men who had captured him. Þorbjörg then brought Grettir home with her to Vatnsfjörður, where he stayed for a while.

Grettir's outlawry lasted for almost 20 years, which was the maximum penalty for an outlaw. Sadly he was then killed with sorcery on Drangey bird-cliff. 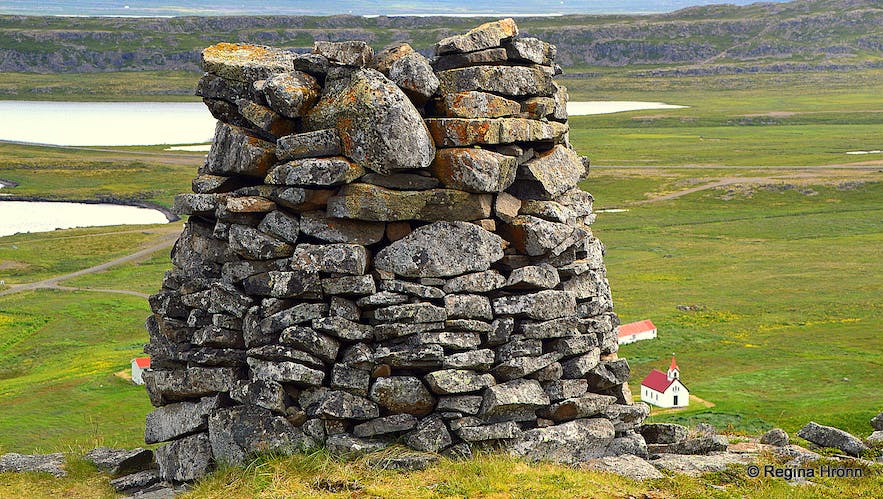 Ólafur pá was, in turn, the half-brother of Hallgerður langbrók, who was married to Gunnar at Hlíðarendi, one of the main characters of the Saga of Njáll. So you see how the Sagas intertwine. 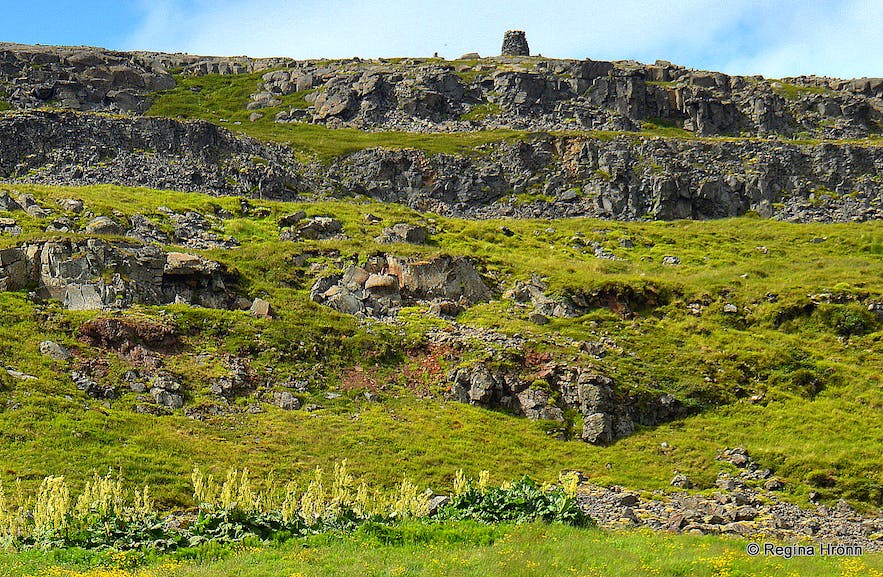 And neither should any of the old cairns which can be found in Iceland as you never know how old they are and they serve as an old GPS system of the old Iceland. And new ones should never be erected without permission.

Once up on top of the hill by Grettisvarða, you will be rewarded with a fantastic view of the bay. From the top, you will see the protected hovel with the turf roof and the Viking archaeological area. 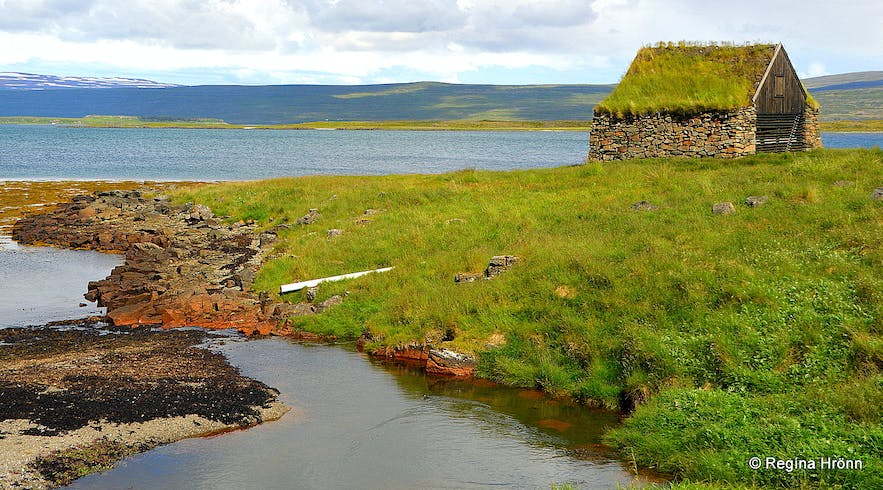 By the sea, you will find an old very picturesque turf fish-shed. This fish-shed belongs to the Historical Buildings Collection of Þjóðminjasafnið - the National Museum of Iceland.

The fish-shed Hjallur - the Hovel Hjallur dates back to around 1880 and the building material is timber, rocks, and turf. Hjallurinn was restored in 1976 and preserved that same year. 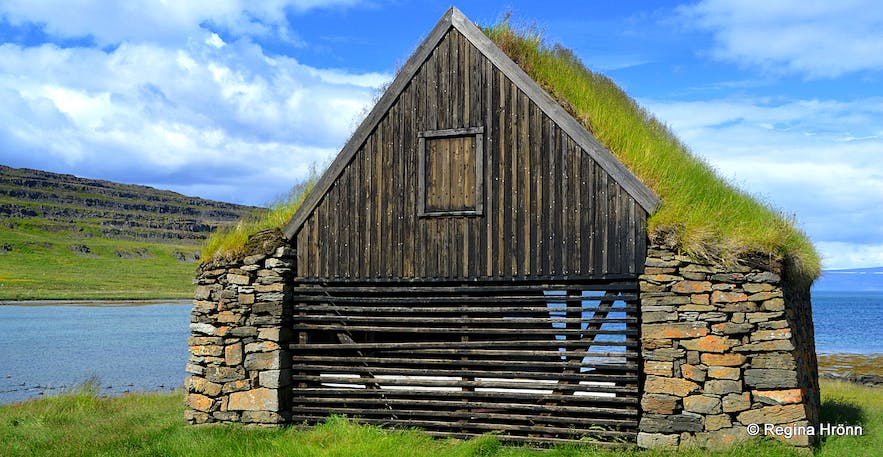 Ruins of many such old fish-sheds can be found in the Westfjords. They were mainly used for the drying fish and keeping fishing gear. I am so glad that Hjallur was preserved.

Hjallur is open to visitors from 8:00-18:00. Let's treat these old turf structures with the respect that they deserve, as as they are delicate gems, which we want to preserve for a long time. 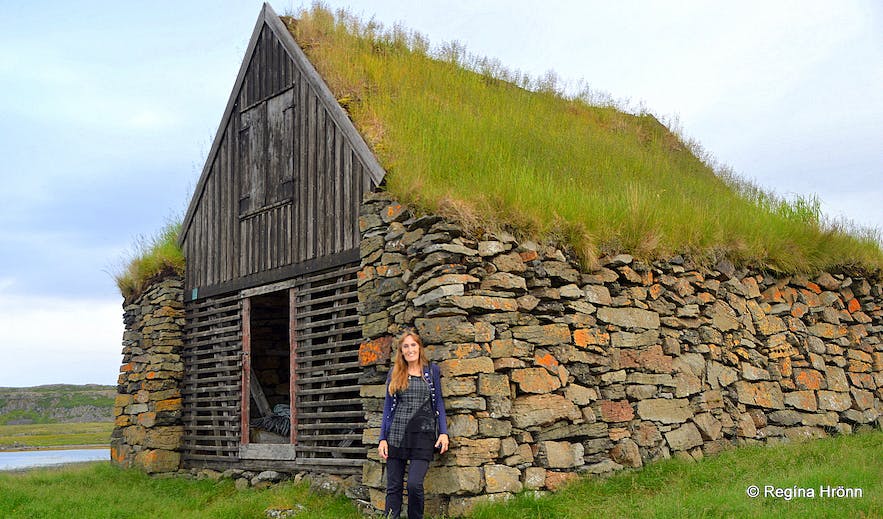 If you want to see photos and the locations of other turf structures in Iceland, then I have written a special travel-blog about all the turf houses, turf outhouses, and turf structures I have encountered on my travels in Iceland:

To reach this area you can rent a car in Reykjavík and go on an exploration of the beautiful Westfjords of Iceland. There are two Vatnsfjörður fjords in the Westfjords. This one is in the northern part, but other ruins, the ruins of Hrafna-Flóki, are located by Vatnsfjörður in the southern part of the Westfjords.

My next travel-blog in this series is: A lovely Visit to Reykjanes in the Westfjords of Iceland

Have a lovely time in the Westfjords of Iceland :)