The Snorralaug hot spring, located in the village of Reykholt, is thought to be the oldest geothermal pool used for bathing in all of Iceland.

Adventurous travelers can rent a car and drive to Reykholt for the day or book a stay at the Fosshotel Reykholt. If planning your trip seems too stressful, book a private tour to visit some of the best attractions in West Iceland, including Reykholt and the Snorralaug hot spring.

The hot spring is surrounded by a stone patio and a retainer wall that gives the geothermal pool its circular shape and unique rustic aesthetic. The small hill behind the hot spring features a wooden structure with a door that leads to a tunnel. Visitors can take beautiful photographs of the picturesque views surrounding the hot spring.

The site is open 24/7, but bathing in the pool has been forbidden since 1817, when it was officially protected as a heritage site. It's worth noting that the hot spring's temperature can vary hugely. It's often too hot to bathe in, so you won't miss out.

Although you can't bathe here, the geothermal pool is part of the rich history of Iceland, so it's well worth a visit.

The Legacy of Snorri Sturluson

The Snorralaug hot spring was named after the famed 13th-century poet and author Snorri Sturluson, who composed his incredible sagas of Iceland in the village of Reykholt. Sturluson settled in Reykholt in 1206 A.D. and led a remarkable life there.

While he lived in Reykholt, Sturluson wrote poems and sagas and served as a speaker in parliament. He also acted as a chieftain in the civil war but was assassinated in Reykholt in 1241.

The word "Snorralaug" means "Snorri's pool." The hot spring was named after the poet because it's located near land he owned, and he used to bathe in the pool. He even built a tunnel that led directly from his house to the pool, and visitors to the pool are free to explore this tunnel today.

Even if you've never heard of Snorri Sturluson, you've likely felt the effects of his work. Writers and musicians alike have drawn inspiration from his Prose Edda, an old Norse textbook. Today, this impressive literature is our primary source of information on Norse gods like Thor and Loki.

One famous writer, J. R. R. Tolkien, took names from Snorri's Norse mythology and transplanted them into his work as the names of dwarves. J. K. Rowling has also taken inspiration from the work of Snorri Sturluson, as have musicians like Richard Wagner and Jimmy Page of Led Zeppelin.

It's clear to see that popular culture today owes much to the 13th-century Icelandic writer. A visit to his hot spring provides an excellent opportunity to discover the history up close.

Discover the History of Iceland

If you're interested in the local area's history, you'll enjoy visiting the Snorrastofa museum next to the Snorralaug hot spring. This small yet informative museum is worth visiting for an insight into Iceland's medieval history.

Snorrastofa's museum is on the ground floor of Reykholt's church. The Ring from Reykholt, an 18-karat gold ring, was discovered in the church's chancel by Gudrun Sveinbjarnardottir in 2005. The ring dates back to approximately 1500 A.D. and features beautiful acanthus leaf decoration.

One of the ring's most distinctive features is its upturned, convex top edges. Although the original ring is kept at the National Museum of Iceland, there are reproductions of the ring for sale in various sizes in the Snorrastofa museum's gift shop.

More Things to Do in Reykholt

It's clear that the quaint village of Reykholt, home to the Snorralaug hot spring, boasts impressive historical significance. However, there's more to this village than just a geothermal pool and a museum.

The village is situated in the Borgarfjordur valley, on the western side of Iceland. It has a population of less than 100, but despite its small size and remote location, it offers visitors a wonderfully traditional experience.

In addition to the Snorralaug hot spring and the Snorrastofa museum, the village is home to the Reykholtskirkja church. This is a very pretty church building with a bright red roof and a colorful interior.

If you're in the Reykholt area during the winter, you may be lucky enough to witness the northern lights, as the village's remote setting means minimal light pollution. If you're visiting in the summer, check out the Reykholt festival, an international chamber music festival held each year in July.

Whatever time of year you visit Reykholt, look out for wild Icelandic horses — they roam the area.

How to Reach the Snorralaug Hot Spring 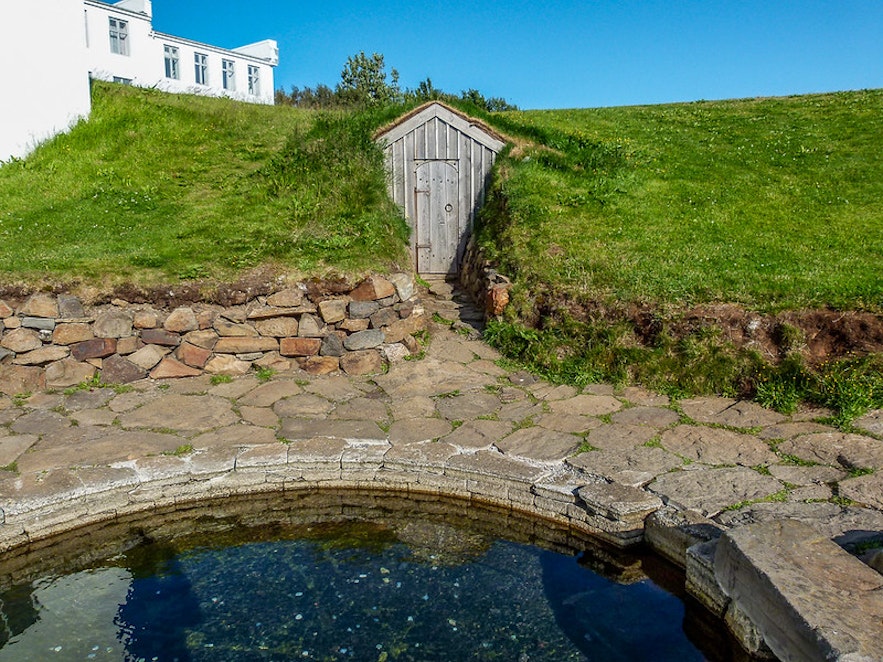 Photo from Flickr, Creative Commons, by Lily Fortes. No edits made.

The Snorralaug hot spring is located near the western end of Halsasveitarvegur 518. It's 67 miles (approximately 108 kilometers) north of Reykjavik.

There are several ways to visit the Snorralaug hot spring. One option is to book a nine-hour group tour of the silver circle, and another is to take part in an eight-hour nature and culture sightseeing tour.

If you'd prefer to explore on your own schedule, you can rent a vehicle and drive there on a self-drive tour. A ten-day self-drive tour of the ring road will let you travel around the entire country, including a visit to Reykholt.

If you drive there from Reykjavik, follow Sudurgata to Hringbraut or Route 49. Continue from Route 49 to Thjodvegur 1, then take Borgarfjarddrbraut 50 to Halsasveitarvegur 518. Alternatively, check out some of these tour packages, like the Silver Circle tour. In addition to the hot spring, this tour will take you to several waterfalls and hot springs in West Iceland.