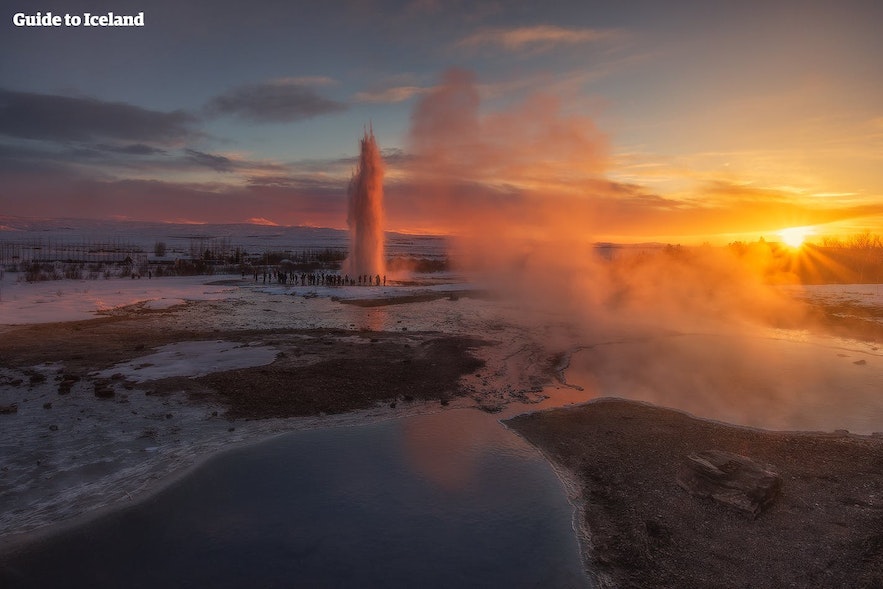 The Geysir geothermal area is a hot-spring paradise in Haukadalur valley. The area is most famous for being the home of the geyser from which all other geysers derive their name: Geysir.

Though Geysir itself is currently in a phase of inactivity, its neighbor Strokkur more than makes up for it. Every five to ten minutes, it bursts a column of boiling water to heights that can reach over 130 feet (40 meters). Strokkur's reliable activity guarantees a picture-perfect shot of the hot spring in action when you visit the valley.

The surrounding area is dotted with various fumaroles, hot springs, and mud pits. There are also two other smaller geysers, Smidur and Litli-Strokkur, that can be easily visited, as well as a hotel, restaurant, cafe, and gift shop across the road. The geothermal area has free admission and is always open to visitors, so you could even marvel at the erupting hot springs under the northern lights. 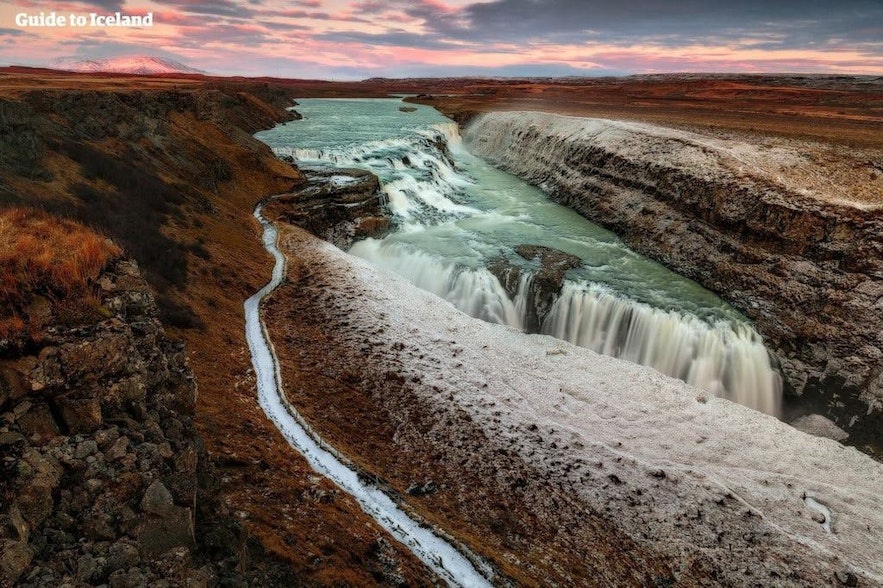 The 'Golden Falls', Gullfoss, is one of the most beautiful and powerful waterfalls in Iceland, plummeting 105 feet (32 meters) in two tiers into the river gorge of the popular rafting river Hvita. It is just a ten-minute drive from Geysir and is the furthest point on the Golden Circle from Reykjavik.

Unbelievably, Gullfoss was almost lost in the early 20th century when British developers sought to harness its incredible force for hydroelectric power. But with help of the arduous work of Sigridur Tomasdottir, the daughter of the landowner of the farm adjacent to the waterfall, the British developers eventually withdrew their plans.

This makes her Iceland's first environmentalist and helped establish a mindset within the country to protect the natural beauty of Iceland. A memorial was raised in dedication to Sigridur in 1978 on the cliff overlooking the waterfall for her effort to protect Gullfoss.

Thankfully we can now enjoy the majestic sight of Gullfoss at any time, whether it's during winter when it's surrounded by snow and ice with the northern lights in the sky above. Or during the summer when it's crowned with a near-permanent rainbow as the midnight sun shines on. 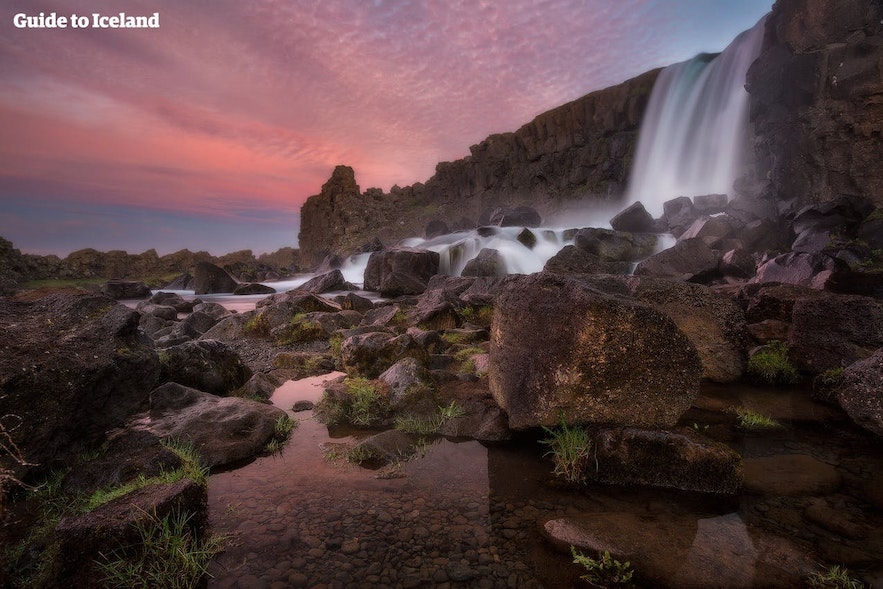 The largest attraction of the Golden Circle is Thingvellir National Park. Iceland's national assembly, which eventually evolved into a parliament, was founded at this site in 930 and remained there until the year 1798 before moving to Reykjavik. That makes it the original site of what is now the world’s oldest legislature in existence. It was also the ceremonial site of Iceland's declaration of independence in 1944 and the appointment of Iceland's first president.

Thingvellir is located in a rift valley between the North American and Eurasian tectonic plates. This means the area is full of dramatic cliffs, flowing rivers, and deep gorges, as the area has been slowly torn apart for millions of years by the tectonic plates that drift away from each other at a pace of one inch per year. It is one of the few places in the world where you can walk between the continents in the Mid-Atlantic Rift.

The most daring visitors even have the opportunity to snorkel or scuba dive in this no-mans-land, in a ravine filled with crystal-clear spring water called Silfra. The visibility here can exceed 330 feet (100 meters), revealing incredible geological sites. Though it never freezes over due to the constant flow of water into it, it has a temperature of 35 F (2 C) throughout the year therefore, explorers are always equipped with protective suits.

Other sites of note are the magnificent Almannagja gorge, which you can walk down into to reach the rift valley from the North American tectonic plate, and the beautiful lake Thingvallavatn, the largest lake in Iceland, which is to the south of the National Park.

Due to its convenient location in southwest Iceland, it is easy to visit the Golden Circle alongside many other sites. Those seeking relaxation could head to the Secret Lagoon in Flúðir or Fontana Spa in Laugarvatn. The adventure seekers could book a trip to the glistening ice tunnels of Langjökull glacier. If you're looking for a more laid-back time, you can visit the unique Solheimar ecovillage. For more natural beauty along the route, you can also visit the nearby Kerid crater lake.

There are many Golden Circle tours that include some of these sites as additional stops along the way, but if driving yourself, you should check out this guide to great detours off the Golden Circle.