Gunnuhver is the name of an impressive and colourful geothermal field of various mud pools and fumaroles in the southwest part of the Reykjanes Peninsula. It is tied to a fascinating legend of the region.

Visit this region on a self drive tour in Iceland.

The tale of Gunnuhver is an example of classic Icelandic folklore, tying together the harshness of life on the island, ghosts, curses and the saving power of Christianity.

It was said that a woman called Gunna lived on a farm on the Reykjanes Peninsula about four hundred years ago. She was tied to the land in poverty, under the authority of a wealthy lawyer.

One day, she was unable to pay her rent, and her landlord took one of her only possessions, a cooking pot, as payment. She was enraged, and said she would starve herself until it was given back. Neither relented, and she died of hunger.

When her coffin was being carried to her grave, however, those holding it noticed it suddenly grow light. Then, a whisper echoed to the congregation: ‘No need deep to dig, no plans long to lie’.

The body of her landlord was later found mutilated, and all who heard the whisper suspected the ghost had killed him.

Unfortunately, Gunna’s vengeance did not end there. She killed his wife in a similarly brutal attack, then began to haunt the peninsula, driving many residents to madness.

This continued until the arrival of a priest, Eirikur, to the peninsula. Considered a sort of holy sorcerer, the locals begged him to help. He came up with a plan, involving a ball of yarn.

He gave the ball to the locals, left one end where Gunna was known to haunt, and told them to take it to the nearby hot spring and toss it in. They walked off with it, and Gunna picked up the end to follow their trail.

When the yarn was thrown into the hot spring, it took the spirit with it. It is still said that through the mist of the pools, it is possible to see her fighting to escape, and as such, the hot springs took her name.

The Reykjanes Peninsula is highly volcanic, due to the fact that the Mid-Atlantic rift runs right through it. This leads to many hot springs, with others occurring at Krýsuvík and beneath Lake Kleifarvatn.

These springs are beautiful, but unpredictable. In one of the mud pools, it is possible to see the engulfed remains of the old path, which was consumed by it expanding. 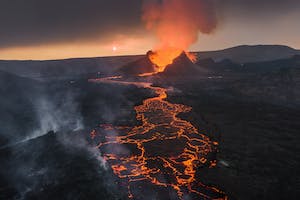