Njarðvík is a town located on the Reykjanes Peninsula in the southwestern part of Iceland.

Photo from Wikimedia, Creative Commons, by Marek Slusarczyk. No edits made.

The town is named after an estuary on the northern part of the Reykjanes Peninsula, east of the spit Miðnes. Njarðvík consists of two regions, called Innri Njarðvík and Ytri Njarðvík, or ‘inner’ and ‘outer’ Njarðvík. Subsequently, the locals often refer to the town in its plural form of "Njarðvíkur". The population of the town consists of approximately 4,400 people.

Njarðvík was formerly part of the municipality Vatnsleysustrandahreppur, but received independence in 1889. In 1908, the neighbouring town of Keflavík merged with Njarðvík to form Keflavíkurhreppur, but the residents of Njarðvík abandoned the merger in 1942 due to conflicts over electricity and fishing. Njarðvík received trading rights in 1967, and in 1994, it got conjoined with the towns of Keflavík and Hafnir to form the municipality of Reykjanesbær. 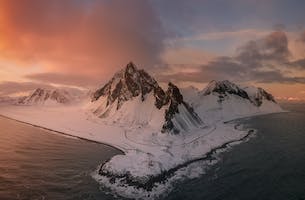