Drangurinn in Drangshlíð and the Elves in South Iceland - Icelandic Folklore

A peculiar rock stands alone in South Iceland below the beautiful Eyjafjöll mountains with a couple of elf stories linked to it. And seeing that I am a great fan of elf stories, then I want to tell you about the elves in this rock, which is called Drangurinn in Drangshlíð.

I found this folklore in Þjóðsögur Jóns Árnasonar - the Collection of Folklore by Jón Árnason and translated it into English:

"In Drangshlíð by Eyjafjöll mountains, there is a big rock in the field, almost the height of 20 men. On one side of it, there are caves and big spaces beneath it, and the farmers kept there all of their hay and their cowsheds. 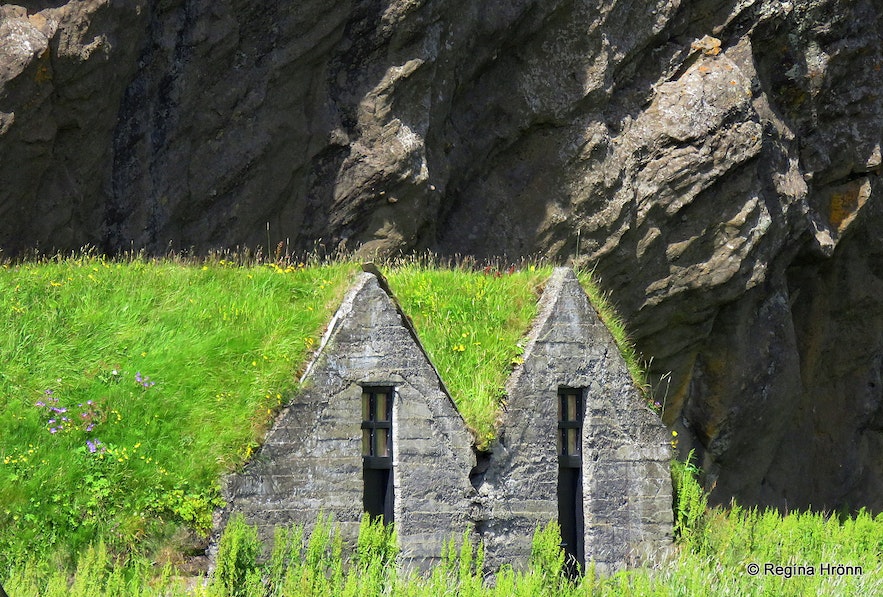 In the cowsheds, no lights would live, as it were, no matter how hard people would try to keep them alive (i.e. candlelight). When a cow was about to give birth the farmer or his assistants would never have to keep awake and stay by the cow. If a cow would give birth at night, as often happened, then the calf would be in the stall by its mother's side in the morning, and the cow would be well.

But if a new farmer would f.ex. buy the farm and would, as he was used to, have his assistants stay with the cow while it was giving birth, something would inevitably go wrong, and the assistants would not be able to stay inside in the dark cowsheds due to something they saw or heard...

There is a story of a man who had been in Skarðshlíð (above Drangshlíð) and who had been missing for days. He had been with the elves in the Drangurinn rock and told people that an elf woman wanted to marry him. 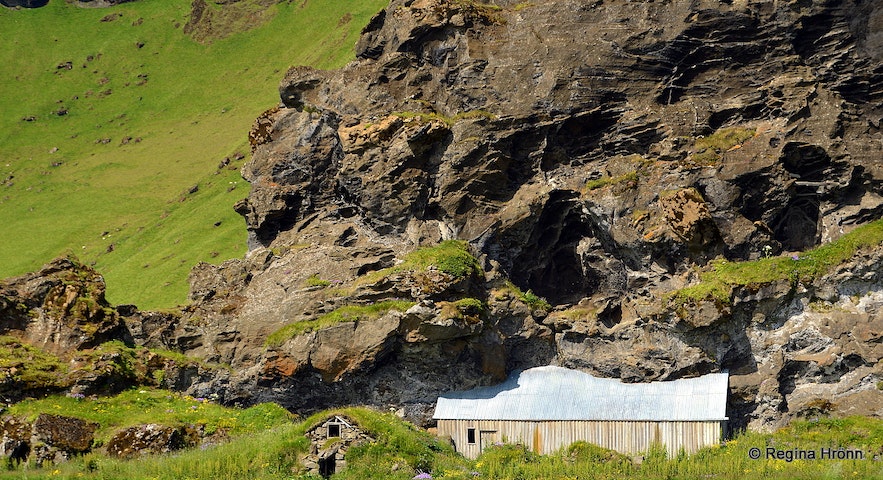 And he said that many people lived in the rock and it was lovely being with them; they were decent and orderly and as beautiful as human beings. He said that they went to church in Skóganúpur; there was a big church there and another church in the valley, as there were so many people.

He said that they owned sheep, cows, horses, and ships and the men would very often row and catch fish as we humans do. They would carry the fish home on horses and there were many similarities between them and us; they had lamplight and candles.

And as the year had passed and he was free from his services on the farm - as he was a worker on the farm - it was common knowledge that he had disappeared and was never seen again. People did not search for him because they knew where he had gone, even though he hadn't told them". So a human man married an elf-woman and lived with her inside Drangurinn rock! 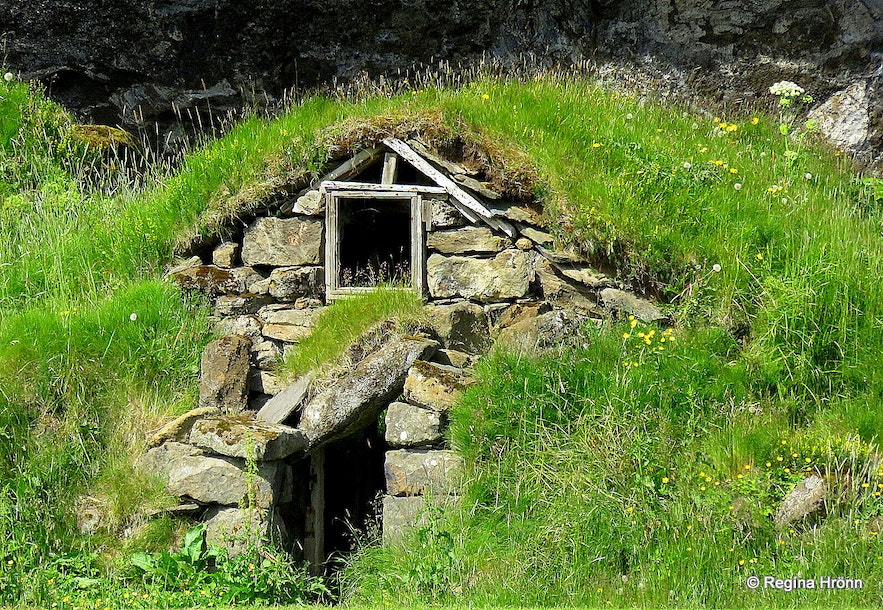 I recently read another excellent book on this area called Íslensk þjóðfræði - Iceland Ethnology by the very knowledgeable Þórður Tómasson. There the elf stories are more detailed. In the book, he talks about the cowsheds in Drangurinn in Drangshlíð.

Human beings were not allowed to sit by the cows while they were giving birth. If the farmer could see that a cow was about to give birth that night he would leave the milking bucket, filled with good hay, by the window above the door of the cowshed.

The elves would then attend to the cow, they milked it after it gave birth, and fed the calf and the cow. And the milking bucket was in the same position where the farmer had left it - but with the beestings ("broddur")!

If this tradition was not followed strange things would happen: once the farmer wanted to check in on the cow, which was about to give birth when he left it, and the newborn calf was thrown out of the shed and into the arms of the farmer when he opened the doors to the cowshed! 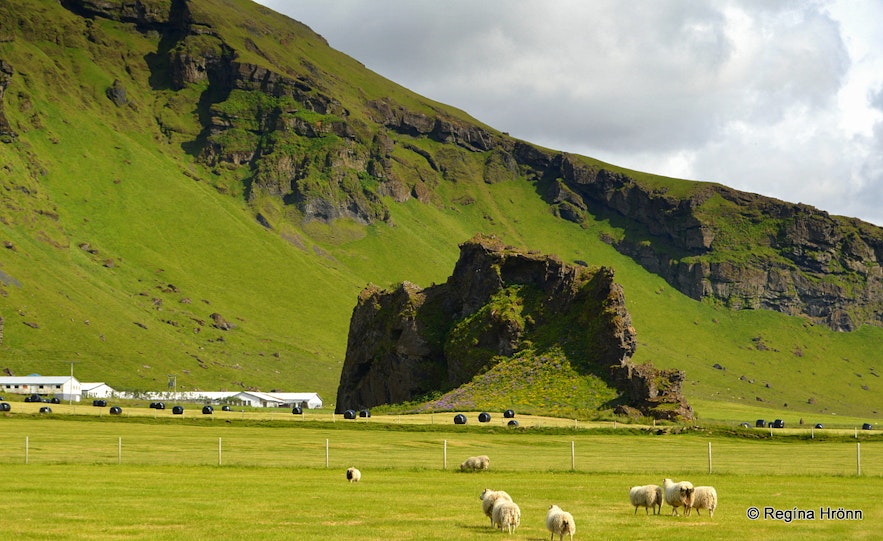 Another such incident happened in the first part of the 19th century: the farmers asked two of their workers, a man, and a woman, to sit by a cow while it was giving birth, as it looked like the cow would have some problems giving birth.

Well into the night the man told the woman to go make some coffee for them. But as she came back with the coffee she found the man asleep in the cowshed.

The cow had given birth and the calf was by its mother's side, dry and clean. And the milking bucket was in its place with the beestings.  All this happened while the man was asleep.

There are many stories of the elves in the cowsheds, f.ex. of one of the stalls, which had to be kept vacant for the elf-cows 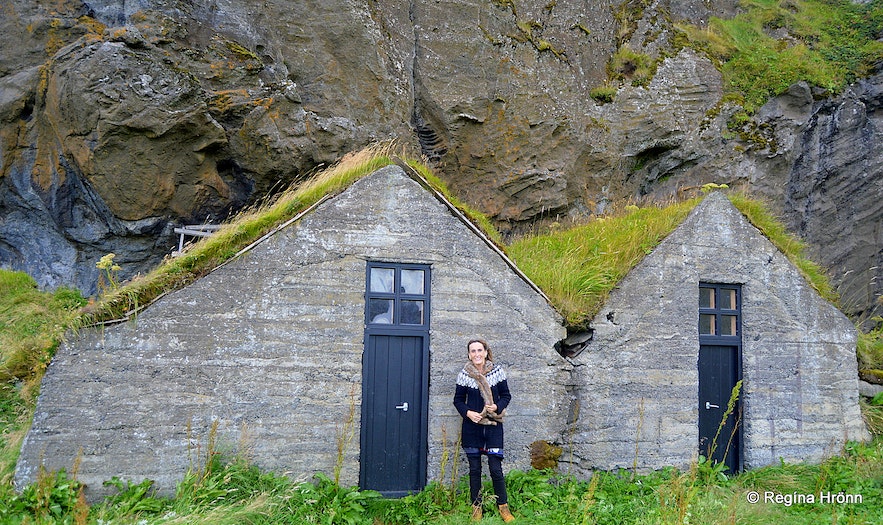 Scenes in the well-known Icelandic film Hrafninn flýgur - "When the Raven flies", a Viking film made by our noted film director Hrafn Gunnlaugsson, were filmed in this location.

Hrafn is my husband's second cousin and I very much enjoyed his film Hrafninn flýgur.

According to folklore then Grettir sterki (the strong) Ásmundarson tested his strength on this rock by pushing it from Hrútafell mountain, leaving the gap in the mountain. Very unlikely as this rock is huge, but a fun story anyway, and shows how much people believed in the strength of the legend Grettir the Strong. 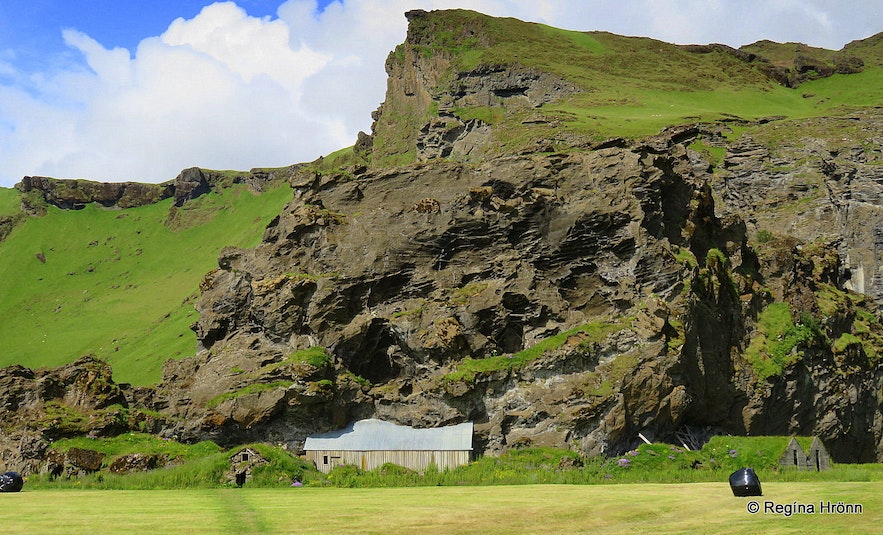 Here is a short version of this folklore, as told in Þjóðsögur Jóns Árnasonar - the Collection of Folklore of Jón Árnason:

"Grettisskarð or the Gap of Grettir is the name of a gap on the northern side of Mt. Hrútafell. Legend has it that Grettir the Strong Ásmundarson performed one of his herculean tasks there on his travels. 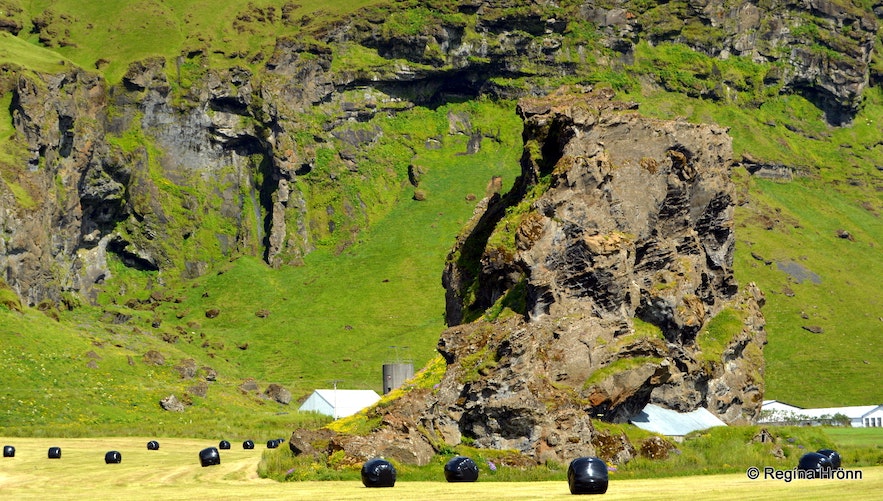 The rock is located in South Iceland west of Skógafoss waterfall by ring-road 1. It is located on the farmer's land, so better to ask for permission if you want to see it up close. And let's always show respect.

A little bit west of the rock there is another rock with a cave called Rútshellir, which is one of the most noteworthy man-made caves in Iceland.

I find these stories to be very interesting and they sure add colour and mystique to the beautiful nature of Iceland. I seek these places out on my travels and have told you about several other elf locations and mystical places in Iceland. I hope you enjoy reading about them as much as I enjoy visiting them. 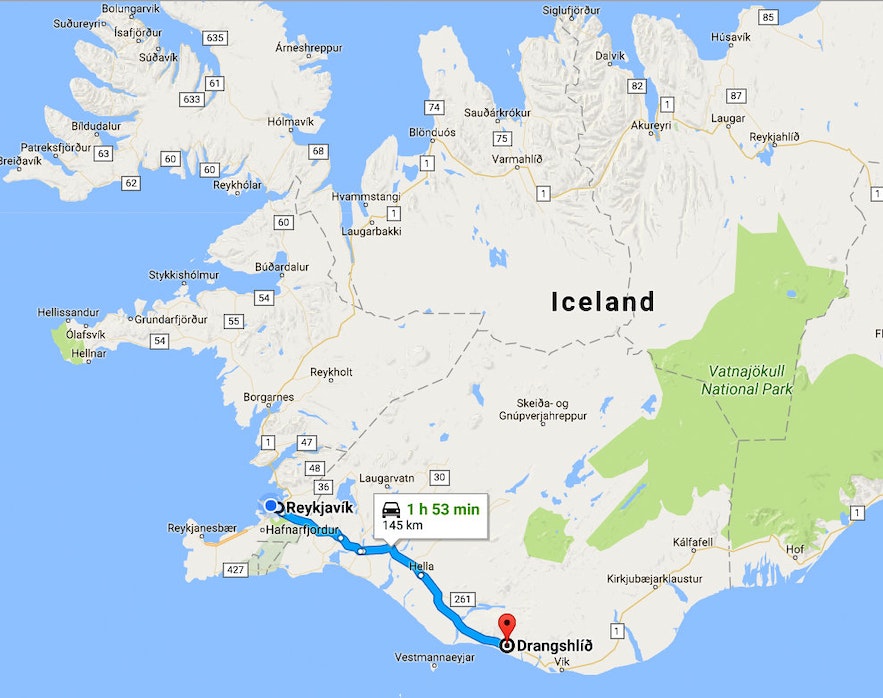 Here are a couple of the elf locations I have written travel-blogs about:

To reach this area you can rent a car in Reykjavík.