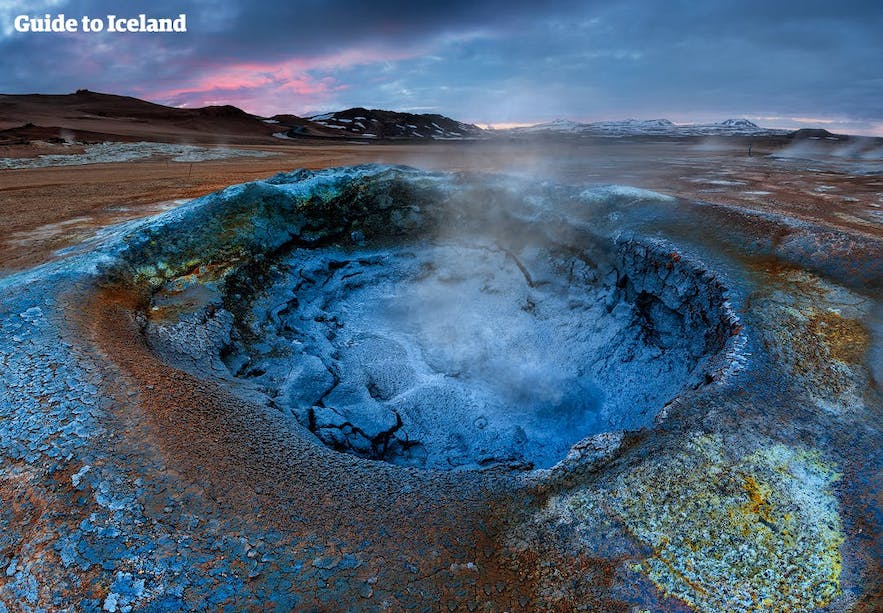 Námaskarð Pass is a geothermal area on the mountain Námafjall, in north Iceland, less than half an hour’s drive from Lake Mývatn. It is located by Route 1, which encircles the country.

Connected to the Krafla volcano system, Námaskarð is home to many hot springs and fumaroles.

Námaskarð is notable due to its barrenness; no vegetation grows on its slopes. This is due to the heat beneath the earth, the acidity in the soil, and poisonous fumes being expelled.

That is not to say, however, that the site is dull; its life comes from the vivid colours that streak through the earth, dyed by the elements brought up with the steam. Expect to see shades of red, orange, yellow and green, particularly concentrated around the springs themselves.

The air smells intensely of sulphur throughout the area, which, while unpleasant, is a constant reminder of the powerful forces at work beneath your feet. Though it would be damaging for your health to spend too long breathing it, a visit for a few hours will not cause any problems.

While exploring Námaskarð, be sure not to touch any of the running water, as it is likely to be boiling. Also, give all the hot springs a reasonably wide berth, as the land surrounding them may be unstable, with scalding steam just beneath the surface.

Námaskarð is situated between the mighty waterfalls of the Jökulsá á Fjöllum river (which include Europe’s most powerful waterfall, Dettifoss) and the Lake Mývatn area, making it a natural part of anyone’s itinerary if they are exploring the north from Akureyri or Mývatn.

Those travelling the Diamond Circle are also encouraged to make a stop here if they have time.