Witchcraft and Sorcery in Iceland

Are you in dire need of opening a lock without a key? Do you want to turn the milk in your neighbour's cow sour or drive your enemies mad with fear while safely sitting within your very own greater circle of protection? Then look no further, Icelandic witchcraft is just the thing for you.

Photo from Wikimedia, Creative Commons, by Abraham Ortelius. No edits made.

For centuries, Icelanders used magic spells, for both practical everyday purposes and specific unorthodox objectives. Witchcraft was a way of bestowing reason upon an unreasonable world and predicting the unpredictable; sorcery was to our ancestors what science is to modern man.

"Seiður" is the Icelandic word which is used to describe the magic rituals that were practiced in Iceland during the Viking age. The female practitioners were called "vísendakona", or woman of science, and the men were called "seið-menn", or the men of magic ritual.

Numerous ancient literary sources, including the Sagas, suggest that the Seiður was a shamanic ceremony, involving altered states of consciousness and cross-dimensional journeys, wherein sorcerers would gain secret knowledge and accumulate great power which was handed to them by the gods themselves.

Photo from WIkimedia, Creative Commons, by Lorenz Frölich. No edits made.

In pre-Christian Icelandic Mythology, seiður was associated with Oðinn, the god of war, poetry and sorcery, and Freyja, the goddess of fertility, magic and death; and during the days of first settlement, Icelandic sorcerers called upon these deities through spells and sacred poetry, asking to be granted the power to heal the sick, ward off enemies or simply ease the everyday toils of their fellow men and women.

Although in most cases, Icelandic sorcerers of Viking times used white magic for their personal benefit or to aid others in times of need, the dark years of the middle ages would come to provide quite a few exceptions to Iceland's lineage of white magicians.

The most famous sorcerer ever to practice dark magic in Iceland was Galdra Loftur, an ever diligent but somewhat psychotic student of the Hólar Latin school of priests.

For nine summers and nine winters, Loftur feverishly studied the black arts by day and by night, and at the end of that time, he could recite every banned verse of every forbidden book in the library. 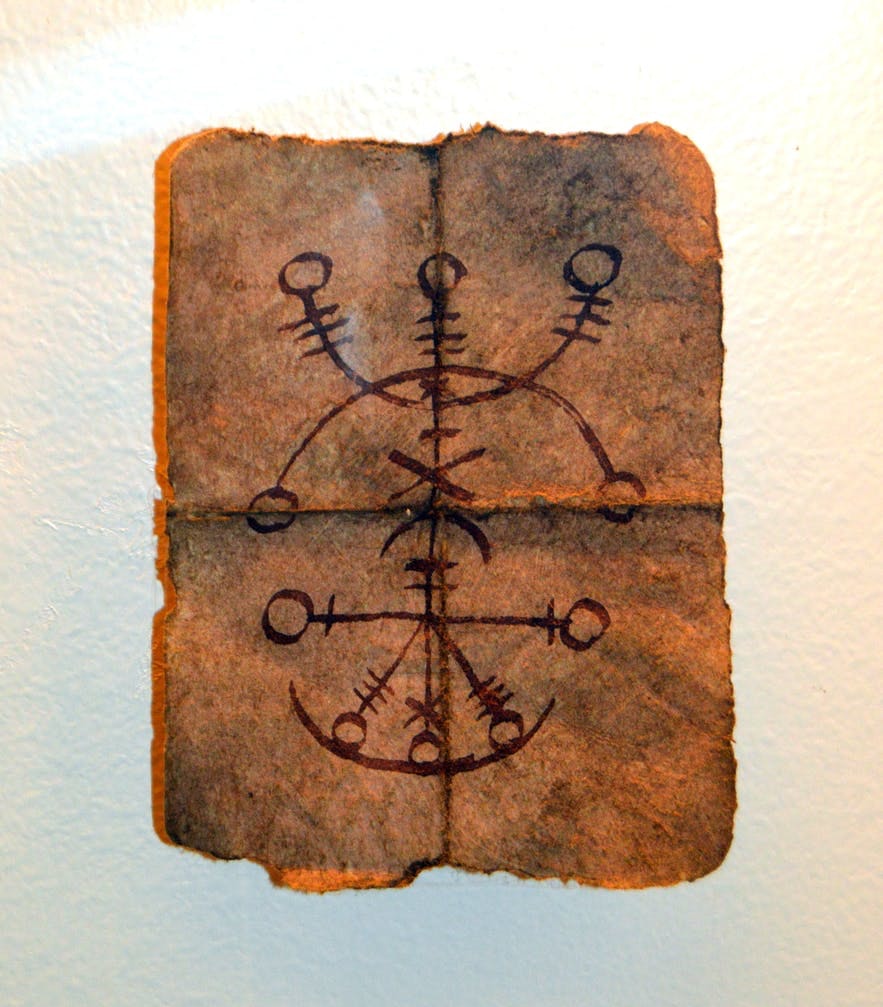 One day, when Loftur was to travel home for Christmas, he decided to try out his magical abilities by ironing the hands and feet of his chambermaid before putting her in harness and riding her home through thin air. The ordeal drove the woman mad and left her bedridden for the rest of her days, but she could not speak of her torment, so long as Loftur was alive.

As Loftur's magical potency and ambition grew, so did his insanity and eventually he descended into complete psychosis after failing to obtain the legendary grimoire Rauðskinna—a book of black spells used to control Satan—from the grave of the long dead bishop Gottskálk grimmi Nikulásson.

The failed project rendered Loftur a halfwit and subsequently he was placed in the care of a senile gray priest in the one horse province of Staðarstaður. Somehow Loftur managed to escape out to sea where a furry black claw emerged from the waters and dragged him into the black abyss below. Needless to say, he was neither seen or heard from ever again.

The Age of Fire 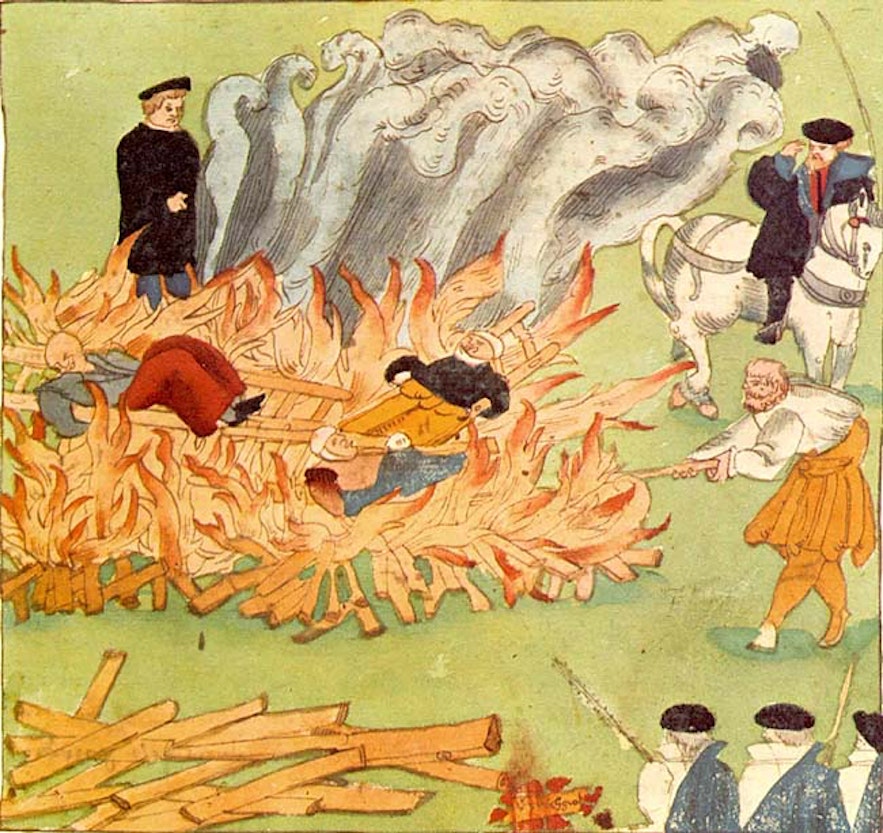 Photo from Wikimedia, Creative Commons, by R. Decker. No edits made.

Sorcery, black and white, was commonly practised in Iceland up until the 17th century, when what is known as the Icelandic Brennuöld (The Age of Fire) took place, during which well over 200 people were officially charged for either practicing sorcery or for being in possession of dangerous magical artefacts.

The predominant theme of the Icelandic persecutions is that when someone fell ill or was involved in an accident, he would simply blame his misfortune on a particular person he did not like, who consequently had to prove beyond a shadow of a doubt that he was not a sorcerer. Should magical artefacts, such as oddly shaped pebbles, runic booklets, suspiciously inscribed pieces of wood or raven feathers be found in his possession, the case was promptly closed and an anointed man of God would have a pyre lit on which the heretic was carefully burnt ‘ad majorem glorium Dei’.

The year 1654 marks the beginning of the Icelandic persecution with three people being burnt at the stake, but the last burning took place on the alluvial plain Arngerðareyri on the bay of Ísafjarðardjúp in 1683.

During the Icelandic age of fire, 20 people, the majority of them men, were sentenced to death and burned at the stake.

Sorcery and Witchcraft in modern times

To this day, Iceland is home to an active pagan religious congregation which subscribes to the ancient Icelandic mythology of Ásatrú, and pagan rituals are still practised by many modern Icelanders, although only a handful remain faithful to the original sorcery of antiquity.

On the farm Heimabær in Arnardalur valley, guests are free to participate in pagan ceremonies during summer and some ancient pagan festivals, such as the Þorrablót are modern day traditions that are celebrated annually in each Icelandic household. 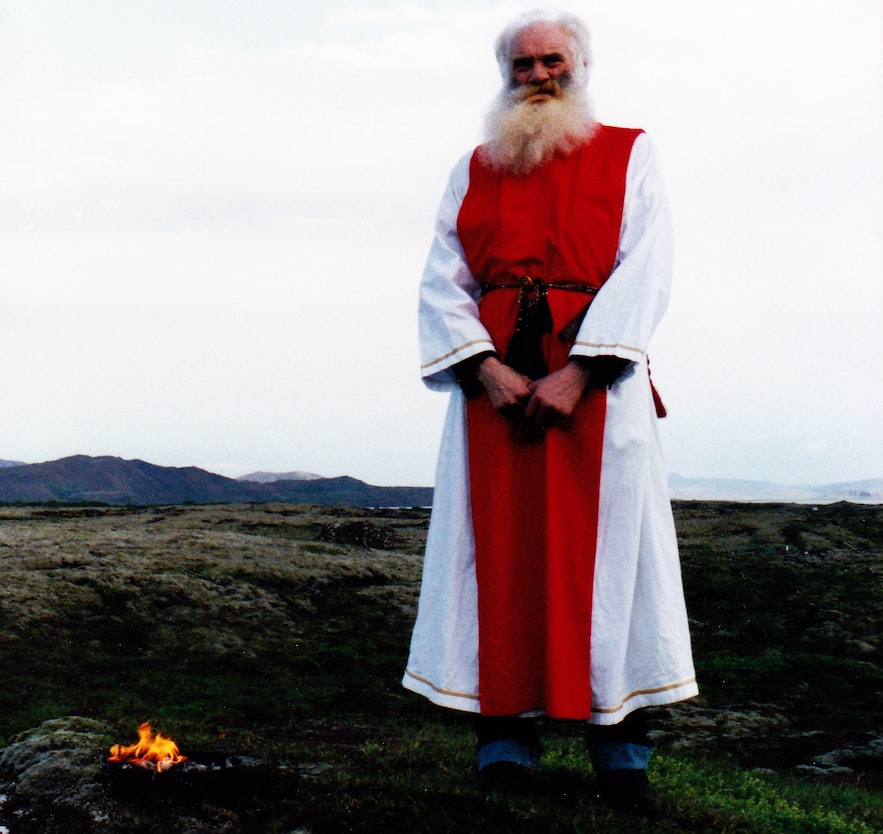 Photo from Wikimedia, Creative Commons, by Jónína K. Berg. No edits made.

In Hólmavík, on the eastern Westfjords, The museum of Sorcery and Witchcraft attracts over 15,000 visitors each year. The museum's main focus is on the detailed and arcane rituals and enchantments that the ancient regional sorcery called for, such as summoning udder sucking demons to steal goat's milk or forcing someone to fall in love with you for reproductive purposes.

The museum features a wide array of magnificent rune-carvings and fantastic magical artefacts, but the most astonishing piece on display, however, is the "necropants"—the dried skin of a man from the waist down. The human skin-pants were used in a powerful ritual that would bring the sorcerer an endless supply of silver coins.

In many instances, the sorcery for which Icelanders were tried and burned during the persecution of the 17th century can still be found in manuscripts that have been preserved and are on display in Icelandic museums; quite a few existed, but mere seven were copied and saved from the flames.

The Sorcerer’s Screed contains what is by far the most extensive selection of ancient Icelandic spells in existence, each accompanied by a sigil, or a "stave" and detailed instructions on its respective ceremonial use and desired function.

For centuries, the spells in The Sorcerer's Screed have been fundamental to Icelandic history and culture and are to this day fully charged with great magical potency.

Don't take our word for it, try them out for yourself.

STAVE TO RAISE THE DEAD, EXORCISE EVIL SPIRITS, OR LAY A GHOST 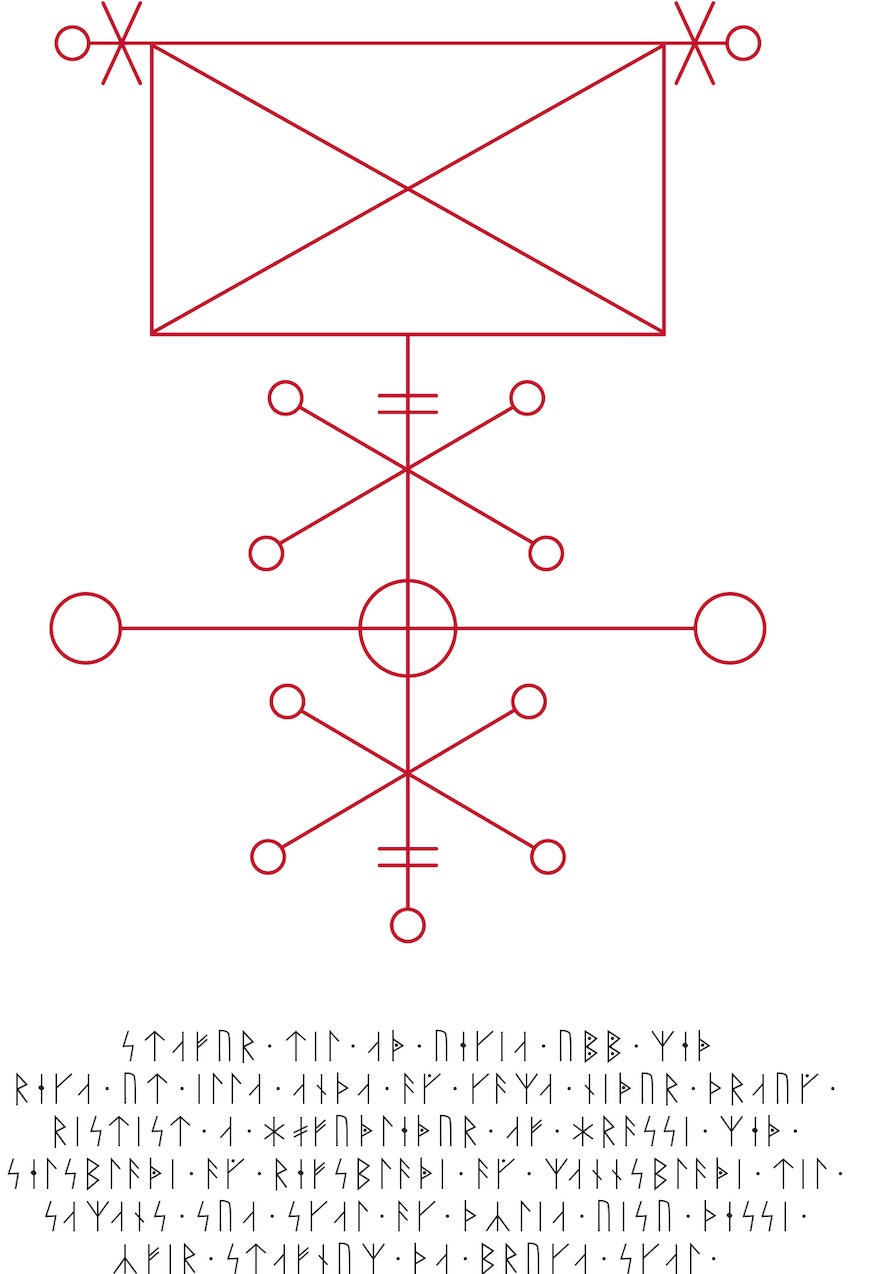 Inscribe on the scalp of a horse, using a mixture of seal blood, fox blood, and human blood. Recite this verse over the stave when you wish to use it: 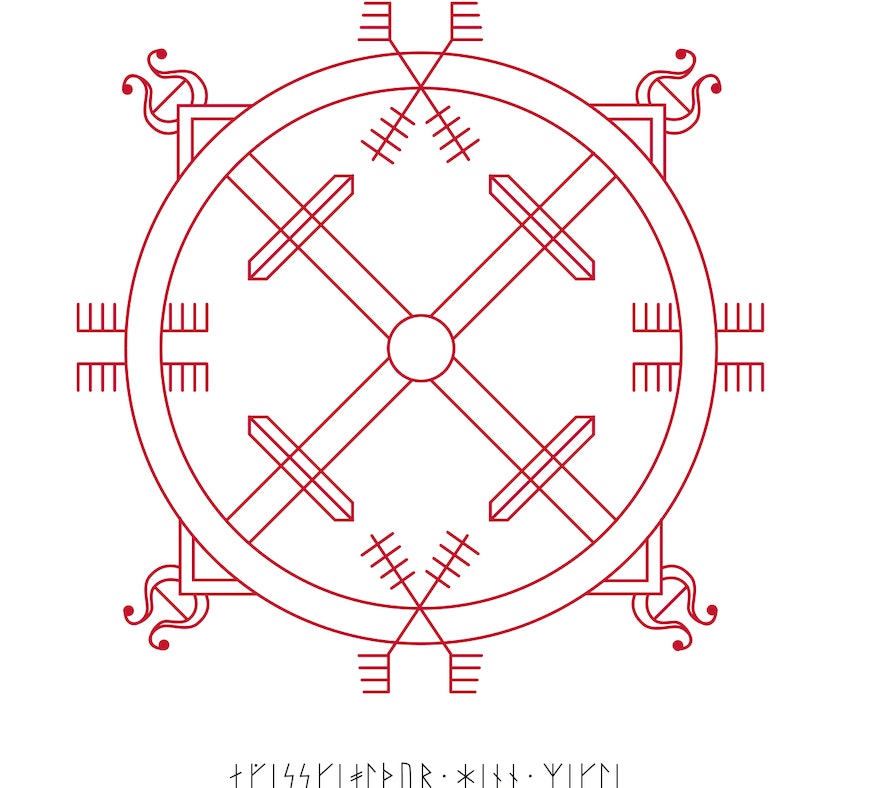 "This stave is to be drawn on black paper with raven bile, and then placed in the nest of a brooding raven. It is to be left there until the raven has hatched its eggs. Then take the paper, and it will be of great use to you. Even if a hundred men were your enemies, and they attacked you and wanted to kill you, this stave would save you easily. If you hold it up before you when facing your enemies, it will appear to them as innumerable black dragons, and that you are preparing to set them loose." 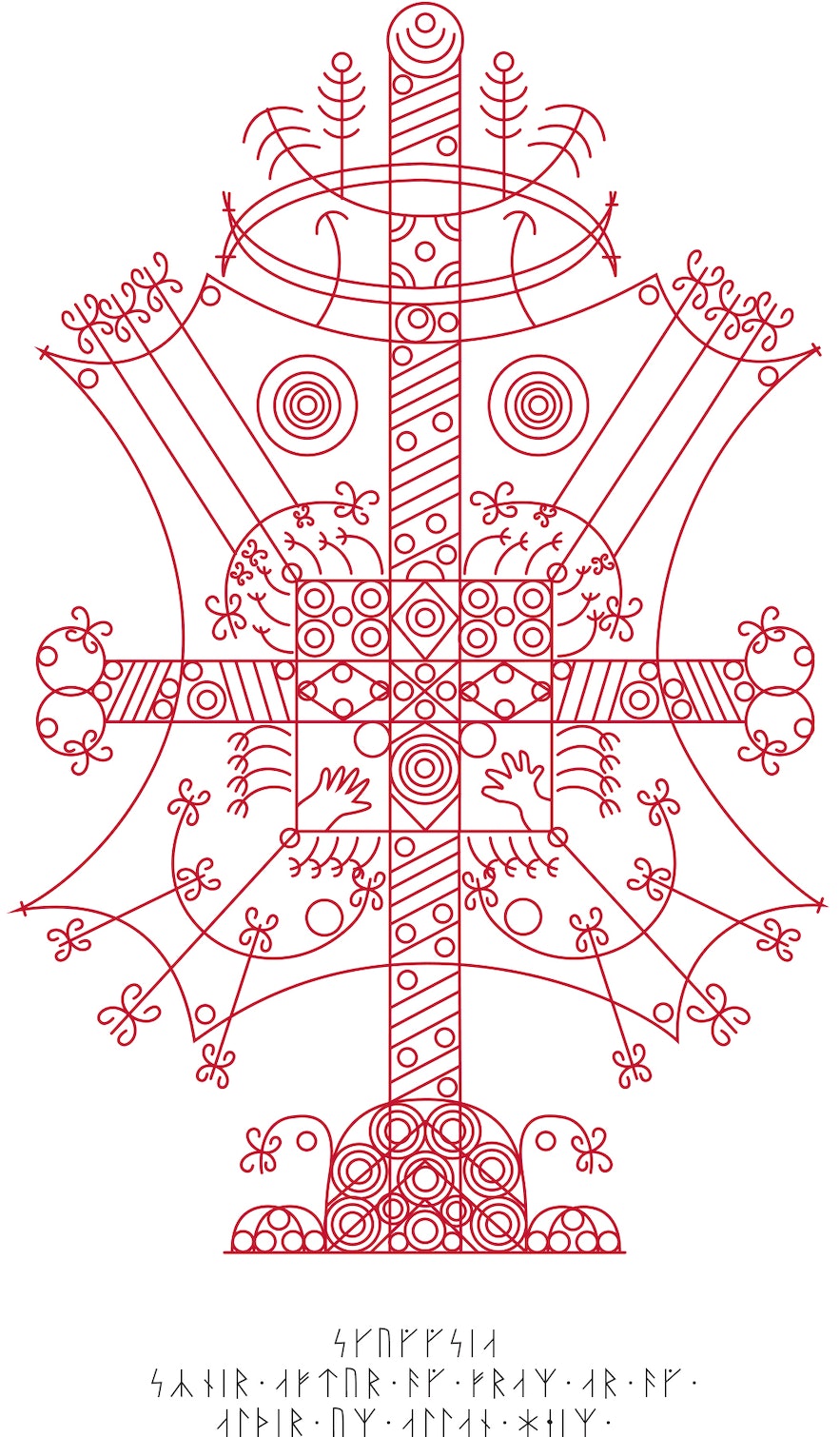 "Reveals backwards and forwards, for years and centuries, throughout the world.

"This stave is to be drawn on calfskin that has never been out under the bare sky, with the water from within a raven’s eye, and blood from the heart of a man and woman, who have loved each other with all their hearts but never consummated their love; and the stave is to be drawn with a water rail’s feather. Then myrrh is to be strewn over the entire stave. When the stave is dry, go to a spring whose temperature remains constant winter and summer, and over which no bird has flown that day, and strike the water with it, making sure to turn the stave downward. Then let the stave lie still in the water, while circling the spring four times counter-clockwise. Take the stave from the water and peek through it, and he who drew the stave will be able to see, if he wishes, throughout the world, backwards and forwards through the four cardinal directions. Then the stave is to be enclosed in an amnion, and never taken out unless it is to be used."