See a selection of wonderful photographs that capture the magic of the Northern Lights throughout Iceland.

These beautiful pictures by renowned nature photographer Iurie Belegurschi are a wonderful example of how the Aurora Borealis is one of the most incredible things you'll ever see.

Also known as The Northern Lights, they appear above the planet's magnetic poles when electrically charged particles from the sun collide with the earth's atmosphere, creating dancing displays of green, red, purple and blue.

We hope we see you under the Aurora in Iceland next winter. Enjoy the pictures!

These celestial phenomena make up the top of the bucket list for a countless amount of people from all over the world, wishing to behold their incredible beauty. When the earth is covered with a blanket of white snow, the green of the lights strikes out with an otherworldly appeal.

The Northern Lights Above the Coast in Iceland 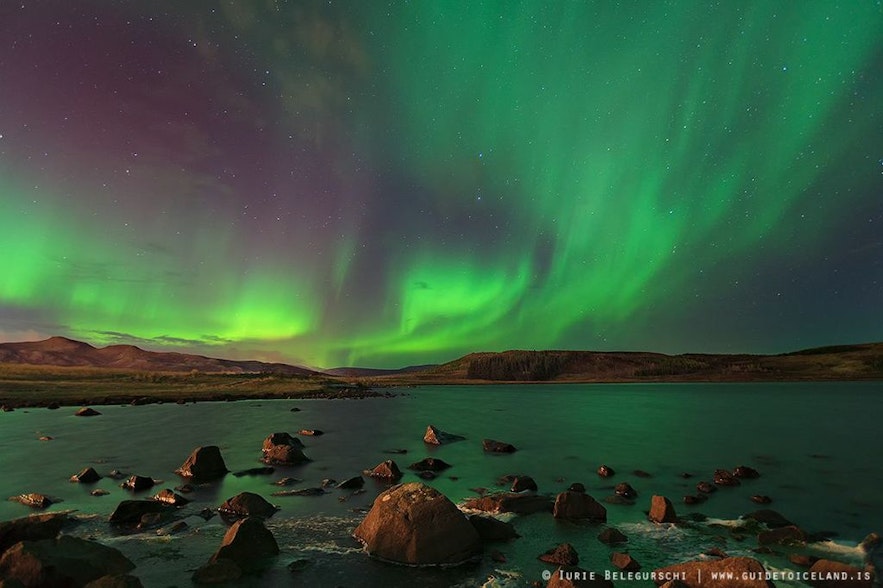 The lights are always there, but you can only see them when the sky is dark. Because of Iceland's midnight sun during the summer, the time for Northern Lights is usually restricted to the winter months of September until April. 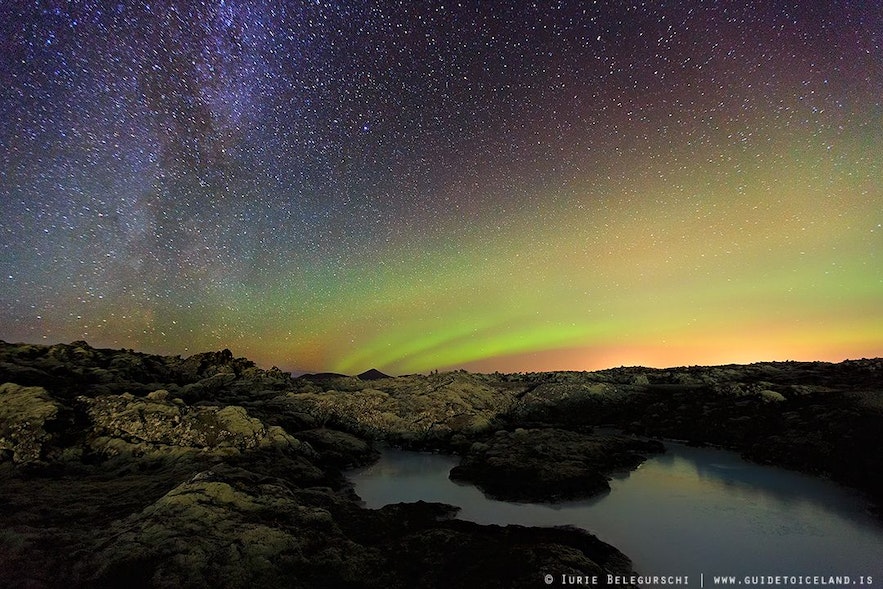 Besides darkness, for the lights to appear, optimal weather conditions are needed since the sky should be clear. From then on, it's all up to the sun's magnetic activity. You can check the forecast of the strength of the aurora's visibility at the aurora forecast.

The Northern Lights Over a Farm in Iceland 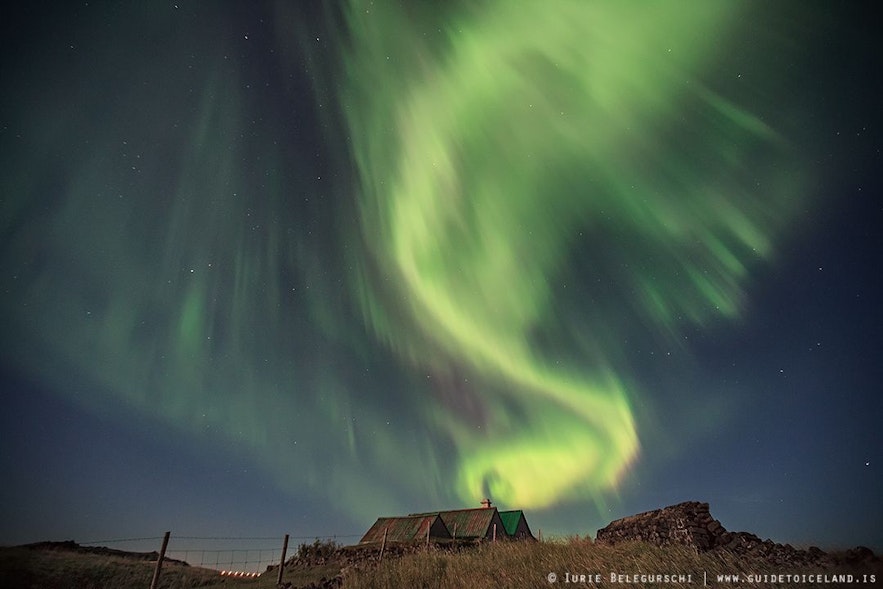 Although the lights can be seen anywhere in the country, including from the capital city of Reykjavík, the sky becomes the optimal canvas when there's no light pollution to be found. Besides, going somewhere rural provides the perfect backdrop for phenomenal photography—and a solitary moment with the cosmos. 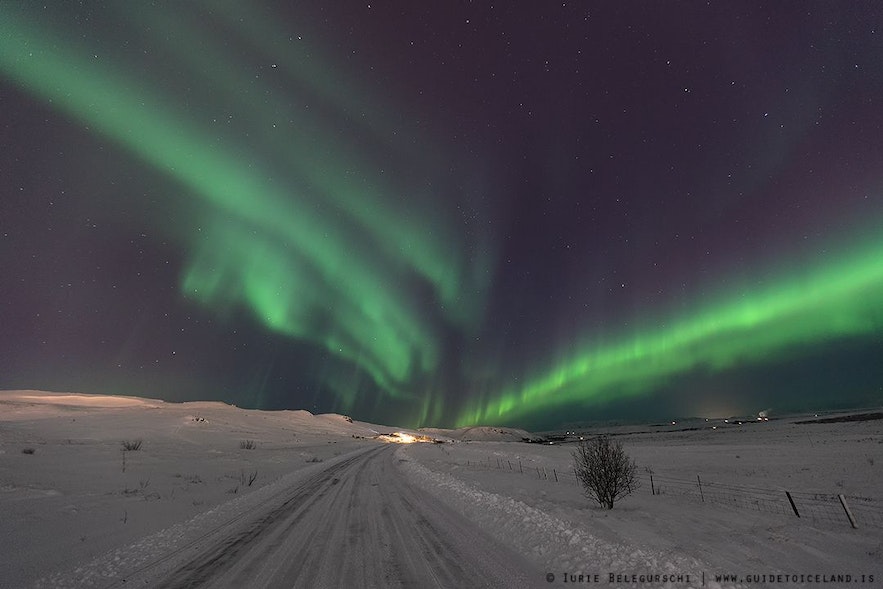 Remember to look up from your lens from time to time when hunting for the aurora, to remind yourself of the infinity of the universe. In the words of the one and only Carl Sagan: "The universe is vast and awesome, and for the first time we are becoming a part of it."

The Northern Lights Above a Geothermal Area 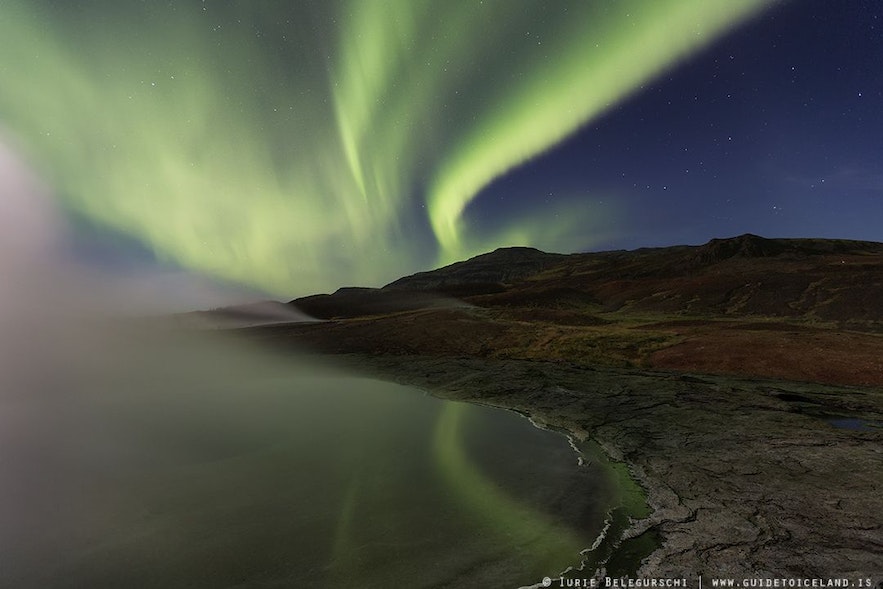 It gets mightily cold during the Icelandic winter, so remember to dress warmly when you plan on spending time in the great outdoors to gaze up at the night sky. For the optimal Northern Lights excursion, a fantastic tip is to bring a thermos of piping hot chocolate or coffee. 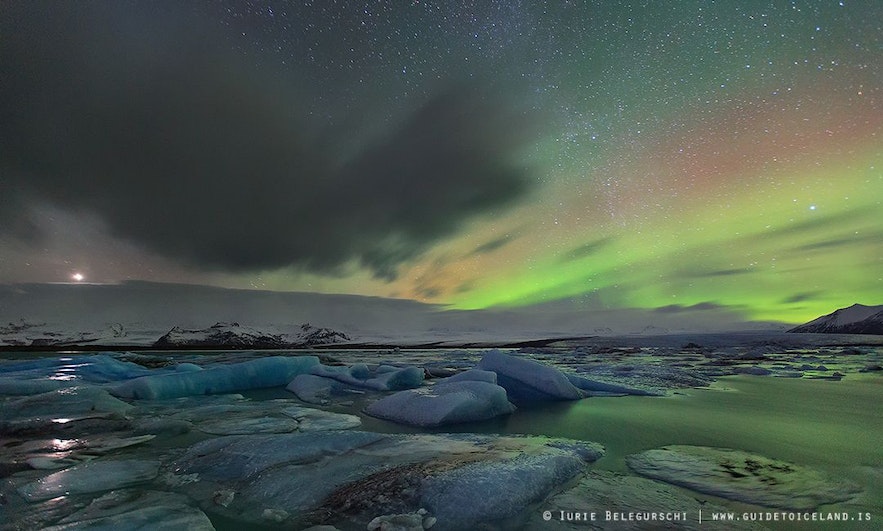 Iceland not only boasts wonders up in the sky but down below. Here you see a photograph shot by the fantastical Jökulsárlón glacier lagoon in South Iceland, where icebergs from Europe's largest ice cap Vatnajökull have broken off to float together in a beautiful lake by the South Coast.

The Northern Lights Above a Snowy Mountain 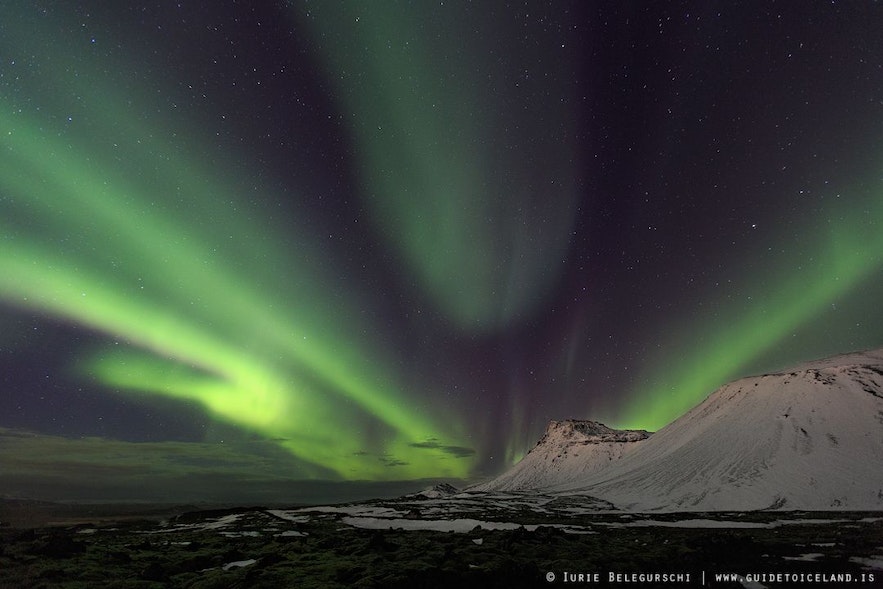 Who says you have to go hunt for the Northern Lights alone? According to our highly scientific research, there are hardly any ideas more romantic than leaving the city lights behind and going to hunt for the aurora with that special person, so bring a date—and enjoy a night out together the two of you will never forget.

The Northern Lights Form a Rainbow

Although their most common colour is green, the lights sometimes boast purples, blues, pinks and reds. These are, however, rarer and only appear if the activity of the lights is especially strong. So if you catch a pink or purple auroras, know that you are one of the lucky few.

The Northern Lights Over an Icelandic Lake

If you haven't made your way to the edge of the Arctic as of yet and only seen the Northern Lights on photographs, know that they're far from static. In fact, depending on their activity, they dance wildly across the sky. For an idea of their hypnotic movements, take a look at this video of the aurora waltzing over Jökulsárlón.

The Northern Lights Above Iceland's Highlands 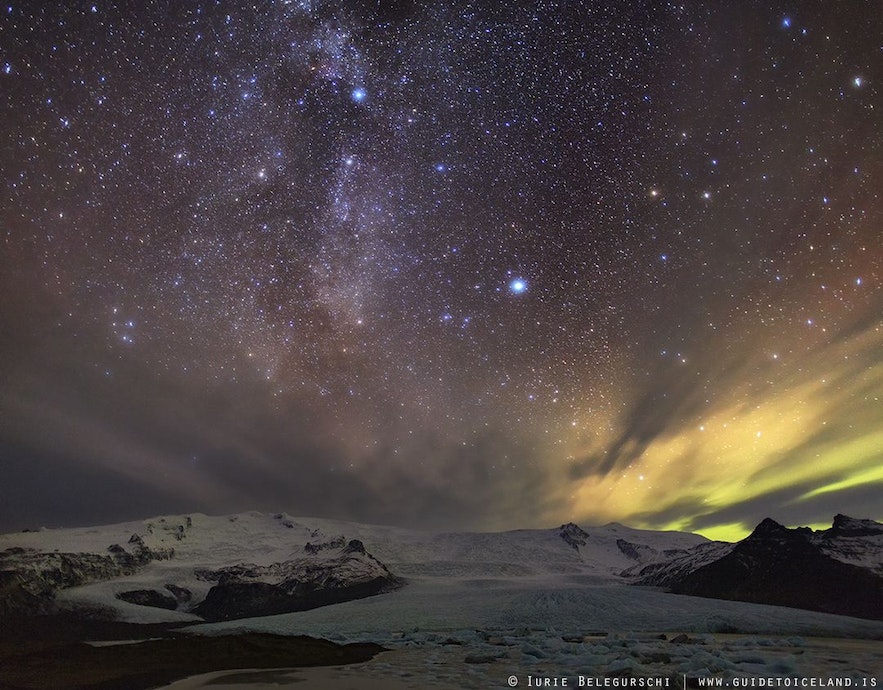 Since the Northern Lights need clear and dark nights to appear, that means when the lights are out, the stars are out as well. With the right camera equipment, you might catch the lights coiling themselves around the milky way.

The Northern Lights Above an Icelandic Mountain Range 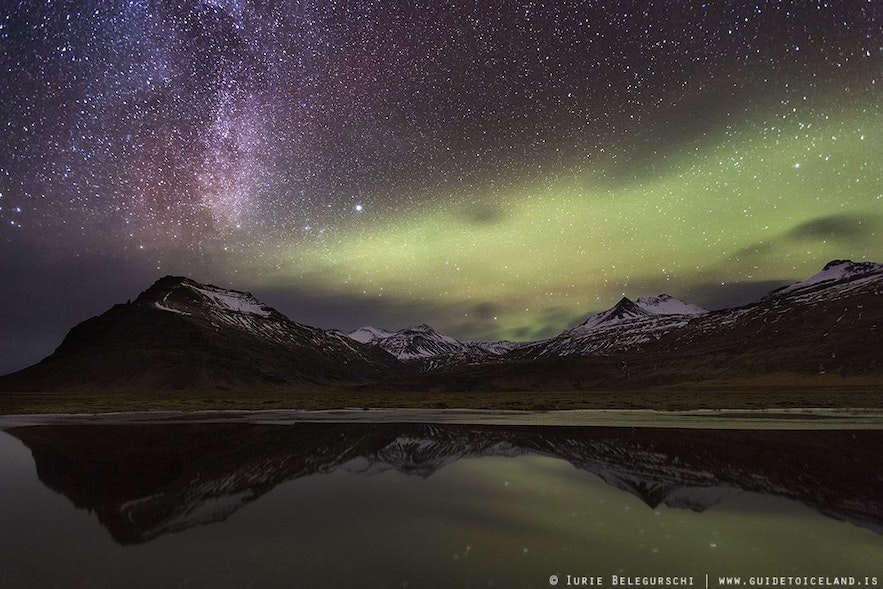 If the night in question is still enough, you can see the Northern Lights of the sky reflected in a body of water below, creating a mirror image like none other. There are plenty of scenic lakes to be found all over Iceland for such a mystical display. 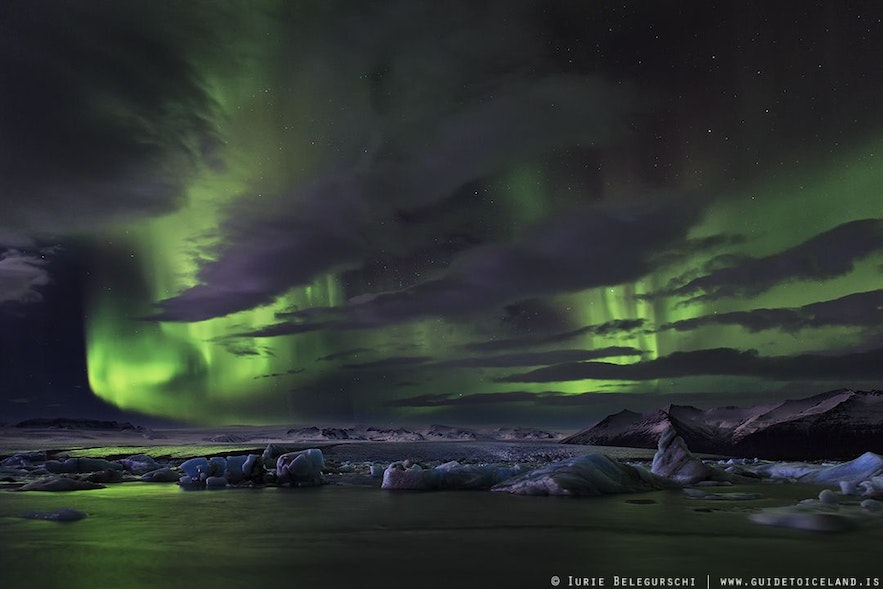 If the activity of the lights is strong enough, a few clouds actually don't hinder them appearing. So if you notice a few veils in the sky before you head out on your hunt, don't let it stop you—since you might still get your lucky shot.

The Northern Lights in the Westfjords 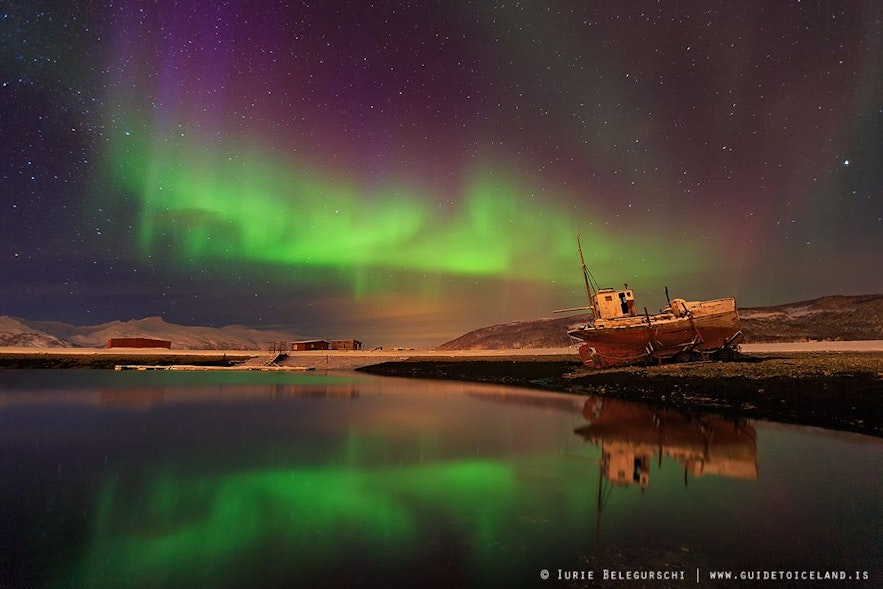 Travelling the Icelandic Westfjords in winter is not for the faint of heart, but the scenery at hand is unique and desolate in the most stunning of ways. This shipwreck nests in Patreksfjörður Fjord, providing a gorgeous backdrop for a Northern Lights photo. If daring the journey, make sure you rent a 4x4 vehicle.

The Northern Lights Over the Snaefellsnes Peninsula 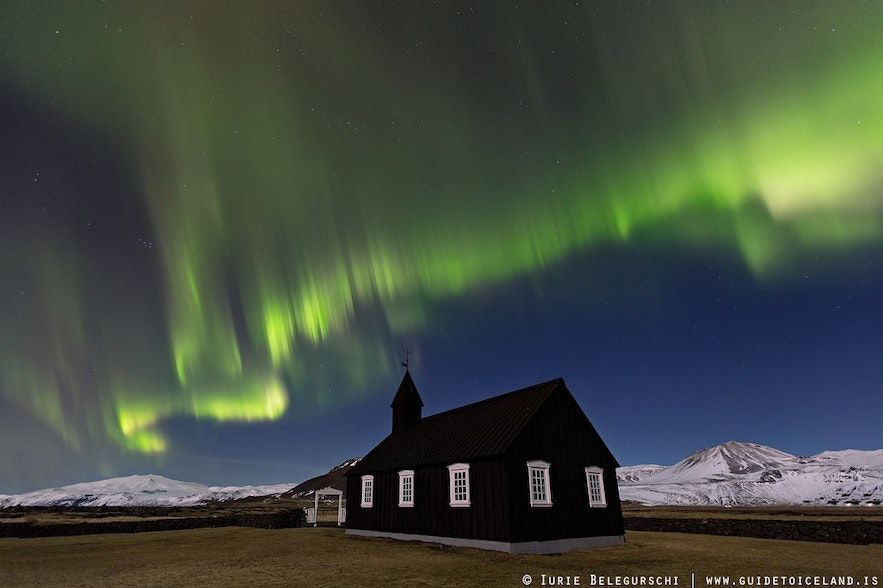 The historical monument that is the black church at Búðir is another example of an ethereal backdrop, as seen in this shot of the Northern Lights. The furthest tip of these auroras hovers over the twin peaks of Snæfellsjökull glacier and National Park, one of Iceland's three magnificent National Parks.

You can find the Búðir Church on the Snæfellsnes Peninsula in West Iceland, along with countless other historic and natural wonders. 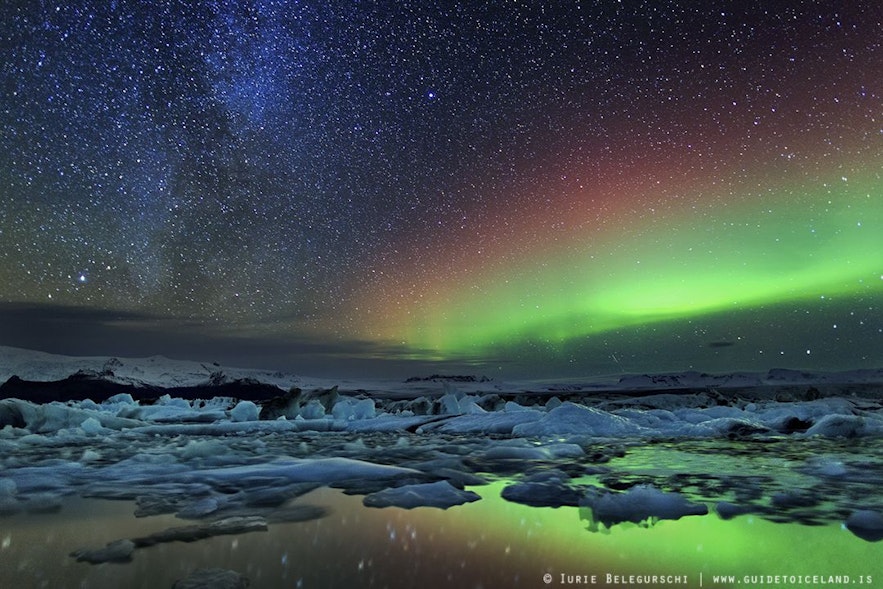 The Jökulsárlón glacier lagoon is but one of the incredible sites to be found near Skatafell Nature Reserve. Both are part of the greater Vatnajökull National Park, the most recently created and largest National Park in the country. 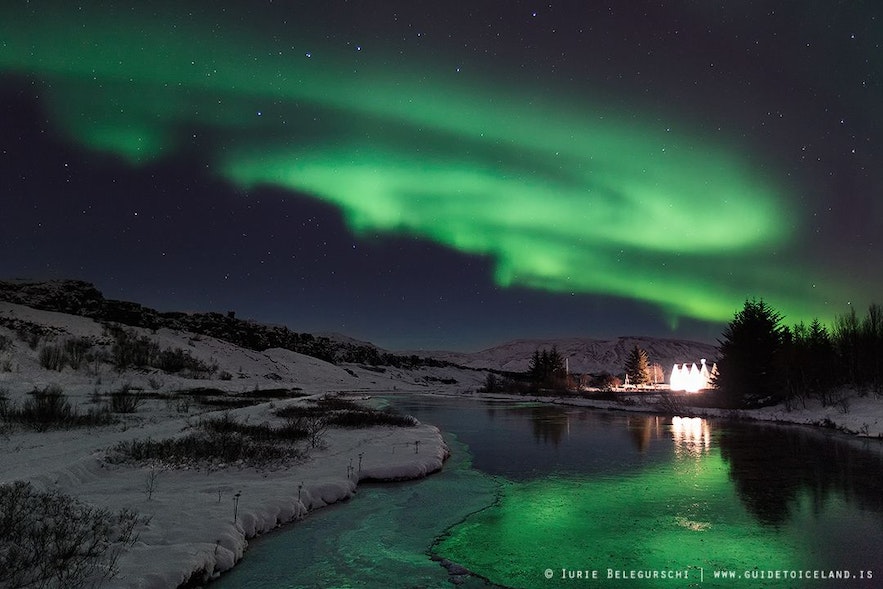 This photo was captured at Þingvellir, not only the country's third and final National Park but also a certified UNESCO World Heritage Site. This magical valley was home to Iceland's very first legislative body, the Alþingi, where law-makers of Old would gather to discuss legal matters and settle their bloodiest family feuds. The Alþingi continues today in Reykjavík, almost 1,100 years old.

The Northern Lights Over Icelandic Buildings 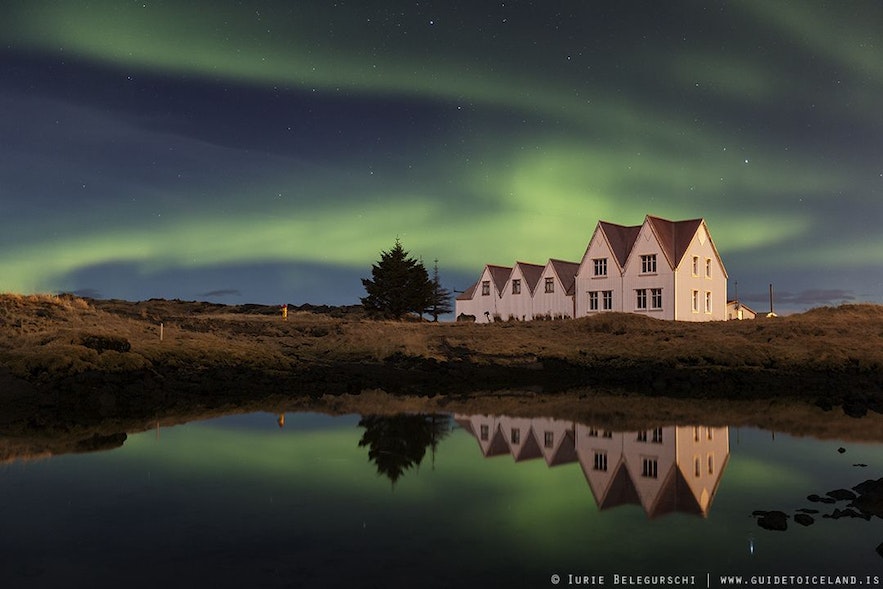 Þingvellir is located in a continental rift valley, where the North American and Eurasian tectonic plates are pulling apart, marking the crest of the Mid-Atlantic Rift. It's the literal conjunction of two worlds, and only more beautiful with the Northern Lights dancing above.

The Northern Lights Over Iceland's Glaciers 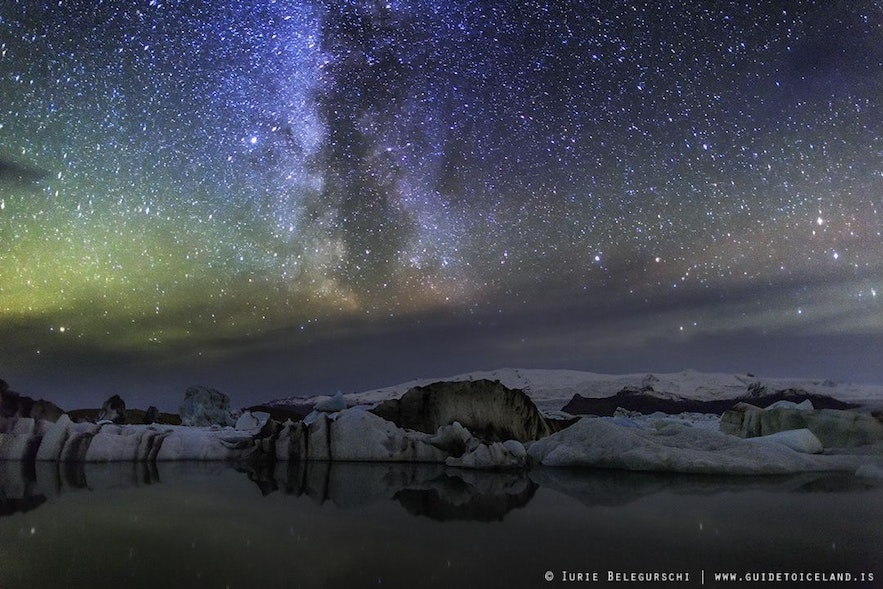 All three National Parks are the ideal backdrops for aurora photography, with few buildings and thus very little light pollution; they all also boast spectacular landscapes.

The Northern Lights in Iceland's Skies 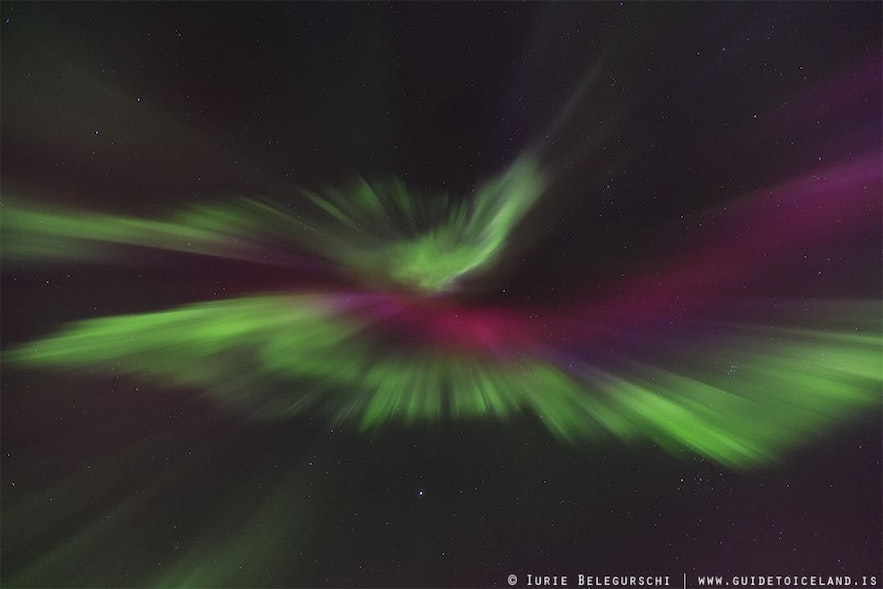 We hope you enjoyed these magnificent photographs of the natural phenomenon that is the Northern Lights. Now, all there is left for you to do is get out there and collect equally stunning shots of your own. Iceland looks forward to your visit!

Find out the best things to do in Iceland. Explore all the fun activities, natural wonders, best places to visit, and the most exciting day tours in Iceland in this list of the 12 top things to see...