Gluggafoss waterfall is a two-tiered waterfall located in South Iceland and is part of a series of waterfalls flowing from the Merkja river.

Travelers who love waterfalls should not miss the view of the Gluggafoss waterfall. You can add the waterfall as a stop during private tours, like the Tour of Thorsmork and Eyjafjallajokull Volcano or the 4-Hour Hiking Tour From Hvolsvollur. You can also add it during a road trip, such as the Summer Tour of the Ring Road and the Golden Circle.

Photo from Gluggafoss Waterfall in South Iceland - the One with the Windows.

Gluggafoss waterfall is a part of the Merkja river, which is known for the many waterfalls it feeds. However, one that stands out the most is Gluggafoss due to its window-like features, where the water comes out.

Further up the Merkja river are two more beautiful waterfalls, and with all of them together, they are called the Merkjarfoss waterfalls.

Gluggafoss waterfall is the pride of the Merkja river due to its outstanding beauty and unique appearance. This South Icelandic waterfall has rare geological features, which makes it an interesting place to marvel at and explore.

The waterfall's height is around 174 feet (53 meters), and its water drops in two steps. First, the waterfall's initial plunge is about 146 feet (44 meters) high. The second plunge, where the water broadens, is around 28 feet (8 meters), where it goes through three channels.

The upper half of the waterfall is made up of palagonite, while its lower half is made up of basalt. Palagonite is composed of various minerals, including mixed-layer clay, and is relatively soft, compared to basalt. Due to the palagonite's softness, some parts have crumbled through time, forming tunnels and windows.

Apparently, until the 1940s, the water cascading at the upper part of the waterfall was challenging to see and could only be viewed through the cliff's three "windows." These same windows are also why Gluggafoss earned its name, which means window waterfall.

Gluggafoss is located in South Iceland, around 77 miles (124 kilometers) from the capital city of Reykjavik. Meanwhile, Hvolsvollur is approximately 10 miles (17 kilometers) west of the waterfall and one of the nearest towns.

The waterfall is protected by the municipality of Rangarthing, which consists of the towns of Hvolsvollur and Skogar.

How Do You Get to Gluggafoss Waterfall?

There are many attractions in Iceland that are pretty difficult to reach. Thankfully, Gluggafoss is not one of them. To visit Gluggafoss, travelers can choose to rent a car and drive there or ride a bus to the nearest town.

Travelers who want to experience riding a bus in Iceland can do so through a Straeto bus, the only type of public transportation in Iceland. You can catch a Straeto bus from Reykjavik and get off at Hvolsvollur town after one to two changes.

From Hvolsvollur, you can rent a car and drive to Gluggafoss waterfall.

Gluggafoss Waterfall and Some Nearby Attractions 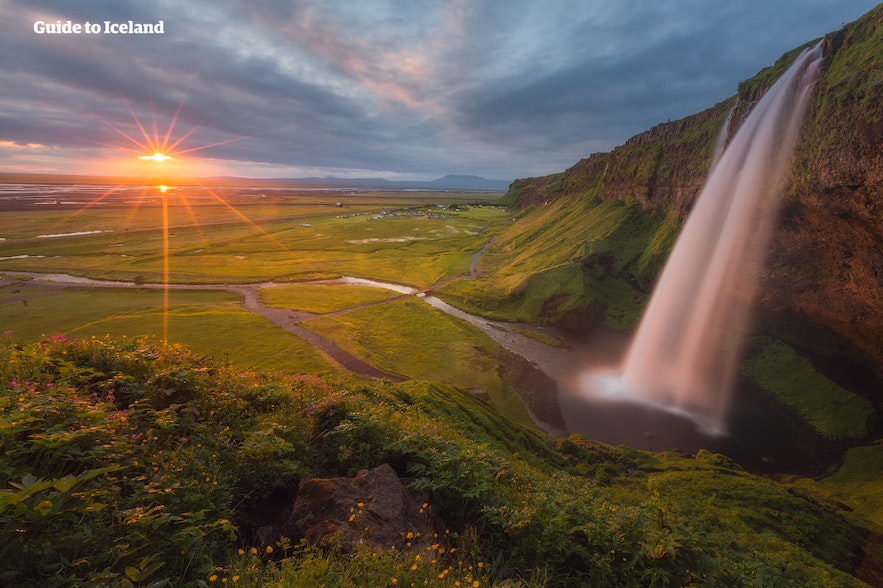 Gluggafoss' proximity to the Ring Road and its main attractions is just one of the good reasons you should visit the place. On its own, Gluggafoss is a hidden gem that's a worthy detour for travelers exploring the Ring Road.

The nearest Ring Road attraction from Gluggafoss is another waterfall, Seljalandsfoss, around 10 miles (17 kilometers) south of Gluggafoss. Seljalandsfoss has a height of about 200 feet (60 meters). Due to its proximity to the Ring Road, it's one of the most visited waterfalls in the country.

From Seljalandsfoss, you can explore other nearby attractions in the South of Iceland.

Gljufrabui is another unique waterfall only a few minutes away from Seljalandsfoss. The waterfall's almost hidden due to its location inside a cave behind a cliff. Due to this feature, those who want a closer look at it should be ready to get wet and pass by some giant boulders.

After seeing lots of waterfalls and you think a change of pace is needed, you can visit a nearby public outdoor pool, Seljavallalaug Swimming Pool. The pool has been around since the 1920s and is one of the oldest in the country. Seljavallalaug doesn't have an admission fee and is open to everyone.

For history buffs, the Skogar Museum is only four miles (seven kilometers) south of the Seljavallalaug and only 28 miles (45 kilometers) from Gluggafoss. The museum has replicas of the different types of Icelandic architecture throughout history.

To the northwest of Gluggafoss waterfall, around 19 miles away, are the Hella caves, near the town of the same name. The caves are made by humans and are historical landmarks of Iceland.

Some believe the caves have been around even before Nordic Vikings started settling in the area.

There are many things travelers can do when they visit the Gluggafoss waterfall, aside from marveling at it.

Photographers, from enthusiasts to professionals, can take beautiful pictures of it. Just take images from a proper distance to avoid getting sprayed by its waters.

By the side of the Merkja river is a beautiful place to have a picnic. Here, you can eat and rest while marveling at its waters and the waterfall cascading in two steps.