Mýrdalssandur is an outwash plain located between the rivers of Kúðafljót, in the east, and Múlakvísl, in the west, both of which carry water down from the glacier, Mýrdalsjökull. Mýrdalssandur has a 35km (22mi) long coastline which includes Kötlutangi, the southernmost point of Iceland's mainland.

Around the year 1000, many farmers set up shop on Mýrdalssandur. By the 15th century, however, most of these farmsteads were abandoned due to violent eruptions originating from Katla volcano. Today, the area is a 700 square kilometre desert of black sand, made up of the deposits from Mýrdalsjökull ice cap and the sudden glacial floods (or jökulhaup) that run from the glacier down to the sea. Evidence of these prior floods can be seen throughout Mýrdalssandur, be it the washed out bridges or the peculiar rock erosions. Even today, farmers close to Mýrdalssandur worry that receding glaciers will cause rivers to change direction and overflow. It’s no wonder Icelanders left this region a long time ago.

The barren landscape of Mýrdalssandur has done much for folklore and superstition, with many still claiming (albeit, with a twinkle in their eye) that the black sand desert is haunted by ghosts and witches. Birdlife and arctic foxes are a relatively common sight in the region.

There are a number of attractions to preoccupy oneself with in Mýrdalssandur. At the beginning of the western edge, visitors can head to Sólheimasandur beach to see the famous Navy DC plane wreck. The plane crashed in 1973 after the pilot, incorrectly, assumed the plane had run out of fuel. Still, he managed to land the plane on the black sands with no casualties. The plane wreck still exists today and makes for a great stop for photographers.

Roughly 15km east of Vik, visitors will arrive at the inselberg mountain, Hjörleifshöfði. Rising 221m (725ft) above sea level, Hjörleifshöfði was once an island though by the time of the settlement of Iceland, it was already connected to the mainland. Today, it offers a well-paced trail hike with sweeping views across the Mýrdalssandur region.

Driving across Mýrdalssandur will take approximately an hour, with stunning views of Vatnajökull glacier and regular picnic stops. Recently, Mýrdalssandur was used as a filming location for the opening scenes of Star Wars: Rogue One, depicted as the planet Lah’mu. 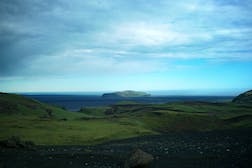 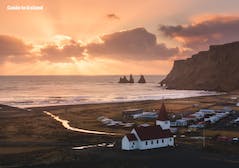 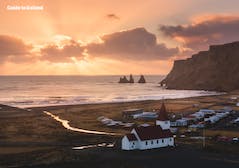 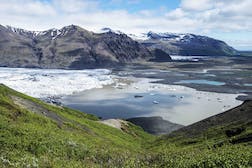 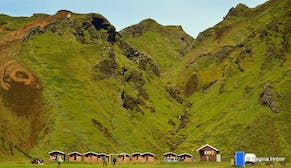