Víti is an explosion crater in the Krafla fissure area of North Iceland.

The best way to explore this crater is on a tour in North Iceland. In particular, this tour of Askja Caldera and Viti Crater.

It is one of the two most famous Víti craters in Iceland, the other being Víti in Askja. The name of both means’ hell’, in reference to the violence in the past.

This particular Víti was formed in 1724 by a massive eruption in part of the Krafla volcanic region. This event lasted, in its entirety, for five years, and was called the Mývatn Fires. Jets of lava shooting in the sky were said to have been visible from the South Coast.

The 18th Century had several major eruptions throughout the country, including the notorious Laki, the ash cloud of which plunged Europe into famine.

The diameter of the crater is around 300 meters; it is much better known, however, for the aqua blue water that sits within it year-round. This vivid colouration is due to elements brought up from the geothermal activity in the area.

Like other explosion craters in the country, such as Hverfell, Víti in Krafla was formed by a sudden, powerful ejection of magma from right beneath the surface.

The Krafla volcanic area, which is 10 kilometres wide and 90 kilometres long, is one of the most active parts of the country, with at least other twenty eruptions since settlement. This is comparable to other notorious volcanoes like Hekla and Katla. Krafla sits on the Mid-Atlantic Ridge and is what provides the popular Lake Mývatn Region with popular attractions such as its hot springs, lava fields, and other craters.

One of Iceland’s most beloved poets, Jonas Hallgrimsson, wrote the poem ‘Víti’ inspired by the crater, which was later set to choral music by Icelandic composer Jon Leifs. This impressive piece now has a record performed by the Icelandic University Choir.

Víti can be easily visited on tours from Akureyri and Mývatn, although usually only in summer. Some operators include it in their Diamond Circle sightseeing tours.

Popular Tours to Víti in Krafla 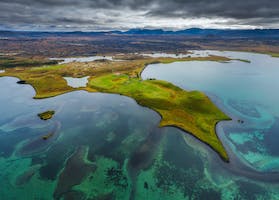