Photo above from Wikimedia, Creative Commons, by Ilya Grigorik. No edits made.

Askja is a popular destination for hikers, with mountain huts to reside in, although it can only be accessed in summer with a four-wheel-drive vehicle.

Askja was not known as a feature of note throughout most of Iceland’s history; it would only gain significant attention in 1875 when it erupted with great force and poured poisonous ash across much of the East Fjords; this ash reached as far as Poland, to give some idea of the scale. 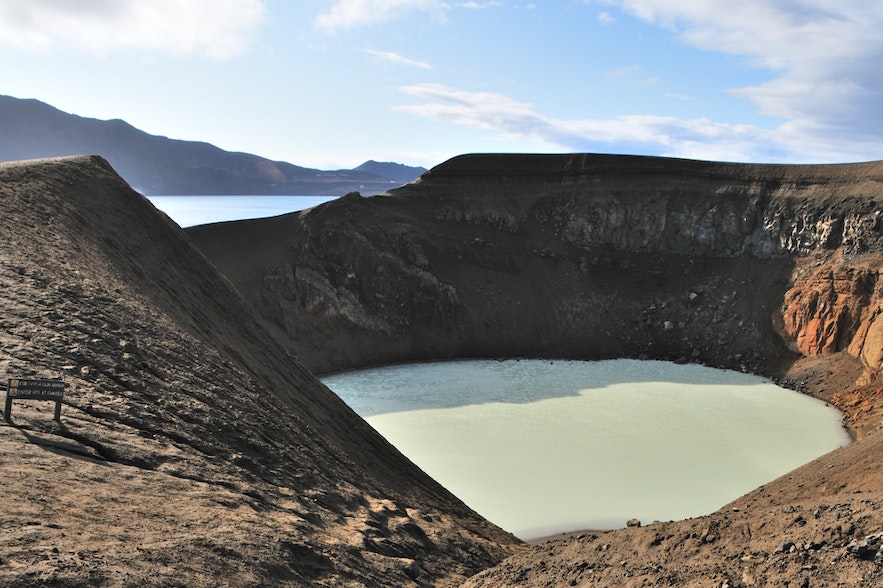 Photo from Wikimedia, Creative Commons, by Ulrich Latzenhofer. No edits made.

This lake was formed after the 1875 eruption and covers an area of twelve square kilometres (about five square miles). It is frozen the majority of the year, and if unseasonably liquid, a worrying sign of a potential eruption.

The Apollo scientists were far from the only ones to come to Askja, with it attracting meteorologists, geologists, and volcanologists for decades. In fact, before the astronauts came, Askja had already claimed the lives of two people studying it.

In 1907, two scientists from Germany, Walter von Knebel and Max Rudloff, were studying the volcano and took a boat journey out onto the surface of Öskjuvatn. They would never return, nor would any sign of them be seen again, in spite of the hard work of von Knebel fiance, Ina von Grumbkow.

A study taken that year in the caldera revealed what effects a landslide can have on the lake. When displaced earth struck its surface, it caused a wave 30 metres (98 feet) tall. Any small boat in its path would have been completely shattered, and it is little wonder why no sign of them has ever been found.