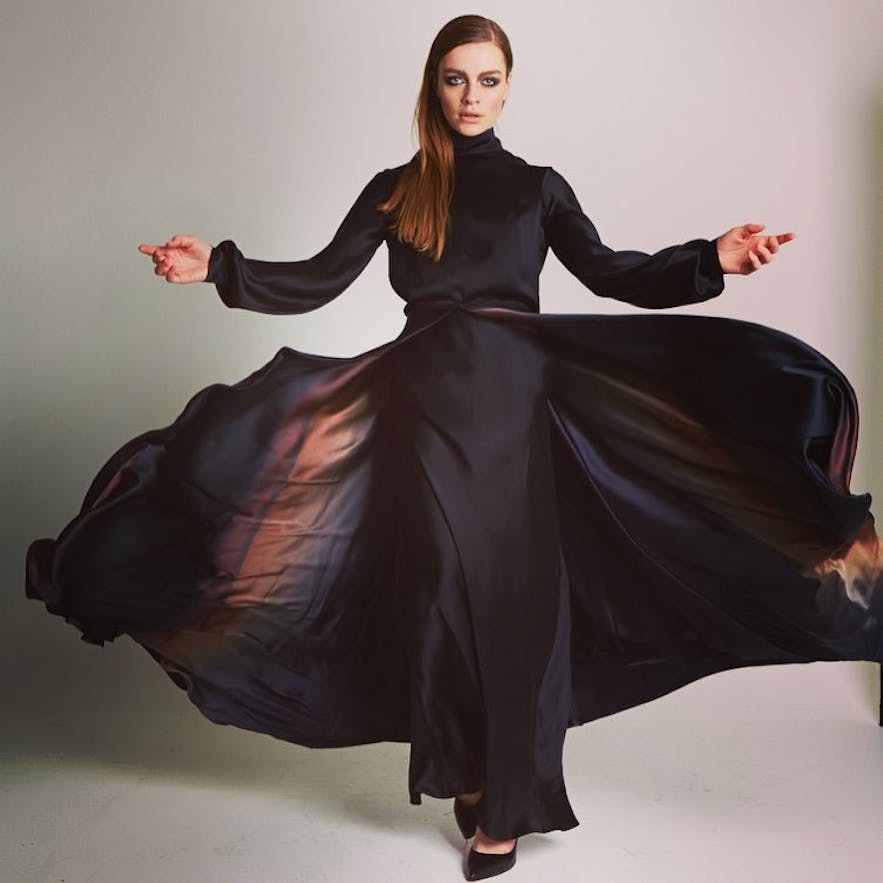 What do people wear in Iceland? Is it all woollen sweaters and rubber boots? Or does the famed creativity of Icelanders extend to their clothing, as well as their design of said clothing? Read on and get to know the ins and outs of Icelandic clothing and fashion design.

For many people, the phrase “Icelandic clothing” instantly brings to mind the iconic woollen sweater. From its humble beginnings as everyday wear for farmers huddling from the elements in the dark of winter, it has grown in stature and fame to become a defining piece of clothing for people of the island and beyond—stylish, rugged, and appropriate in almost any situation.

But Iceland has a great deal more to offer than just the (admittedly lovely) woollen sweater. Take a small glance beneath the surface—or, even better, a short stroll through downtown Reykjavík—and you will discover a variety of beautiful and inventive designs for every occasion. To assist you in navigating this wealth of riches, here is our list of Iceland’s 11 most notable design houses. 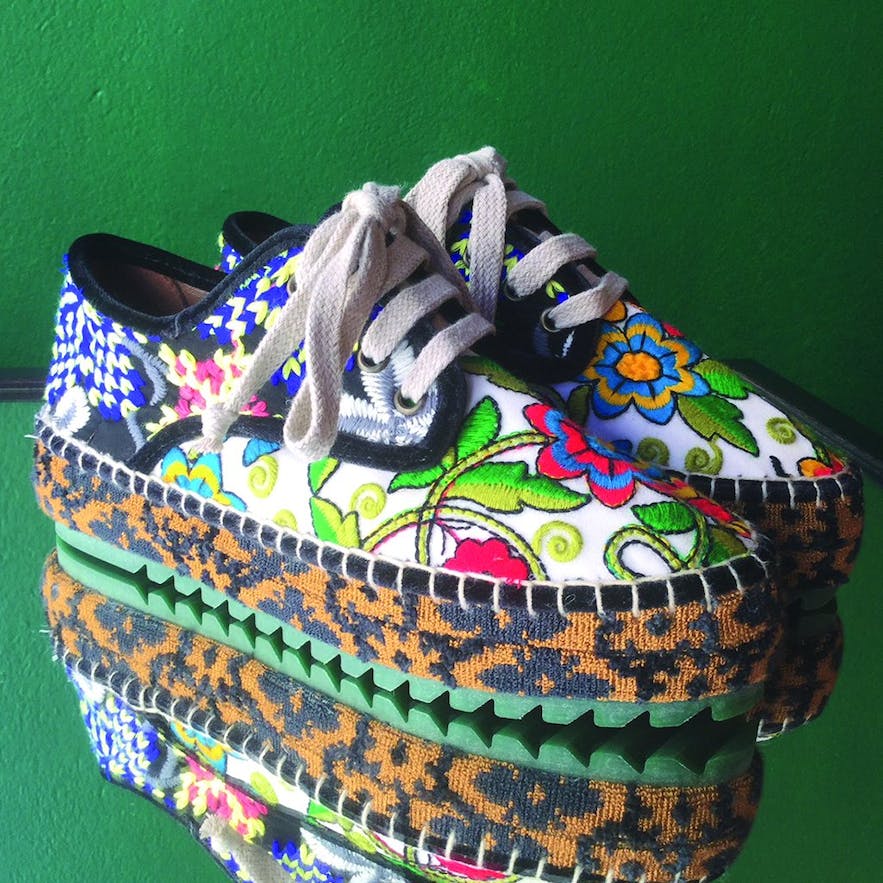 Though they make a wide variety of women’s clothing, including dresses, shawls and leggings, the husband-and-wife team that make up Kron are known primarily for their shoes. Their colourful, often floral patterns and intricate craftsmanship make their work instantly recognizable, and they’ve received worldwide acclaim for their one-of-a-kind aesthetic and the consistent quality of their output.

Launching in 2008, they gained instant recognition for their vibrant style, their attention to detail and their original ways of combining fabrics and textures. Defying tradition and going their own way, they immediately marked the course that would lead them to where they are today… and what a place it is. 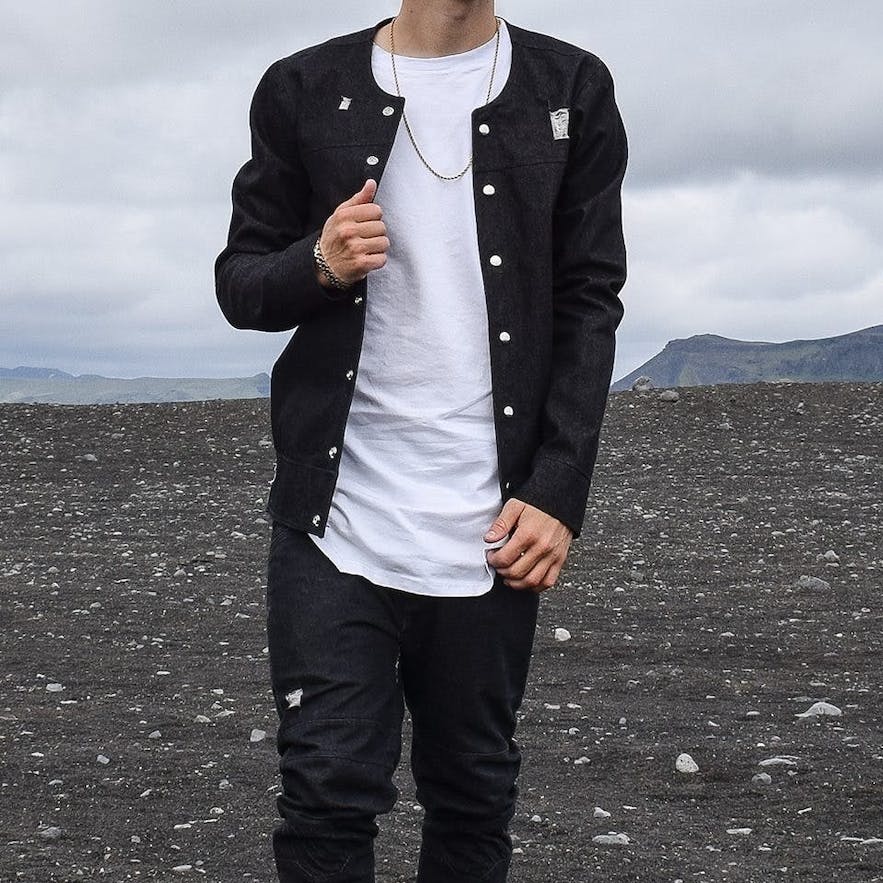 The first pure streetwear brand to come along in Iceland, Inklaw was started in 2013 by two friends who admired the contemporary hip-hop style of dress but found precious little of it in their local shops.

Entirely self-taught, they launched into experimentation, initially distributing simple designs to their friends, but soon expanding their influence through tireless productivity and social media marketing.

Today, while they do enjoy a fair bit of attention within Iceland, particularly among hip-hop heads, Inklaw has primarily cemented themselves internationally; the brand has gained acclaim with a wide variety of celebrities, such as Justin Bieber, Steve Aoki and Migos, as well as several NBA players.

Each piece is minimalistic and made by hand, often incorporating spray paint in the designs, and with the sleek modern designs on offer, it’s no surprise that Inklaw’s become a smash hit with people in the spotlight. With their brand rising rapidly, it’s safe to say this talented team of young designers is only just getting started.

Inklaw has no physical boutique in Iceland, but their clothing can be purchased through the Inklaw Website. 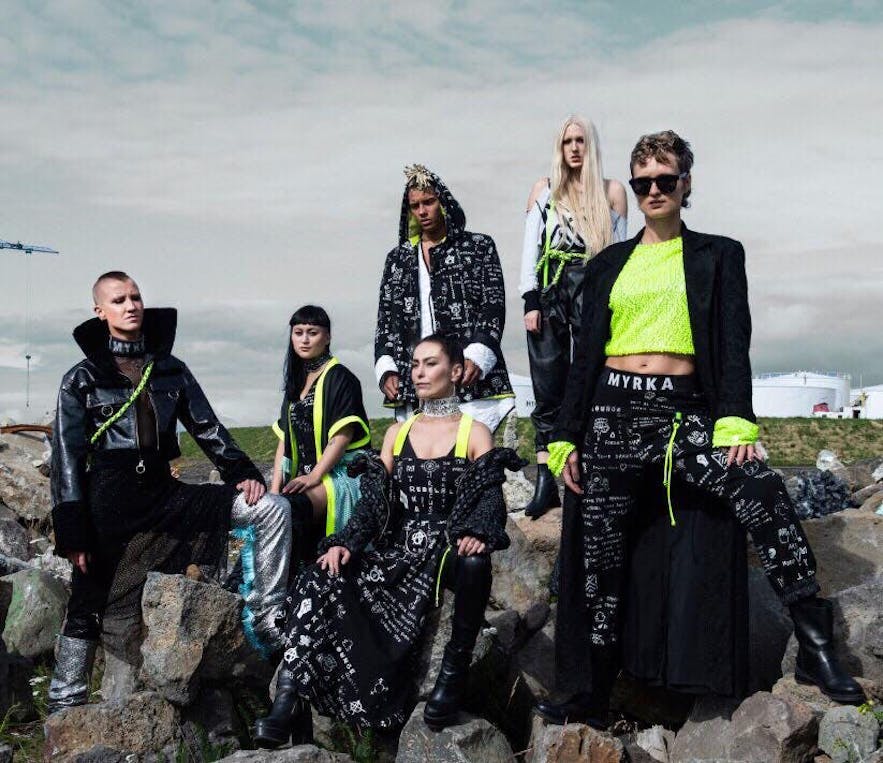 Founded on the twin precepts of rebellion against establishment and expression of pure individuality, Myrka can best be described as an artistic, high-end streetwear label.

Incorporating an anti-trend, socially conscious platform married to a minimalist yet outré aesthetic, the designs tend toward monochrome, combined with subtle touches of contrasting colour.

Inspired by Icelandic folk tales and mysticism, Myrka also wonderfully evokes the contrasts of Icelandic nature, given the juxtaposition of textures and colours on display. And, since mass production is the furthest thing from their philosophy, each piece is handcrafted, labelled and numbered—yours to keep, and no-one else’s.

In KIOSK, you’ll be able to purchase Myrka streetwear. 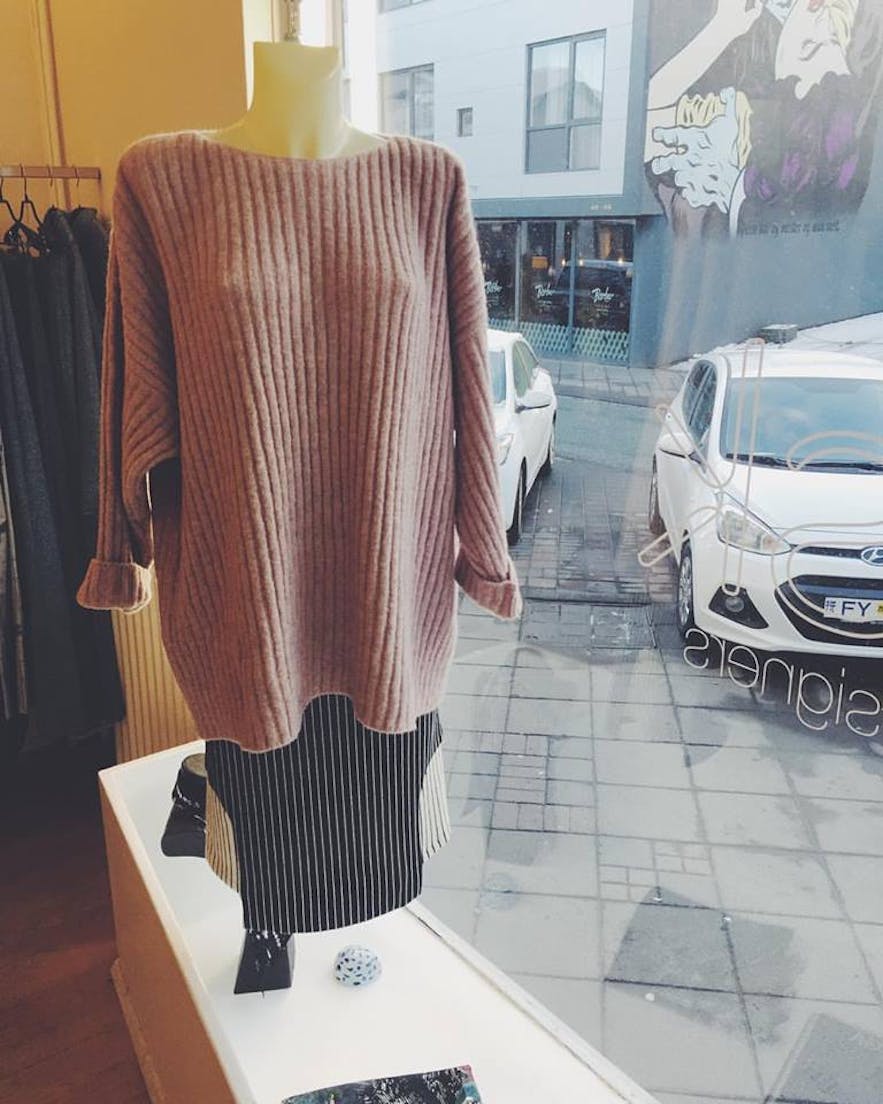 KIOSK has become something of an institution on the Reykjavík fashion scene. Co-owned by four Icelandic designers, each of whom takes turns behind the counter, it is an elegant boutique filled with premium designs from a carefully curated set of labels.

On offer: a wide variety of dresses, sweaters, shirts and trousers, mostly skewing female, but sporting some unisex pieces as well. 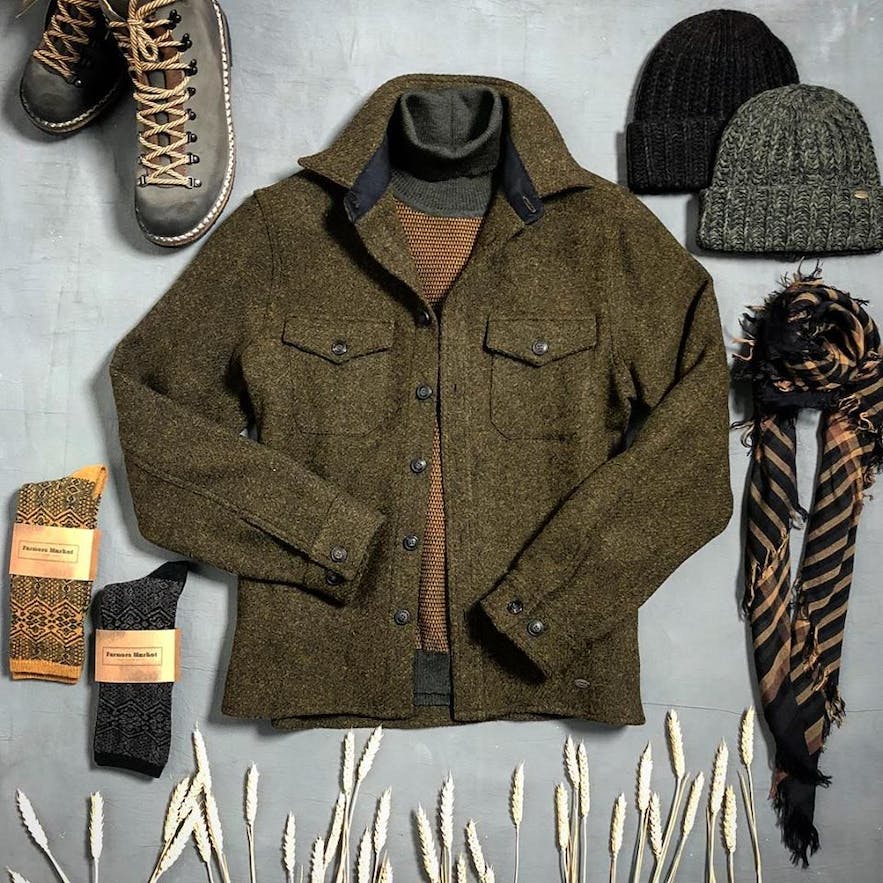 Started in 2005, Farmers Market (known to most through their store names, “Farmers and Friends”) is a parade of contrasts: according to their own manifesto, they position themselves “on the crossroads between past and present, national and international, country and city.”

True to that creed, they are a fascinating combination of new and old, mixing classical Nordic design themes with more modernist touches.

Their choice of fabrics is old school, with a focus on sustainability, and their entire aesthetic—right down to the environs in their two boutiques—is charmingly rustic, with wood and wool featuring prominently.

Their textiles are always prime grade, not just Icelandic but from places as far-flung as India and Australia. With their uncompromising attention to detail and quality, this is one design house you won’t regret shopping with—and regardless of what you get, you’ll most likely own that garment for the rest of your days. 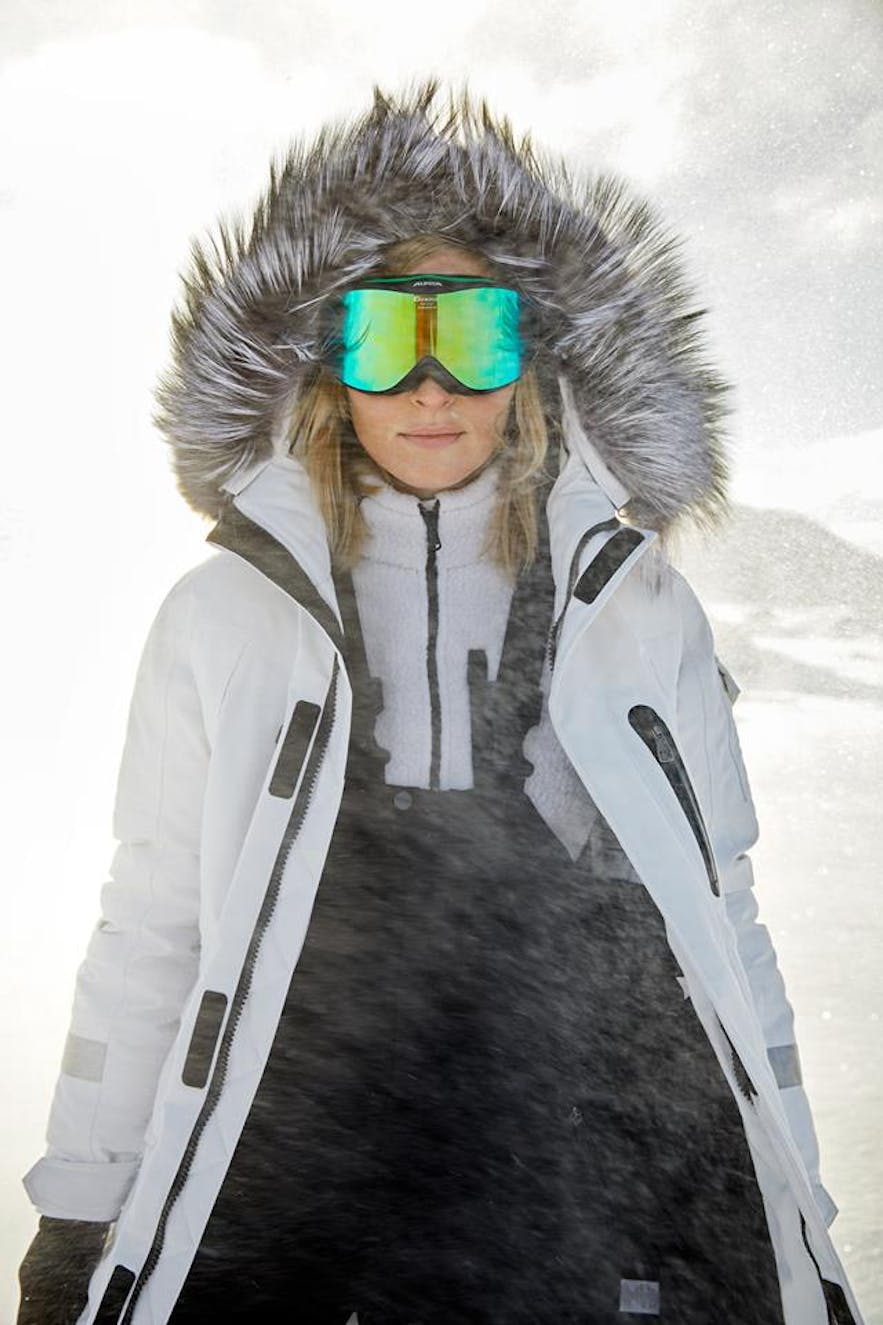 The wizened grandparent of Icelandic clothing design, 66° North is long established as a premium purveyor of high-end outerwear. Founded in 1926 in Reykjavík, the company originally provided fishermen with the rainwear they needed to withstand the buffeting fury of the Northern oceans, but it’s grown several nautical miles beyond that by now.

Over the course of the near-century they’ve been in existence, the company has been active and alert, constantly adapting their production to incorporate the latest in textile technologies for their varied high-end lines of technical wear.

If you’re doing anything at all outside of the capital, they will serve you well. It’s a tad on the pricey side, but with 66° North, you always get what you pay for. 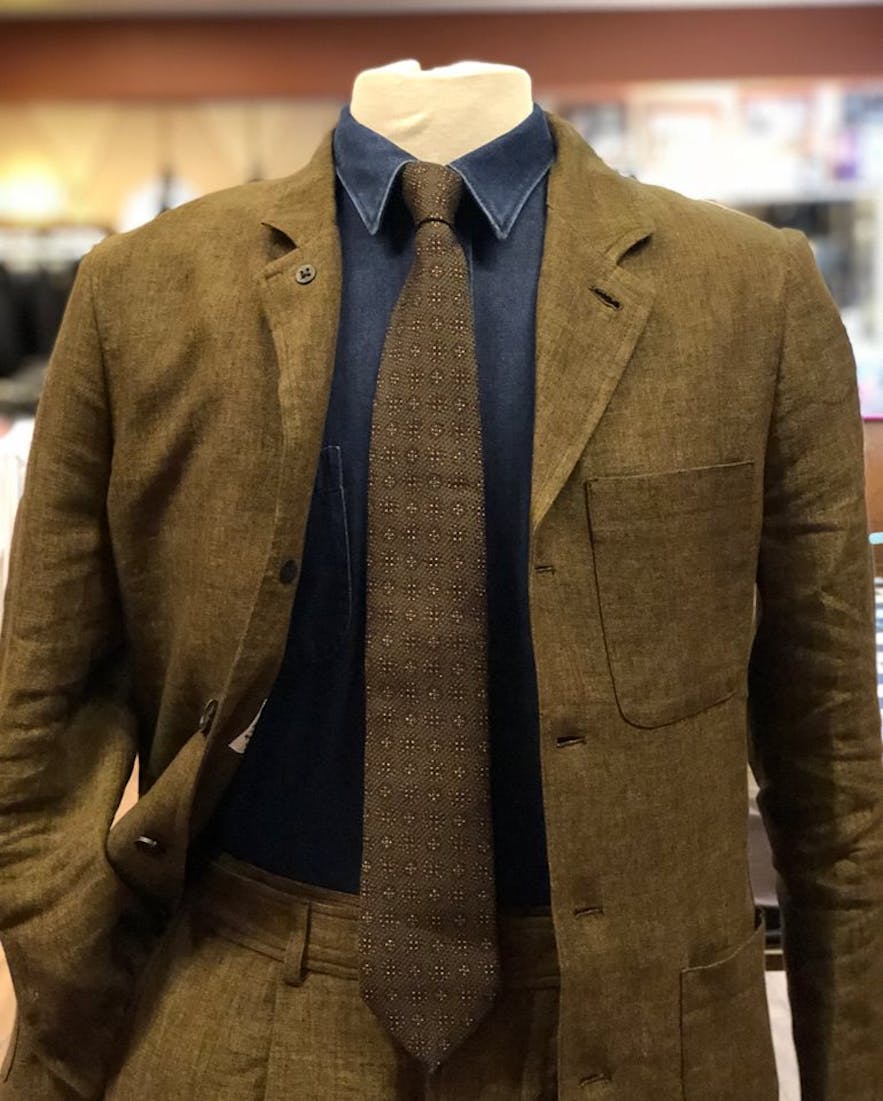 Another institution, Kormákur & Skjöldur have long ago ensured that in the hearts and minds of any even remotely traditionally fashion-conscious male in the greater Reykjavík area, they are the one, the only and the ultimate. And with good reason: entering the store itself is like a rite of passage.

Your best bet is to just spin in a circle, point at something and have someone bag it up for you. In this place, you can’t possibly go wrong. 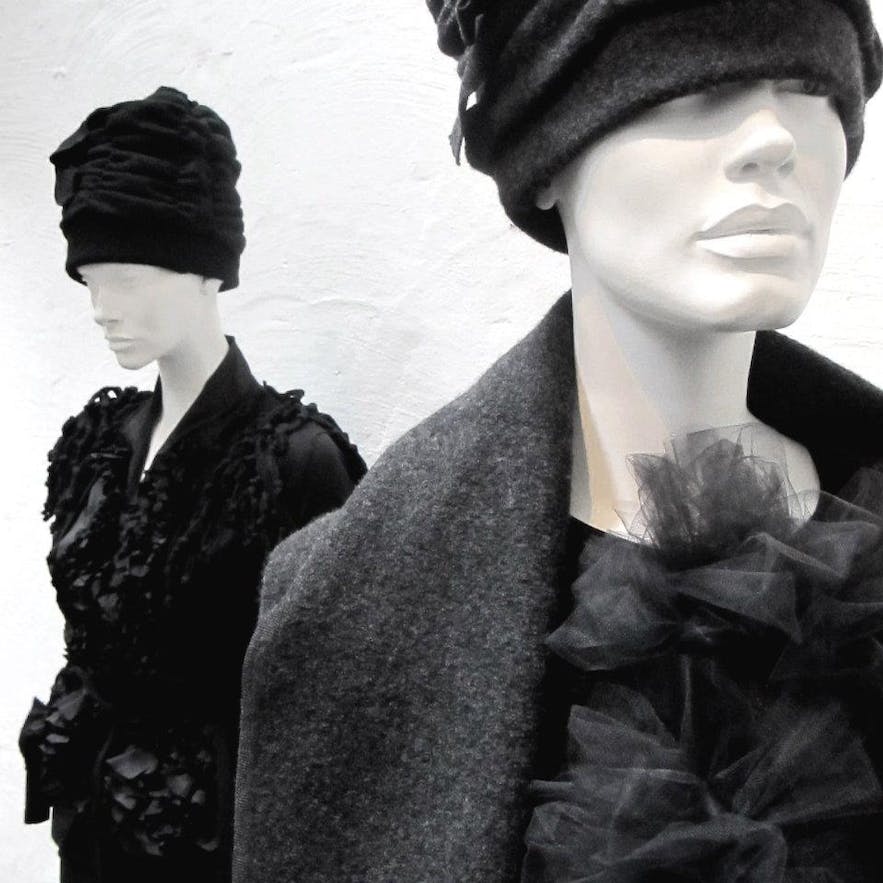 In a design landscape that already tends to draw heavy inspiration from the country’s actual landscape and culture, STEiNUNN’s nature influence is possibly the most striking.

This is evident in the names of her collections (“The Lava Glass Collection” and “The Black Snow Collection” among them), but also in the flavour of her designs: Knitwork is prominent, and she often uses traditional Icelandic fabrics with inventive modern twists.

Since coming onto the scene in 1986, she has won over 15 international awards in addition to giving dozens of lectures and exhibitions. One of the most celebrated designers in Iceland’s history, her boutique is another must-visit. 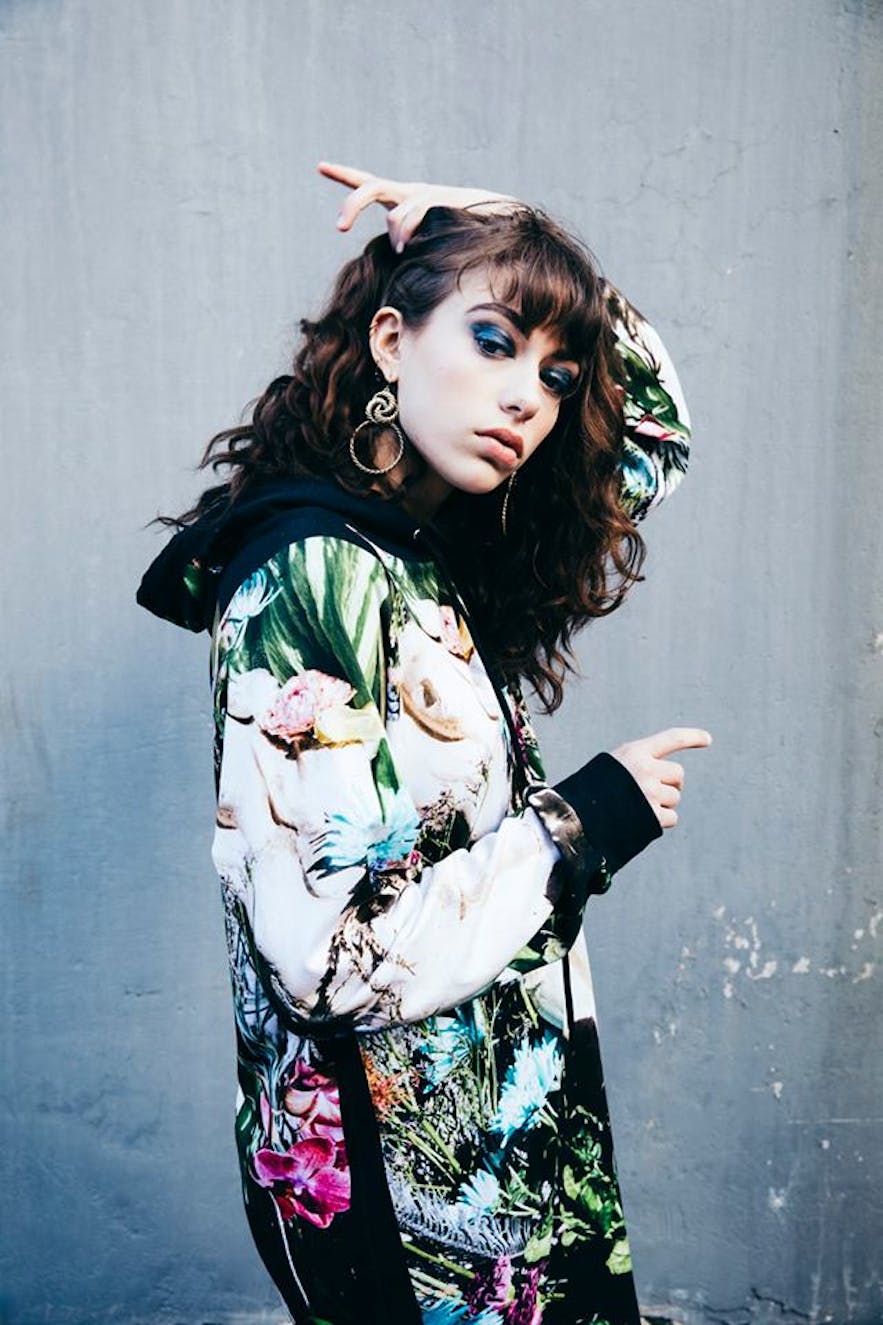 Another of the scene’s biggest stars, Hildur Yeoman is known for her frequent and distinctive use of imagery, with pictures—sometimes even photographs—featuring heavily in her designs.

Though she is known primarily as a fashion designer, the essence of her work is found in these visual elements, and a case could legitimately be made for her being a visual artist first and foremost, just one who happens to specialise in clothing.

Her boutique, which opened in 2017, features a number of other designers’ work in addition to her own. It’s not limited to clothes, either; along with beautiful garments of many types, the shop offers a variety of goods, including jewellery, shoes, lingerie and various interesting trinkets and ornaments. 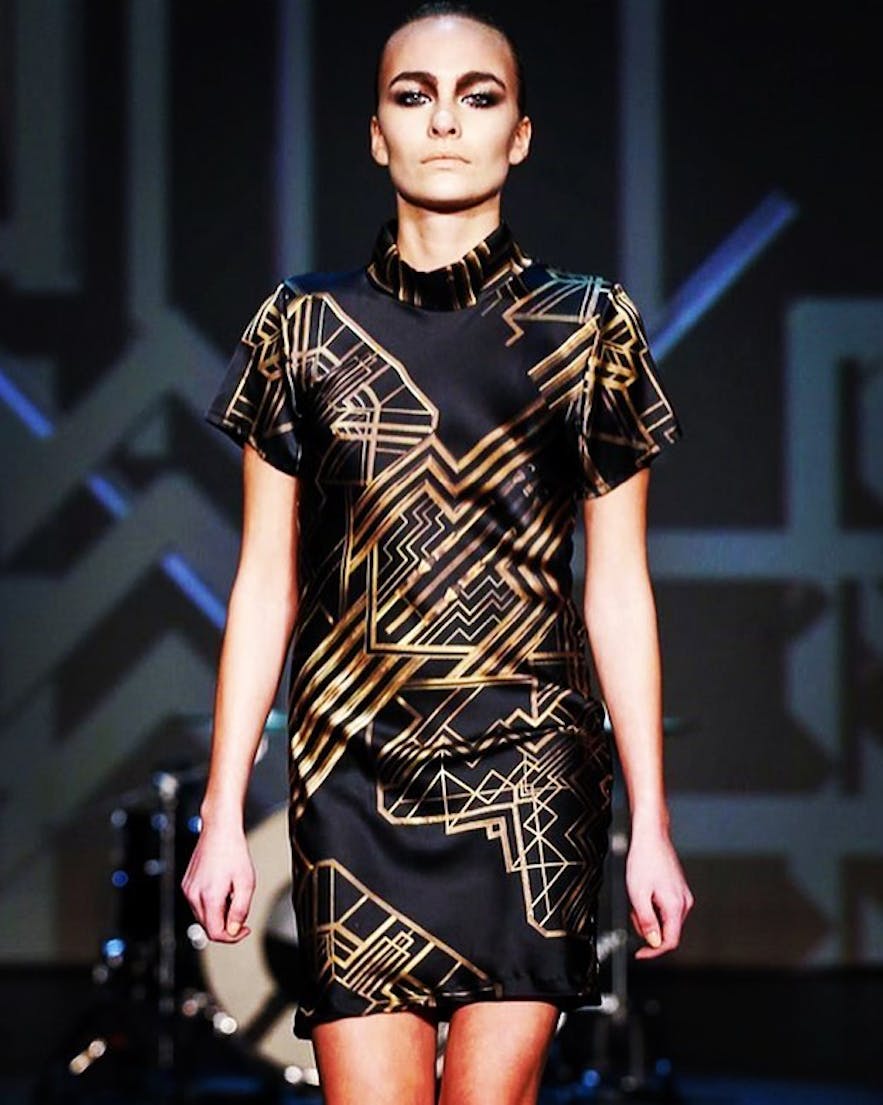 One of Iceland’s most innovative and forward-thinking design outlets, Another Creation offers personalised avant-garde high fashion, with the distinguishing element being a sort of modular functionality: each garment has parts that can be removed, mixed and matched, allowing the customer to decide for themselves the final configuration of the piece.

The designs themselves tend towards monochrome and beige, sometimes shot through with veins of gold, favouring more reflective fabrics such as silk and leather rather than earthier textures. Unique among its peers, this house is well worth checking out.

The Handknitting Association of Iceland 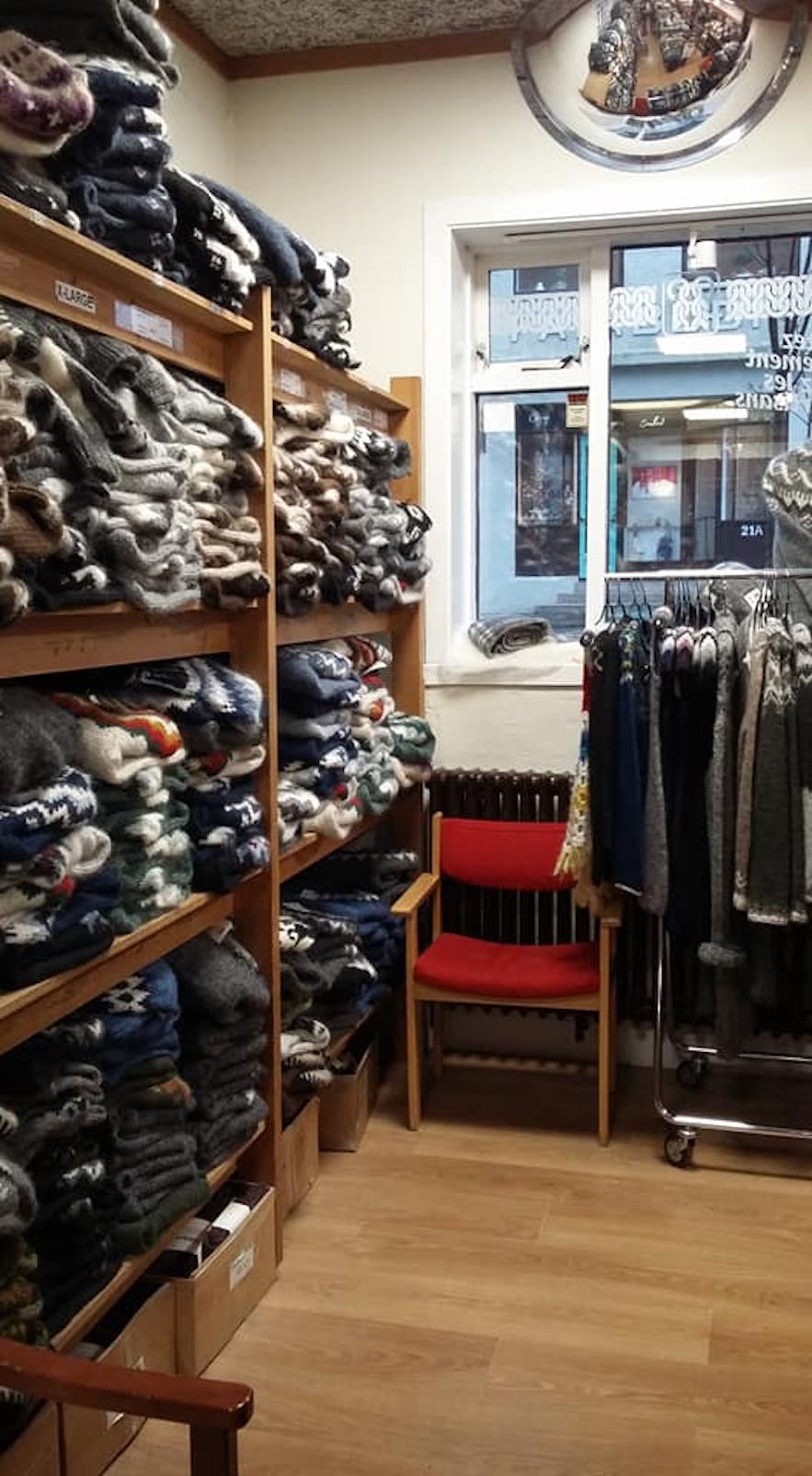 Last but not least, special mention must be made of this small basement shop in the centre of Skólavörðustígur.

It’s a cramped and cosy no-frills space that offers what are very simply the finest-quality traditional Icelandic woollen sweaters you can find (in addition to everything you could possibly need if you want to do some knitting of your own).

Despite the homey environs, it's not a budget shop—a sweater will run you around USD $200, with a tax rebate to the tune of $30—but out of all the expensive things you can get in Iceland, this is one of the best buys you can make.

This is where you will find a beautiful garment that will last you a lifetime, and they don’t make ‘em better anywhere.