Journey Iceland's Ring Road with this guided sightseeing tour, stopping at over twenty major attractions around the country in only four days! This is the perfect tour opportunity for those visitors to Iceland who are short on time, but big on ambition.

This multi-day tour is particularly suited to photography enthusiasts and nature lovers, given the sheer wealth of features that will be ticked off the bucket list. Iceland is a land of mesmerising and eclectic natural beauty; cascading waterfalls, rumbling rivers, snow-capped mountains, creeping glaciers... all this and more awaits the adventure-ready Express passenger.

This tour includes both Iceland's major highlights—such as those attractions on the Golden Circle sightseeing route (i.e. Gullfoss/Geysir/Þingvellir)—as well as some hidden gems, rarely stumbled across by the average sightseer. Thankfully, you'll be covering Iceland's four distinct corners; North, South, East and West, each region boasting its own unique cultural and aesthetic charms.

So don't delay any further. Hurry now and you too can experience the very best Iceland has to offer in only four days with this Express sightseeing tour around the country. Check availability by choosing a date.

Fully escorted 4-day tour in a minibus with an English-speaking guide
3 nights accommodation in the countryside, hotel rooms with shower/wc
3x breakfast + 1x dinner (day 3)
Visit to two national parks
Entrance with towel to the Nature Baths at Lake Mývatn
Boat trip on glacial Lagoon Jökulsárlón
And a lot of very impressive landscape... 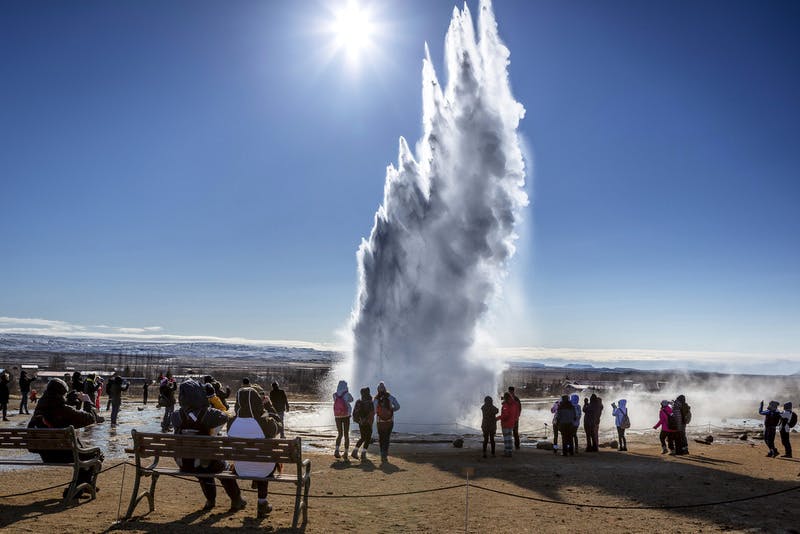 Beginning your morning early at Reykjavík bus terminal, your first day is sure to be jampacked with highlights, with time spent on both the Golden Circle and South Coast sightseeing routes.

Next, you will see the remaining two attractions on the Golden Circle, Haukadalur and Gullfoss. Haukadalur valley is home to two large hot springs, Strokkur and Geysir—the latter of these lent its name to geysers around the world but now lies dormant, whilst the former erupts every five minutes, blasting a jet of boiling water high into the air. You will be equally impressed at Gullfoss water, observing the crashing and cascading water tumble 32 metres into a dark and cragged valley below.

The next stop on your tour is one of the finest attractions on the South Coast, Seljalandsfoss waterfall. Seljalandsfoss is a 60-metre high natural treasure, with room to manoeuvre around the back of the water and thus gain a new, rarely seen perspective. After Seljalandsfoss, you will travel a short distance up the road to Skógafoss, the wider and more powerful cousin of Seljalandsfoss. Here, visitors can creep right up to the point where the water crashes into the rock pool below.

Your first day will conclude with a stop at Reynisfjara black sand beach and the nearby village of Vik, before heading on to your overnight accommodation at Kirkjubæjarklaustur. Reynisfjara is famed for jet black pebbles, dangerous sleeper waves and fascinating basalt rock stacks, built into the cliff face to resemble some dark fortress. 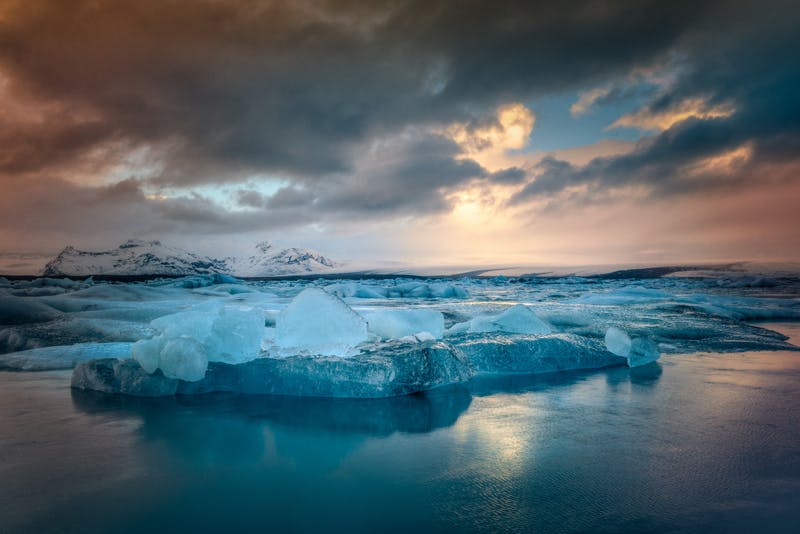 Continuing on, your second day will begin with spending some time in the dramatic and visually stunning Vatnajökull National Park, in the shadow of its namesake, Vatnajökull glacier, one of the largest ice caps in Europe.

Passing by beautiful fjords, black sand deserts and quintessential fishing towns, you will be amazed by just how awe-inspiring Mother Nature can be. You will finally arrive for a stop at Svínafellsjökull glacier tongue before taking to a boat to explore the "Crown Jewel of Iceland", Jökulsárlón glacier lagoon. This crystalline pool is renown for its floating icebergs and playful seal colony, culminating in one of the most beautiful places in the country.

Only five minutes from the lagoon, one can find Diamond Beach, a strip of jet black coastline where icebergs wash up ashore, creating a dazzling visual spectacle. Diamond Beach is particularly beloved by photographers who are hardpressed to find anything else like it in the world.

After a stop for lunch in the town of Hofn, you will continue on to the charming village of Djúpivogur, just one of the many fishing villages you will see today as you journey into the East Fjords. You will be spending the night at an accommodation near Fáskrúðsfjörður. 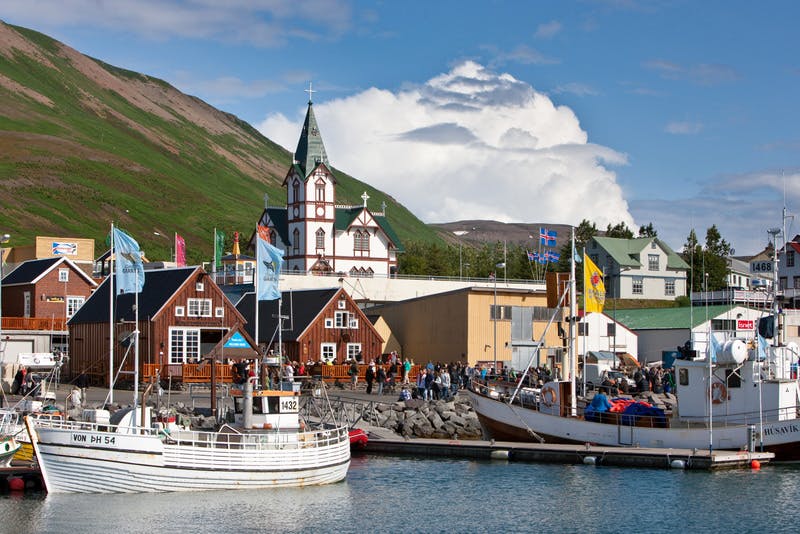 It's your third day and a further 400 kilometres will see you at your overnight accommodation in Húsavík. There is much to see and do in the meantime, however, beginning with a scenic drive to your first destination, the town of Egilsstaðir.

You'll only be stopping here for ten minutes or so as it's on through the uninhabited highlands to Dettifoss, the most powerful waterfall in Europe. This stunning feature is bound to defy the imagination; an immense curtain of crashing, frothy water that seems to fall into a grand abyss below. You spend roughly an hour at this location, walking the cragged paths to and from the waterfall.

The next stop of the day is Námaskarð pass, a geothermal area complete with bubbling cauldrons of mud, steaming volcanic vents and hot springs. After a short stop for lunch, you will then head to the nearby Lake Mývatn, known for its abundant bird life and amazing volcanic lava landscapes. Here, you will visit the pseudocraters of Skútustaðir as well as the lava fields of Dimmuborgir ("Dark Fort").

Before heading off to Húsavík, you will spend one-hour soaking at the relaxing and luxurious Mývatn Nature Baths, a quiet and cheaper alternative to the widely known Blue Lagoon Spa. You will arrive at Húsavík in the early evening, but have the added option of joining a nighttime whale watching tour (if you have the energy), though this is only available in the summer. 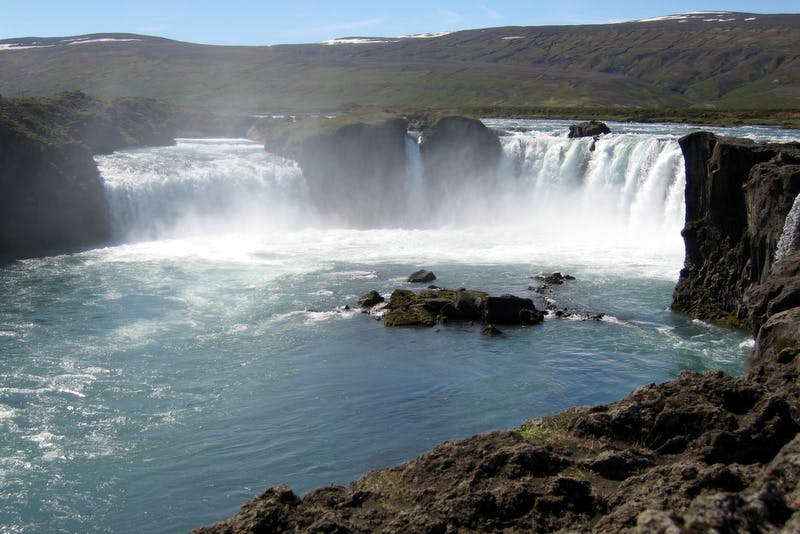 It's the final 500 kilometre stretch of this multi-day tour; you will be leaving Húsavík early in the morning in order to arrive at "the Waterfall of the Gods", Goðafoss.

Goðafoss is a truly gorgeous feature famed for its place in history. According to the sagas, it is said that this is where the early Icelandic settlers threw their pagan idols upon adopting Christianity in 1000 AD, hence the waterfall's name. Either way, this attraction makes for some excellent photographs.

After Goðafoss, you will explore Iceland's northern capital, Akureyri, for roughly one hour, appreciating the town's local culture, charming shops and cafes, as well as the impressive surrounding scenery. Among things to do in Akureyri, one could visit the Botanical Gardens or the architecturally-astounding Akureyrarkirkja Church.

You will then make the return journey to back to Iceland's capital city, Reykjavik, making a stop at the 3400 years old Grábrók volcano crater for a short hike. From Grábrók, you will have fantastic views of the surrounding landscape, as well as gain a real insight into Iceland's geological history.

Finally, you will make one stop at the small town of Borganes where you will, once again, be blessed with some truly stunning vistas, encompassing farmland, open ocean, distant mountains and rugged fjords. You will arrive back at Reykjavik bus terminal in the early evening.

There is a possibility that some of the nature attractions around Iceland might charge an entrance fee during the trip. These entrance fees are not included in the tour price and need to be paid by all tour members additionally on the spot, when entering any of these nature sites. Locations, amount of entrance fee, form of payment and other details are not known at the present time and are subject to change.