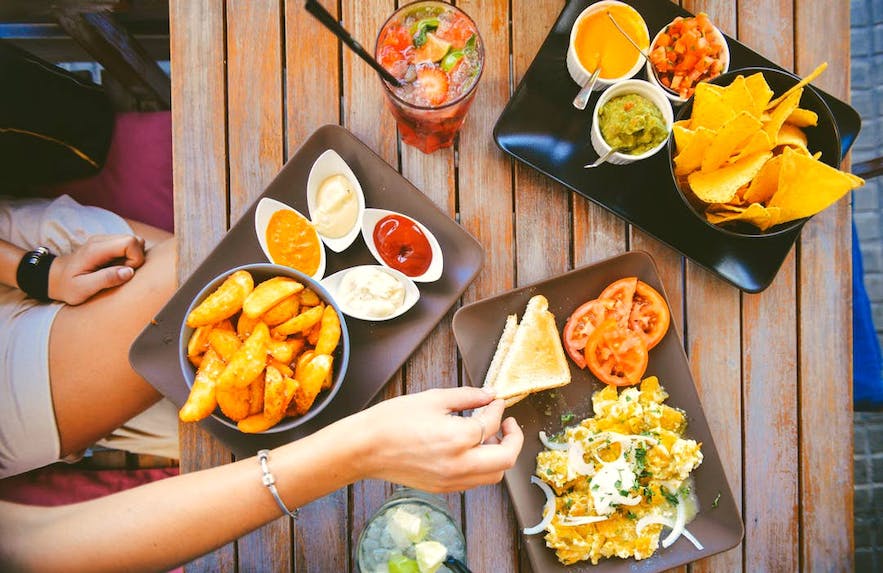 Being an island with an extremely small population which relies heavily on imported goods and raw materials, Iceland is a relatively expensive place to visit.

Thankfully, eating cheaply in Reykjavík is more than possible, though it does take some navigating and prior knowledge of where the best deals are to be found.

If you’re on a budget or, hell, just broke, there are still some eateries in the capital that balance delicious menu options with affordable prices.

These options will certainly help you enjoy your stay in Reykjavik without becoming lightheaded with hunger.

Reykjavík has something for everybody, particularly traditional icelandic cuisine. It however won’t cater for you if your favourite dining establishments happen to be McDonald's or Burger King which are nowhere to be found in Iceland.

International cuisine is prevalent and varied whilst traditional Icelandic food is readily available and authentically prepared.

If fine dining isn’t your cup of tea, the numerous street vendors will surely tempt you with an easy to prepare snack without pulling too hard on the purse strings.

Check out our hand-picked suggestions for the top 10 best value places to eat in Reykjavik below. 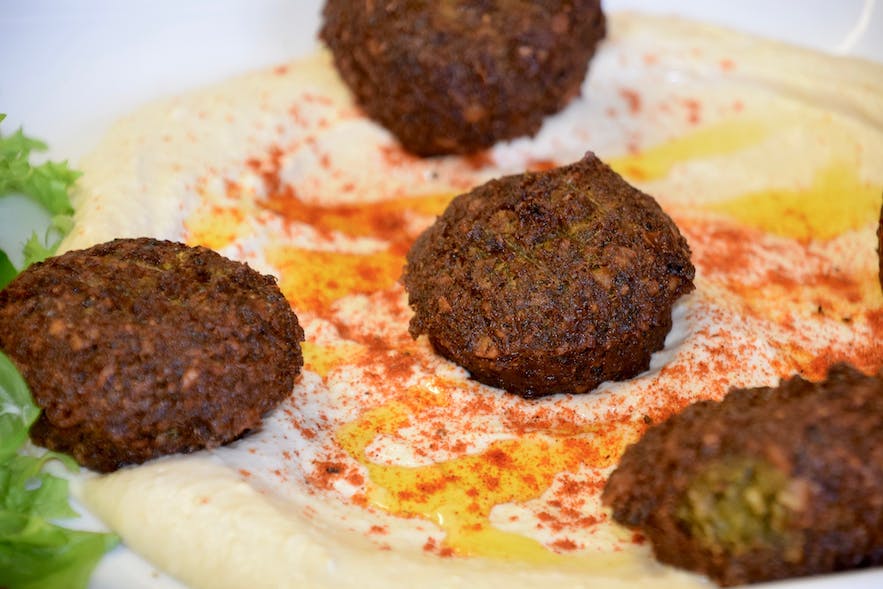 Mandi is a corner shop and small restaurant in the centre of Reykjavík, with a menu designed for the traveller on a budget.

Since opening in 2011, it has consistently delivered on its promise to provide authentic Syrian food for a reasonable price.

It serves a wide range of shawarma, falafel and hummus dishes that are affordable, filling and delicious.

There is some casual seating within Mandi, but meals can also be ordered to go.

The family-run business has a reputation for warmth and hospitality, in spite of being a small fast-food venue.

It also caters for larger groups for great value, making it a perfect place to consider for those having a wedding, party or similar event in Iceland’s capital.

No doubt due to its centrality in the city, Mandi tailors much of its business to those spending a night out on Reykjavík’s bustling bar scene.

As such, it is trendy amongst locals, who know it as a reliable place to fill the stomach and stave off a hangover.

Because of this, however, it is not always open during the day, so check the opening times below to ensure you don’t miss out on your affordable and sumptuous falafel wrap or chicken shawarma. 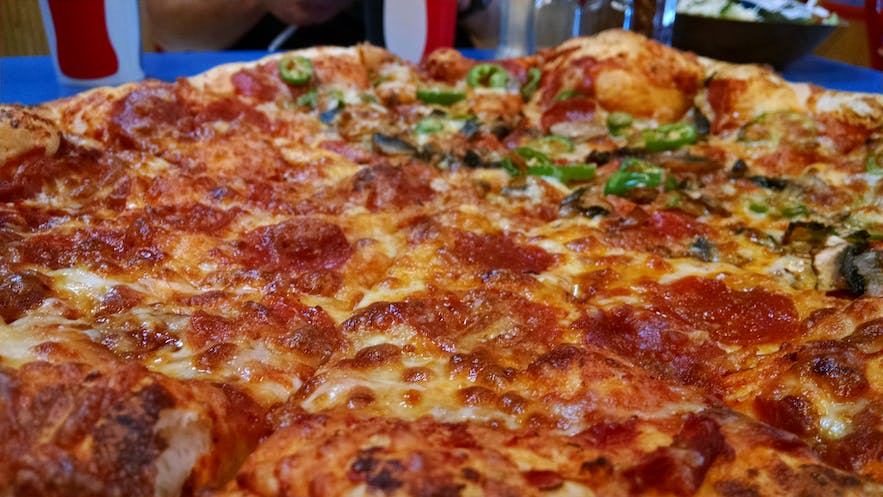 Devito’s first opened its doors in 1994, offering the people of Reykjavík their chance to indulge in quick and easy, delicious pizza slices.

Back in the day, Devito's was housed in an outside compartment only a few square metres in size, providing just enough room to shield their customers from the harsh Icelandic elements.

Ten years later, in 2004, Devito’s moved only a few metres up the road into its current premises at 126 Laugavegur, just off Hlemmur Square.

Advantageously situated in the direct eye line of the city’s commuters, Devito’s does a healthy business, especially on the weekend nights when patrons sit inside in a hungry bid to sober up.

This choice is not quite to the glorious standards of Ban Thai, but cheaper, and therefore has earned itself its place at the end of this list.

Having lived on a Thai island for a few months, I hold a special place in my heart for the country’s delicacies and, I must say, Krua Thai does not disappoint.

One of the best things Krua Thai offers is a large variety of menu options. Patrons can choose from classic dishes like Thai-styled Panang, Pad Thai, Tempura and spicy noodles.

The restaurant also has takeaway and delivery options and happily accepts walk-ins without prior booking.

Given the reviews, and my own personal experience, of course, Krua Thai has an excellent reputation for its friendly customer service. 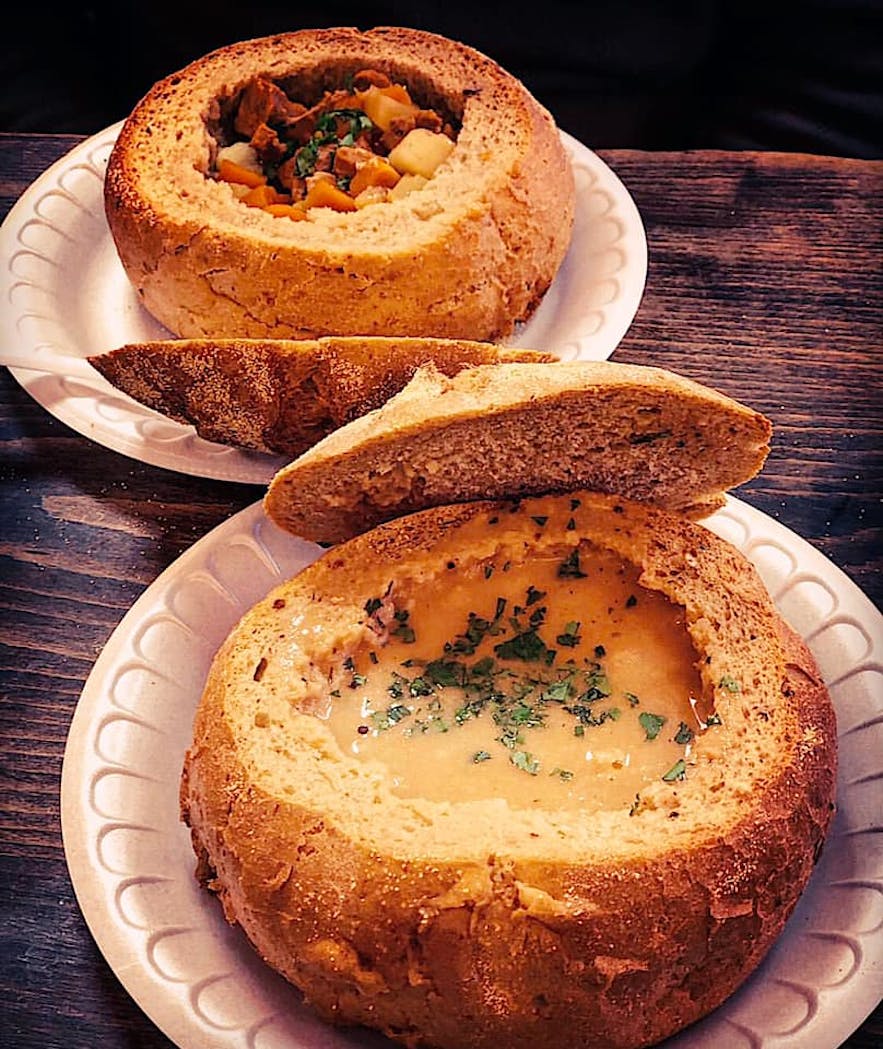 If you're looking for a taste of Iceland, there's no better place for affordable local cuisine than Icelandic Street Food.

The casual-feeling restaurant's claim to fame is being the first place to serve traditional Icelandic food with the approach of fast food restaurants.

The menu is simple but you can't go wrong, whatever you order. They serve their scrumptious traditional lamb-soup and shellfish soup in bread-bowls, making them quite a filling meal.

You can also choose their tasty fish-stew with rye-bread on the side, which is about as Icelandic as a dish can get.

As a sweet treat, they serve typical Icelandic pancakes and hjónabandssæla, a cake whose name translates to: Marriage Bliss.

Icelandic Street Food is a family-owned operation, which adds to the authenticity of the culinary experience.

They even use recipes from the founder's Grandmother, and Icelanders know there's nothing as delicious as food made by an amma (the Icelandic word for grandmother).

The restaurant is also in an extremely convenient location, downtown. It is within walking distance of all Reykjavik city-centre attractions.

But you don't have to walk far for drinks and entertainment after your evening meal. Conveniently, right next door to Icelandic Street Food you'll find the Icelandic Craft Bar, where you can try some excellent craft beers. Afterwards, you can then head downstairs to the Secret Cellar comedy club, which has free comedy shows every night of the week.

Icelandic Street Food is a lovely spot for lunch or dinner or even a tasty treat between meals. You'll be hard-pressed to find local delicacies of this quality at the same reasonable price anywhere else in the capital. 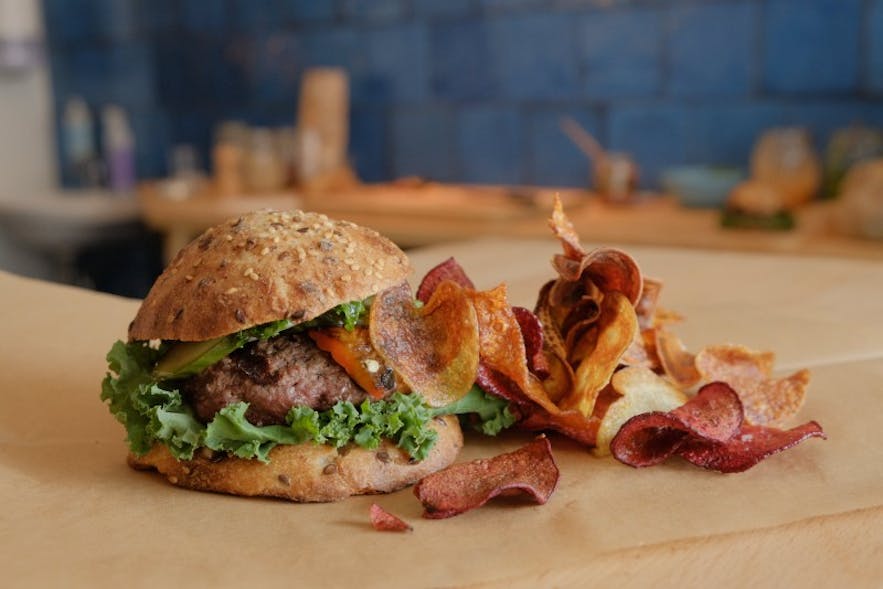 Unlike other fast food outlets across the city, however, Bio Borgari specialises in offering a healthier alternative, using only products that are either organic or have been sustainably farmed.

In 2015, two cuisine-loving brothers, Vífill and Ýmir, went looking to find a location for their new burger restaurant.

Two years on, the brothers’ commitment has paid off, with a new Reykjavik restaurant now formally opened for business.

In true organic style, the brothers were responsible for almost every aspect of the new establishment, from the ingredients used and the cooking methods, to the restaurant’s interior decoration.

This attitude towards health and entrepreneurship comes from the brother’s childhood; "Using ingredients grown organically, for us, is the default way to show nature and the resources that Mother Earth has. We can not just take, we must also give back so we can create balance, be constructive and live in harmony with the environment.”

Grandi Mathöll is a street-food hall in the funky Old Harbour district of Reykjavík.

It prides itself on its diversity of dishes and the authenticity of its traders and seeks to rejuvenate Iceland’s street-food industry.

At Grandi Mathöll, you can get everything from traditional Icelandic lamb and smoked meats to Vietnamese delicacies, revitalising soups and juices to gastro-style takeaway food.

There is also an ever-changing pop-up truck, where up-and-coming chefs with a passion of street-food bring a brand new flavour to the hall.

There is a range of prices throughout Grandi Mathöll, though most are very reasonably priced for Reykjavík.

The food hall is particularly recommended to groups and families with a diverse range of dietary desires or requirements, as no-one will have to compromise and everyone can grab a plate from their favourite menu. 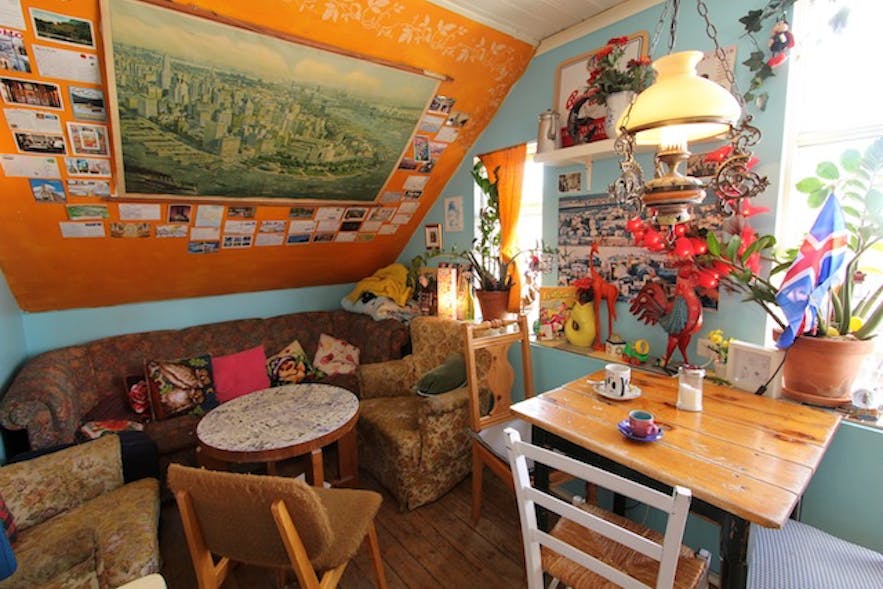 Café Babalu is known for many things; its eccentric and eclectic interior decor, its surprisingly delicious cheesecakes and its hospitable staff and atmosphere.

The cafe has two levels, leaving plenty of seating room. The decorations do, however, make the establishment appear smaller than it is, leaving a cozy, some-might-say claustrophobic, atmosphere.

Café Babalu is instantly recognisable from its bright yellow paintwork, artistic exterior and its second-floor balcony.

People travelling to and from the Hallgrímskirkja church, Reykjavík's most iconic landmark, will almost certainly pass it, making it an excellent stop off for a light lunch.

One drawback of Cafe Babalu often cited is its small menu. Visiting the cafe more than three times during your visit will most certainly exhaust it. However, that’s not to say your enthusiasm will diminish.

Quality over quantity, after all. Cafe Babalu is also known as an LGBT-friendly cafe; the owner Glenn Barkan opened the cafe in 2004 after moving to Iceland to marry his long-term boyfriend. 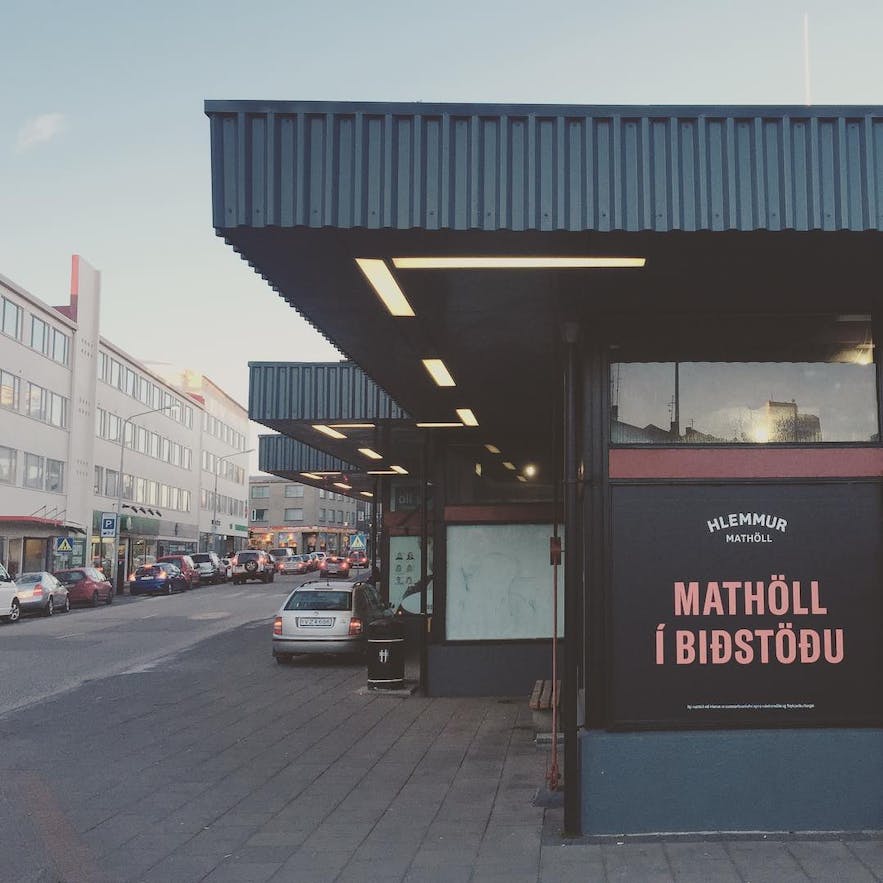 Hlemmur Square is the central bus station of Reykjavík, and for years the space was barely utilised.

Finally, in 2017, a long-awaited food hall was introduced and met with great enthusiasm: Hlemmur Mathöll.

Hlemmur Mathöll provides a range of different flavours from ten different vendors, much of which can be bought at a reasonable price.

If travelling on a budget, you are likely to be using the bus service anyway, so why not break up your travels with a delicious bite to eat, with vendors tailoring to all members of your party? 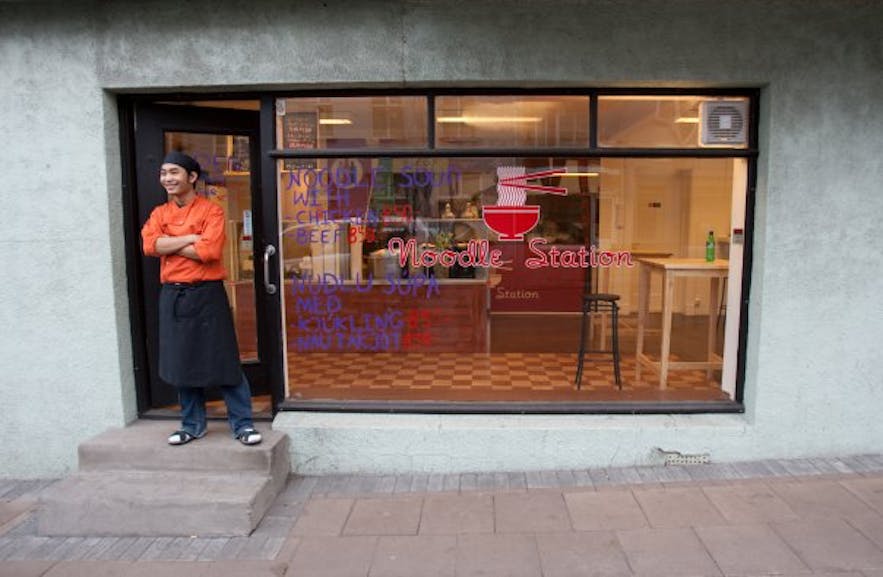 Noodle Station is an incredibly popular stop off for guests and locals alike, serving large and cheap portions of one of Asia’s signature dishes; Noodle Soup.

More than anything, Noodle Station is an authentic, family-run restaurant owned by Thai national, Charin Thaiprasert. According to urban legends, his noodle soup recipe has been in the family for generations.

The soup at Noodle Station quickly became something of a national treasure upon the restaurant’s opening in 2009 and is available with either beef, chicken or vegetable. There are also, of course, a handful of secret ingredients.

One minor issue with Noodle Station is the establishment’s size. Given its popularity, finding a seat to eat your soup can be easier said than done. 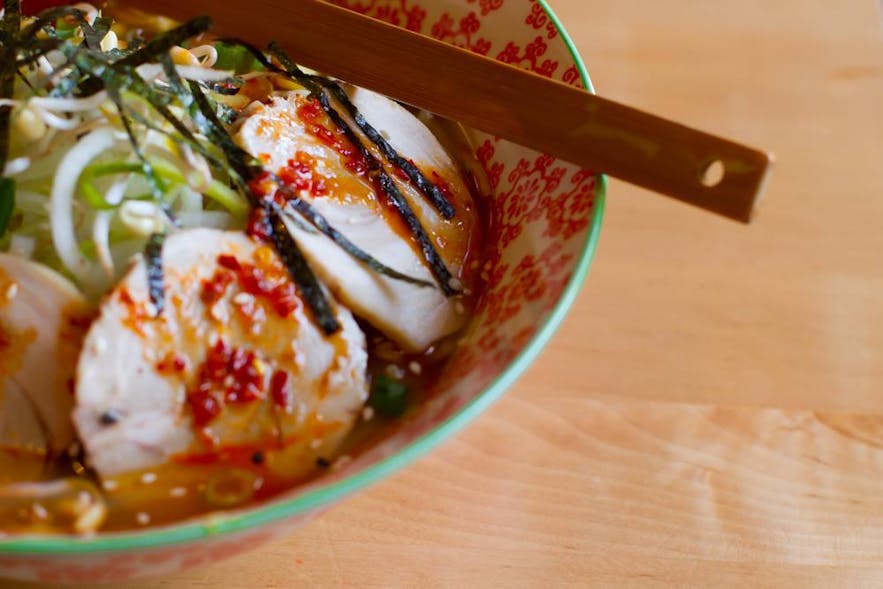 Ramen Momo is dedicated to providing Reykjavík with such culinary treasures as ramen, dumplings and many other delicious delights.

In regards to taste, texture and presentation, Ramen Momo is authentic to its roots, having been founded by Kunsang Tsering and his wife Erna Pétursdóttir, in 2014.

The venture paid off, making waves immediately across the city, and even finding some diehard fans abroad (the restaurant was given a glowing review by The Washington Post).

Conscious of both the environment and healthy eating habits, the restaurant boasts the only organic noodles in the city. They always make their own noodles in-house from locally sourced ingredients.

Ramen Momo will even offer a price discount for those who bring their own containers to the establishment, thus saving plastic and a pretty penny. 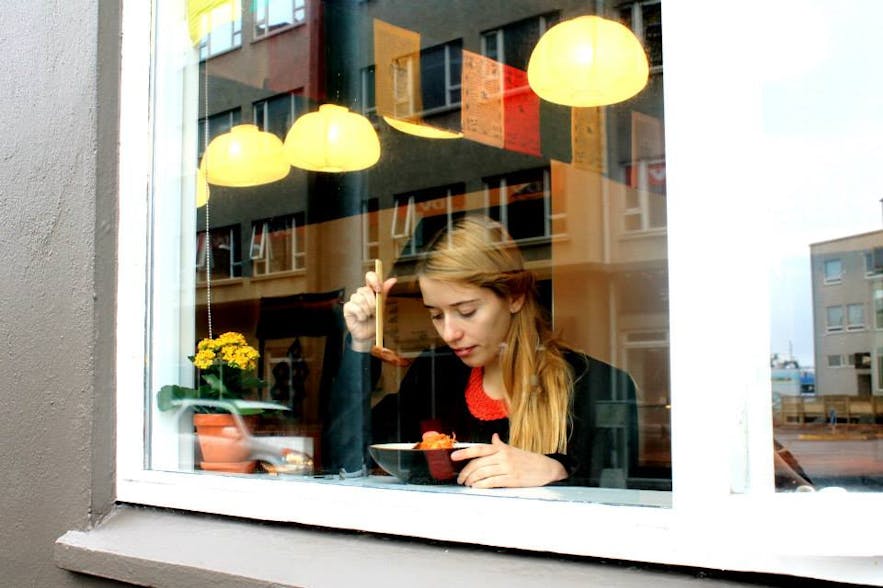 One point should be made clear with Ramen Momo; this is a tiny noodle station, with indoor seating for approximately eight people only.

There are sometimes a further two seats outside, but all in, Ramen Momo is something of a standing-room, grab-and-go type deal.

That does nothing to deter anyone from the reasonable prices. One could order a Tonkotsu soup with Ramen noodles and pork for 1890 ISK. Alternatively, one could buy a Kimchi Salad for less than a 1000 ISK, or eight pieces of Japanese pan-fried Gyoza for 1690 ISK.

Though Reykjavik, and Iceland in general, holds a reputation for expensive prices, if you do your research you will be able to find some fantastic value food options out there. This list above provides our hand-picked suggestions of some of the best places to eat in Reykjavik. We’d love to answer your questions or hear about the experiences you’ve had with some of the cheap eats in Reykjavik options in the comments below.

Which mountains are the most beautiful mountains in Iceland, where are they located and what kind of mountains can you find in Iceland? Find our range of Mountain Tours here  Why not join this Mou...