The Gardar BA 64 is Iceland’s oldest steel ship, a former whaling and fishing vessel, now lying on the Patreksfjordur fjord shoreline in the Westfjords.

Travelers wishing to see the shipwreck can take a three-week self-drive tour around the country and include a visit to this attraction. Or, discover the natural wonders of the Westfjords on a five-hour hiking trip and make sure you check out the shipwreck while you’re in the area.

The Gardar BA 64 ship was launched as a whaling ship in 1912, the same year the Titanic sank. It was retired from service in 1981 and today offers an opportunity for tourists to see an up-close shipwreck on a picturesque stretch of coastline.

Photo from Wikimedia, Creative Commons, by Martin Cigler No edits made.

What is the Gardar BA 64 Shipwreck?

The Gardar BA 64 Shipwreck is Iceland's oldest steel ship. Now resting on the Patreksfjordur shoreline, it serves as a cultural and historical attraction for visitors. Patreksfjordur is well known for its fishing industry, the primary source of the region’s income and livelihood both historically and today.

The Gardar BA 64 was completed in a Norwegian shipyard in 1912 and first served as a whaling ship in Norway. It was then known as the Globe IV, trading hands through several countries over the years. In 1950 the ship reached Iceland, and in 1963 it was renamed Gardar BA 64.

The ship's engineering design reflected the environments in which it operated. A reinforced hull meant the Gardar BA 64 could forge ahead through icy seas, and its strong engine kept it sailing through still waters.

When whaling restrictions increased, the Gardar BA 64 became a herring fishing boat. After a long and respected career, the ship retired in 1981 due to mounting safety concerns.

Now it sits rusting on a remote slice of the Icelandic coastline, ready to offer guests a taste of the country’s history and some excellent photo opportunities.

For safety reasons, it’s crucial to adhere to warnings not to enter the ship. Since its abandonment, there structural integrity of the ship has been compromised.

What's unique about the Gardar BA 64 Shipwreck is that it technically isn't a shipwreck. It just became too unsafe to use. The Gardar BA 64 sailed under different names for approximately 69 years. It withstood the trials of time and now serves as a Westfjords attraction.

There is nothing more beautiful than combining history with nature. Gardar BA 64 is an everlasting example of a historical artifact living harmoniously with its natural surroundings, offering visitors an opportunity to reflect on the past in a beautiful natural setting.

Due to its rare long-lasting duration and purpose, the Gardar BA 64 is a powerful physical reminder of Iceland’s history and the hard work fishermen performed to earn their livelihood long ago. Visitors can get up close and take photos or view the ship from afar.

How to get to the Gardar BA 64 Shipwreck

The shipwreck is on the Patreksfjordur fjord coastline, 10.6 miles (17.1 kilometers) from Patreksfjordur village. Drive south along route 62, then turn right on the road 612 at the fjord’s base. The Gardar BA 64 is a short drive along road 612. 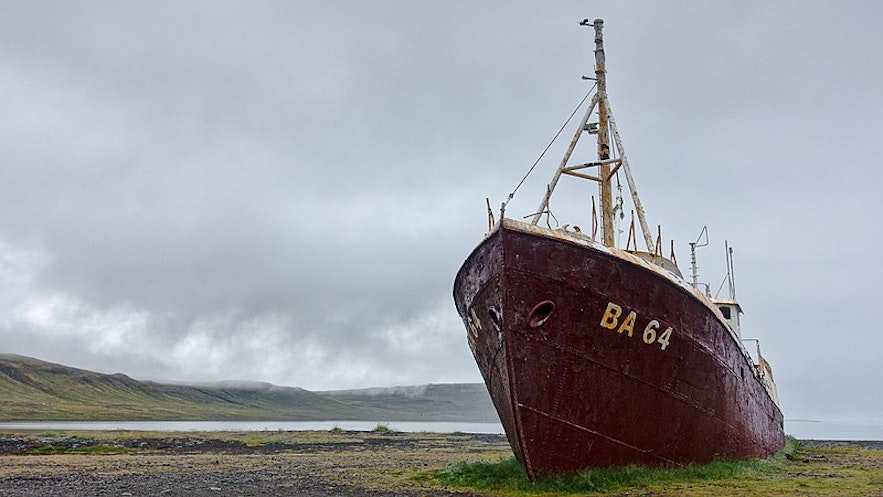 Photo from Wikimedia, Creative Commons, by Rob Oo No edits made.

Visitors will find many natural wonders and hidden gems in the Westfjords region. From the Gardar BA 64, enjoy a scenic drive across the old mountain route to Talknafjordur village, 19.6 miles (31.6 kilometers) away. Here you can enjoy modern amenities, including a restaurant and thermal swimming pool facilities.

The Latrabjarg cliffs are known for their incredible access to birds, especially the elusive puffin. They're the tallest sea cliffs in Iceland and are home to abundant birdlife, 26.6 miles (42.9 kilometers) from the Gardar BA 64.

Don’t miss a visit to Raudisandur beach, just 9.4 miles (15.2 kilometers) from the shipwreck. It’s named appropriately because the crushed red scallion shells give the sand a red appearance. This beach is a beautiful place for photo opportunities and wildlife spotting.

Dynjandi waterfall is 50 miles (81 kilometers) from the Gardar BA 64. This majestic waterfall is unique because visitors meet several other waterfalls along the 20-minute walk to see it. Boasting immense power and beauty, it’s a must-see Westfjords attraction.