Geldingadalur is an area on the Reykjanes Peninsula, notable for being home to the Fagradalsfjall volcano, which erupted in 2021.

The Reykjanes Peninsula in southwest Iceland is a very volcanic area, renowned for its conic mountains, craters, hot springs, and lava fields. The eruption at Geldingadalur, however, was the first in the region for 800 years.

At 21.30 on March 19th, 2021, a 700-meter fissure opened within Fagradalsfjall. The lava flows covered around a square kilometer. However, aside from its release of poisonous gases, it was clear that the volcano would pose no significant threat to life and infrastructure, as it was occurring in a sheltered valley away from any settlements and had a gentle, effusive flow. 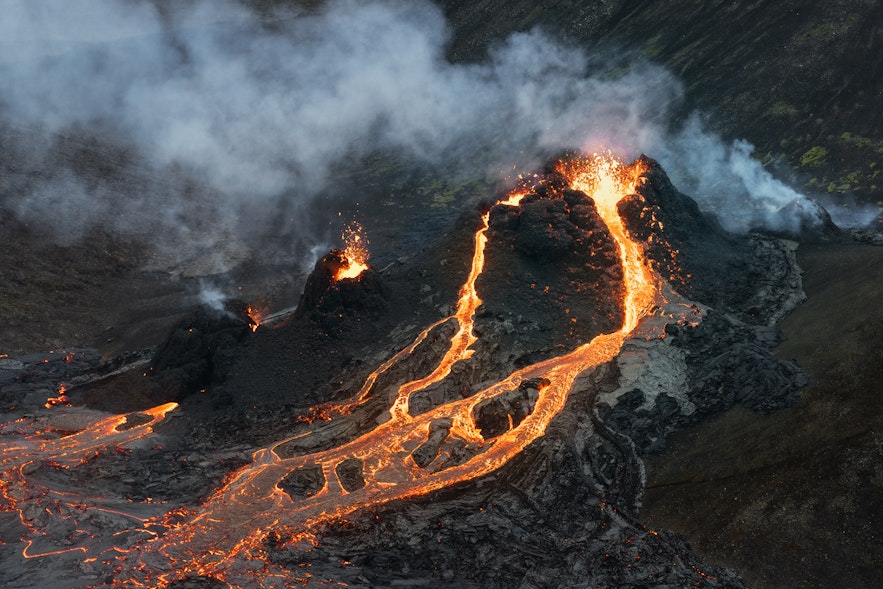 Though it was unknown where the event would occur, it had been heavily suspected by those living in Reykjavik and on the Reykjanes Peninsula that a local eruption would happen for weeks. Over 40,000 earthquakes and tremors shook the region, with some as high as 5.7 on the Richter Scale.

Due to its relatively small size, gently moving lava, and the lack of glaciers on top of it, Geldingadalur’s eruption posed no threat to air travel. It stopped erupting in September 2021.

In August of 2022, there was a nearby eruption at Meradalir valley, which lasted for 3 weeks.

The Reykjanes Peninsula, adjacent to the capital region and home to the Blue Lagoon and Keflavik International Airport, is accessible throughout the year. It requires hiking over some rugged terrain to reach.

However, certain hiking tour operators have access to the site and offer tours, like this 5-Hour Trip to Fagradalsfjall. Many are operating from the nearest town to the eruption, Grindavik.