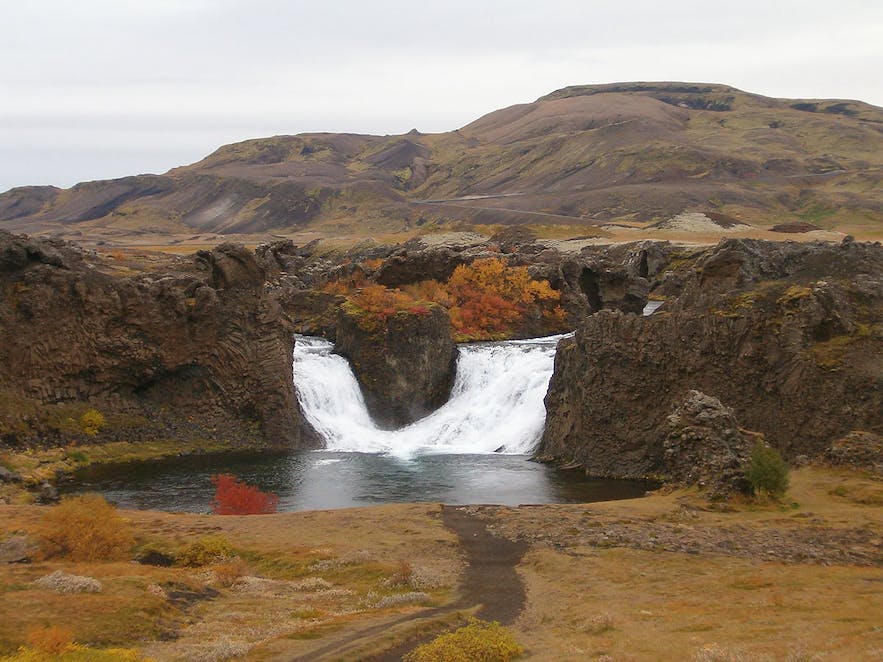 Hjálparfoss is a waterfall (or, officially, a pair of waterfalls that conjoin) in South Iceland.

Explore a wide range of tours on one of these South Coast tours.

Hjálparfoss is an incredibly serene feature, marking where the rivers Fossá and Þjórsá meet. Both of these are renowned as some of Iceland’s best and easily accessible fishing rivers, while Þjórsá also takes the title of being the country’s longest.

The two rivers fall from a lava field at about a 45 degree angle from each other, from about the same height, and their cascades merge as they tumble into a serene pool.

The lava field that this feature falls from was created in one of the many eruptions of the nearby Hekla volcano. Hekla is one of Iceland’s most active, unpredictable and explosive volcanoes, so violent that in the Middle Ages it earned the nickname ‘the Gateway to Hell’.

The water that flows from Hjálparfoss feeds the country’s second largest hydroelectric dam, which sits just a little downstream.

Hjálparfoss is easy to get to, being just 30 kilometres (19 miles) from the village of Flúðir, famous for being home to the ethereal Secret Lagoon.

To reach it from Reykjavík, travel along the Ring Road heading south, before turning left onto Route 30. Turn right onto Route 32, which is a gravel road, and Hjálparfoss will be on your right as you get towards the end of the road.

Hjálparfoss is close to other popular locations, such as the aforementioned waterfalls and lagoon, and the famous sites of the Golden Circle. It is more than possible to comfortably visit it alongside Þingvellir National Park, the Geysir Geothermal Area and Gullfoss waterfall within a day.