Þorvaldseyri is a historic farm located beneath Iceland’s most famous volcano, Eyjafjallajökull.

Photo by Wikimedia, Creative Commons, by Matt Riggott. No edits made.

The effect on the economy was notable and disturbing (particularly considering Iceland has some much bigger eruptions likely in the coming years).

In rural South Iceland, however, the eruption is more famous - or infamous - for its effect on agriculture. Ash poisoned crops, which in turn poisoned livestock, and farms throughout the region were affected terribly. Þorvaldseyri was one such farm but helped save itself by the ingenuity of its owners, who chose to open an exhibition on the eruption here.

Admission for adults is just 750 ISK, and those under 12 can enter for free.

The exhibition focuses on the challenges that farmers face when volcanoes erupt. This is not just in regards to the aforementioned poisonous ash, but also the flow of lava and the little-discussed but incredibly deadly glacial floods.

These glacial floods are called Jokulhlaups in English, taken from the Icelandic Jökulhlaup. This is one of only two words used in English taken from Icelandic, the other being geyser, named after the Great Geysir.

Jokulhlaups are the reason the South Coast is has vast deserts of black sands from the mountains to the sea, and why very few settlements are found where they can potentially occur.

Þorvaldseyri is easy to reach for those travelling Iceland’s South Coast. This is a very popular region to traverse with famous sites such as the waterfalls Seljalandsfoss and Skógafoss, the beach of Reynisfjara, and the Jökulsárlón glacier lagoon. Some South Coast sightseeing tours make a stop at the farm.

Þorvaldseyri was originally founded in 1886, and, after a period of going in and out of ruin, became immensely successful. It reared sheep and cows, produced grain, and even utilised its own hydroelectric power for electricity and geothermal water for heating. 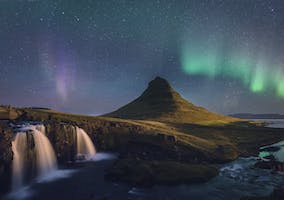