Rutshellir cave, also known as the Cave of Rutur, is one of the largest man-made caves in Iceland, famous for its mysterious origin and folklore.

There are currently no tours that include Rutshellir cave as a specific destination. But travelers eager to visit the cave can add it as a quick stop on ring road self-drive tours and South Coast private tours. For example, this 4-Day South Coast Self-Drive Tour passes near the area.

This attraction is easy to get to, especially for tourists going to or coming from Skogafoss waterfall. Rutshellir cave is an ideal place if you’ve ever wanted to go caving in Iceland while experiencing Icelandic history.

A few meters from the ring road, travelers can easily spot Rutur’s cave or Rútshellir in Icelandic. You’ll know you’re in the area when you see a gigantic boulder-like rock attached to a moss-covered mountain.

While on the site, you may also spot the towering presence of the Eyjafjallajokull volcano from a distance.

From the parking lot, visitors to the area may follow the trail of slabs leading to the cave. A thick layer of green grass surrounds the track and the cave’s mountain, especially during summer. Tourists will enjoy this scenic landscape for its peaceful ambiance.

An enormous pillar of rugged rock serves as the exterior of the cave. This boulder is covered by the same mosses and grasses swarming the mountain. For some tourists, the cave’s outer appearance resembles a turf house, the Icelandic native housing style.

Meanwhile, the only entrance to the cave doesn’t fall short of the boulder’s beauty. In particular, a stone barn or sheepcote serves as the gateway to the cave. According to observations, the sheepcote has been rebuilt a few times since 1917.

When you enter the cave and close the gate behind you, you’ll be surprised at how spacious the inside is. The tunnel runs approximately 65 feet (20 meters) and gets as wide as 16 feet (5 meters). Likewise, the ceiling is nearly eight feet, so don’t fear if you’re tall or even claustrophobic. 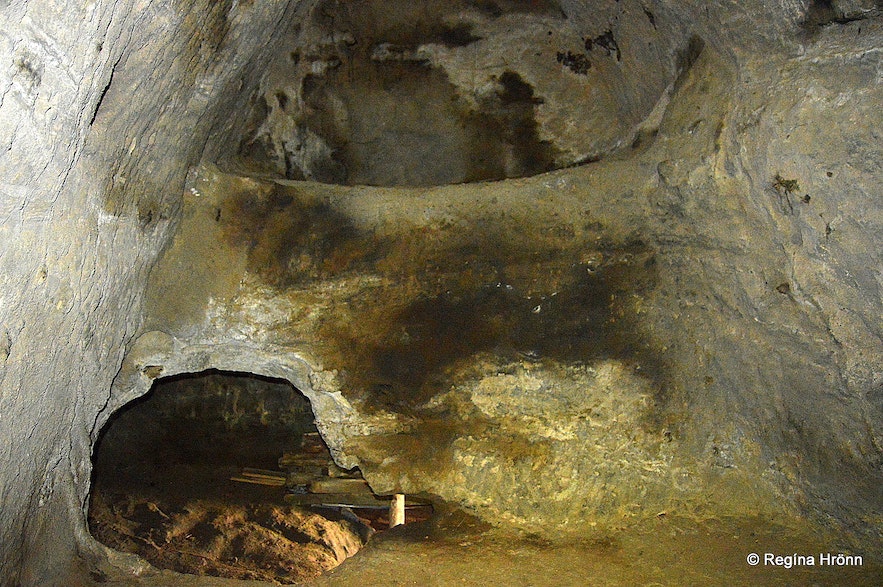 Rutshellir features two caves inside, the central tunnel and the smaller cave. Observers say the main cave was used as an outhouse for hay and stockfish. Evidence also indicates that people might have lived inside for a time.

The main tunnel leads to a large area where you can see a carved bed on the rock. The bed has a light cross carving visible above it, and below is the hole in the smaller cave.

This smaller cave is locally known as Stukan. There is no conclusive evidence determining what the smaller cave might have been used as before. But according to locals, it could have been a heathen temple or a blacksmith’s workshop.

Whatever it is, the mystery only adds to your great experience.

Locals know the two chambers of Rutshellir cave as a site with mysterious historical origins. Thanks to Icelandic folklore, more and more people are intrigued to visit the attraction.

History of the Icelandic Cave

One certainty about the cave is that it is man-made. It’s likely one of the oldest artificial caves in Iceland, and it’s almost an example of a turf house. Turf homes were Icelandic houses with extra stone and natural features for insulation.

The earliest account of the cave goes back to 1714, when the Register of Estates by scholars Arni Magnusson and Pall Vidalin mentioned it. Some decades later, Icelandic historians described Rutshellir again in travel and archeological books.

Today, the Rutshellir cave is a great tourist attraction in South Iceland.

Folklore of the Cave of Rutur

A more exciting part of the cave’s history is the legend surrounding it.

Rutshellir cave got its name from its alleged first inhabitant, a man named Rutur. Some tales say Rutur was an evil local ruler, a troll, or a thief. In these versions, local villagers built a hole under his bed and killed him with spears.

In another version of Icelandic folklore, Rutur, a cruel chieftain, enslaved people, so they plotted to kill him. But he eventually discovered their plans, so he killed them first. According to the story, Rutur took them down one by one. The last enslaved person he killed was Gudni, who died on a stone called Gudnasteinn on Eyjafjallajokull glacier.

Whichever version seems more plausible, there is no denying that these local stories are now part of the cave’s colorful history.

Nearby Attractions from Rutshellir Cave

After you enjoy caving in Rutshellir Cave, there are plenty of other nearby attractions.

Follow the history of Rutur and track down the Eyjafjallajokull glacier, where Gudni made his last stand. You can combine this with a thrilling look at the mountain ridges and waterfalls of Thorsmork with this Private 10-Hour Tour from Reykjavik.

Another excellent option is to cool off and unwind in the Seljavallalaug outdoor swimming pool after physical activities. It’s a great escape that’s nestled in the mountains of Iceland.

But if you want the more popular choices, the stunning waterfalls of Seljalandsfoss and Skogafoss are just a few kilometers from the Icelandic artificial cave. 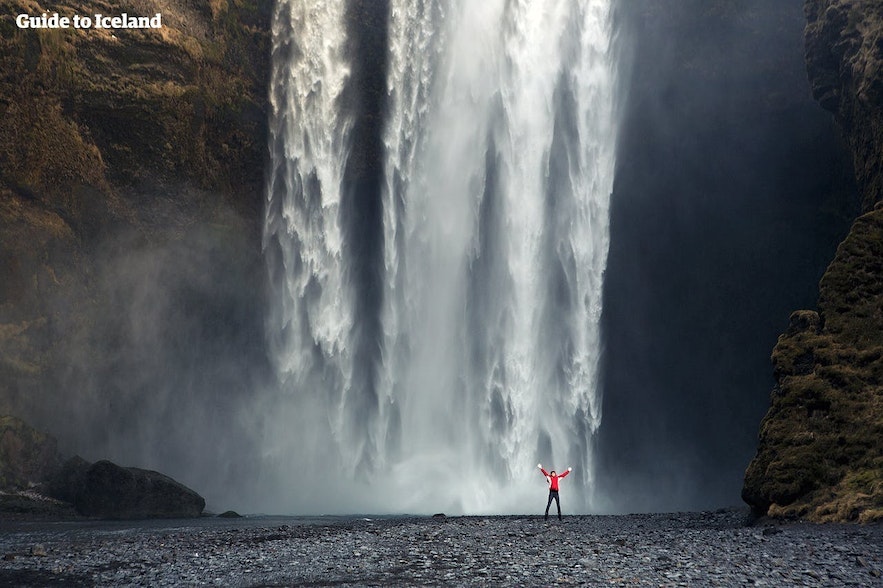 If all of these sound fun, enjoy local accommodations in nearby towns and villages such as Vik and Hvolsvollur. Staying in these accommodations will allow you to enjoy all the raw beauty of Iceland and quickly visit these beautiful landmarks.

With its convenient location along the ring road, traveling to Rutshellir cave is relatively easy.

The easiest way to reach the attraction is through self-drive tours passing through the South Coast or along the ring road. As it is not as popular as its counterparts in the land of fire and ice, there are currently no direct guided tours to the cave.

Although it is 94 miles (151 kilometers) from Iceland’s capital, Reykjavik, the cave is near the most visited attractions on the South Coast. The majestic Skogafoss waterfall is just three miles (five kilometers) from it.

Moreover, the cave is easy to search for because it is near scenic towns and villages. For example, the village of Vik i Myrdal, a famous stop for Icelandic tours in the south, is just 22 miles (36 kilometers) from the cave.