What are the funniest things tourists have done in Iceland? Read about some hilarious mistakes tourists (and locals) have done on their travels in Iceland!

Early in 2016 Iceland found its most famous tourist of all times, and it wasn't any of the many celebrities that came to shoot a movie or a music video, but a regular guy from the USA that did something so funny that he acquired both Icelandic and worldwide fame in his first few hours in Iceland.

He inspired us to make a list of the funniest things that tourists (and a couple of locals) have done in Iceland. A list that includes the weather, stupid decisions, typos, poo and self discovery. If we're leaving something out, let us know!

The following fun incidents are not down to stupidity but rather confusion or bad decisions, but you should also be sure to read our list of the dumbest things to do in Iceland!

First up we want to share Noel's story. Noel is an American guy who decided to go on an adventure trip to Iceland. He got a little more than he bargained for, as he accidentally drove to a small fishing village in North Iceland instead of to the capital city and became famous overnight during his first day in Iceland. And not just locally! The story was picked up in the New York Times, BBC, CBS News, the Independent, TV2, Aftonbladet, the Daily Mail and in a number of other international media!

How did he get lost?

Noel is from New Jersey and back home he uses his GPS a lot to get around. Maybe he depends on it a little too much, or at least that was the case when he came to Iceland.

He landed in Keflavík international airport after a 5 hour flight from the USA in dark and icy February. Since he was a bit tired after the flight then he wanted to get to his hotel in central Reykjavík as soon as possible and get some sleep. He'd booked a room at Hótel Frón, a lovely hotel that's situated on the main shopping street in downtown Reykjavík, Laugavegur number 22A. However, there was a little spelling mistake on his booking form, meaning that the address was marked as LaugaRvegur, and that one extra R had some serious consequences for poor Noel.

Laugavegur means 'Pool Road', whereas Laugarvegur means 'Pool's Road'. So it's actually a perfectly acceptable spelling of a road that exists, except it's not the road in Reykjavík he wanted to get to, but happens to be a road in a town called Siglufjörður in North Iceland.

If Noel would've done a bit of research before arriving in Iceland, he would've found out that the drive from the airport to centre of Reykjavík takes about 50 minutes. Instead he drove through Reykjavík, blindly following his GPS directions that led him almost 380 km (235 miles) further, on a 6 hour trip. 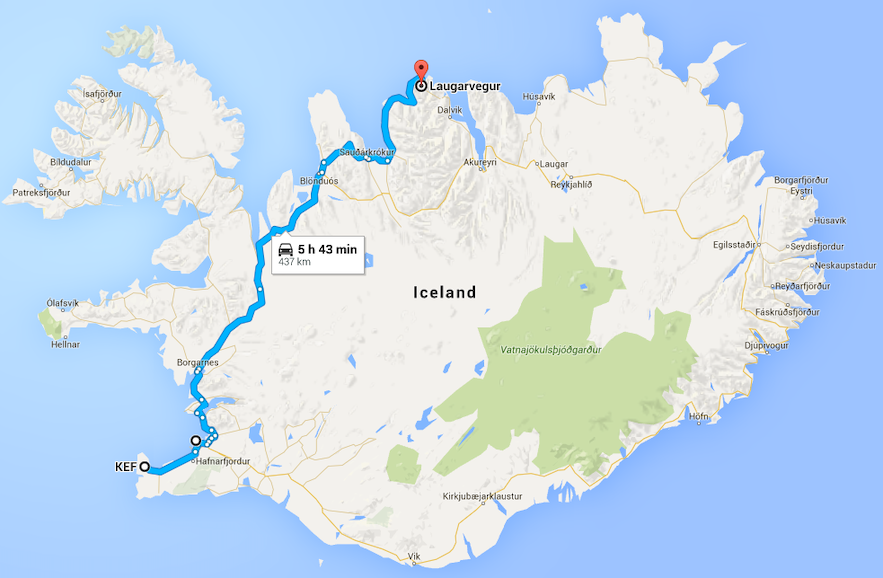 When he arrived at Laugarvegur in Siglufjörður he knocked on the door at number 18 (there is no house number 22A) and asked if that was his hotel. He was greeted by a bewildered woman who explained his mistake to him and arranged for him to stay at the local hotel. When he called his actual hotel, the manager at Hótel Frón didn't believe his story at first, but agreed to postpone his reservation.

Luckily for Noel, Siglufjörður is one of Iceland's most picturesque villages. It's also quite isolated and the roads that lead there are often closed (this is the filming location for the TV series Trapped, shown above, to give you an idea of what it can be like in winter) - so fortunately he didn't get stuck on the way! He hadn't planned on visiting North Iceland on his short stopover, since the north can be hard to access during winter but ended up having a wonderful time, meeting some wonderful people and he was really grateful for his mistake. 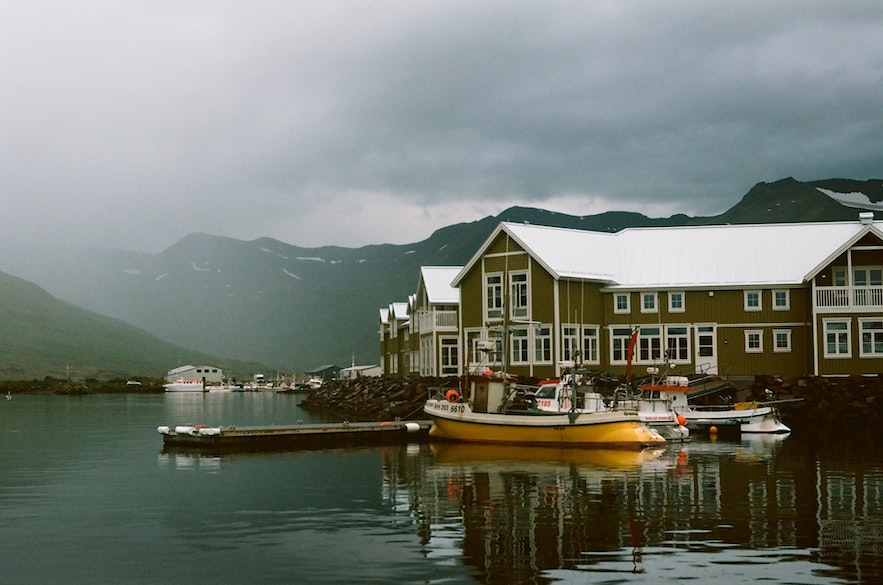 The hotel where he stayed, Hótel Sigló, is also one of Iceland's best hotels - and they even offered him a second night for free.

When he was interviewed about the whole thing he mentioned that he did think the drive was pretty long and he was confused as to why all the road signs were pointing the wrong direction to Reykjavík. He made a couple of stops to buy himself some water and checked his GPS again, but the GPS always showed the same destination.

His face became so famous overnight that a couple of days later, when he accidentally ended up in a staff meeting at the Blue Lagoon (again, blaming his GPS for leading him the wrong way) the staff at the Blue Lagoon recognised him, took a few selfies with him and then invited him to a free visit at the lagoon. So getting lost doesn't have to be all that bad in Iceland!

This should teach people not to make any typos, but we can't all be perfect. At Guide to Iceland we strive to correct all spelling mistakes we come across, although we found this hilarious spelling mistake from our part in an answer on the comment section of Best Attractions by the Ring Road of Iceland the other day, and were so amused that we decided to let it stay as it is.

Needless to say, midgets don't congregate near Lake Mývatn, or anywhere else in Iceland for that matter. You can however find dwarves in this Dwarf Stone in East Iceland.

2. Queuing up for Pictures of Burning Poo 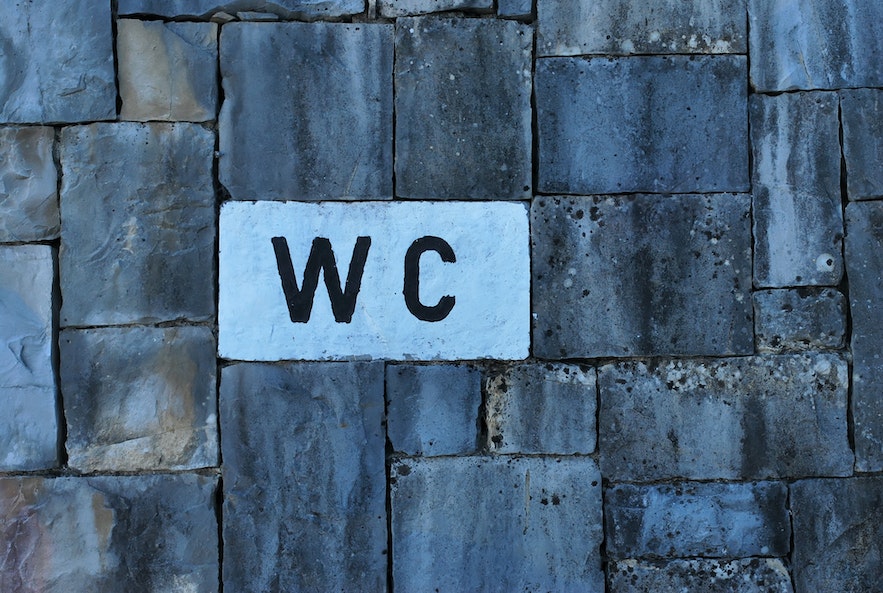 In 2015 a very considerate traveller had read somewhere that instead of burying your toilet paper under a rock, you should burn it (along with your 'business'). So that's what he did, after tending to nature's call in a field of moss (something that we don't recommend and is actually one of the things Icelanders hate about tourism!)

Unfortunately, the weather had been exceptionally nice and dry leading up to this particular day, so the field of moss was very dry and caught fire! That in itself is not funny at all and we urge people to respect our nature and especially the delicate moss. 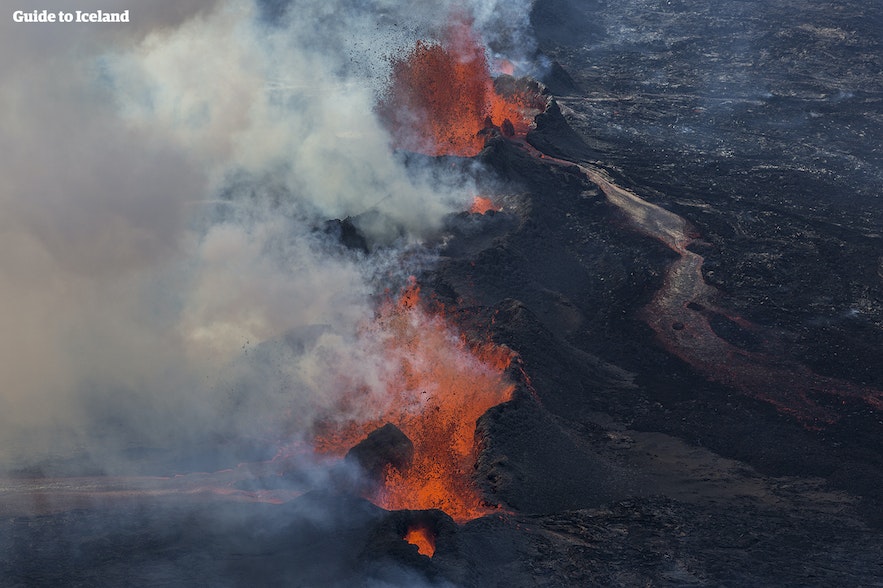 On the other hand, we find it rather entertaining that a couple of cars that were driving by stopped, because the tourists inside thought that a volcanic eruption was about to start! They started snapping pictures of the fuming moss field, basically queuing up to take pictures of burning moss and poo, until informed by the police about what was actually going on. 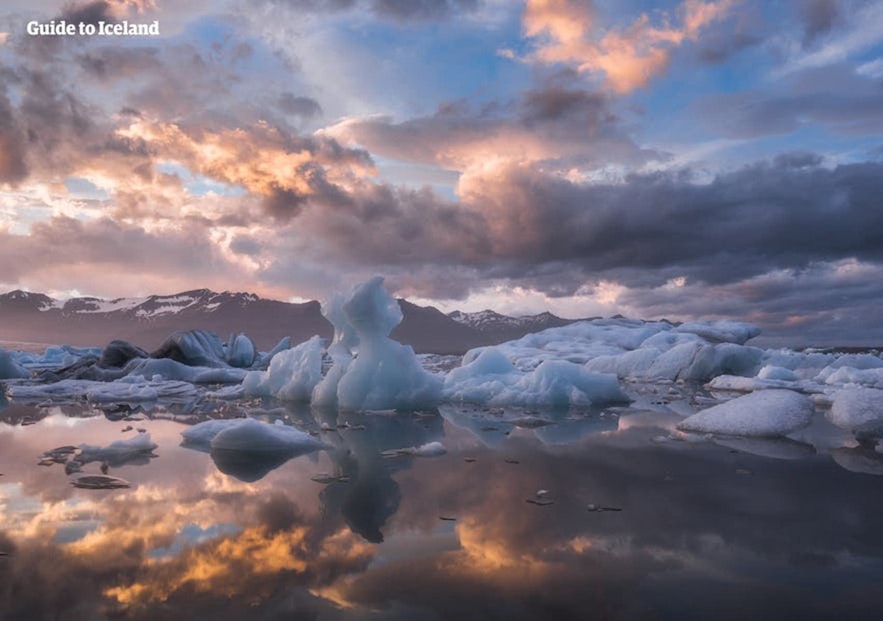 People do many stupid things in Iceland. One of those stupid things is to walk or climb on icebergs in glacier lagoons. Although it may look cool on a photo, it can actually be deadly and there are a number of things that can kill you in Iceland. A number of people need to be saved each year for stupidly walking onto ice in the glacier lagoons and getting trapped on an iceberg.

We definitely do not encourage this reckless behaviour, but we can think of one hilarious incident involving being trapped on an iceberg.

In 2013 a party of 5, two Americans, two Germans and an Irish person (two of whom had lived in Iceland for a few years!) thought it would be funny to set up a pic-nic dinner with fold-up chairs and table, on a little iceberg in the glacier lagoon Fjallsárlón, where there was no-one around.

They put up a camera on land to picture the whole thing. They then had their meal and when they finished their meal they realised that the camera was somewhat further away then when they had started their meal. One person had to swim to the land in the freezing cold water, intending to get a rope to pull the iceberg back to land. He (or she) however (unsurprisingly) got too cold to swim back and ended up calling for help. 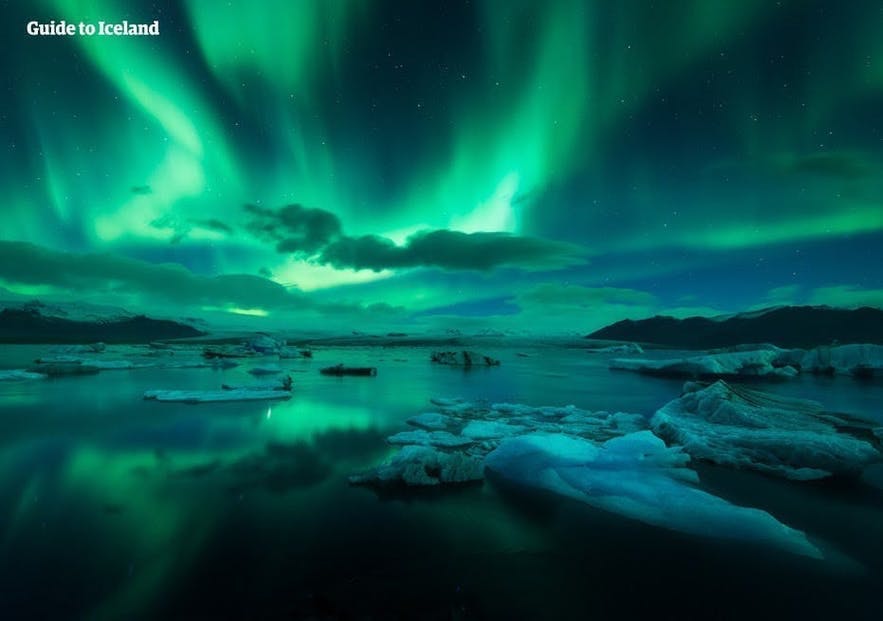 When Iceland's search and rescue team showed up an hour later the ice had already drifted 10-15 meters away from the land, with 4 people sheepishly sitting on it on stools around a fold-up table. They were quite merry when they were eventually saved and joked about the whole thing, not realising how dangerous it was, as the ice could've capsized at any moment. As a result, they were so embarrassed that they didn't want to give out their names or give any interviews (we can understand why!)

A pro tip when in Iceland: Try not to unnecessarily end up in a situation where the search and rescue teams need to come and save you, it's a waste of their time and effort!

4. The Woman who went Searching for Herself... 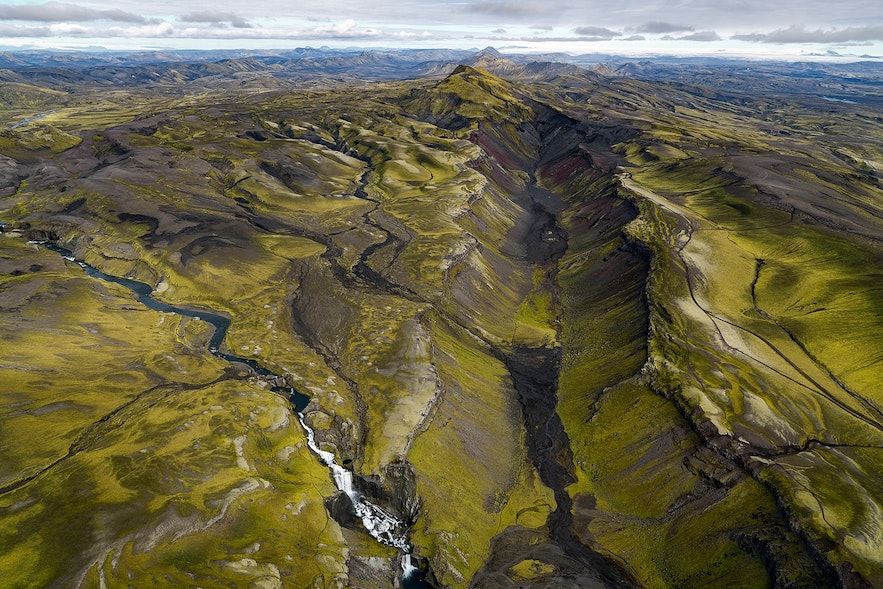 Photo from Wikimedia, Creative Commons, by the Archive Team. No edits made.

One woman reinvented the meaning of 'self-discovery' in 2012 as she joined a group of people in a search for herself.

She was a passenger on a tourist bus in a popular hiking area called Eldgjá in South Iceland. An hour after the bus should've left the tour guide reported one person missing, an Asian lady in dark clothing that was about 5ft 2in tall. No-one on the bus had seen her for a while and the Icelandic search and rescue teams and police were alerted. A full blown search ensued, with many of the tourists on the bus joining the search party, including the woman that was supposedly missing!

It wasn't until 3am in the morning that she realised that she was searching for herself and then she immediately informed the guide and the search was called off.

The mistake happened because the bus driver had not counted correctly how many people were on the bus. The woman in question had gone to the restroom before returning to the bus, where she changed her clothes and freshened up, so people on the bus did not recognise her and she was presumed missing. She had absolutely no idea that she was the one that had been reported missing. Ironically, nobody knows any more details about this woman (such as where she was from exactly) since after the incident she got lost in the crowd again...

Finally, the Icelandic weather and seasons can be difficult and harsh - but the weather also does provide some entertainment from time to time. Perhaps not the most advanced humour, but people falling on their bum is a bit of a classic. Above you can see a footage of some people trying to cross a street in Reykjavík during a snowstorm in 2014.

You can also read up on how you should not do the same things as Justin Bieber in Iceland, the second-most famous tourist to visit Iceland recently - and be sure to let us know which funny stories you've heard about travellers in your country! :)