For over twenty years, GusGus has paved the wave for the Icelandic electronic scene, having released over nine studio albums, remixed the country's most iconic artists and played numerous sold out international tours. Read on to find out a little more about GusGus, as well as for the chance to listen to my Top 5 tracks from the band.

Photo above from Wikimedia, Creative Commons, by DarwIn. No edits made.

GusGus started in 1995 as an acting and filmmaking collective, founded by former Eurovision contestant and solo artist, Daníel Ágúst Haraldsson. Originally, the group had twelve members, though the lineup would change time and time over as individuals broke off to pursue other equally successful projects.

For example, filmmakers Arni and Kinski left GusGus in its early years to open their own production company, Celebrator, whilst former member Emilíana Torrini recorded a song for Peter Jackson's Lord of the Rings trilogy following her departure from the group.

National icons Stephan Stephensen (aka; President Bongo/Alfred More/President Penis) and Birgir Þórarinsson (aka; Biggi Veira/Biggo) have both been a part of GusGus from the beginning, whilst lead vocalist Daniel took a hiatus in the early 2000s.

GusGus concretely established themselves as part of the Icelandic music scene between 1995 and the millennium, releasing four studio albums that were critically praised at home and abroad. 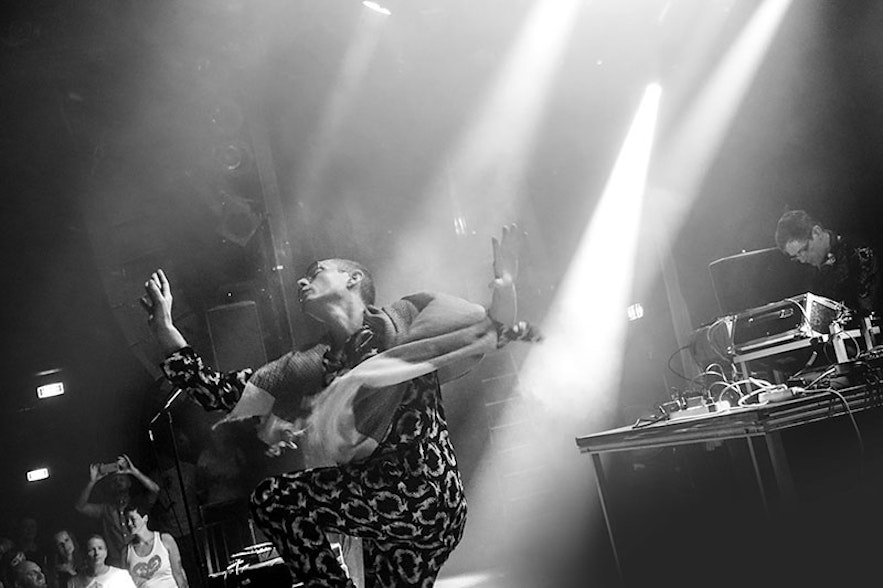 Understandably, GusGus was forever going to bring upon themselves a comparison to fellow Icelanders, The Sugarcubes. However, the two bands are totally different in sound and style. Whereas The Sugarcubes were all about letting loose, GusGus dedicated themselves to the idea of restraint.

The band had particular success in the United Kingdom, a country then driven frantic with enthusiasm for late night raves and acid house beats. Due to this kinship, GusGus seized the opportunity to perform abroad; ever since they have enjoyed the luxury of forever reshaping their sound and bringing it to an eagerly awaiting crowd.

Though widely considered an electronic band, GusGus could easily slip into a number of categories, including techno, house and trip-hop. Some have even gone as far as to describe the music as electronic soul.

One major reason for this overwhelming lack of genre is the ever-changing membership; with a fluctuating lineup, GusGus have been able to draw upon the best individual tastes and skill of each passing musician, nurturing it and adopting it wholly into their sound.

The best place to see GusGus play live is, of course, their hometown of Reykjavik. The band is dead-centre of the Icelandic music scene and are involved in the vast majorities of large-scale festivals played in the country, including Secret Solstice, Iceland Airwaves and Sonar Festival.

And so, below I have listed five taster tracks from GusGus as an introduction to the eclectic sounds of Iceland's premiere electronic outfit. With a career spanning a little over two decades, however, it is impossible to collate a choice of five that will appease everyone—regardless, these tracks are integral to any Icelandic playlist, as perfect for a pre-night out drinking session as they are for a solitary drive through Iceland's cool Scandinavian landscape.

One of the group's major hit singles is 'Over', featuring the haunting voice of Urður Hákonardóttir, on the 2014 album, 'Arabian Horse'. Her sweet, sultry vocalisations fit perfectly with this mysterious and beautiful music video, painting Iceland with a certain ethereal magic that we can all relate to.

The music video was directed by working couple and debut filmmakers, Ellen Loftsdóttir and Thorbjorn Ingason, and showcases the fabric designs of the fashionista, Gudmundur Jörundsson.

'Over' is an excellent example of the latest type of sound coming from GusGus. The music is theatrical and camp and utilises the group's nostalgic connection to the early nineties music scene. Despite the natural aesthetics of the video, music such as this firmly plants GusGus in the realm of 'urban music.'

The album received positive views after its release, though many critics felt it was too traditional for an outfit such as GusGus. All Music described the record as " combined with the cool restraint that defines all the band's work, notably present in Daniel Agust and Siggi's almost unearthly calm (but never totally dispassionate) singing, the result is an effective blend of styles that works from start to end."

'Add This Song' appeared on the band's seventh studio album, '24/7', appearing as the first single. The song itself is prime GusGus, demonstrating that proficiency when it comes to minimalist techno and house music. Daníel's voice is filled with a composed anguish throughout, perfectly complimenting the backing mechanic instrumental.

The album was released by German electronic label Kompakt and received rave reviews from the critics, with Drowned in Sound writing "It begins like Boards of Canada, except with sounds more easily recognisable as synths that mere mortals may have access too, then lurches back into focus somewhat and pulses forward in a mid-Nineties rave-influenced direction."

'24/7' is, no bars hold, a dance record, though one of the more moody examples of the genre that you're ever likely to find. Lyrically, the album is reflective and pointed towards the difficult economic times Iceland faced following the 2008 financial collapse. However, GusGus are not offering sympathy or even a solution; this is a dance album very much caught up in the apathy of the modern age... it does it brilliantly.

If anything is going to get you dancing at two in the morning, it's going to be something eerily reminiscent of 'Crossfade'; this electronic anthem begins slowly, with a thumping rhythm that refuses to let up, finally culminating in a gorgeous man-on-man duet that lingers between humorous and eerie. Watch the video and you might understand what I mean.

The album title was derived by vocalist Daníel Ágúst Haraldsson; 'Mexico' was used a metaphor to describe human beings' imperative to forever 'head westward.' Once again, the album was released by Kompakt (the third with the label) and included nine tracks, including one instrumental piece.

The track was premiered at Sónar Reykjavík 2013 to immediate high praise. The album itself received somewhat of a mixed review, with critics highlighting the album's inconsistencies in regards to the overall product's quality. The album mixes festival anthems with more subdued and straight-laced techno pieces.

Personally, my favourite type of sound to come from GusGus; listening to 'David', one cannot help but conjure up images of packed dance halls, strobe lighting, Jager shots and crowds head-bobbing in unison. This lover's ode to 'David' (whoever he is) is, quite rightly, a classic in Iceland and a staple on my own playlists.

Reminiscent of an early Fat Boy Slim, 'David' has a gentle electronic build until the track thunders onto the backing groove of its up and down bassline and kinetic, synth-laced beats. Again, so distinctive of GusGus, is that teetering balance between natural and emotive vocals with the heavy thunder of a techno backing track.

'David' appeared on the album 'Attention' and featured a different line-up from the band's previous three projects. The album was released on the record label, Underwater, and received high praise upon its release in 2002.

Last, though certainly not least, is also the oldest GusGus track on this list; 'Believe', from the 'Polydistortion' album, showcases GusGus in the era of their heydey. 'Believe' is a treasure trove of falsetto vocalisations, grinding beats and grungy instrumentation. This is dark and glowering funk music, made all the more sublime with its sampling of Kool and the Gang's 'Jungle Fever.'

'Polydistortion' was the band's first formal album as an outfit and, as can be expected, was met with high praise from the critics upon its release. As with the majority of other GusGus albums, 'Polydistortion' demonstrates the band's unwavering ability to turn understatement and melancholy into electronic audial beauty.

The album was released on the record label, 4AD, famous for having previously released the works of such artists as; Pixies, St. Vincent, Bon Iver and The Breeders. Praise was high for the release; All Music wrote of the album, 'Combined with the cool restraint that defines all the band's work, notably present in Daniel Agust and Siggi's almost unearthly calm (but never totally dispassionate) singing, the result is an effective blend of styles that works from start to end.'

It has now been a few years since GusGus released an album, but fans are as eager as ever to hear what's next from this rag-tag group of Icelandic electronic maestros. Unlike other acts, GusGus' fluid lineup, dedication to the craft and all-round accessibility have cemented their role as one of the country's most reliable outfits.

All that we as fans can do it is wait patiently... if there is one thing GusGus has going for them, it is their willingness to create and distribute new material.

If you're hoping to catch GusGus performing this year, they will be playing shows throughout July and August in such far-flung corners as Spain, Romania, Germany, Ukraine and Croatia, amongst others. Tickets can be purchased from the band's official website, here.