Of Monsters And Men | A Melodic Odyssey

Photo from Wikimedia, Creative Commons, by Kennysun. No edits made.

To claim Of Monsters and Men surprised their audiences is something of an understatement. Their almost overnight success was, by all stretches of the imagination, regarded as an impossibility by observers of the industry; after all, the band had six members who were barely out of their teens and routinely utilized such off-kilter instruments as the accordion and trumpet.

Perhaps most surprising of all was how Iceland—a country of only 330,000 people—had, once again, produced a small group of artists capable of taking the planet by storm.

In only six years, the band has managed to become a fixture in pop culture; they have performed live on such programs as Saturday Night Live, The Graham Norton Show, and Late Night with Jimmy Fallon.

Their single ‘Dirty Paws’ showed up in the trailer for Ben Stiller’s comedy-drama, The Secret Life of Walter Mitty (largely shot in Iceland), and the track ‘Silhouettes’ appears on The Hunger Games: Catching Fire soundtrack. 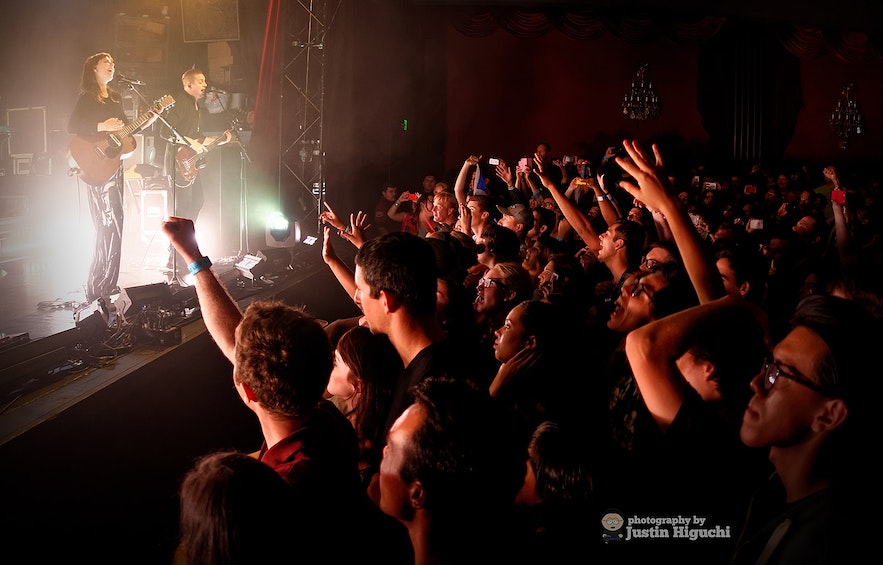 Photo from Wikimedia, Creative Commons, by Justin Higuchi. No edits made.

Unlike the ethereal soundscapes of Sigur Rós or the avant-garde electronica of Björk, OMAM firmly sits in the camp of Indie Pop and Folk, specializing in creating catchy, sing-along pop anthems that immediately hook the listener in.

This is a band that, so far, has felt no compulsion to challenge the listener, nor darken them with long and emotive instrumentals; OMAM are here to create clap-your-hand, jovial tracks, and thus bring some warmth to the often cool and dramatic tones so familiar in the Icelandic music scene.

As the only female in the group, Nanna Bryndís Hilmarsdóttir is often cited as the center point of OMAM. She is, after all, the band’s lead singer, lending the group a distinctive and sweet vocalization that both carries the melody and severs the heartstrings. With a close listen, one can hear her influences shining through; Lianne La Havas, Justin Vernon, Bon Iver… still, Nanna’s voice is all her own and an integral quality to the band’s music.

Still, to be a singer was never Nanna’s initial intention, writing in 2015, ‘I've been singing for a while, but I feel like it's always weird that I'm a singer. When I started out, I was writing songs and really focused on writing, and I really loved that. But then it's like, “Oh, yeah, somebody has to sing them,” and that was me.’

Nanna was also the first member considering a professional career in music; she was the only member to attend music school, and following graduation, the only one to begin performing solo on stage. 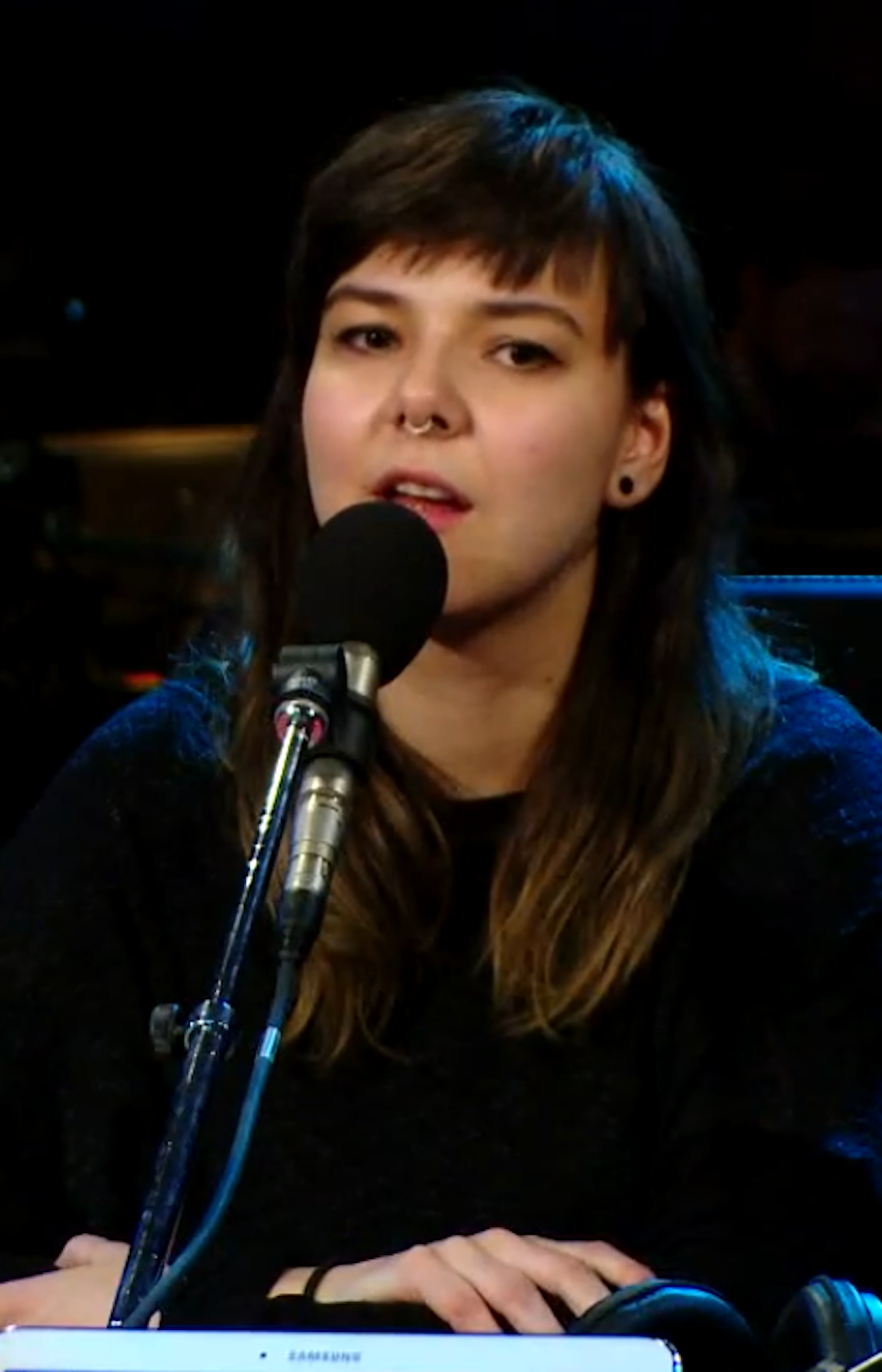 Photo from Wikimedia, Creative Commons, by Xjushuaxz. No edits made.

Brynjar Leifsson, at that time heavily inspired by Surf music, joined with Nanna after being asked to perform alongside her. Considering it would be beneficial to get some experience on stage, Brynjar quickly accepted his new role as guitarist.

The duo quickly became a trio, however, upon the arrival of co-singer and guitarist, Ragnar "Raggi" Þórhallsson, the young man then responsible for changing the band’s name from Songbirds to Of Monsters and Men. Musically gifted, Raggi had owned a guitar from as young as nine years old, but only began playing at seventeen. He would go on to be one of the most crucial and distinctive members of OMAM.

Árni Guðjónsson, the band’s keyboardist, was to join soon after, though he left in 2013 to pursue other dreams; largely, that of becoming a classical orchestra composer. On starting the band in Iceland, Árni has since joked, ‘There’s nothing fun to do so you have to do boring things like start a band.’

Now four, the band spent just one week rehearsing and writing before competing in Reykjavík’s Battle of the Bands, ‘Músíktilraunir’ (literal translation: ‘Music Experiments’), an annual music competition, in 2010. Sure enough, Of Monsters and Men were that year’s winners, propelling them suddenly into overnight sensations. Upon their victory, the band signed a record label with Universal Music Group.

Within a short space of time, OMAM would also add to their group a drummer, Arnar Rósenkranz Hilmarsson, and bassist, Kristján Páll Kristjánsson.

The band’s first EP, 'Into the Woods', was released exclusively on Itunes in anticipation of the band’s first album, featuring versions of the same, upcoming tracks, including the hit 'Little Talks.' The EP was, in fact, released in the United States only a few weeks before the album, making it an excellent introduction to the boy/girl harmonies and enduring melodies that would soon enter the cultural zeitgeist.

Tracks included from their later album 'My Head is an Animal' are: "Love Love Love," "Little Talks," "Six Weeks," and "From Finner". As with most successful EPs the short and sweet record left listeners wanting more, with many critics even concerned that the band would be unable to live up to the expectation.

As an EP, Into the Woods was instrumental in crafting the bands' aesthetic, as well as their direction musically. It was the band's first completed and recorded product and demonstrated  Nanna's and Raggi's writing partnership perfectly.

Into the Woods reached Number 108 on the US Billboard 200.

Of Monsters and Men's debut album, 'My Head is an Animal' was released in Iceland on 20th September 2011 by Record Records. An immediate success, the album was released in the next year in the United States by Republic Records. The vinyl edition of the LP was pressed in that capital of music-making, Nashville, Tennessee.

'My Head is an Animal', was seeped in fantastical, almost alien imagery; the tracks’ coincided with a number of music videos, created by the animation team WeWereMonkeys, to introduce the group’s overall aesthetic. Influenced by fantasy programming such as HBO’s Game of Thrones, as well as video games such as Limbo and Shadow of the Colossus, the group’s music videos play like abstract, dreamy narratives, complete with magical characters, flying boats, and kaleidoscopic bursts of color.

Their first single, ‘Little Talks’, was the band’s first immediate hit, having had an acoustic demo of the track recorded by Seattle Radio Station, KEXP, prior to the release. The success of this single had an incredible promotional effect, with OMAM performing an ever-growing number of concerts before audiences were even fully acquainted with who they were.

The album was received with generally favorable reviews, with Rolling Stone going as far as to call OMAM ‘the new Arcade Fire’, whilst Spin Magazine felt the album wasn't quite sure of itself; 'Even on their debut, these pirate-rock upstarts have been engineered to sound like they’re filling arenas'. A negative review from The Guardian claimed the album was 'too empty to excite, it's odder, quieter moments all but smothered by windy rock', though the same reviewer did cite Nanna and Raggi as Iceland's answer to vocalists Kim Deal and Frank Black of Pixies fame.

In late 2012, the band’s keyboardist, Árni, left the band, leaving OMAM's permanent fixture a quintet. He has since indicated that playing ‘Little Talks’ five times per day was unsatisfying and that the touring obligations had become overwhelming. A natural musician, however, Árni’s love for performance failed to diminish; he has since started a new disco/electronic outfit, Blóðberg, as well as work as a substitute music teacher. Of Monsters and Men have not enlisted a permanent replacement, though Steingrímur Karl Teague now takes Árni’s place on tour.

'Live from Vatnagarðar' was the band’s first live album, recorded at Studio Sýrland, only a few doors down from my former residence in Reykjavík. With stunning panoramas of Mt. Esjan, Studio Sýrland is one of the city’s premier recording studios, having in the past entertained such superstars as Brit-Pop’s Blur and eighties Norwegian outfit, A-ha.

The album consisted of live re-recordings of their tracks from 'My Head is an Animal', as well as a cover of the Yeah Yeah Yeahs' track ‘Skeletons.’ The reasons for recording the live album were largely twofold; first, to offer the fans alternative versions of the tracks’ so popular from their debut, and second, to help promote their upcoming second album, 'Beneath the Skin'. Atop of that, the album was the perfect choice for those who’d missed OMAM in concert and still felt the drive to hear the band jam live.

Of particular note from the live album is an acoustic version of 'Little Talks', as well as Ragnar's vicious vocalizations on 'Mountain Sound' and an alternative version of the single 'King & Lionheart.' The remaining songs are, all in all, as performed as they are in concert. The album was released digitally through Republic Records and, though it sports a nostalgic atmosphere, fans of OMAM are unlikely to find any real development in their musical direction here.

The band’s latest album saw their music take an entirely new direction; as opposed to the upbeat and jaunty tracks so prevalent in 'My Head is an Animal', 'Beneath the Skin' felt, on the whole, more personal, intimate, and human.

The album tracks remain filled with references to fairies, mountains, and forests—this is Of Monsters And Men after all—but, still, 'Beneath the Skin' is a more considered and adult album; no longer shackled by childhood innocence, the album pushes the band’s potential for melancholy.

The album’s first single, 'Crystals', reveals that better than most; "Lost in skies of powdered gold/ Caught in clouds of silver ropes/ Showered by the empty hopes/ As I tumble down/ Falling fast to the ground” Upon its release, 'Crystals' topped the Billboard Adult Alternative Songs chart, a feat that not even Björk has achieved.

The album was produced by Rich Costey—best known, perhaps,  for his work with Death Cab for Cutie, Biffy Clyro, Foo Fighters and Muse—and was recorded in Iceland and Los Angeles.

The Future of OMAM

It seems almost ridiculous to consider that it has been nearly six years since the band's first outing on the international stage. Not dissimilar to their musical peers, Sigur Rós, the band is not shy to the importance of time—now living for a short while back in Reykjavík, OMAM have earned themselves a well-earned break from the spotlight. 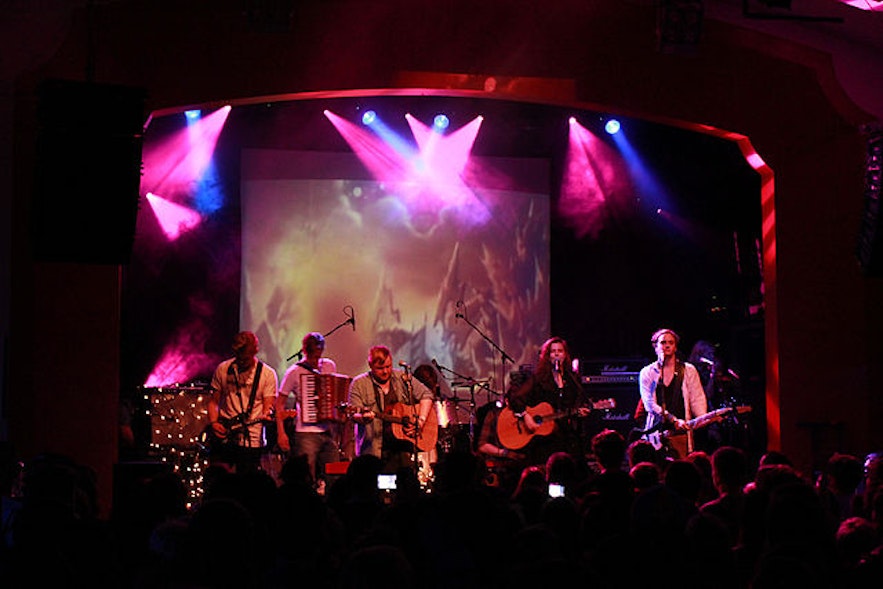 Photo from Wikimedia, Creative Commons, by Mohamed El Amin Nogdalla. No edits made.

And yet. two years after the release of 'Beneath The Skin', OMAM is at it again, working hard on their third, as of yet untitled album. In May of 2017, it was confirmed that one song has already been completed, but save that tasty morsel, the band is tightlipped on what their fans can expect in the upcoming year.

The band's last live appearance was at the Latitude Festival in June 2016, the final show on a festival circle that included Glastonbury, Secret Solstice, Firefly Music Festival and Tinderbox Festival. In the last year alone, this rag-tag group of Icelanders have travelled and performed across the planet; with each concert, festival or simple living room jam, the band has furthered Iceland's reputation as one of the premiere sources for earth-shattering musicians.