15 Incredible Photographs of the Holuhraun Volcano in Iceland

Iceland is the land of ice and fire. With one of the largest volcanic eruptions in Icelandic history having recently taken place in Holuhraun, by Bardarbunga, this statement couldn't be more true.

Iceland is full of volcanoes, that erupt quite frequently but have never directly killed or harmed anyone in the country. In fact, these forces of nature attract many visitors and there is a variety of volcano tours on offer. To see this particular area, you can go on a 3 day super jeep tour! 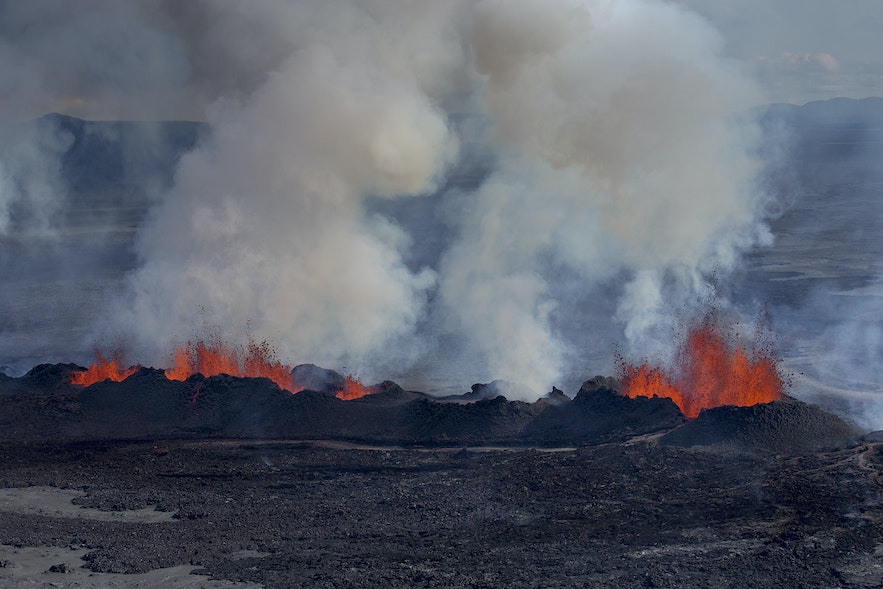 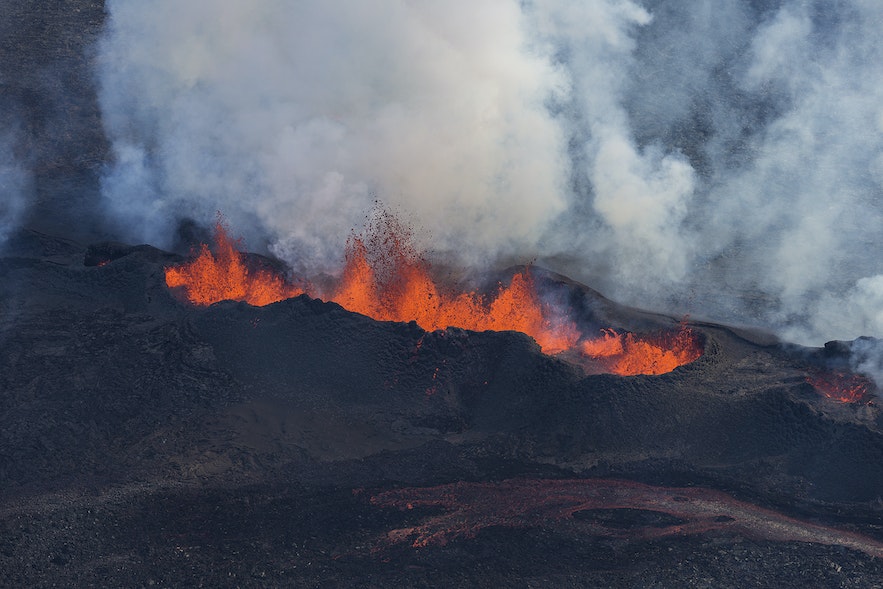 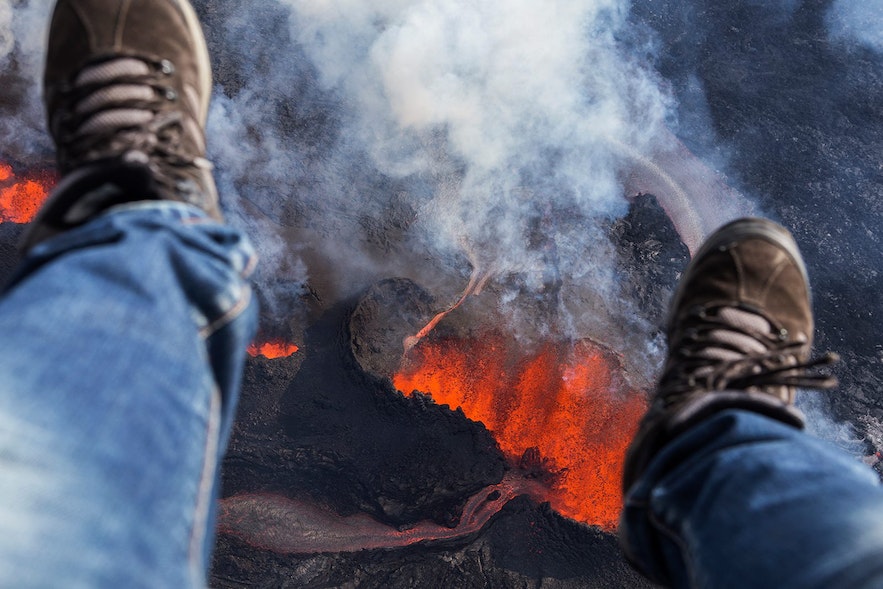 Yes and No. If you go to see an erupting volcano just make sure you go with professionals that know what they are doing. If you decide to go on your own, that's when it becomes dangerous.

Although I wouldn't recommend dangling your feet over a volcano like Iurie is doing in the picture above, I would highly recommend going to see a volcanic eruption in Iceland.

Overland travel was not allowed until the eruption had subsided, so the only way to witness it was to fly over it. An eruption shouldn't make you scared, in fact, it's a fantastic opportunity to see an erupting volcano with your bare eyes! Although the eruption has now stopped, you can still go on a helicopter tour over the area of Holuhraun and admire the new landscape! 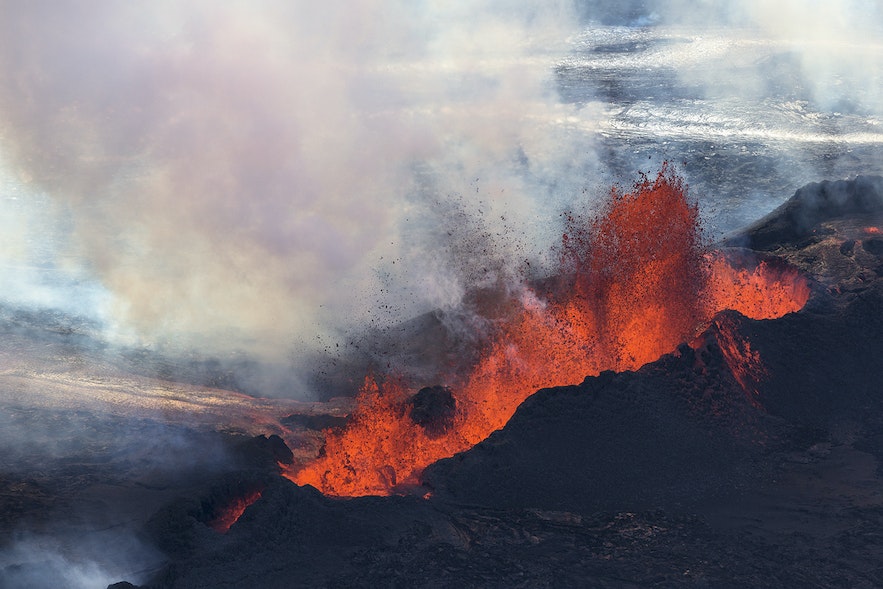 The eruptive activity itself was fairly tame, no giant ash plumes disrupted air travel - and indeed all airports, international and domestic, stayed open. There were some highland closures for overland travel but mainly travel agencies were waiting to be able to offer overland travel.

The eruption produced a great deal of lava flow but not enough ash to ground flights like many people remember from the Eyjafjallajökull volcanic eruption in 2010. 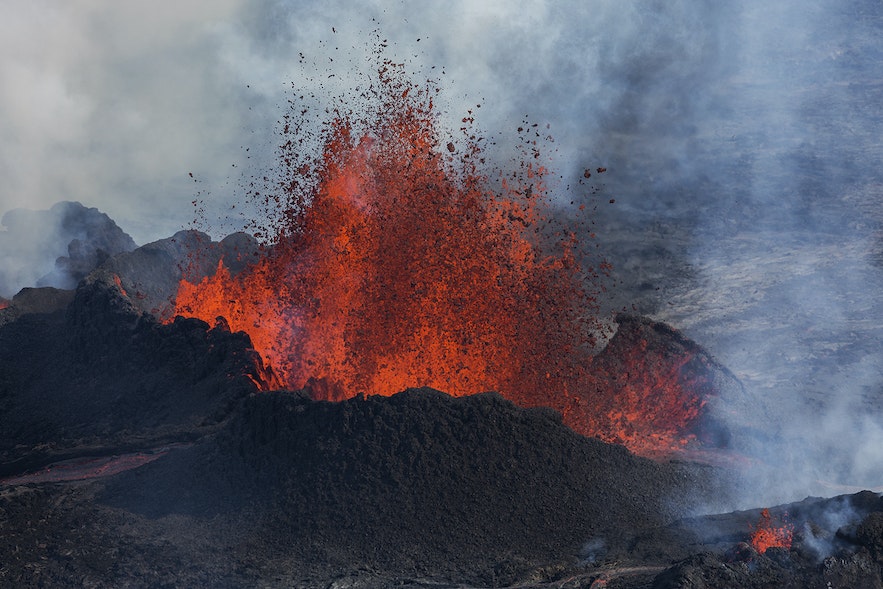 Where is Bardarbunga Volcano and How Big is it?

Bardarbunga is a strato-volcano, located underneath approximately 500 metres of ice in Vatnajökull glacier. Bardarbunga is one of Iceland's most extensive volcanic system, approximately 200 km long and 25 km wide. The caldera is about 70 square km, up to 10 km wide and about 700 m (2,300 ft) deep. The highest peak of Bardarbunga is 2009 m, making it the second highest mountain in Iceland. 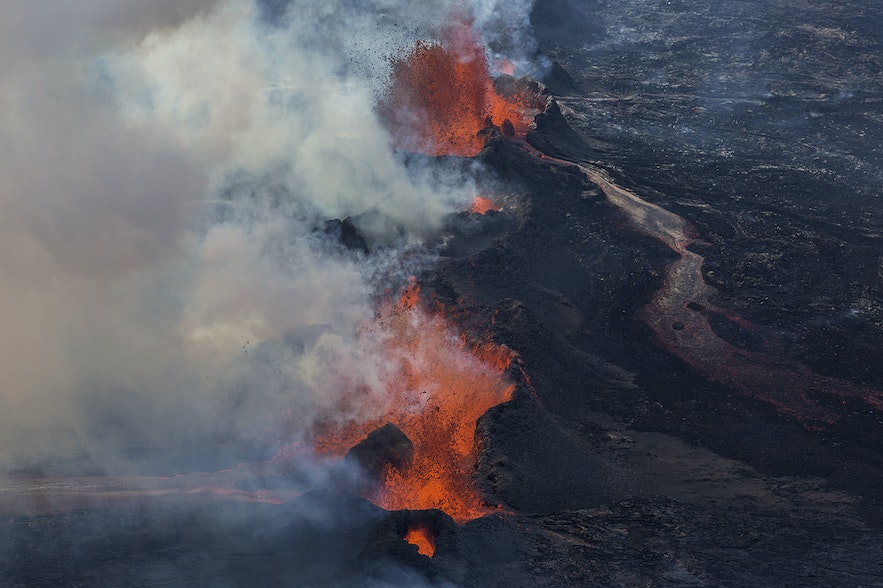 How many Times has there Been an Eruption in Bardarbunga Volcano?

Bardarbunga has had about 300-400 eruptions during the past 10,000 years, which includes only 23 eruptions in historic times (approximately the past 1000 years). 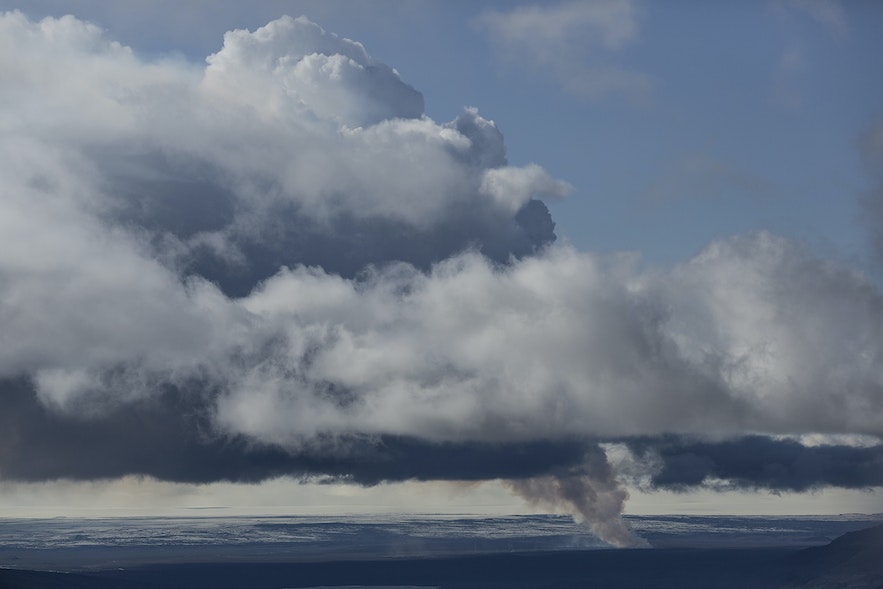 How Long is the Holuhraun Fissure?

The eruption fissure at Holuhraun eruption was about 3 km long. There was a steady flow of lava, that created a new lava field that covers over 72 square km. 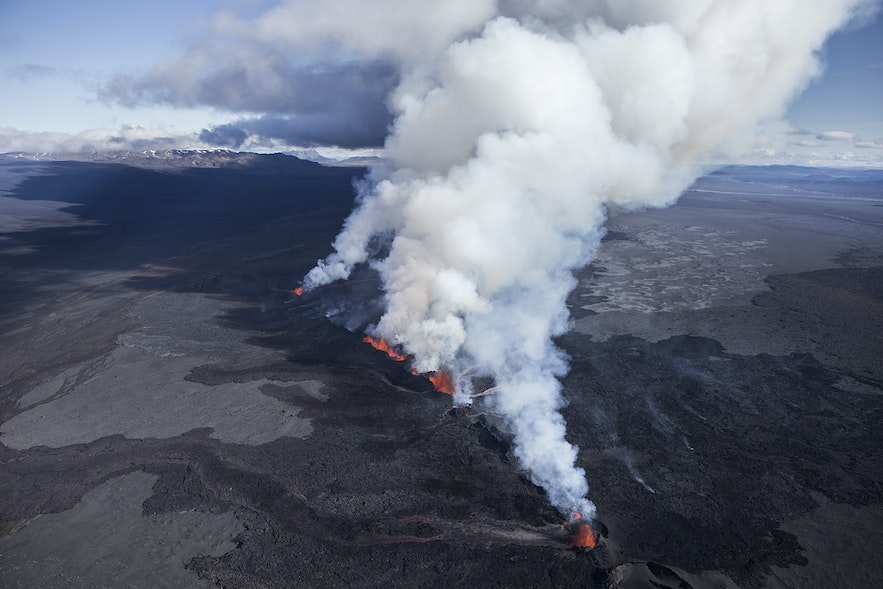 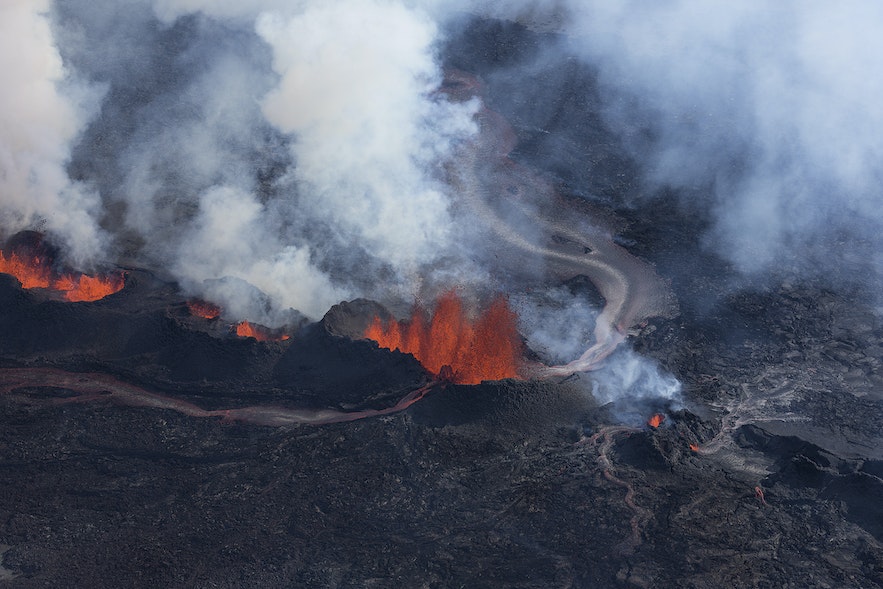 Ginger Zee from Good Morning America on ABC news channel came to see the volcano eruption at Bardarbunga - and brought drones with her! Spectacular footage from inside the fissure was caught on camera, some of which you can see here. 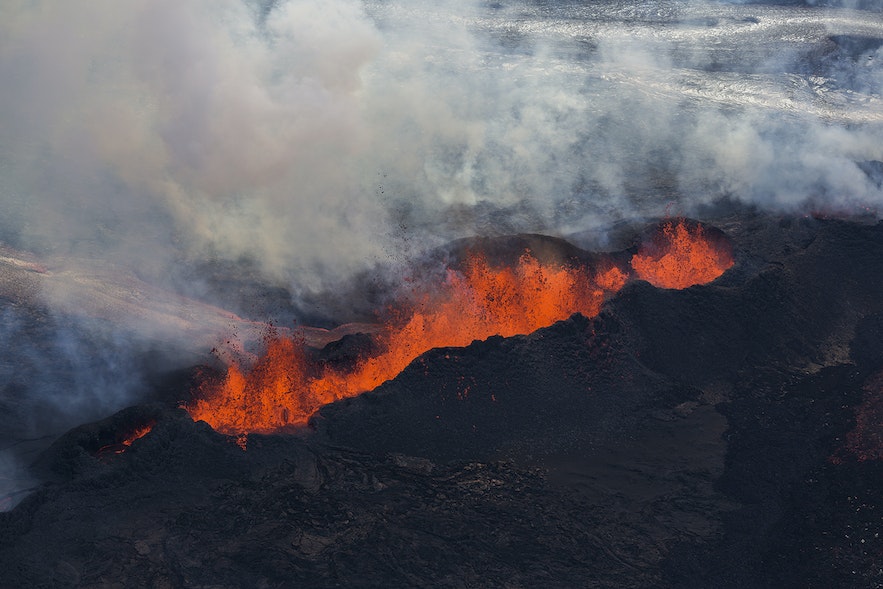 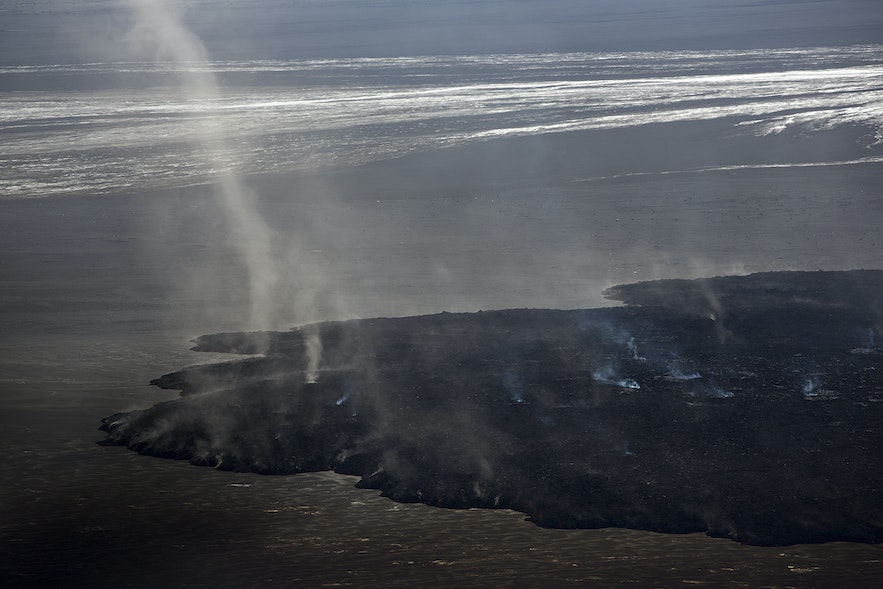 Witnessing a volcanic eruption is a limited opportunity - and any landscape photographer's dream!

These spectacular pictures of the volcanic eruption were taken by our talented co-founder, Iurie Belegurschi. You are free to use them for your blog and website, without cost, if you reference Guide to Iceland with a link.

Who knows when the next eruption will take place? In the meantime, you can still come and enjoy Iceland's breathtaking nature. If you're here in wintertime, you might even catch the Northern Lights dancing overhead! 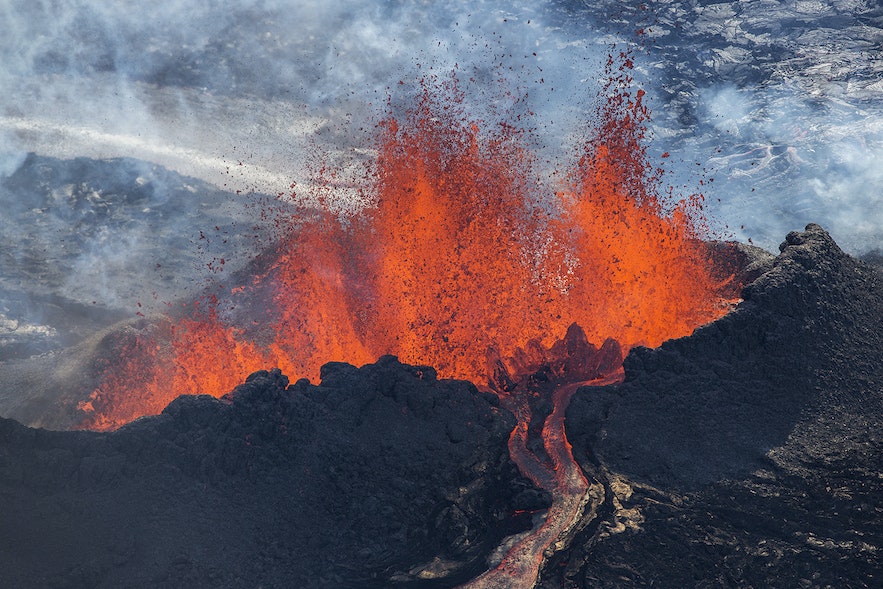 Find Golden circle tours or see the best attractions by Route 1 in Iceland.