The Best Time to See the Northern Lights in Iceland

Learn the best time of year to see the northern lights in Iceland. Find out which are the best seasons and months for viewing the aurora borealis in Iceland.

The northern lights are one of nature's most magical sights, but they're also one of the most unpredictable. Maximize your chance of seeing nature’s most spectacular light show with this complete guide before embarking on a northern lights tour or renting a car on Iceland's biggest travel marketplace.

Iceland’s northern lights are one of its major attractions, but the aurora borealis are fickle. They’re only visible under certain conditions, at certain times of the year, and only with enough solar activity. Knowing when you can see the northern lights in Iceland is essential for ensuring you have the best chances of a once-in-a-lifetime viewing. 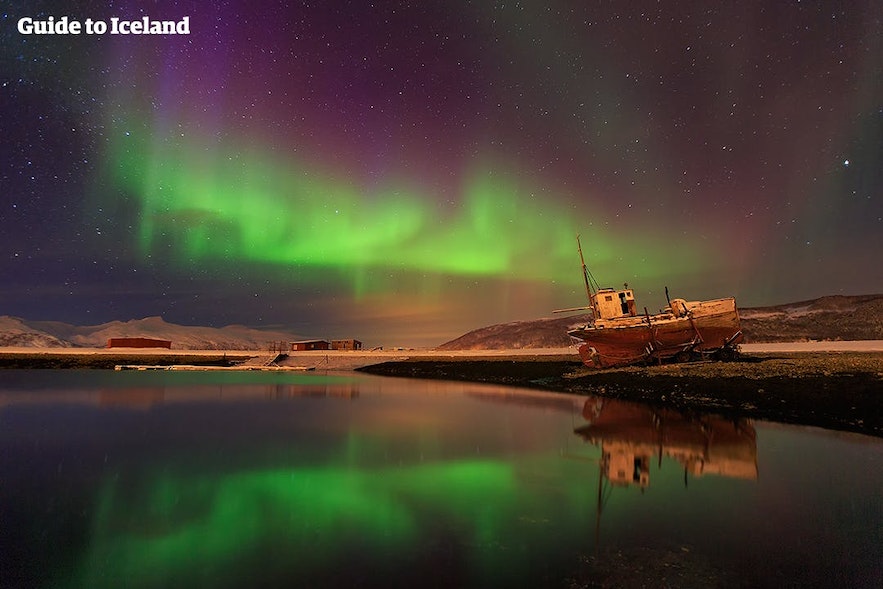 When Is the Best Time to See the Northern Lights in Iceland in 2022?

The best time to see aurora borealis in Iceland is between September and April. It’s when the nights are dark enough to see the aurora.

Iceland only gets 4-5 hours of daylight in midwinter, providing endless opportunities to hunt for aurora borealis during that time. 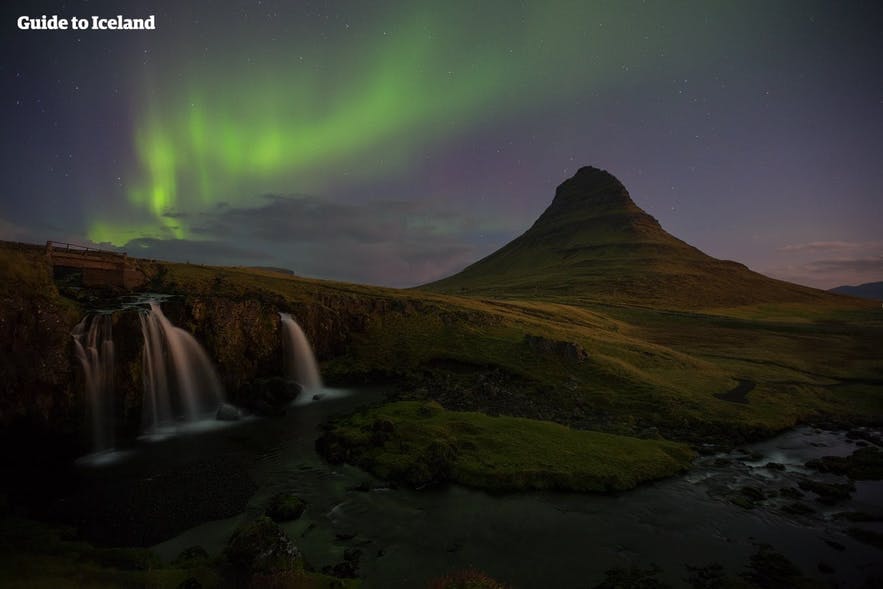 What Is the Best Month To See the Northern Lights in Iceland?

Northern lights tours run between September and April. While there’s no particularly optimum time between this range, the nights are the darkest from November to January. This means you can seek the aurora in Iceland from late afternoon until nearly noon the next day, which provides perfect conditions to photograph the northern lights.

This makes January the absolute best time to visit Iceland for the northern lights in 2022, although you have a good chance to spot the aurora borealis in Iceland until April. Then it’s a long wait until September. 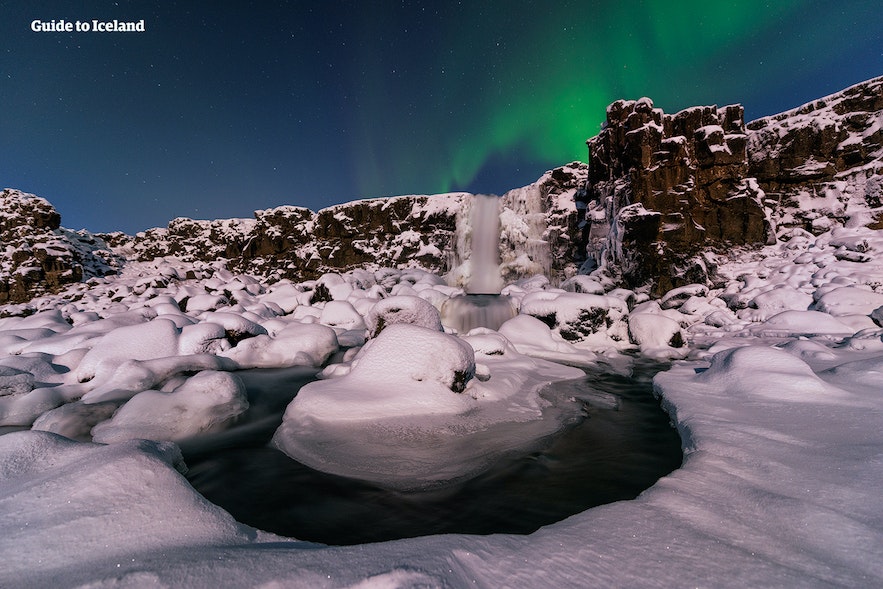 Another advantage of coming in midwinter is that you can see Iceland under a blanket of snow and make the most of Iceland’s other winter phenomena, most notably exploring the crystal blue ice caves, which are only found in a few other places worldwide.

When Can You See the Aurora Borealis in Iceland?

The northern lights appear whenever there’s solar activity, but we can only spot them when it’s dark. Therefore northern lights tours only run in the winter months as the longer nights make the aurora borealis easier to spot.

In general, northern lights are visible between late August and mid-April in Iceland. But that also depends on several other factors. For the best time to go to Iceland for the northern lights, it’s best to aim for the weeks around the winter solstice.

What Are the Best Conditions to See the Northern Lights?

The solar wind is the reason behind the appearance of northern lights. The Kp-index forecast is the measurement unit used to indicate the level of solar activity. The optimum level is above three, and you can check this on the Aurora Forecast in Iceland.

The Icelandic Meteorological Office also has an aurora forecast on cloud covers in Iceland to help you find the best place to spot northern lights.

3. As Little Light as Possible

So there is no straight answer to when you can see the northern lights in Iceland since it isn’t just dependent on the season or month, but also the meteorological and solar conditions.

Can You See the Northern Lights in Iceland During Winter?

The best time of the year to see the northern lights in Iceland is undoubtedly the winter months. However, throughout these months, Iceland endures its worst weather. 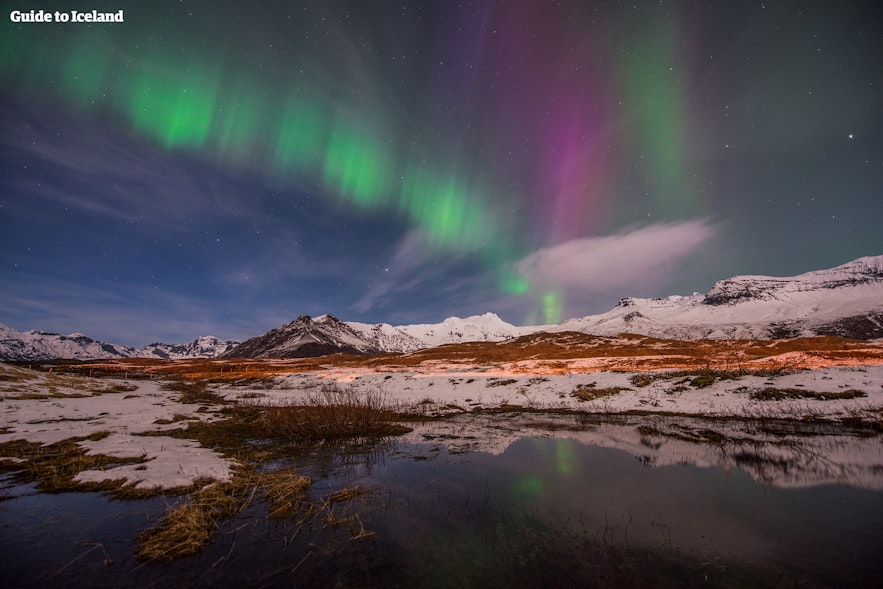 Clouds can block the sky, and therefore the aurora borealis, for weeks at a time. Storms are also more common this season, occasionally leading to the cancellation of tours or the closure of main roads.

Three are still plenty of winter activities in Iceland you can enjoy. You can go ice caving, snowmobiling, and glacier hiking before setting out to explore the northern lights each night.

Can You See the Northern Lights in Iceland During Autumn and Spring?

Iceland’s weather is milder in autumn and spring (if still very unpredictable), meaning less chance of cloud cover, although note that the window of opportunity for northern lights hunting is smaller due to the increased daylight hours. 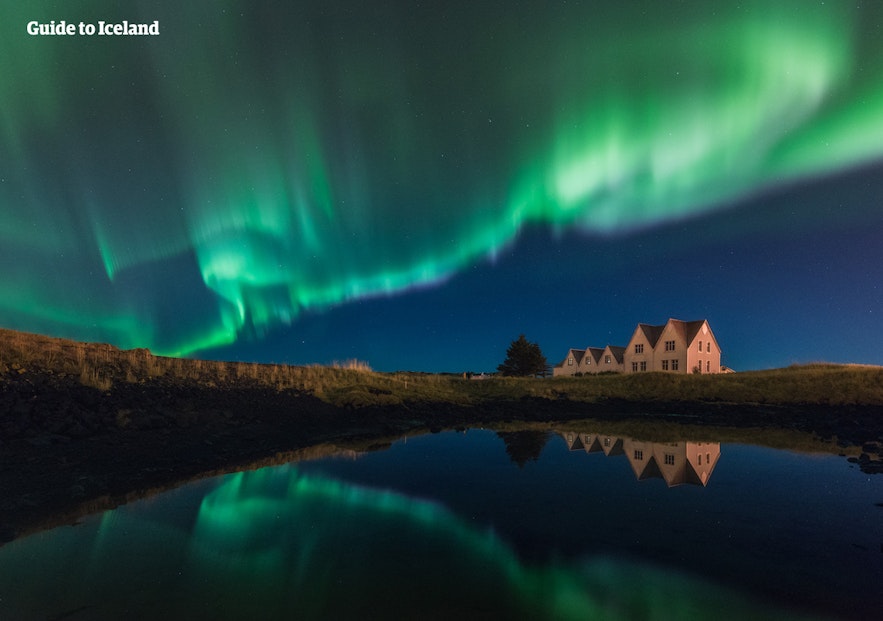 However, many summer tours extend into these months, allowing you to do more when the auroras are not visible. The Thrihnukagigur Inside the Volcano Tour continues until October and will enable you to descend into and explore a vast, unbelievably colorful magma chamber.

Whale-watching from the whale-watching capital of Europe, Husavik, begins in March and lasts until November, providing you the chance to marvel over the giants of the deep.

Keep in mind the best time for northern lights in Iceland is the winter months. However, seeing them in late autumn and early spring is still possible.

Can the Northern Lights Be Seen in the Summer? 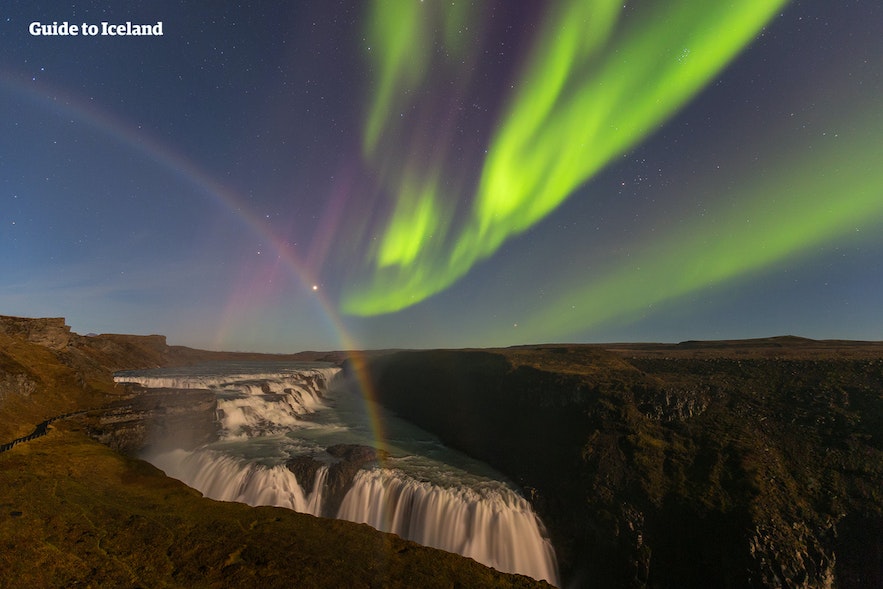 In the summer equinox weeks at the end of June, the sun never sets in Iceland. Instead, it circles the sky, touching the southern horizon but never quite sinking below it. The brightness of this ‘Midnight Sun’ entirely obscures the northern lights. Through the end of May, the entirety of June and July, and the beginning of August, the nights are still too bright to see the auroras.

Despite this, you can still see the aurora borealis faintly during the short hours of darkness at the very beginning and end of summer. Usually, they will be seen dimly against a dusky sky, often making for a uniquely beautiful display considering how vivid the colors of Iceland’s sunsets can be.

Even so, you have much less chance of seeing Iceland’s aurora borealis during these times, as they will need to be particularly intense to be visible, and there’s a much smaller window of opportunity to seek them. Suppose you want to see the aurora borealis in Iceland while still enjoying relatively mild weather and the option to partake in most summer activities. In that case, it’s recommended you come in September.

What Time of Night Is Best To See the Aurora Borealis in Iceland? 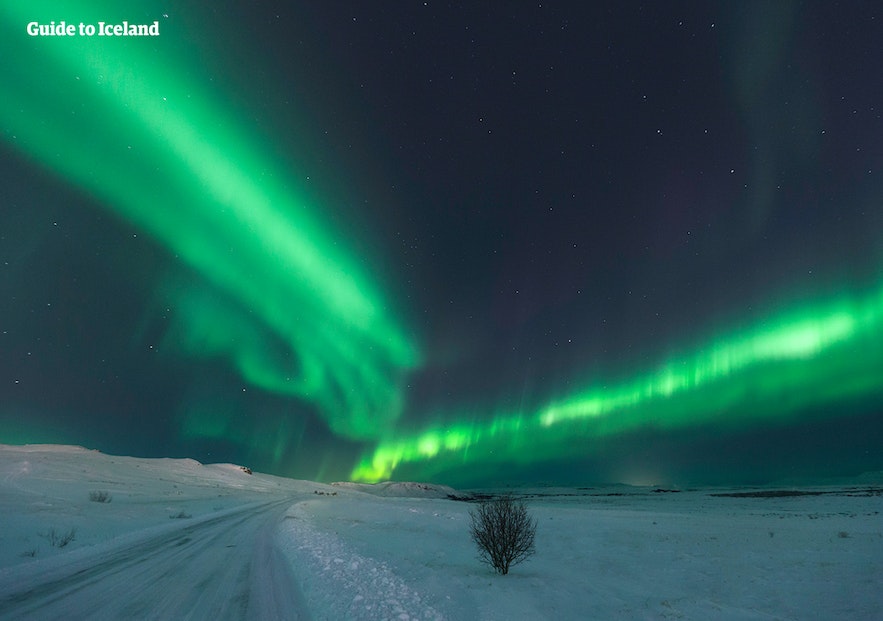 You can see the aurora borealis in Iceland whenever the sky is dark. Therefore, in December, they may be visible from three in the afternoon until nine in the morning. However, due to the Earth’s rotation, atmosphere, and magnetosphere relative to Iceland’s position on the globe, they are most likely to be seen between 10 PM and 12 AM.

This is when most northern lights tours set off. It also means that when the tours end, you’ve searched through the optimal time and back home early enough that it won’t compromise your plans the next day.

If you’re renting a car in Iceland and taking a winter self-drive tour tailored to the aurora borealis, you can search for the northern lights throughout the night. But you should remember to avoid sunrise and sunset when light pollution significantly dims them. If you are out well into the early hours hunting for the auroras, it’ll be noticeably colder, so dress accordingly.

What Else Can I Do To Make Sure I See the Northern Lights in Iceland? 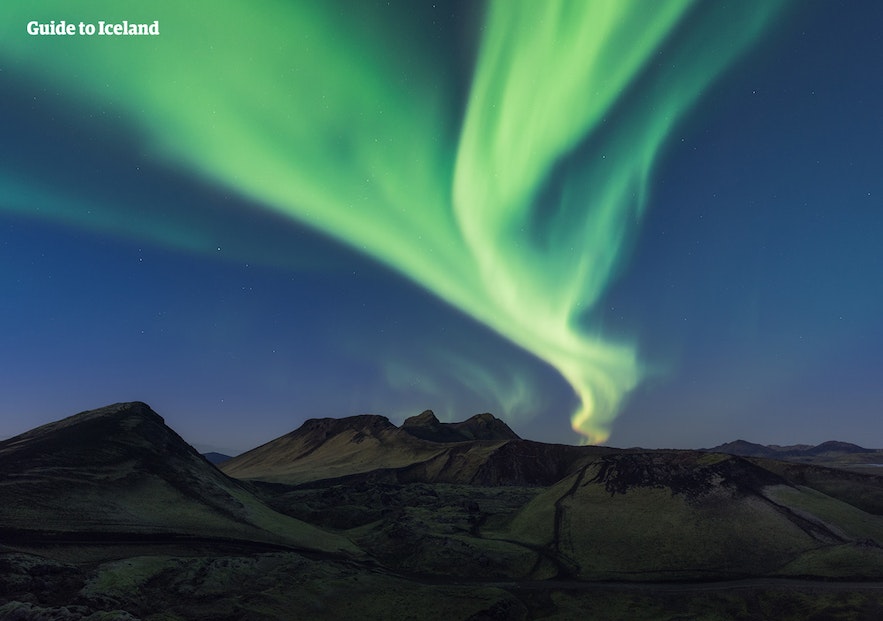 Witnessing the northern lights in Iceland always requires some luck. Some travelers dead-set on aurora hunting may encounter cloud cover or a lack of solar activity every night of their holiday. Others, traveling for one night in August, might be blessed with a fantastic show without even looking for it.

Other than waiting for a clear winter’s night, there are several ways to optimize your chances of enjoying a fantastic display of the aurora borealis in Iceland.

Just hoping you see a northern lights display without laying any groundwork is probably not the wisest option. There are several easy steps you can take to increase your chances: 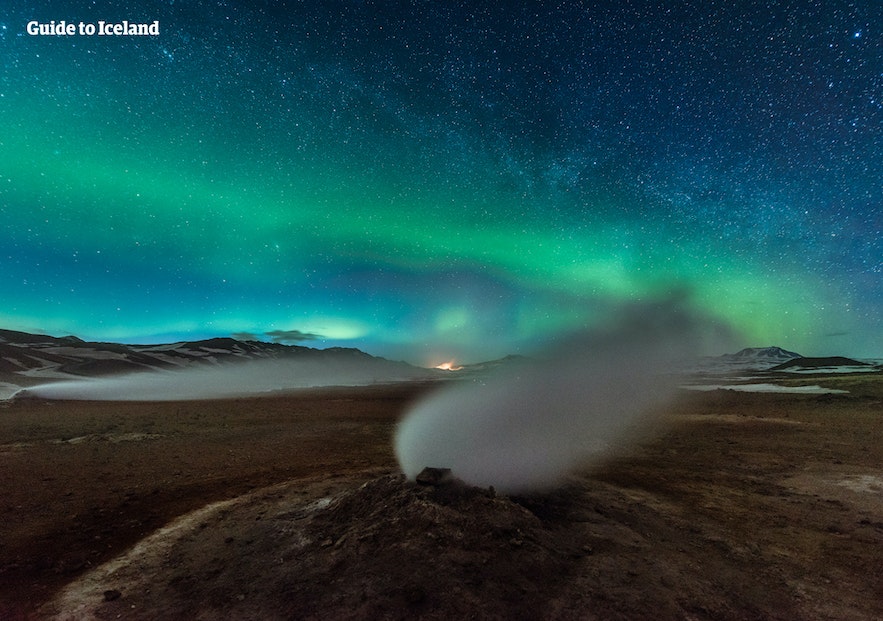 All lights have the same dimming effect on the auroras as the sun. If you’re in Reykjavik and want to see the northern lights, you must move away from the light pollution. You can take a bus to the Seltjarnarnes Nature Reserve, which is fairly dark compared to the rest of the city. However, you are more likely to achieve better results by booking a tour or driving out into the dark surrounding landscapes.

If you are on a guided package or self-drive tour, your route will take you out into the reaches of Iceland’s nature, maximizing your chances of catching a show every night.

2. Extend the Length of Your Holiday

If traveling to Iceland for just a weekend, you only have two or three nights in which to go aurora hunting. Considering the unpredictable weather and fickle nature of the aurora borealis, you’re not setting yourself up for success.

You’re statistically more likely to see the northern lights by staying in Iceland for an extended time.

A two-week-long vacation spent in different parts of the country will significantly increase your chances of a lucky night in perfect conditions.

Travelers could also consider spending much or all of their holiday in North Iceland. The nights here are longer, and the sky is usually less cloudy, providing increased opportunity. During the northern lights season, the north is also less busy than the Reykjavik area, allowing you to avoid the crowds at the most scenic viewing spots, such as the marvelous Myvatn lake or frozen waterfall Godafoss.

Iceland’s weather website has regularly updated pages revealing the predicted and current cloud cover around the country, allowing you to plan to reach the areas with the clearest skies. The aurora forecast measures from zero to nine, with three and above considered promising. 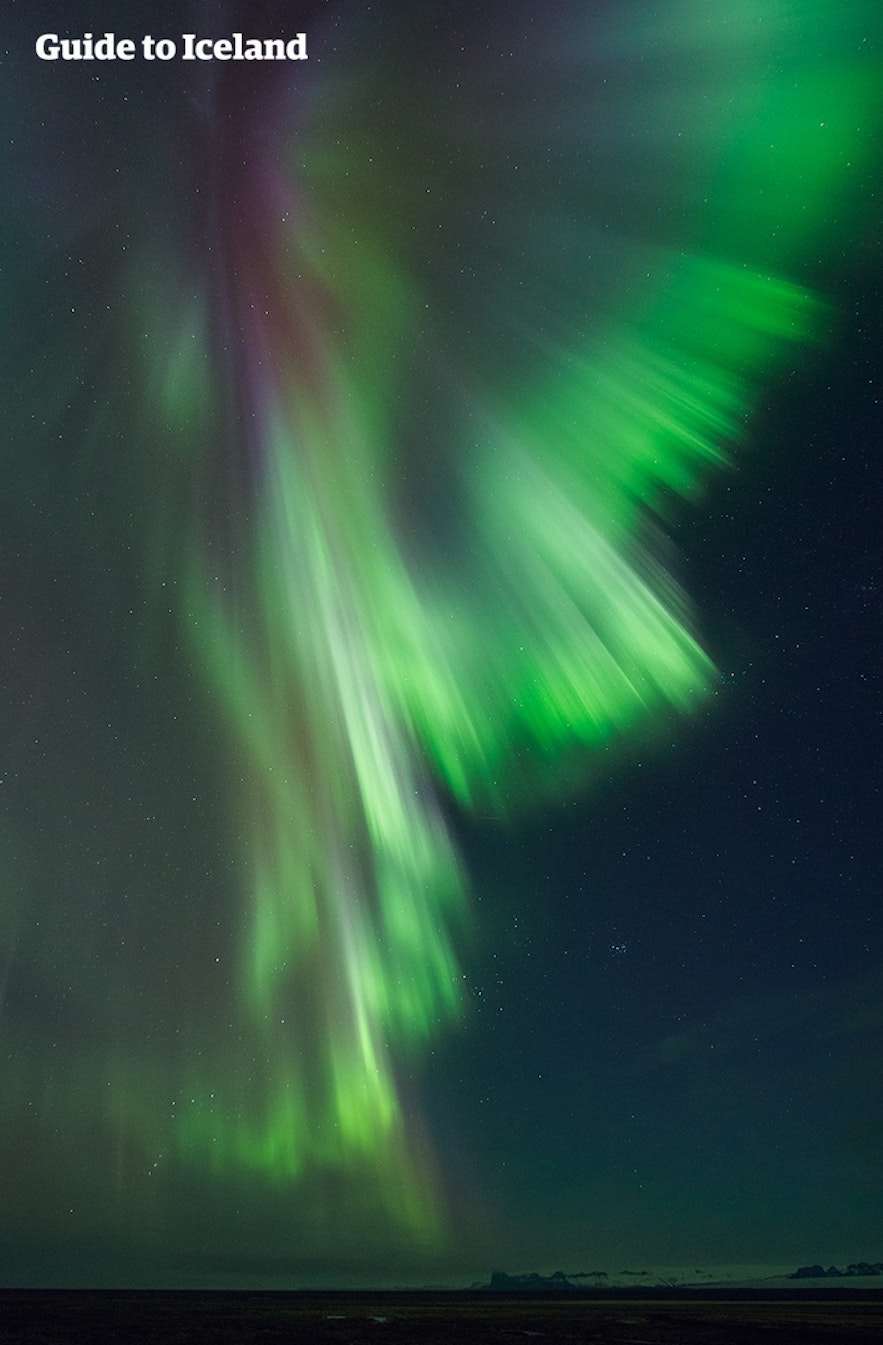 5. Be Well-prepared and Patient

It'll take several minutes for your eyes to adjust to the darkness of Iceland's winter nights, so stay a while at each spot, even if the sky appears clear. The northern lights can also begin at any moment, so don't rush away if they aren't immediately active.

Make sure you have many layers of warm clothes - and perhaps some hot cocoa -so you can comfortably wait for the auroras as long as you need. When it comes to northern lights hunting, just a little bit of patience can lead to the most incredible rewards, which no doubt you will remember for the rest of your life.

Do you have any other questions about hunting the northern lights in Iceland? What time of year are you planning to visit? Are you considering a self-drive trip or taking a northern lights tour? Log in to Facebook to see or add to the comment section below!