Kjarvalsstadir Art Museum is one of the leading art exhibitions in Iceland, part of the Reykjavik Art Museum.

Anyone wishing to visit this Icelandic cultural attraction can purchase a 24-hour Reykjavik city card or a longer 48-hour card with entry to Reykjavik museums. You can also explore the art museum by joining guided tours such as this four-hour private tour of Reykjavik.

Kjarvalsstadir is one of three art museums in Reykjavik, the others being Asmundarsafn and Hafnarhus. All three are under the umbrella of the Reykjavik Art Museum, with different artists and works featured in three separate buildings.

Photo from Wikimedia, Creative Commons, by Helgi Halldorsson. No edits made.

Kjarvalsstadir Art Museum, Kjarvalsstaðir in Icelandic, is nestled in Klambratun park near the downtown area of Reykjavik. It was named after one of Iceland’s most beloved artists, Johannes Sveinsson Kjarval, as a loving testament to his contributions to the Icelandic arts and culture.

The main features of the art museum are the iconic artworks of Kjarval, an Icelandic painter who lived from 1885 to 1972.

As part of the Reykjavik Art Museum, Kjarvalsstadir was the first to break ground in 1966.

At first, the museum only had a small collection of artworks made by its namesake, Johannes S. Kjarval, to put in the exhibition. Fortunately, Kjarval donated his sketches, paintings, and other creations personally to Reykjavik in 1968 to expand their collections.

However, the painter died in 1972, a year before the museum formally opened to the public.

Fans and fellow artists of Kjarval describe him as a classic bohemian artist. He had a mind for romance, yet with the traditional values of living in Icelandic farming society. The two sides came together to make his beautiful, moving paintings that still speak to visitors today.

Most of Kjarval’s paintings and sketches are rooted in themes like nature, mythology, and traditional Icelandic life. As an artist, he used mixes of impressionism, expressionism, and even cubism to show the beauty of Iceland’s landscapes.

One of the most recent exhibitions of the Kjarvalsstadir museum on Kjarval’s works is “Head from Clouds - The Portraits of Johannes S. Kjarval.” It featured some of the best portraits and self-portraits of the Icelandic painter using oil, ink, and watercolor.

Since the museum’s opening, the collection by Kjarval has slowly grown over the years and added more exhibits featuring other artists thanks to donations and purchases. 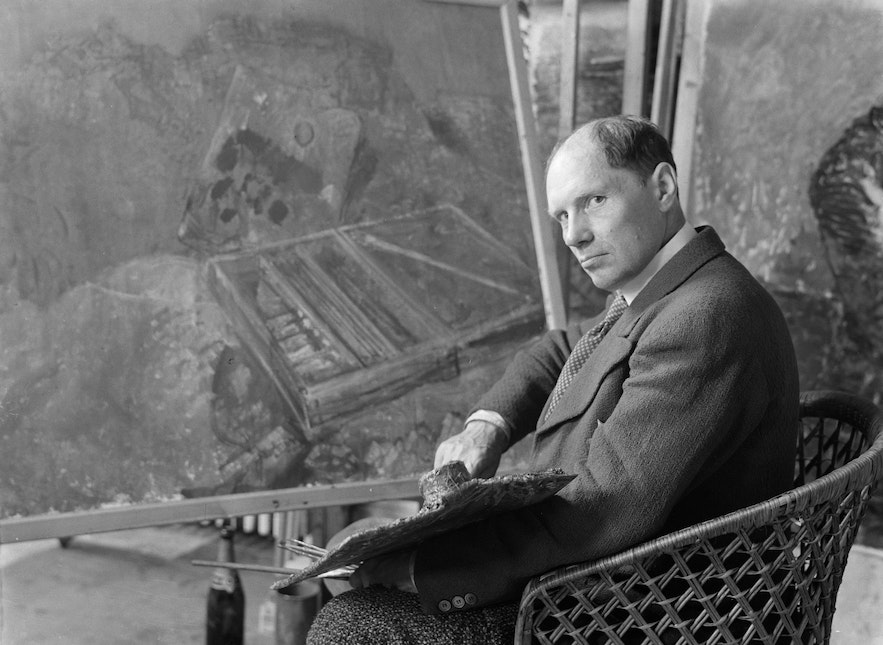 Photo from Wikimedia, Creative Commons, by Willem van de Poll. No edits made.

Apart from the permanent exhibits, Kjarvalsstadir Art Museum periodically features works by other Icelandic and foreign artists. Exhibitions frequently change, but they all offer a rich insight into the artistic talent of painters and sculptors.

Some past exhibitions in Kjarvalsstadir shared with Reykjavik Art Museum include Gunter Damisch: Worlds and Ways, Juliana Sveinsdottir and Ruth Smith: Two Strong Women, and Asmundur Sveinsson: Art for the People.

One of the most recent shows in the museum is the exhibition series featuring some fantastic local artists. The featured artist for 2022 to 2023 is Gudjon Ketilsson and his exhibit Jaeja, a sculptor known for his meticulous craftsmanship.

Another exhibition is titled “Stitches and Threads.” The exhibit shows a collection of various local artists who are all contemporary embroiderers. These artists use thread, needles, and textiles to create art pieces of traditional and modern techniques directly onto fabric.

In addition, the museum tends to feature paintings and sculptures of influential artists like Erro and Asmundur Sveinsson. Sveinsson is a celebrated sculptor, while Erro is a world-renowned visual artist.

Visiting the Icelandic art museum will not only let you admire the paintings and other works of art but also the beautiful architecture of the Kjarvalsstadir building.

The museum boasts a Nordic modernism style of architecture with a focus on open spaces, stone walls, and clean lines. The original architect designed the museum’s interior to house large art installations, from larger paintings to more expansive areas for sculptures.

In addition, the floor-to-ceiling windows of the building are ideal for an optimum viewing experience.

The Kjarvalsstadir Art Museum is an exceptional experience that all visitors should try. The cultural attraction celebrates Iceland’s rich culture and history through the lens of different artists with diverse backgrounds.

The humble beginnings of the museum’s leading artist, Johannes S. Kjarval, serve as an inspiration for Icelanders and artists. The thousands of artworks he produced over 86 years reflect his love for the raw beauty of nature and Icelandic life. The soul that Kjarval brought to his artworks is displayed at the museum for all to see.

Besides the impressive paintings, Kjarvalsstadir of the Reykjavik Art Museum is excellent for outdoor recreational activities. After touring the exhibits, you may go around Klambratun park, where the museum is located.

Klambratun park is a vast public park in Reykjavik that is popular for cultural and sports events. The sprawling green fields of the area are suitable for disc golf and different ball games. There are also other playgrounds here that kids can enjoy.

How to Get to Kjarvalsstadir Art Museum

The convenient location of this art museum in Reykjavik makes it easy to visit for both locals and tourists.

The Kjarvalsstadir lies on the south side of Klambratun park and is near the city center. It is highly accessible, as there are three bus stops along the museum’s perimeter, with one bus stop letting you off near the entrance.

Bikers and those joining Reykjavik city walking tours like this three-hour Reykjavik city walk with a local guide will also find the Icelandic attraction easy to locate. Likewise, if you have mobility issues, just visiting this museum is still a great choice to experience the culture of Iceland, as the area sits on easy terrain.

Although Kjarvalsstadir is one of the first art museums in Iceland to be established, it is part of three museums under the Reykjavik Art Museum umbrella. The exhibits housed in three different buildings in separate locations give curators a chance to highlight Iceland’s culture, art, and history in more strategic spaces.

The second to be built is called Asmundarsafn. This building lies to the east section of Reykjavik near the Laugardalslaug sports complex and park.

The Asmundarsafn was once the studio of Icelandic artist Asmundur Sveinsson. This studio is a magnificent building that showcases Sveinsson’s most significant sculptures throughout his career. In addition, there is also a beautiful sculpture garden outside for visitors to enjoy and a distinctive rounded center dome in the main building.

The final museum is known simply as Hafnarhus. This building lies on the old harbor warehouse in Reykjavik, one of the oldest parts of the Icelandic capital.

Hafnarhus Art Museum has six galleries and a function room where cultural events occur, from concerts to literary functions. The highlights of the gallery are the greatest works of Erro, an influential and famous artist in the global pop art scene.

Other Top Museums in Reykjavik

After exploring the impressive artworks in Reykjavik Art Museum, there are more museums to tour in the scenic Icelandic capital.

Not far from Kjarvalsstadir is another world-famous museum called Perlan. Perlan Museum is the place to visit to learn about the nature of Iceland, from volcanoes and glaciers to wildlife. The site also has an iconic glass dome that gives one of the best panoramic views of the city and its surroundings.

To know more about the thriving wildlife of Iceland, next to see is the Whales of Iceland Museum. While in the exhibition, you will marvel at 23 life-size sculptures of whale species roaming the seas surrounding Iceland.

As the largest whale museum in Europe, you can visit Whales of Iceland by purchasing tours or admission tickets to the Whales of Iceland museum. Once in the area, you’ll enjoy the educational trip with an audio guide voiced by marine biologists from around the world, making it accessible to visitors from any country.

If seeing whale sculptures is not enough for you, you’re lucky because just off the coast of Reykjavik is one of the best places for whale watching. The city is surrounded by the beautiful waters of Faxafloi bay, where whales and dolphins are familiar sights during summer.

By joining tours like this affordable three-hour whale watching tour from Reykjavik or this whale watching and northern lights combo tour, you can have a close encounter with the gentle giants of the sea. Some of the whale species you may see include humpbacks and minke whales.

Top Attractions to Visit Near Reykjavik

Reykjavik is considered the jumping-off point for many adventures in the land of fire and ice.

The most visited and popular in Iceland outside the capital city is the Golden Circle. The tourist route covers 190 miles (300 kilometers) along some of the most diverse nature views, including the Thingvellir National Park, Gullfoss waterfall, and the Geysir geothermal area.

Thingvellir is a place of geological wonder as it is the only place on Earth where you can walk between the rift separating the Eurasian and North American tectonic plates.

On the other hand, Gullfoss waterfall and Strokkur in the Geysir area are two attractions that showcase the raw power of nature. While Gullfoss flows down a cliff of 105 feet (32 meters), Strokkur shoots boiling water 66 feet (20 meters) into the air. 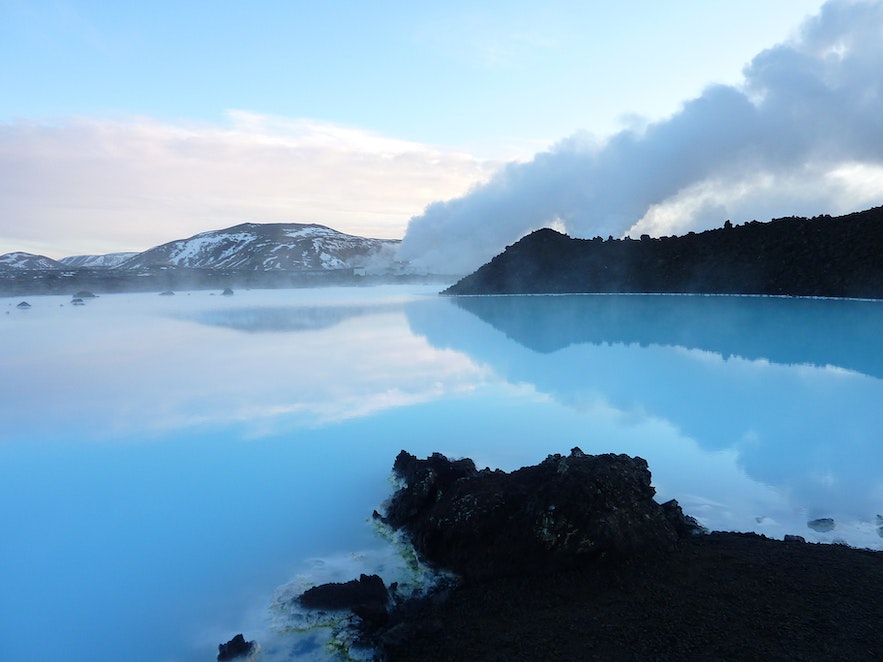 Finally, after a day or week of touring Iceland, the best way to relax is through a hot spring bath in the Blue Lagoon spa. The Blue Lagoon is the perfect place to experience the famous Icelandic geothermal bath with its mineral-rich milky blue waters.