Who is Páll Óskar? Why is Páll Óskar considered the King of Icelandic Pop? Where can you see him perform today? Read on to discover all about one of the biggest figures on Iceland's musical and cultural scenes.

Since his first solo album Stuð ('Groove') in 1993, Páll Óskar has made enormous waves on the Icelandic music scene. As a flamboyant, theatrical, openly gay man, his outrageous fashion and charm have been as much of a subject to the nation as his incredible vocals and unquestionable creativity.

Rising in the musical scene in spite of the odds, he is now a household name and one of the country's most loved public figures. 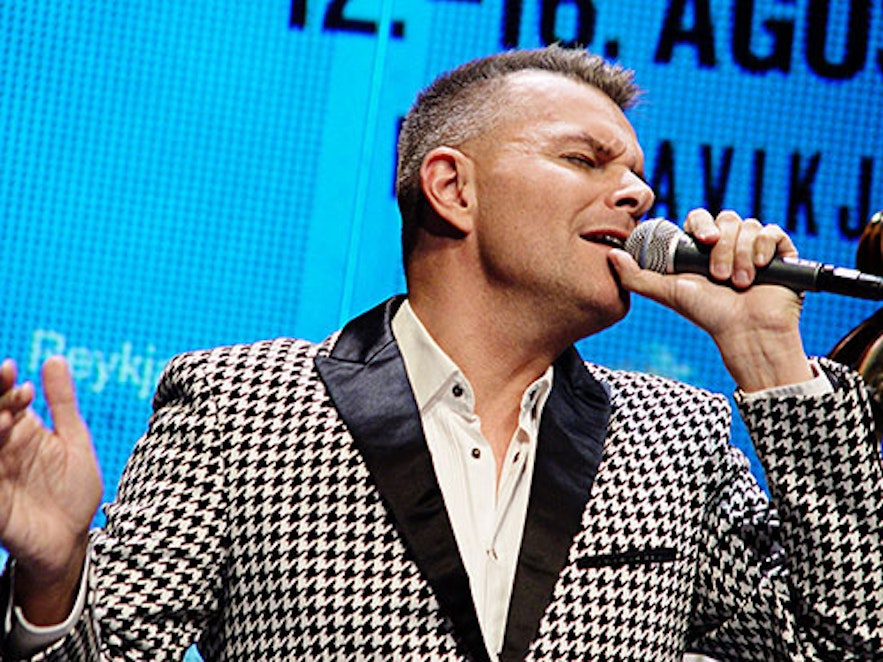 Photo by Wikimedia, Creative Commons, by Hreinn Gudlaugsson. No edits made.

In spite of nearly three decades of changes to music, style and culture, he has managed to stay relevant, surprising, and respected. The only Icelandic artist who can truly say they share his talent for reinvention and lasting presence is Björk.

Ask any Icelander the same question, and they are sure to have a different answer as to their favourite Páll Óskar moment or performance. Some might refer to his 2011 Christmas Eve performance at that Fríkirkjan Church in downtown Reykjavík; others may remember his extravagant displays at Reykjavík Pride.

The main reason for Páll Óskar's appeal amongst such a diverse group of fans is the fact that his performance style varies so dramatically.

While in some moments, he may be surrounded by latex unicorns dancing to electro-pop beats, he is just as likely to be found humbly dressed singing a traditional Icelandic ballad; you may see him quietly in a DJ booth, bringing a night out to life, or else entertaining the 20,000 who come to the Þjóðhátíð music festival in the Westman Islands every year.

His sincerity is as authentic as his sense of fun, and thus Icelanders of all backgrounds find something in him to relate to.

Photo from Wikimedia, Creative Commons, by Tanzania. No edits made.

Of course, however, it must be said that he has a special place in the heart of his LGBTQ+ audience. In the early 1990s, like in the rest of Europe, it was a much more difficult time to be openly gay in Iceland, let alone proudly so. He was thus one of the first media figures to provide a role model to a more persecuted generation who were fearful of being fabulous.

He is still heavily invested in the community, and though his controversial opinions sometimes get eyebrows raising and tongues waggling, is beloved throughout it. He organises regular events to help keep life pumping in Iceland's queer scene and is the main feature almost every year at Reykjavík Pride and the Reykjavík Rainbow Festival.

Since 1993, Páll Óskar has gone through many transformations, performed in many styles, and appeared in as many outrageous costumes as Cher, Madonna and Gaga put together, below are just a few select examples that point as to why he is such a cultural icon and Iceland's undisputed King of Pop.

Páll Óskar's Icelandic cover of Gloria Gaynor's eternal anthem 'I Am What I Am' has come to define the annual August Pride festivals in Reykjavík; they feel incomplete without one of his heartfelt renditions. Taking a song with such history and power, and making it your own, is no mean feat, but ask most Icelanders which version they prefer, and they will likely say Páll's.

Though clearly not one of his originals, many who know little of Páll Óskar's wider portfolio will still likely associate him with this classic number. Above you can see him sing it on stage inside Harpa Concert Hall with the Iceland Symphony Orchestra.

The mid-90s were the years where Páll Óskar soared to stardom, and his 1996 album Seif helped establish an outrageous, sexualised and unconventional image that would propel him into Eurovision the following year. While clearly very nineties, Páll was doing something in Iceland that no one else was thinking of and no one else could compare with.

The music from his early career has not lost an iota of popularity. Songs such as Stanslaust stuð are still played in bars and on dancefloors across Iceland today.

Allt Fyrir Ástina is Páll Óskar's most watched Youtube video and encapsulates his style perhaps better than any other. The polished and cohesive visuals, the seriousness of the lyrics and the cleanness of the choreography all point to an artist who takes serious professional pride in their work, while the campy costumes, bright colours and pop tunes all stay true to Páll's roots in the 1990s and Eurovision Song Contest.

As mentioned above, Páll Óskar is anything but one note. Throughout his career, many of his numbers have proved that he does not need to sing in Icelandic, dress extravagantly, or rely on special effects or backup dancers to sell a beautiful number and deliver an excellent performance.

1995's 'Anyone Who Had a Heart' proves he is a diverse artist and justifies his wide fan base.

Through dabbling in drag, having a perfect knowledge of his references, and using his great comedic timing, he has pulled off bizarre and brilliant impersonations that have ensured he has never gone stale in the public eye.

Páll Óskar is by far the most known gay man in Icelandic society and is especially popular amongst young kids. So when the kid's TV show Stundin Okkar wanted to address homosexuality in one of their episodes, it made perfect sense to get Páll Óskar to play the leading role (against another well-known actress, Nína Dögg Filippusdóttir).

Above you can see a short and simple sketch aired on Icelandic TV in October 2015, with English subtitles, that quickly went viral and was celebrated by LGBTQ+ communities around the world. In it, Páll Óskar has the simplest explanation for different sexualities; "You don't decide what makes your heart beat, it just beats."

When Reykjavík City Theatre decided to stage the classic Rocky Horror Picture Show in 2018, there was no better fit for the role of Frank'N'Furter as Páll Óskar.

This was not a role that he was unfamiliar with, as he also played Frank'N'Furter 27 years earlier, in 1991, then a high school production.

The high school production was very successful, with 30 sold out shows, and catapulted Páll Óskar's adult career. Up until that point he had been somewhat of a child star, but this role helped him blossom into the star that he is today. And the highly successful 2018 production at the City Theatre, is sure to win over a new generation of admirers for this versatile performer.

Even if many of these acts, particularly outside the context in which they were performed, border on being extremely unusual, one thing about Páll Óskar's performances cannot be denied; the man is an entertainer.

Have you seen Páll Óskar perform live? What is your favourite Páll Óskar moment? Tell us in the comments.