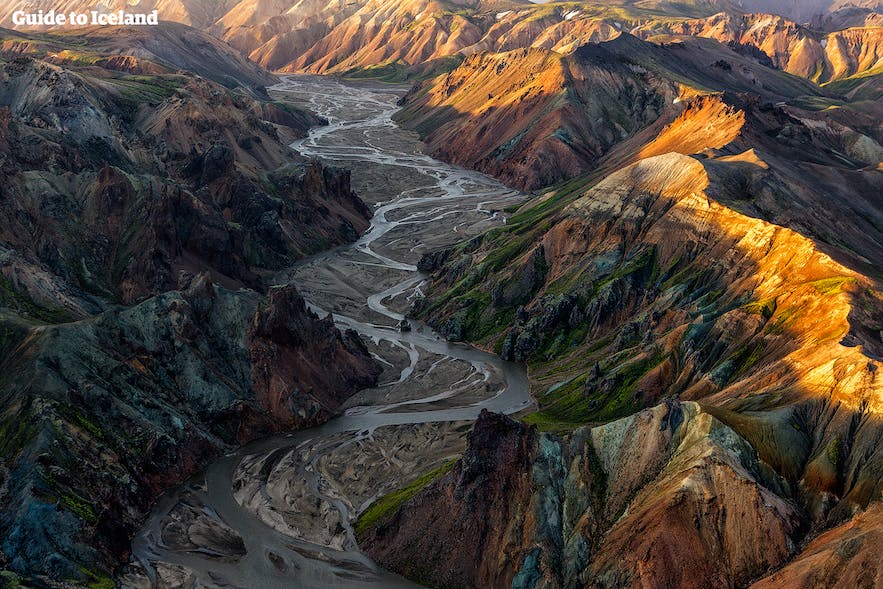 Fjallabak may refer to Fjallabak Nature Reserve, or two highland routes, South Fjallabaksleið or the North Fjallbaksleið. The name 'Fjallabak' literally translates to 'The Back of the Mountains', or 'Mountain Back'.

Take a tour of the Highlands of Iceland to discover more of this region.

Fjallabak Nature Reserve ("Friðland að Fjallabaki") is an area in the Icelandic Highlands surrounding the popular hiking destination of Landmannalaugar, protected since 1979.

The entire area is more than 500 metres above sea level and characterised by colourful mountains, geothermal valleys and volcanic activity. The colour is due to the rhyolite and obsidian making the ground appear green, blue, pink, red and yellow. Lava fields, rivers and lakes also make their mark on this Nature Reserve.

A popular natural hot spring is located at Landmannalaugar camping ground, where visitors will frequently bathe. A mountain hut is also found in the area, perfect for guests to book overnight stays, use the kitchen and the bathroom facilities.

All amenities are basic and very rustic and there are no food or grocery shops available in the area.

The area is most popular with hikers; to reach it a 4WD car is needed as some rivers need to be crossed. Fjallabak Nature Reserve is also only accessible during summertime, as it is covered with thick ice and snow in wintertime.

The area is very dry, sporting scant vegetation as it is situated between mountains that have a strong volcanic activity.  The mountains have left endless amounts of ash, sand and lava in the area which is now covered in moss, creating a truly unique regional look.

In more recent times, another track, North Fjallabaksleið ('Fjallabaksleið nyrðri'), has been laid, connecting the two aforementioned areas. This north track was originally named Landmannaleið by the local farmers who used it.