One of the best ways to enjoy this region is by taking your time while traveling on a self drive tour.

The Reykjanes Peninsula runs along the Mid-Atlantic Rift, where the Eurasian and the North American tectonic plates are drifting apart. Due to this geological setting, the whole peninsula is extremely volcanically active, covered with moss-coated lava fields and cone-shaped mountains.

Despite its location between two tectonic plates, there were no recorded volcanic eruptions there for 800 years. However, that all changed in March of 2021 when Fagradalsfjall volcano erupted. With a glorious display of fountaining red-hot lava, the eruption lasted for 6 months and drew thousands of people to the site. 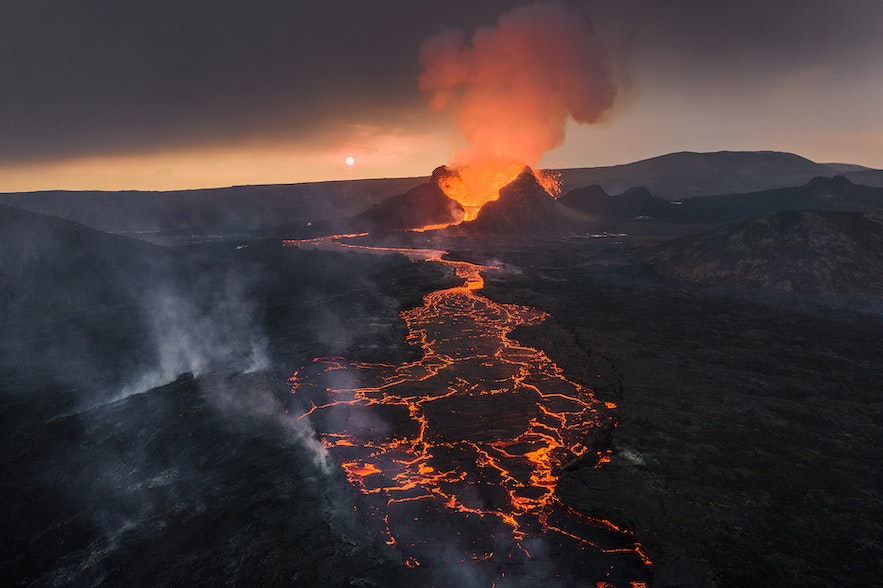 In August of 2022, the Fagradalsfjall volcano erupted again, proving that the previous one was not a fluke. These recent volcanic eruptions have changed the perception of Reykjanes peninsula in the minds of Icelanders, from a sleeping giant to a hotbed of geological activity.

Earthquakes are also common. In 2001, an earthquake beneath the lake Kleifarvatn led to a 25% decrease in the lake's surface area. Since then, hot springs have been bubbling up from the bottom of the lake.

The main geothermal areas of Reykjanes, however, are Gunnuhver, Krysuvik, and Svartsengi. Various mud pools and fumaroles can be seen at Gunnuhver, while Krysuvik is characterized by hot springs and mud pots where minerals turn the soil ruby red, sapphire blue, and topaz yellow. The green crater lake Graenavatn is also an impressive sight.

Svartsengi is home to a geothermal power station that produces 76.5 MW of electricity from the 475 liters of 90° C water that gush from the earth per second. The mineral-rich surplus water fills up the Blue Lagoon spa.

Reykjanes' cliffs are teeming with birdlife. Its best-known bird colony resides in Krysuvikurbjarg which is the nesting place of approximately eighty thousand seabirds. While puffins are not found here, it is an excellent place to spot cormorants, fulmar, and other such species.

North of Krysuvikurbjarg is the aforementioned Kleifarvatn, the largest lake on the peninsula and one of the deepest in Iceland. At the center of the peninsula is lake Djupavatn, a popular fishing destination.

Reykjanes is hammered by some of the most breath-taking breaker waves in the world. A short drive from Krysuvik is Selvogur, where one can witness mighty waves shattering against the rocks. On Reykjanesta, the southwest tip of the peninsula, the waves are known to reach heights of thirty meters (nearly one hundred feet).

Because of this, coastal erosion is ongoing at Reykjanes, and if it were not for the eruptions creating new landmasses, the peninsula would either be much narrower or simply lost to the seas.

The peninsula's north side is dotted with fishing villages and towns, most notably Keflavik, Sandgerdi, Gardur, and Vogar. Grindavik town is located on the south shore of the peninsula. Together, these towns and the towns Njardvik, Hafnir, and Asbru make up the municipality Reykjanesbaer which consists of just over 19,600 residents, making it the fourth largest municipality in Iceland.

Near Keflavik is the Midnesheidi heath, where Keflavik International Airport is located. This is the port of arrival for the vast majority of travelers coming to Iceland.