What kind of caves are there in Iceland, and where exactly can you go caving? What is the difference between ice caves and glacier caves, and are they available to visit all year round? Read on to find out everything you need to know about caves in Iceland.

Iceland is filled with caves of all sizes and shapes. Caves are important in Icelandic history, as many of them have served as shelters for people or animals in harsh winters. Some caves in Iceland are still used as sheds, or barns, for sheep.

Iceland is situated on top of a ‘hot spot’ on Earth, where there are dozens of volcanoes, craters and hot springs. Many lava tubes from the volcanoes have turned into caves, some of the craters have cracks that reveal hidden caves and some of the hot springs are even situated within caves. One example is Grjótagjá, famed for a love scene from Game of Thrones, but it is, unfortunately, not possible to bathe in it.

Essentially, there are four kinds of caves in Iceland: Lava caves, glacier caves, ice caves and man-made caves. The best thing to do on a rainy day in Iceland is either to go swimming or caving!

For any caving experience in Iceland, you will need a helmet, a headlight and some warm and sensible clothing. There are many caving tours to choose from, all of them include helmets and a headlight.

Following are descriptions of some of Iceland’s most beautiful and popular caves. 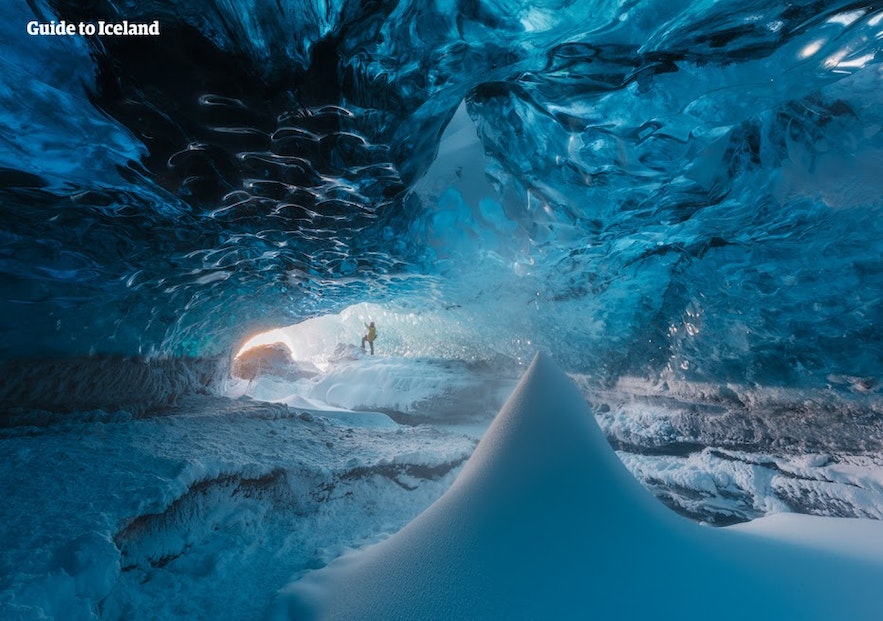 When you come to Iceland you may want to see a natural blue glacier cave, but they are only accessible during wintertime, from approximately mid-October until March. They may open slightly later due to weather conditions, and some operators only take glacier cave tours from November. Glacier caves are often simply called ice caves, but there are also ice caves that may not be inside glaciers - so always make sure to read the description of your ice cave tour so you know what to expect.

Glaciers are constantly moving or crawling, so glacier caves are therefore not permanent and vary in size and shape each year. Most of them are unstable and can collapse and can, therefore, be very dangerous to enter. Most glacier caves start forming by water running through or beneath the glacier or due to geothermal heat from volcanoes beneath the ice. 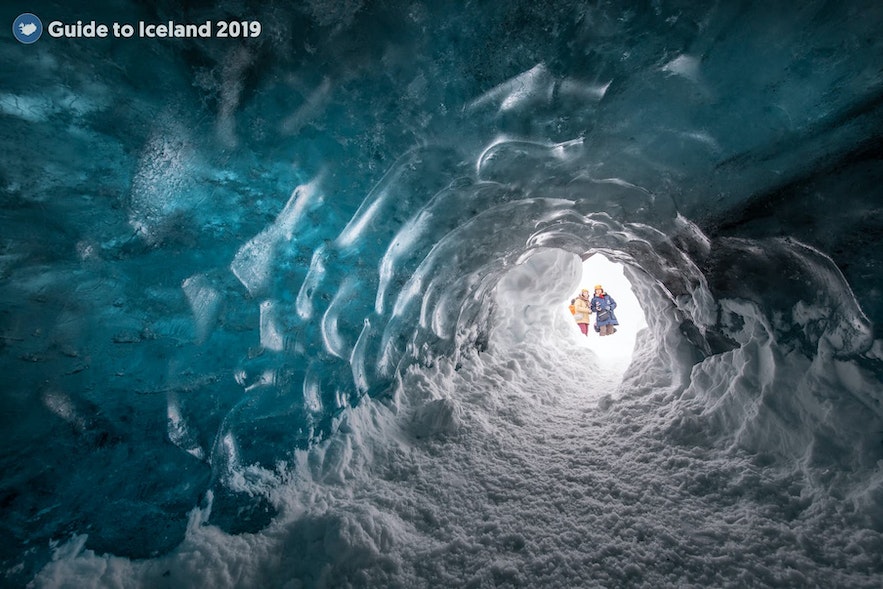 The most known glacier caves in Iceland are formed because of geothermal heat, such as Kverkfjöll glacier caves in Vatnajökull. They were measured to be 2.8 km long with a vertical range of 525 metres in the 1980’s!

If you want to see a glacier cave whilst you are in Iceland, it is best to get in touch with a guide that knows where current glacier caves can be found. They can be hard to find and off the beaten track, your most likely bet is to find them in Vatnajökull glacier, the largest glacier in Europe! 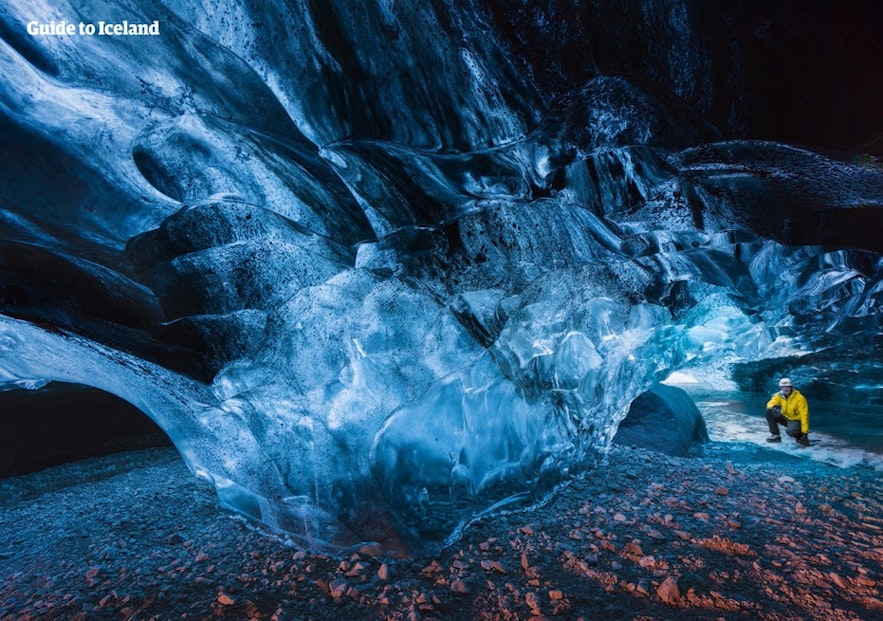 The Crystal Cave is a natural glacier ice cave that has appeared year after year in Vatnajökull glacier since 2011. Like is mentioned above, the glacier caves always vary from year to year, and are only accessible at the coldest time of the year, that is between November and March.

This cave can only ever be entered with a guide, as glacier caves are dangerous and constantly shifting their appearance. You'll be provided with crampons, a helmet with a headlight and possibly even an ice axe before entering the cave.

Although the cave's size, both in height and width, changes yearly, visitors are guaranteed views of blue ice, lined with beautiful patterns of black sand and air bubbles.

This Glacier Ice Cave Tour by Vatnajökull goes to the Crystal Cave when it's accessible. 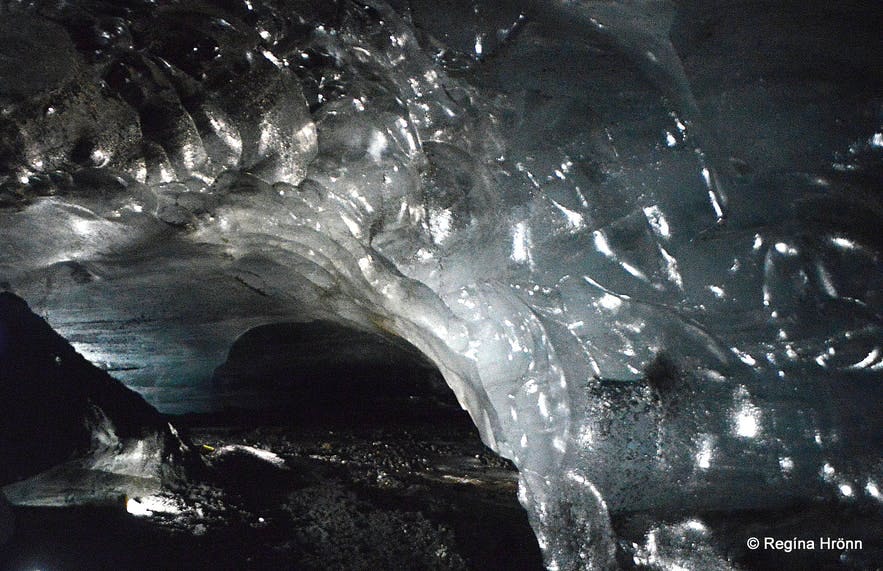 Another natural glacier ice cave, that is actually accessible all year round, is found near the volcano Katla. However, this is a much darker cave, with predominantly black ice, although blue ice can also be seen.

In fact, there are several small caves accessible here, making this a labyrinth of ice and water to explore.

The crater Þríhnjúkagígur, east of the Blue Mountains in Southwest Iceland offers the unique experience of exploring the inside of a volcano.

The volcano has been dormant for the last 4000 years and shows no sign of activity, so you are safe to descend right to its bottom. Reminiscent of a citadel and vibrant in colours, Þríhnjúkagígur offers a fascinating adventure into the earth.

Through the crater's opening, you will enter a humongous magma chamber, one of the most amazing natural phenomenon of its kind. 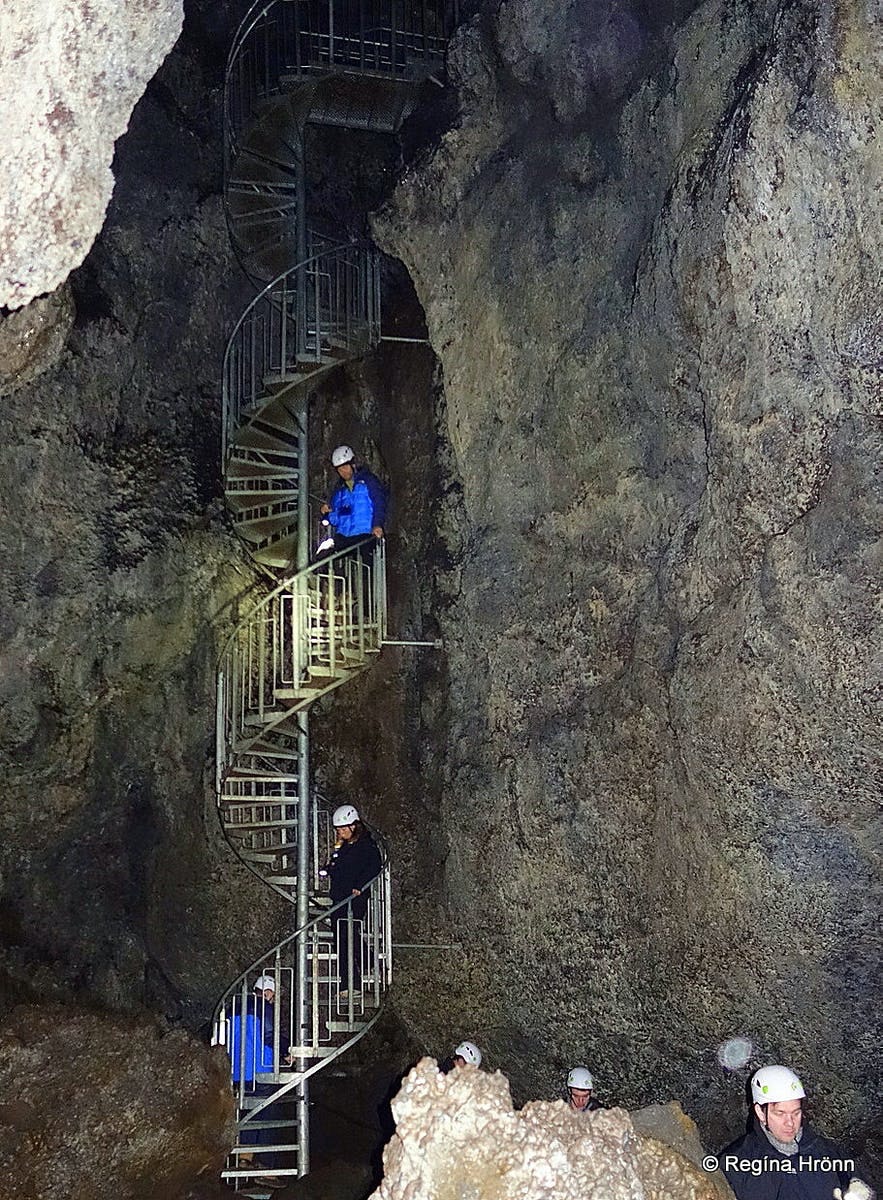 Vatnshellir cave is found on Snæfellsnes peninsula and is only accessible on a guided tour. To enter it one needs to go down a circular staircase and once down, there is a 200-metre long cave that’s very wide and has a high ceiling.

It is necessary to dress warmly and wear gloves because inside the cave it is cold. The guided tour takes about an hour. 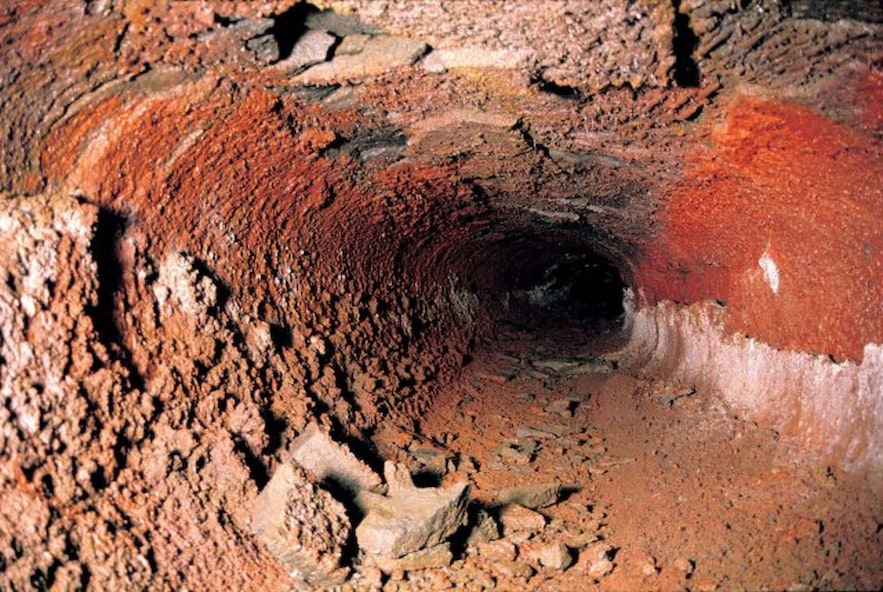 Leiðarendi is notable for its incredibly diverse and colourful scenery and is considered a prime example of an Icelandic lava tube.

A distinctive feature of Leiðarendi is the various lava flakes that have fallen from its walls and roof, due to frost and erosion. The cave walls are polished by lava streams and filled with stalagmites, stalactites and other fascinating formations. In winter you are likely to see glistening natural ice sculptures in the cave, adding further beauty to the already otherworldly scene.

Beware that there is some climbing and crawling necessary when going through this cave.

Various caving tours can take you to Leiðarendi, but you can also explore it on your own if you have good hiking boots, helmets and head torches. The helmets are very necessary due to the low ceiling in parts of the cave. Please go through the cave respectfully, and do not leave your name in the ceiling. 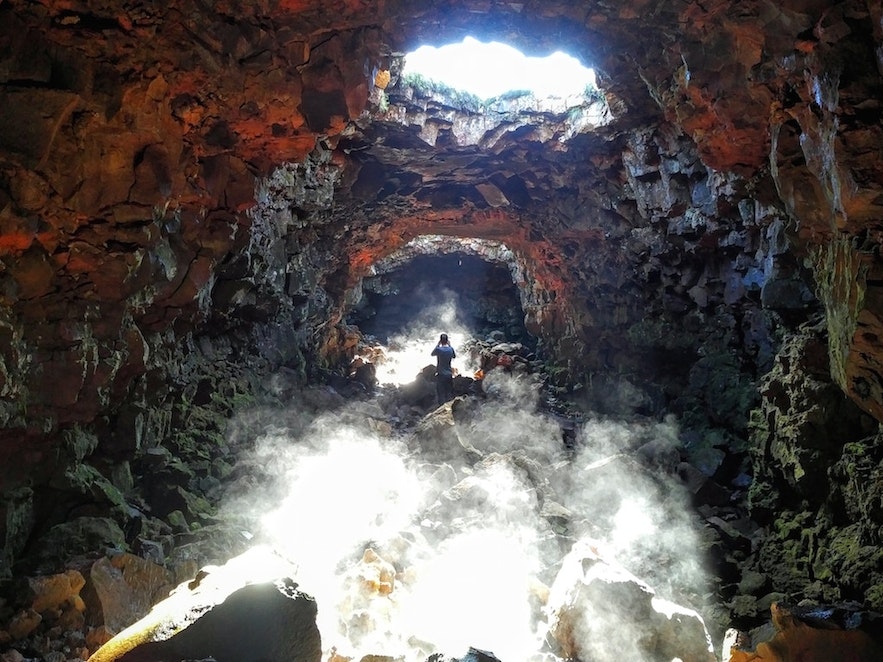 Raufarhólshellir is very near Reykjavík and is the fourth-longest lava tube in the country. This is a very accessible cave, there's no need to crawl through parts of it as it is from 10-30 metres wide (33-99 feet) and up to 10 metres tall (33 feet).

The ground is uneven though, so always do take care when walking through and watch your step.

Three gaps in the ceiling where it has caved in bring in a lot of beautiful light, making the cave very atmospheric and perfect for photographs. Those gaps can also provide beautiful ice and snow sculptures in wintertime.

You can explore this cave on a standard 1-hour tour, with or without a pick-up from Reykjavík, or go on a more extreme 3-hour hike. 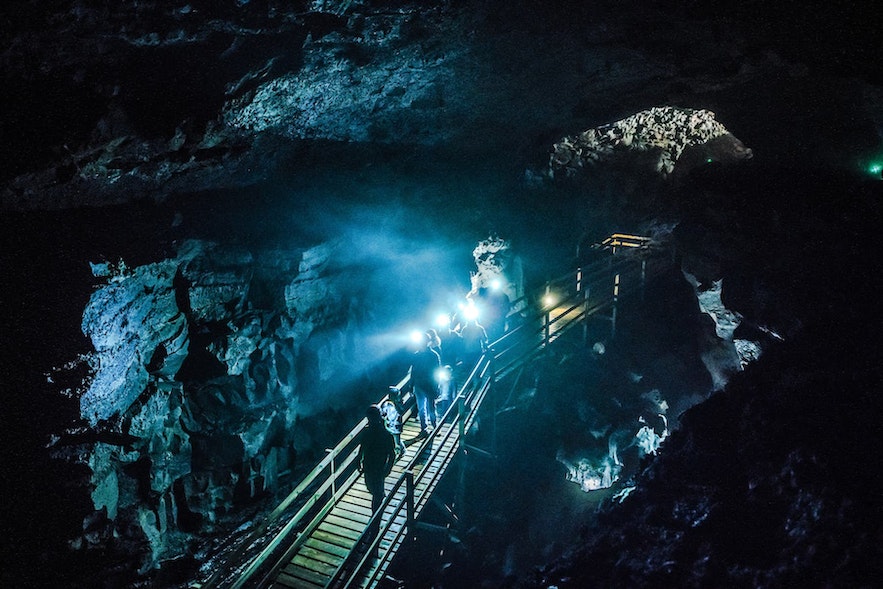 Víðgelmir cave is situated near the town of Reykholt, in west Iceland. It's not too far from the Hraunfossar waterfalls, and can easily be combined with a day tour around that area.

Víðgelmir's beauty mainly lies in its size and the spectacular colours on the inside, that can now be fully enjoyed due to a lighting system that's been expertly installed in specific locations. 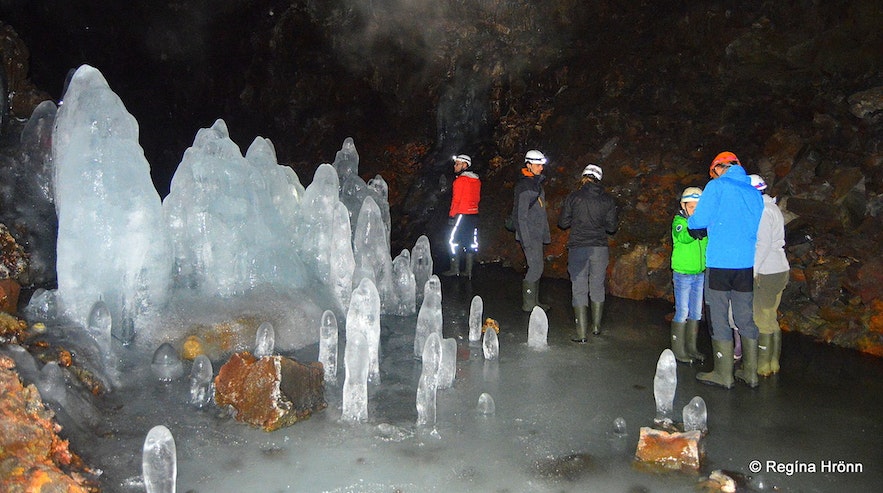 Lofthellir is a lava cave in North Iceland, situated in the lava field of older Laxárdalshraun.

The Lofthellir lava cave is renowned for having some of the largest, most varied and most beautiful ice sculptures of any lava cave in Iceland and spectacular lava formations as well. 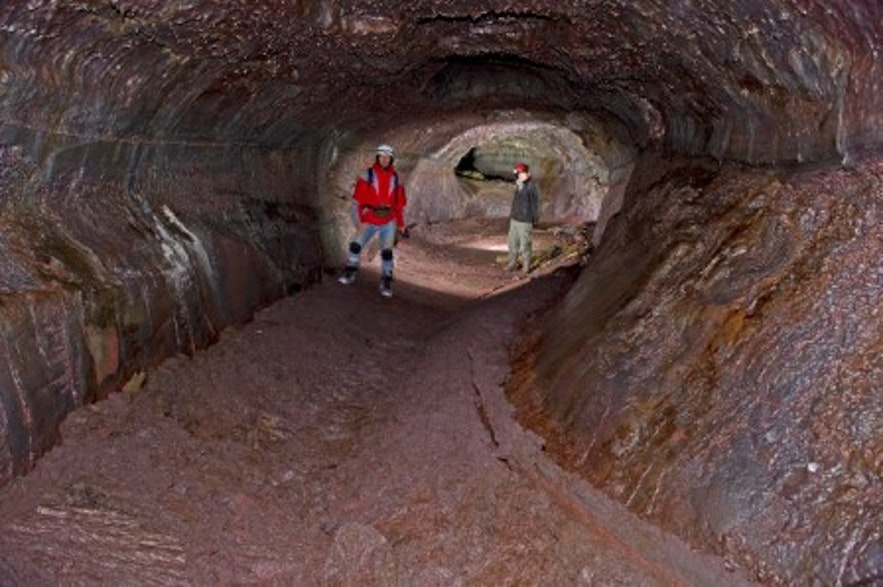 Búri cave is situated on the Reykjanes peninsula and was only discovered in 2005. It quickly became very popular, and in 2014 access to the cave was closed temporarily to protect the site.

Búri's size is 10 metres high, 10 metres wide in its largest chambers and 1 kilometre long. At its innermost section, there's a 17-metre deep vertical pit, made from a lava fall, the deepest lava pit on earth.

The entrance is narrow but once you enter you'll be inside a vast chamber where you can marvel at the cave's spectacular ice sculptures and formations. The ice sculptures are at their most marvellous in winter but the cave used to be accessible during all seasons before its closure.

Having climbed the cave's ice slope you'll go through a rocky tunnel about 700 metres long. Thereafter the floor is relatively flat all the way to the lava pit.

The closest caves to Reykjavík are Maríuhellar in Heiðmörk Nature Reserve, about a 15-minute drive from the city centre. Maríuhellar caves are three in total and popular for locals to bring their kids to.

The most obvious one is Urriðakotshellir cave that’s close to the main road. It’s a large open lava tube in a large grassy lava opening and inside there is a small gap where you can see through to the sky.

The cave Gjabakkahellir is also considered a prime example of an Icelandic lava tube, offering breathtaking sights with its many beautiful lava formations and ice sculptures.

Gjabakkahellir—a.k.a. Helguhellir or Stelpuhellir ('Girl cave')—is a lava tube, located in the area of Þingvellir National Park that was formed around 9000 years ago.

You can access that on your own, just be sure to bring the right equipment, i.e. good hiking boots, warm clothing and a helmet with a head torch.

Did you enjoy our article about caves in Iceland? Are there any caves missing from this article that you think we should add? Tell us in the comments.